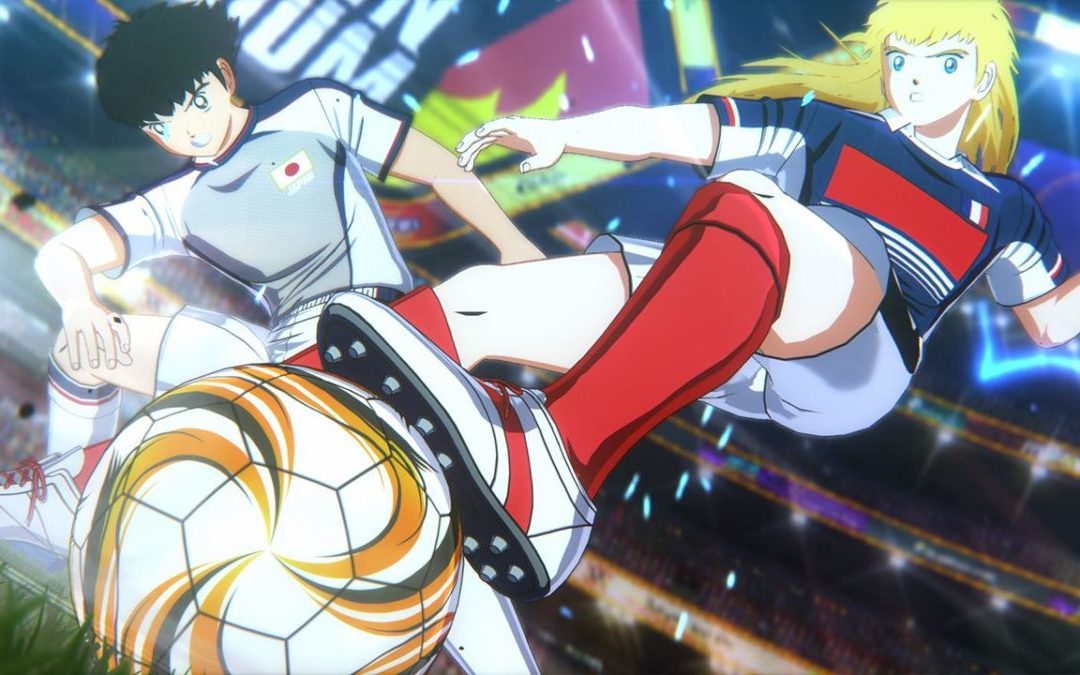 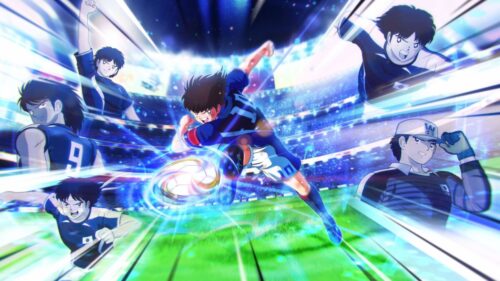 Is it just me who longs for those halcyon days of the early to mid-2000s, where sports games were a little bit more plentiful and varied than just realistic simulators? For someone who was raised on a strict diet of FIFA Street 2 for the PS2 and Disney Sports Soccer for the GameCube (two wildly different interpretations of the beautiful game), Captain Tsubasa: Rise of New Champions is a joyous blast from the past, despite its blemishes.

Based off of one of the most successful anime/manga franchises in history, Captain Tsubasa: Rise of New Champions is an incredibly welcome throwback to a more arcade style of football. Bigger shots with over-the-top cinematics, more flamboyant tricks and bone crunching tackles that wouldn’t look out of place in the WWE; all of these are present with Captain Tsubasa. For fans of Mario Strikers and other games of its ilk, Captain Tsubasa is definitely for you. 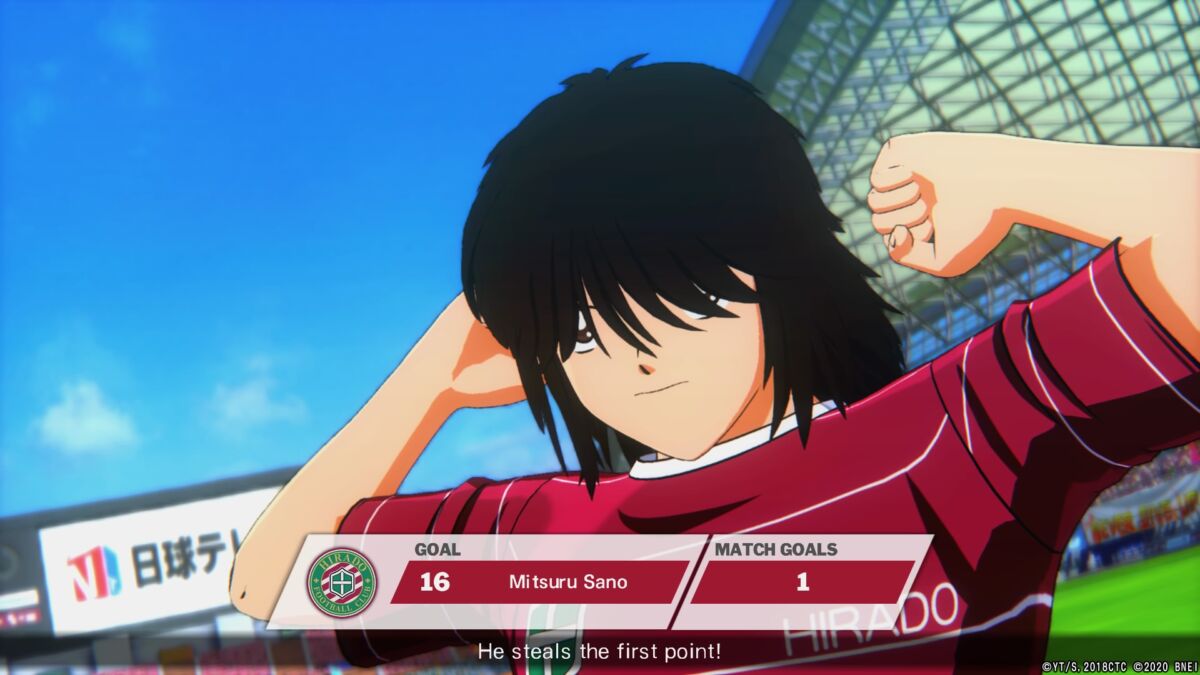 The gameplay is fairly easy to pick up and play, with simple and familiar controls that will appeal to footie fans and those who are looking to experience the world of Tsubasa through another medium. X is for ground passes, circle and triangle controls long passes and through balls respectively, while square is for shots and R1 controls sprinting. If you’ve even so much as looked at FIFA, these controls should be easy to get to grips with.

The key difference is that Tsubasa doesn’t rely on precise physics in order to dictate whether or not passes or shots work. The main factors for success are power and positioning. Whether passing or going for goal, players hold down the button while picking a direction to fill a bar, with more filled bars meaning more powerful shots and passes. However, you don’t need to worry about hitting the ball too hard when making plays for the most part. Usually, if there’s nothing in your way when passing or taking a shot, it’ll reach the intended target, though that’s sometimes not the case. 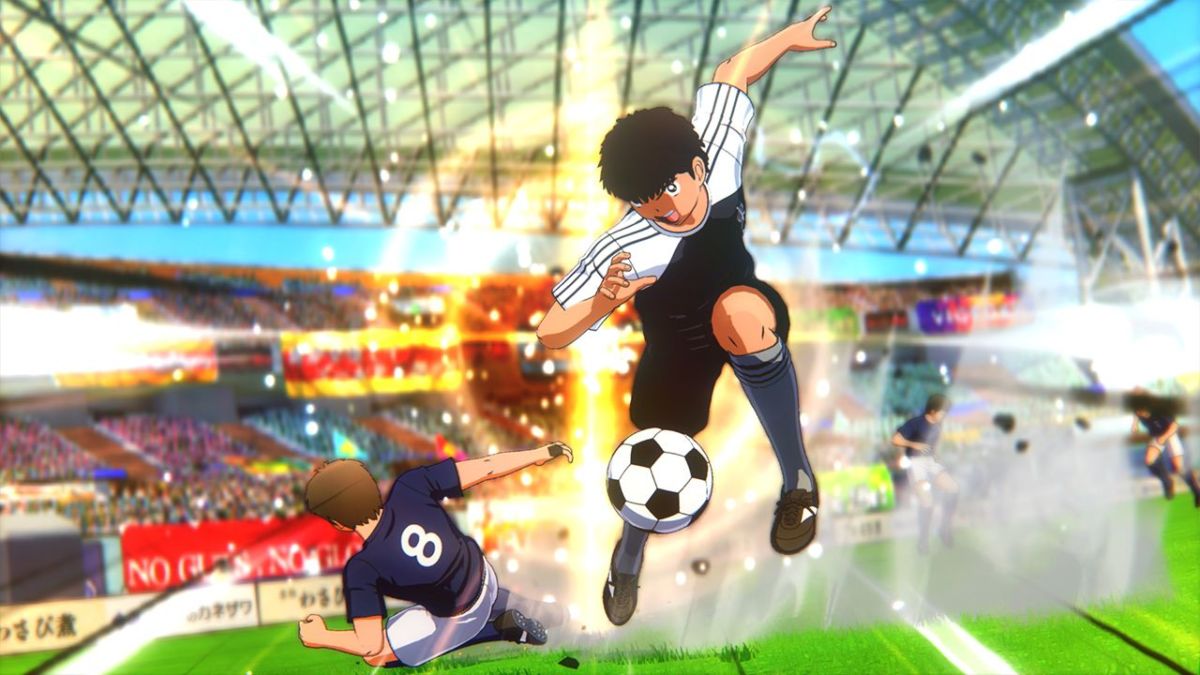 Unfortunately, charging shots requires plenty of time and space as you can easily get tackled while charging. In order to mitigate this, you need to play super aggressively, dribbling past defenders using R1 to dash dribble, or R2 to perform a short step forwards that’ll sidestep the opposition when you come into contact with them. For every two players you beat, you’ll get a short, special cutscene and a boost to your player’s stats that allow you to make the shot quicker, usually with the benefit of more space.

As a defender, you can use R1+X or R2 to try and perform different tackles to retake possession. Defending either results in a shoulder or slide tackle, and while I’m still not super clear on how ditching defenders seems to work consistently, R1 should allow you to skip past slide tackles while R2 is used for other kinds of tackles. A player’s stats also come into play, of course, but this seems to be the general rule of thumb. 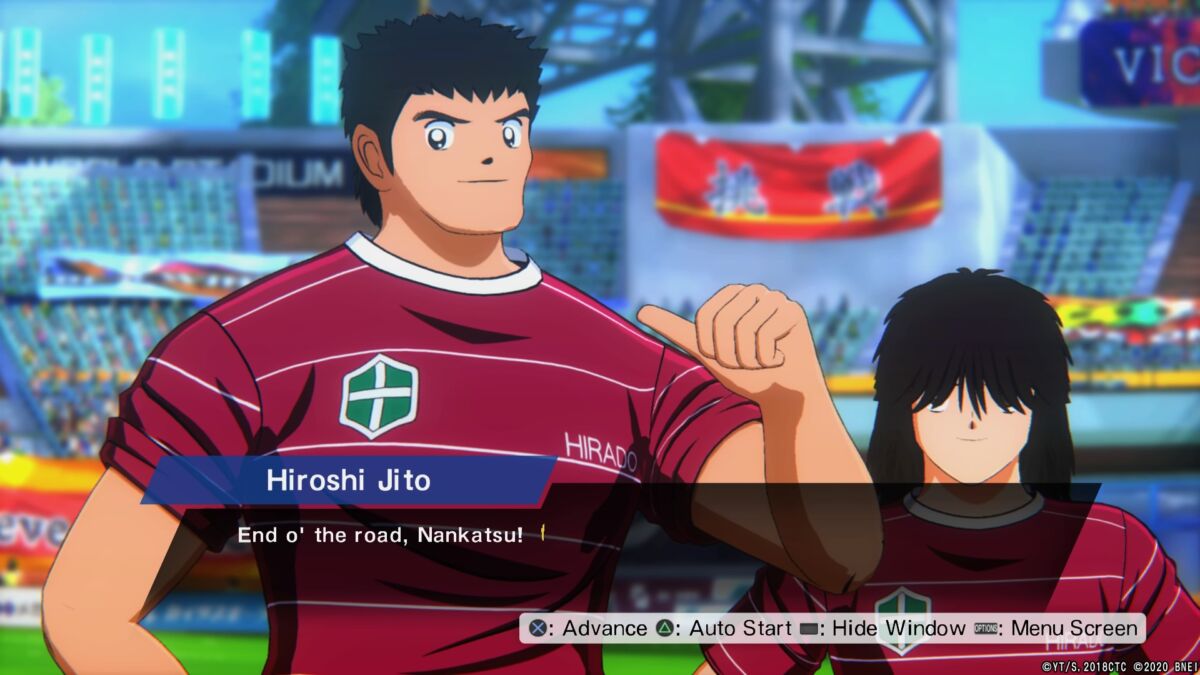 Once you’re finally in front of goal or 30 yards out (the game doesn’t seem to care either way), charging your shot bar to maximum will unleash a super shot, complete with a huge cutscene that sees the ball set ablaze, or summons the spirit of a Falcon. It’s about as anime as it gets, but it’s made funnier when you consider that it’s a series about football and not aliens beating the crap out of each other, like Dragon Ball.

Captain Tsubasa: Rise of New Champions’ style of play is incredibly enjoyable, with the dribble and shot mechanics encouraging a fast-paced, aggressive form of play. There are additional tactics you can activate mid-match and the ability for super aerial shots when crossing from the wing if you want to get a bit more technical, but for the most part, it’s a quick bit of simple fun – and that’s fine by me. 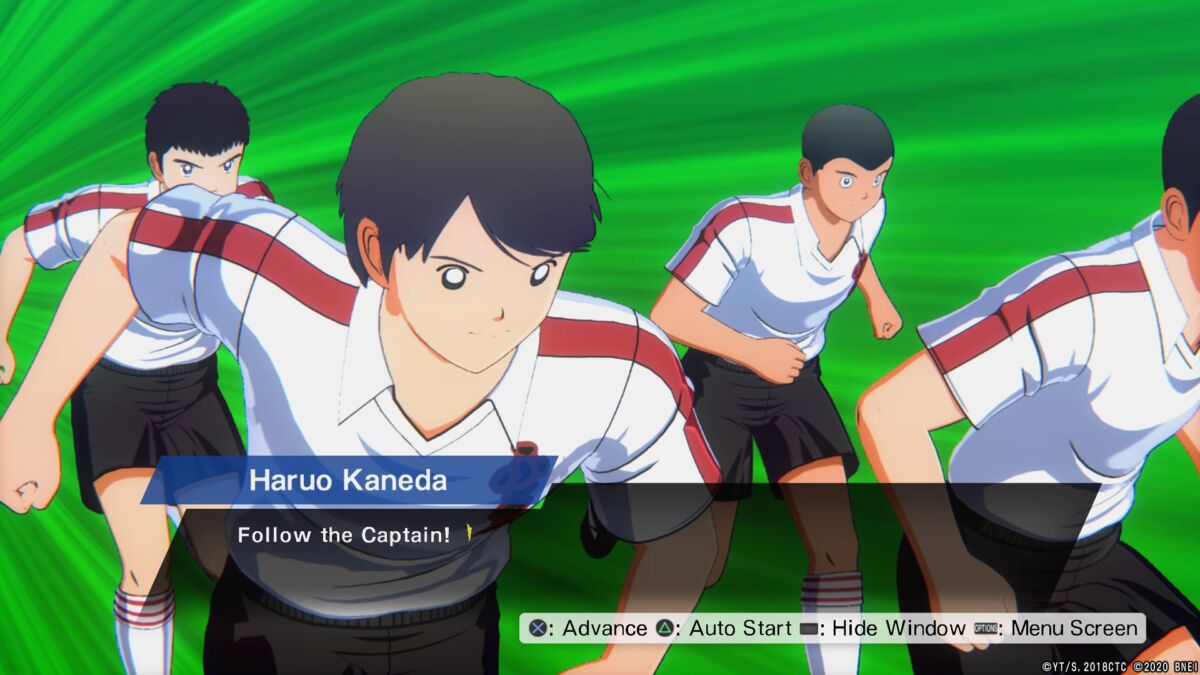 Still, there’s plenty of undeniable flaws. It’s a retro throwback, sure, but sometimes those tend to be “warts and all” deals. For all its positives, Tsubasa has a few warts. Passing play feels a bit stilted, as certain players stand waiting for the ball to come to them, spaced out like they’ve been hypnotised. Naturally, they’re easy prey to be tackled or intercepted. Through passes in particular are also quite underwhelming, as it can be a struggle to get players to claim a ball out in the open. Often, you’ll need to hit the sprint button to run towards the ball, otherwise the player might get other ideas and run off.

The game’s tendency of auto-switching players is a bit jittery as well, as the game will often auto switch to another player on defense, usually when you’ve already closed the distance with another player. It makes defending more laborious than it needs to be, especially considering that the story mode often puts you against teams that are more accomplished than you are. 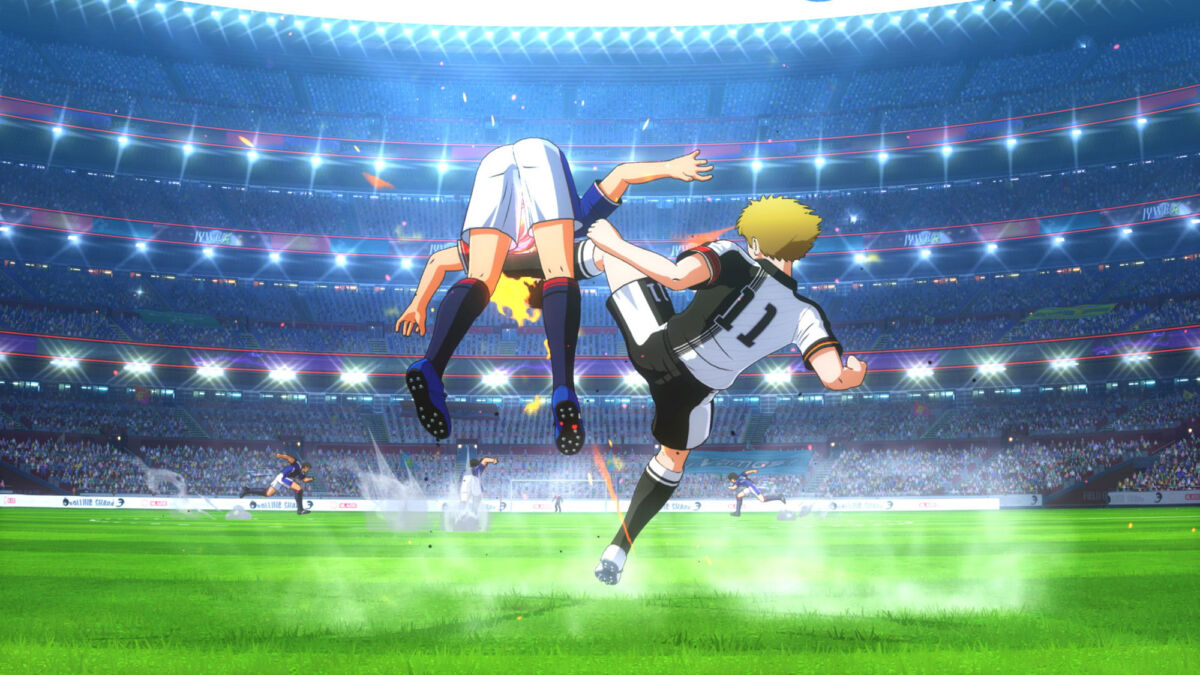 Speaking of which, the story mode is a pretty decent offering with two main modes. Episode Tsubasa offers a fresh take on the events of the series as you control Tsubasa himself and the Nankatsu MS football team as they try to win their third straight National Middle School Tournament.

Here, you’ll play a series of story matches, with plenty of cutscenes in between, that attempt to recreate the events of the source material. Special events will even trigger depending on certain conditions being met in the match. It’s a great way of introducing yourself to the game’s mechanics as it includes tutorials, but the story events mid-match can be a bit intrusive. Fail to intercept a pass to the wrong player and suddenly you’re a goal behind, scrambling to mount a comeback. 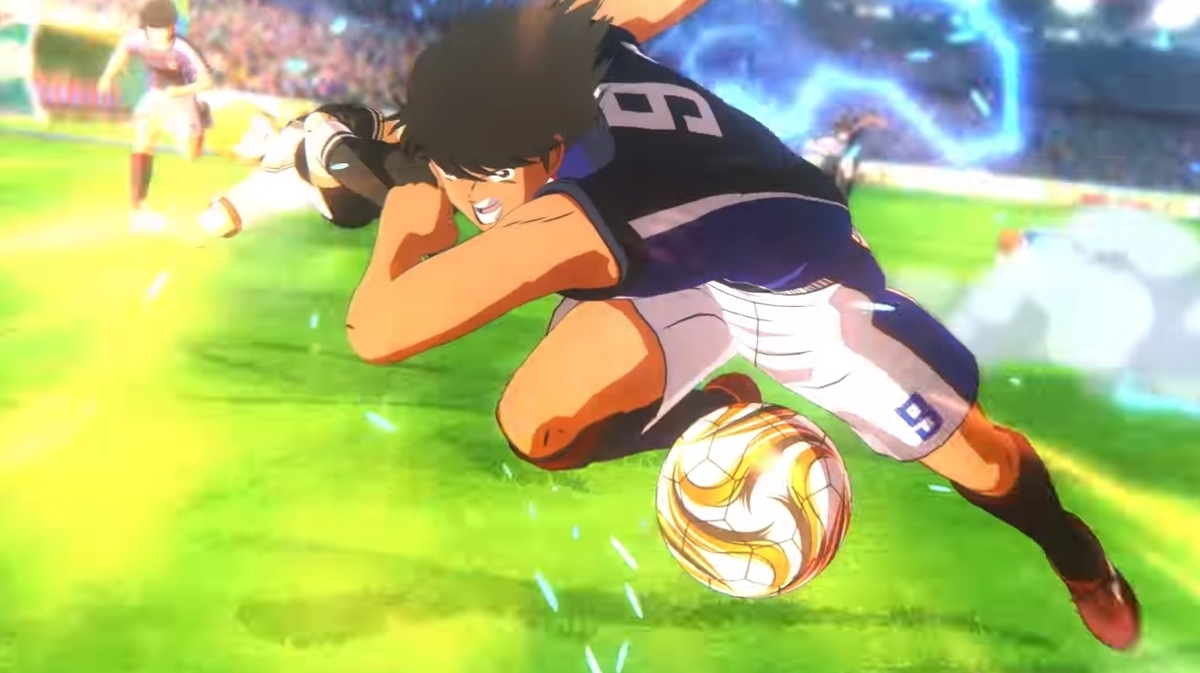 The other mode, Episode New Hero, is a brand new tale featuring your own created character, where you join one of three prestigious football schools with the view of winning a new tournament and earning the opportunity to represent Japan on a national level. It seems like a bit of an anime game staple these days for your own character to be inserted into the game, but Tsubasa is pretty good in its own right.

As you can join one of three different schools, playing in either defense, midfield or striker, there’s plenty of replayability on offer, especially so considering that more international teams become available to play against once you’ve completed the mode, and there are a couple of different outcomes to unlock with regards to where your player can get scouted to. Whether it’s worth another playthrough is another story as I felt that one was sufficient enough, but for completionists, there’s a lot to offer.

As for the actual nuts and bolts of the mode, you’ll play the matches as usual, but you’ll try to forge friendships with the different players from the anime in between. The friendships themselves are complicated, as you purchase card packs from the in-game store (no microtransactions, don’t worry) which contain player cards. Before each match, you’ll pick from a random group of 5 players from your card library and you’ll advance your friendship with those players, unlocking new moves and skills as you go.

You’ll also be able to make dialogue choices in certain moments, but for the most part, the choices simply range from encouragement to dickhead and don’t appear to have any immediate benefits or pay-offs with regards to the plot. It’s a good attempt at combining the football gameplay and relationship building aspects, creating drama on and off the pitch, but perhaps the game would have been better served emulating the likes of Persona, allowing you to have more choice on who you want to engage with in between key moments.

While there are problems with Captain Tsubasa: Rise of New Champions that are clear as day, the core package is rock solid, just like an Evertonian’s chances of being disappointed once the Premier League kicks off again (sorry, Jimmy). If nothing else, Rise of New Champions made me want to actually get invested in the Captain Tsubasa source material, so that’s a success as far as the game is concerned, surely.

A copy of Captain Tsubasa: Rise of New Champions – Deluxe Edition was provided by Bandai Namco for the purposes of this review. 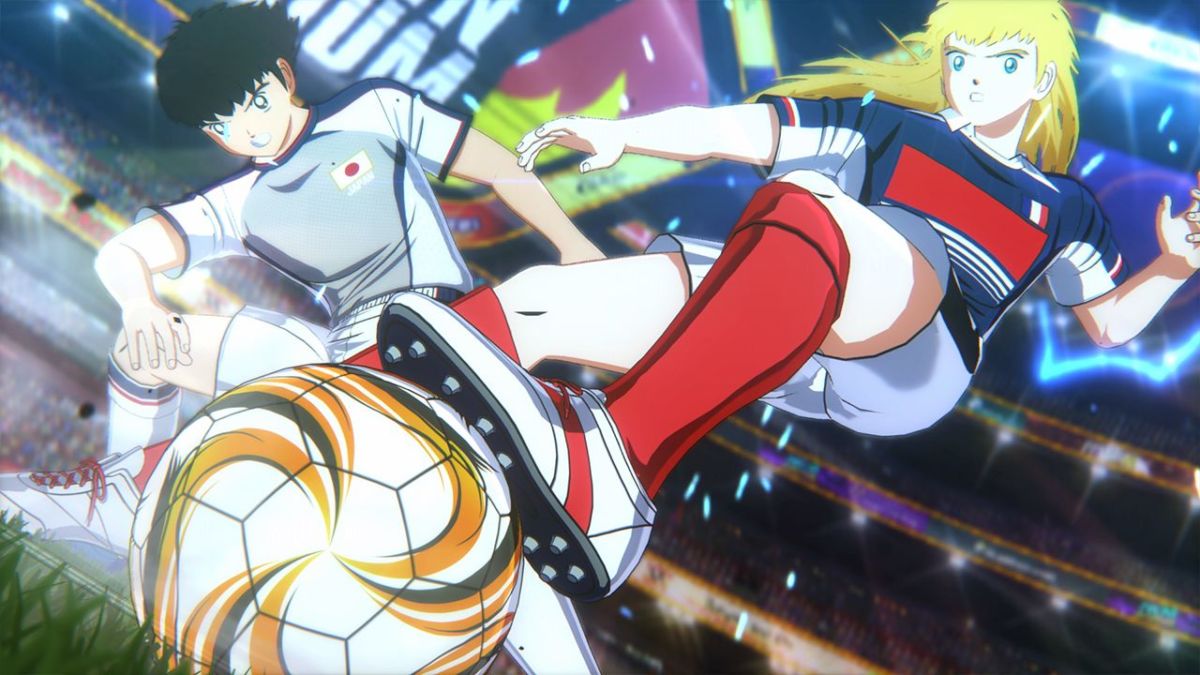 Verdict
Captain Tsubasa: Rise of New Champions isn’t a perfect rendition of the beautiful game, but it is a welcome return to an era of football games that don’t take themselves too seriously.
7.5
Cultured Vultures is a pop culture website established in 2013 covering all things gaming, movies, and more. We eat your words.
All The News On The Biggest Games