Can WWE Save Their Tag Team Division?

Where did it all go wrong? 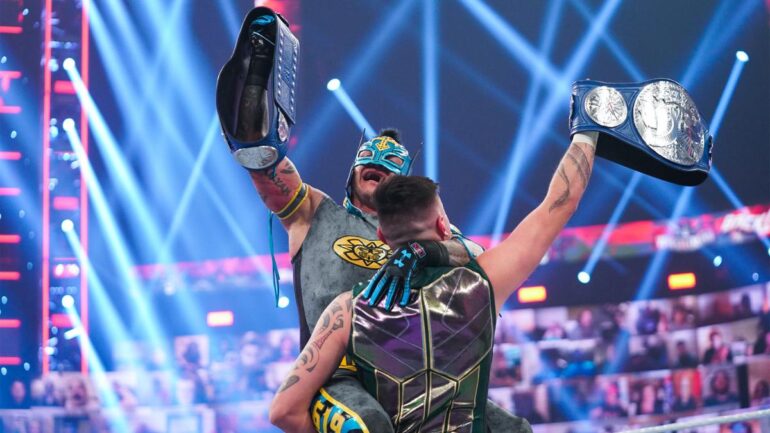 WWE have been giving the history of their Tag Team division a lot of attention on social media with the 50th anniversary of the original WWE Tag Team championships coming later this week. Throughout the week, WWE have put the spotlight on their respective current champions, with each brand’s title holders defending against some stiff competition.

Tag wrestling in its purest form is a thing of beauty, and in the past WWE have done a great job of putting together some excellent examples of 2v2 action. Just take a look back through the litany of matches between the likes of American Alpha, The Revival, DIY and The Undisputed Era and you’ll be treated to some of the best tag wrestling of all time, and that’s no hyperbole. However, despite the renowned success of NXT’s division, the main roster’s tag division remains in a state of ruin, a far cry from tag teams of old.

The WWE Universe have little to no interest in the stagnant Tag Championship scenes, with the belts being passed around between teams with no real effect. Whenever there’s been a slight glimmer of hope from a newfound team or NXT call-up, it’s soon been put to rest by tedious booking or a general lack of inspired feuds.

Where in the past there was a steady rotation between a wide variety of different tag teams, each with their own defining characteristics and individual fanbases, now there’s only a small handful of established teams that remain feuding against one another for the best part of the year. The fans are given no reason to care or get behind these teams, as they’re afforded barely any screen time to demonstrate their personalities.

Occasionally, a duo might manage to get themselves over to the point where they’re awarded more than just the standard 10 minute segment, but even this ultimately leads to them falling into meaningless 50-50 booking scenarios and towards the familiar apathy from the fans in attendance. The most recent example being The Street Profits, a team that originally seemed to be generating some momentum with their eclectic backstage promos and eventually their first RAW Tag Championship victory just before WrestleMania 36.

Perhaps if it weren’t for the pandemic, Dawkins and Ford might have been featured a little more prominently than they were, siding with whichever babyface was in the running for the WWE Championship and building on their connection with the audience to become one of the most marketable acts on the card, however now they’ve fallen so behind with a handful of significant losses to their name, there’s not much left to recover.

Similarly, the recently reunited Viking Raiders have also fallen by the wayside, despite their initial monster run upon their return. Erik & Ivar returned to pick up a couple of convincing victories on RAW, poising themselves for a future opportunity against current RAW champs, AJ Styles & Omos; it has now been six weeks since their last televised appearance. What happened? Did they step on the wrong persons toes backstage? Whichever excuse WWE are going to fall on, this has done no favours for the former RAW & NXT Tag champions as they attempt to once again find their feet in the ailing division.

Aside from random ragtag duos such as Elias & Jaxson Ryker, Dolph Ziggler & Robert Roode and the main-event tandem of Randy Orton & Riddle, there’s really not much going for either of the two main roster divisions. Fans have no pairings to gravitate towards, and if there’s no teams to really care about, or significant matches for that matter, what’s the point of having a division at all?

Bigger moments like the first-ever Father/Son Tag Champions being crowned have been completely squandered, where Rey and Dominik’s win could have easily made for a spectacular WrestleMania highlight. Any Tag Title seems so second-rate compared to more memorable title wins by the likes of Booker T & Goldust and Team Hell No, the belts are merely props for the flavours of the month to carry around with them as an excuse to be on television.

So, the question is: can WWE save their Tag Team division? After reviewing the two main roster shows, the short answer is no, there doesn’t seem to be any quick fix for the awful state of affairs. Without any meaningful, consistent booking, the WWE Universe will fail to look at the current roster of tag teams with any fondness, they will simply be filler in the three hours of equally monotonous content.

It’s a real shame considering the sheer amount of talent that have been made available to WWE on their main roster, with teams such as the aforementioned NXT Tag champions and more mainstream acts like The New Day, The Bar and The Good Brothers. If WWE actually put some effort into building the range of teams they currently have signed to their main roster, then there’s a chance that they could verge on the success of the Attitude Era. Just picture a well-booked Viking Raiders, Street Profits, Usos and New Day in a match akin to the TLC encounters between The Hardys, Dudleys and Edge & Christian. It would be insane.

As a huge fan of tag wrestling as a genre, it pains me to sit there and watch WWE continue down this sinkhole, if they truly are celebrating the 50 year history of tag wrestling in WWE, then they need to hit the reboot button and completely overhaul their booking system. All it will take it a little more time and effort into the storylines, and allow the duos some more screen time to show off what they can do without any creative limits.

But of course, this is WWE we’re talking about, so I’m not holding my breath.