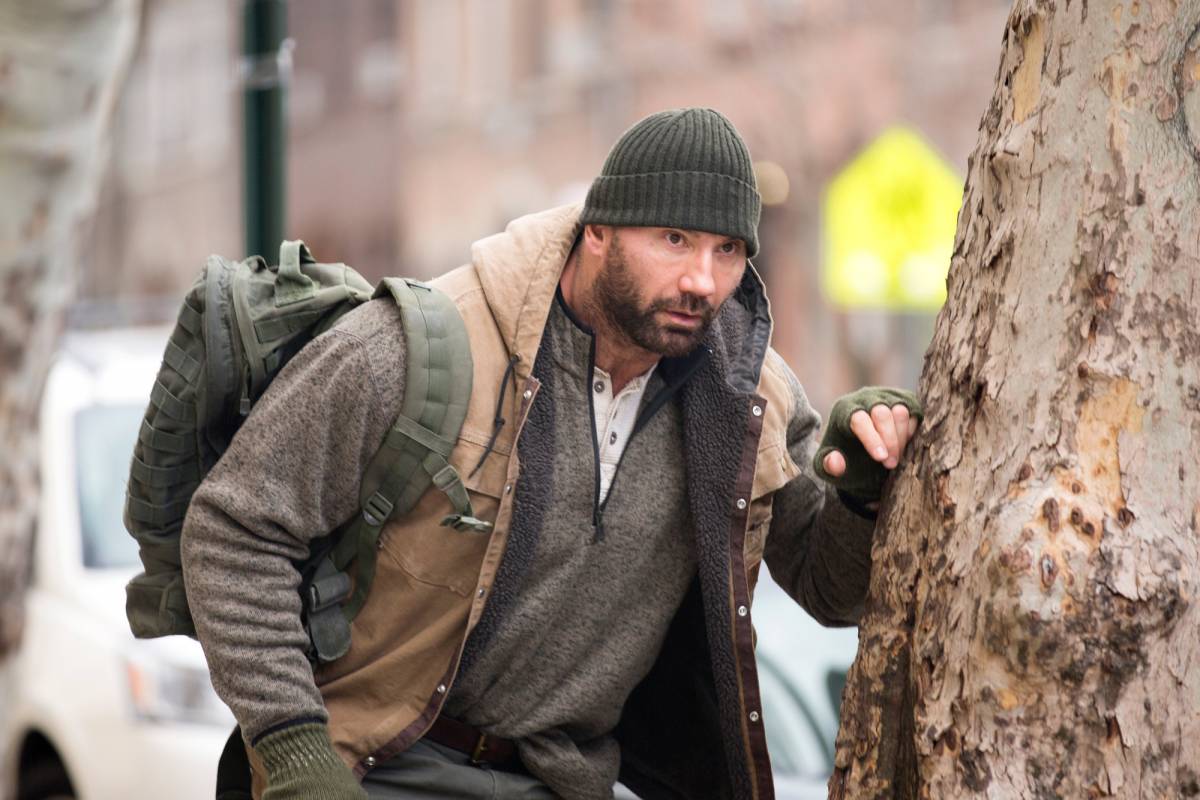 There have been movies before that have dealt with the theme of military invasion of the United States, positing the ultimate “what if?”. What if the US was invaded? How long would it take? Is it even physically possible with a country the size of the United States? Never could happen, right? Bushwick, from directors Cary Murnion and Jonathan Milott, tries to answer that question but from a slightly different angle.

After stepping off the train back home, Lucy (Brittany Snow) unwittingly walks into a war zone of gunfire and chaos from a domestic militia shooting on sight. See, Texas has decided to secede from the union, and upon gaining the support of a few other states, they’ve decided they’re taking the big apple next. After taking refuge in a basement, Lucy encounters Stupe (Dave Bautista), a war veteran who like her has a destination to get to and the good sense to get the hell out of town while he still can. Together they’ll traverse the numerous blocks of the titular neighbourhood while doing their best to survive.

Now on paper Bushwick sounds like a Red Dawn knock off, whereas it’s actually so much more than the Arnie vehicle (and a hell of a lot better than the horribly jingoistic remake from 2012). Whereas those sacrificed character development for action, Bushwick actually gives our characters time to breathe and grow. Lucy and Stupe begin as strangers and become solid acquaintances over the course of its 95 minute running time.

There are many things in this film that work. Instantly what sets this apart from your standard action-thriller is the way it’s shot. Long tracking shots follow our heroes as they traverse through many buildings and the war-torn streets, with very few cuts in the whole running time. It gives the film a wonderful from the ground-up feel, almost letting you see what our heroes do as it happens. The action is pretty non-stop but does have a few aforementioned pauses that let our characters have a few reflective moments together. This is where the film is at its strongest. It feels very The Last Of Us in parts which is by no means a bad thing. Just letting Bautista and Snow sit down and talk really showcases their talents effectively. They’re sometimes a little cliched, but it’s difficult to openly dislike. A scene in a laundromat is a particular stand out moment and will surely get you hoping for the final push for them to escape the city.

It’s also a much welcome change to see the enemies as a domestic threat in an American action film rather than foreign. As recent events have seen, the true threat to harmony in the States is from within, not from foreign soil. As welcome a change as this is however, it’s definitely underdeveloped and could have done with more time explaining why Texas has decided enough is enough and go gung-ho for the secession. Another complaint is the CGI in parts is poor but isn’t enough to detract from the overall package. When there are plenty of riot scenes and action set pieces that keep the whole thing rattling on at a fair old pace it’s hard to care that much about the odd duff moment of CGI.

Bushwick is an action-thriller that works at its best when there’s as few characters on screen as possible and its more intimate moments are allowed to shine. It’s by no means perfect, but is a solid effort that deserves to be seen and is definitely better than the sum of its parts. Bautista and Snow are particularly good and the scenes of the community fighting back are genuinely great. The ending is also surprisingly bold. Worth a rent.

Verdict
Bushwick isn't going to go down as one of the films of the year, but is a solid, well-made indie actioner with two great central performances and a different approach to your standard thriller fare. Well worth a watch.
7
Cultured Vultures is a pop culture website established in 2013 covering all things gaming, movies, and more. We eat your words.
All The News On Your Favourite Games