The lack of variety and a failure to really stand out among the stiff competition hamstrings Black Future ‘88. 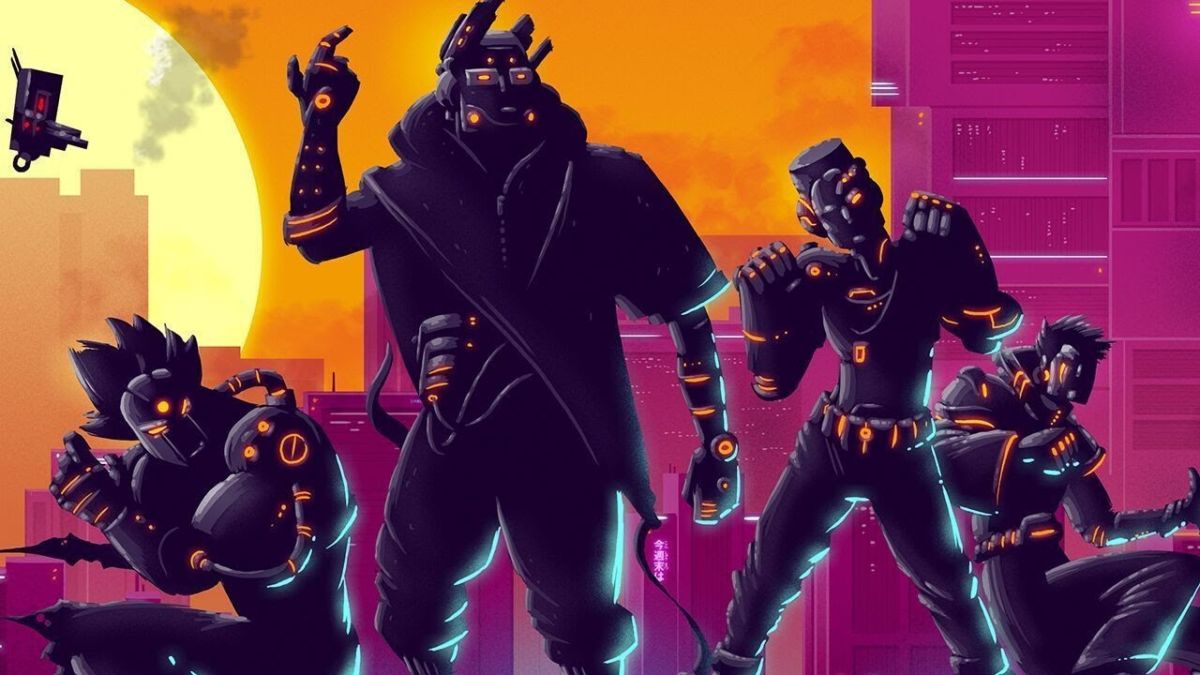 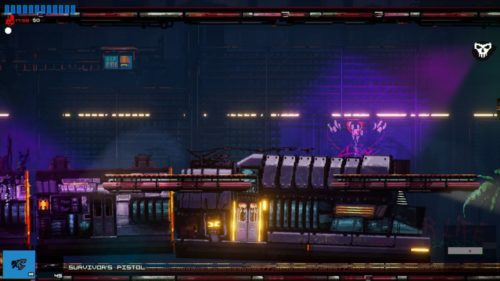 In Black Future ‘88 you run, jump, slash and laser your way through a pixel roguelike that is so steeped in 80’s nostalgia that it leaks Blade Runner synth. Unfortunately for developer SUPERSCARYSNAKES, that isn’t an all that unique combination these days. Indeed, you can hardly throw a stone at Steam without hitting something which doesn’t use at least one of those design elements.

This was one of my biggest concerns when I got my grubby little hands on a beta earlier this year. Since then, the 80s nostalgia train has been showing some signs of tapering off. We’ve seen a lackluster new entry into the Terminator franchise, a mediocre Wolfenstein title and a rather boring game called Generation Zero set in the same decade. Additionally, updates to Slay the Spire, Enter the Gungeon and Dead Cells have made them even better roguelikes with time. It’s a crowded market for the genre and Black Future ‘88 simply doesn’t do enough to stick out. 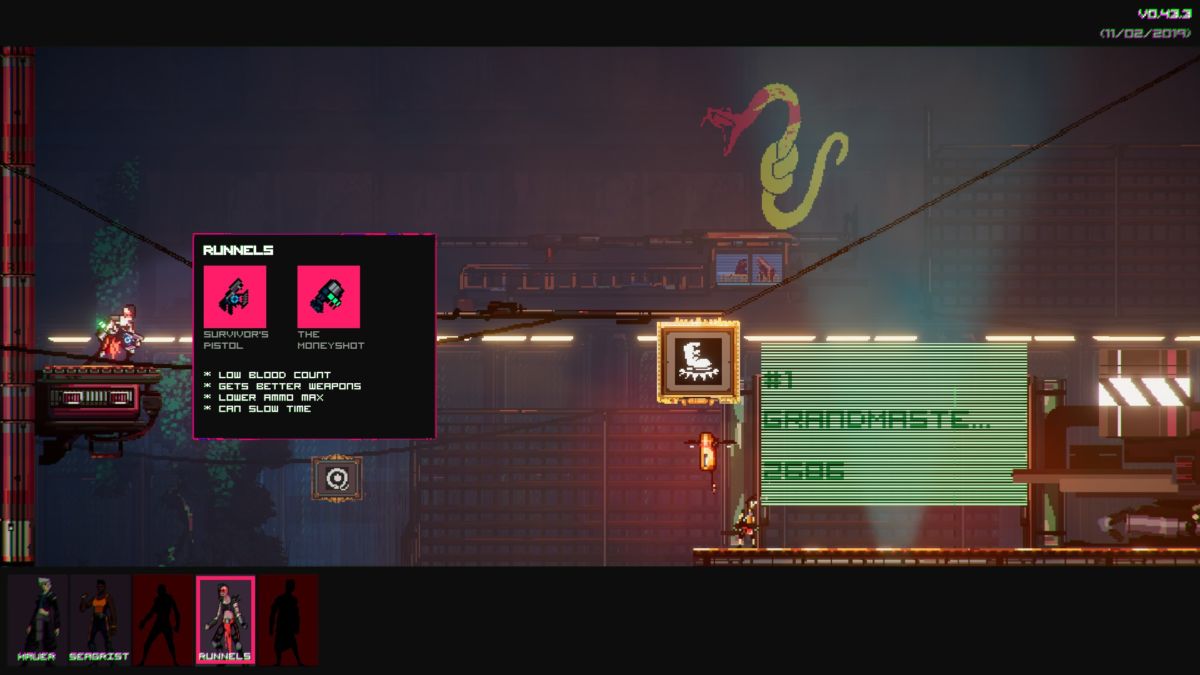 Like most roguelikes, Black Future ‘88 offers more of a premise than an actual story. People stopped keeping time after the nuclear bombs fell, and it has been 1988 ever since. Some guy called Duncan orchestrated the apocalypse, and it’s your job to take him down. To do so, you need to climb his AI-controlled tower called Skymelt in 18 minutes, or your heart will explode, because of reasons? While it might not be essential, I appreciate when roguelikes are filled with lore, even when it’s stupid. It’s therefore disappointing that Black Future ’88 has almost none.

On the other hand, Black Future ‘88 feels just shy of fantastic to play. Not as precise and elegant as Dead Cells, but not that far off either. The left analog stick handles your movements while the right one lets you fire in any direction, though you can use the auto-aim to kill the enemies while you concentrate on the platforming and movement. As you murder your way through the tower, there are two elements that make the combat in Black Future ‘88 great — speed and fluidity. 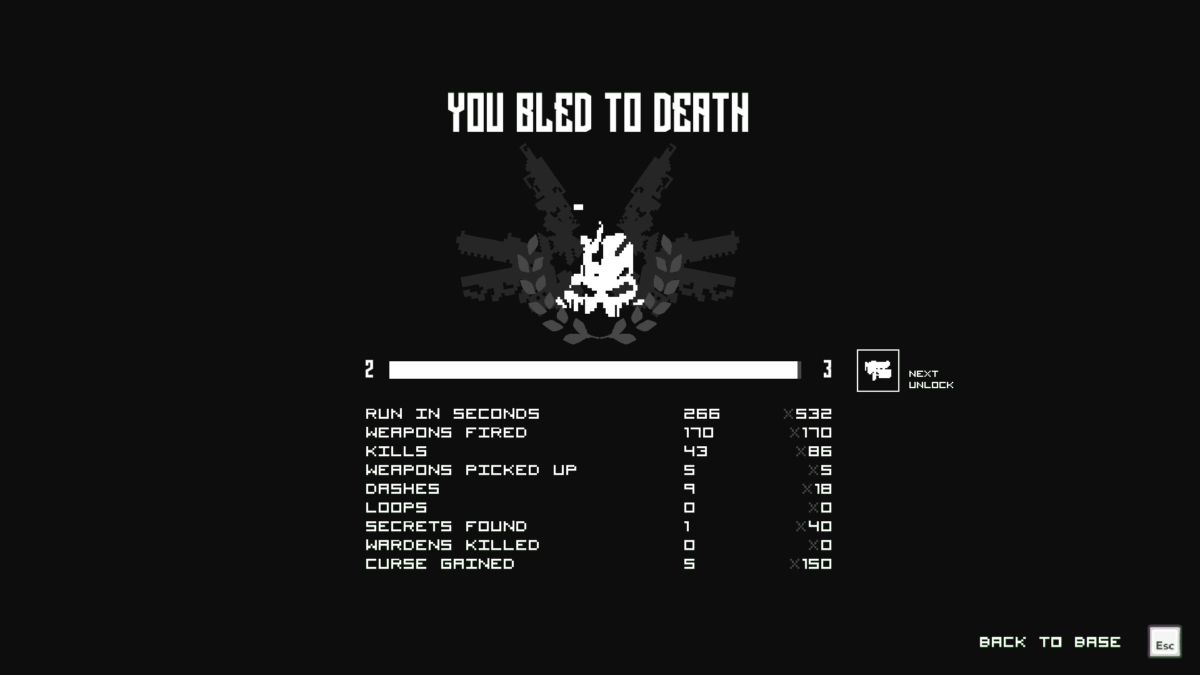 A lot of this comes from the pressure the time limit exerts upon you. Throughout the levels, you can spend your precious time on perks for your character. These perks can come quite handy, so you can’t be too stringent with your time, though that might be your instinct. Some are simple, granting discounts at stores or an extra bit of armor. Others are much more interesting and can grant you synergies with your weapons. For instance, a perk to dash through solid objects can synergize with a teleport weapon, making you a blur of destruction.

You also want to be quick to pick up cash and ammo from murdered enemies. Not only will it benefit you, but it also prevents the tower’s AI from using them instead. If you leave resources on the ground for too long, Skymelt will break them down and upgrade itself, which means that harder enemies will spawn and deadlier traps await you. Again, it’s a clever way of keeping you on the move and taking risks as you play. 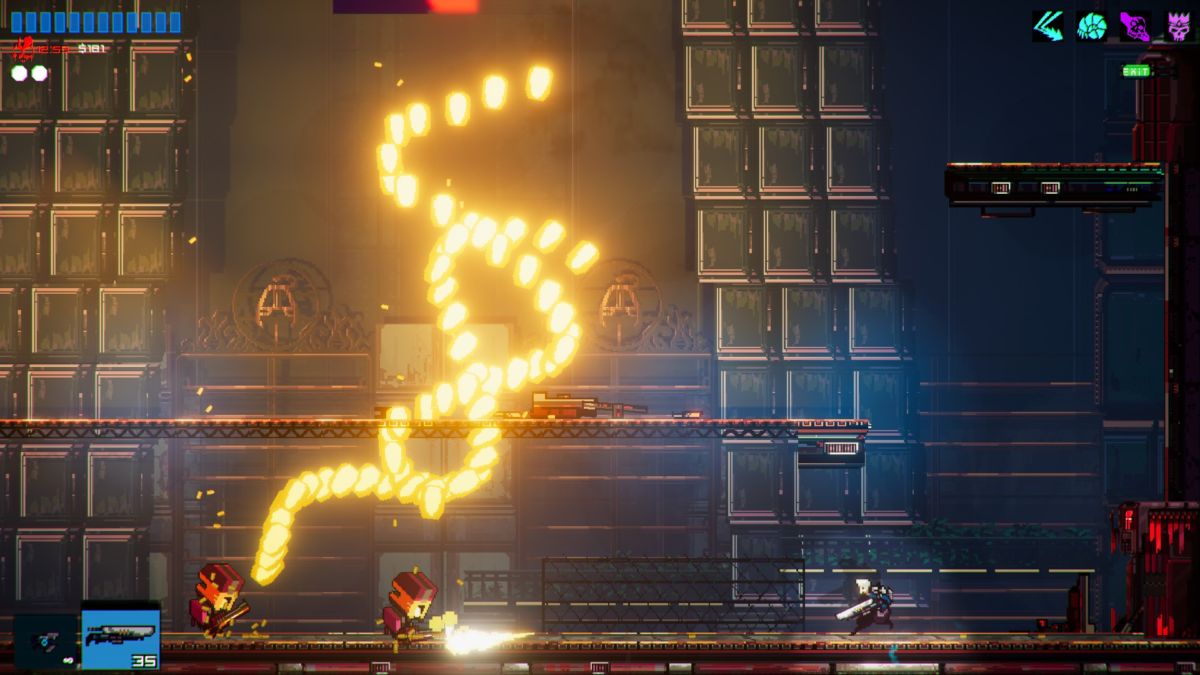 Moreover, it prevented me from sliding back into bad habits. Normally when playing a roguelike, I want to hang back and take things easy, assessing the situation before acting. The timer and the evolving tower mechanic prevents me from doing just that in Black Future ‘88. I have to always be on the move, picking up what enemies drop and pushing forward. The result is a combat system that is chaotic, fast and great fun to play.

A lot of the enjoyment I derive from roguelikes comes from unlocking new weapons and perks. It’s part of what makes the randomness of these games so compelling, and Black Future ‘88 is no different. As you die (and you will), you unlock new perks and weapons that have a chance of spawning in subsequent runs. Plenty of games have made use of similar systems, and Black Future doesn’t reinvent the wheel here either. 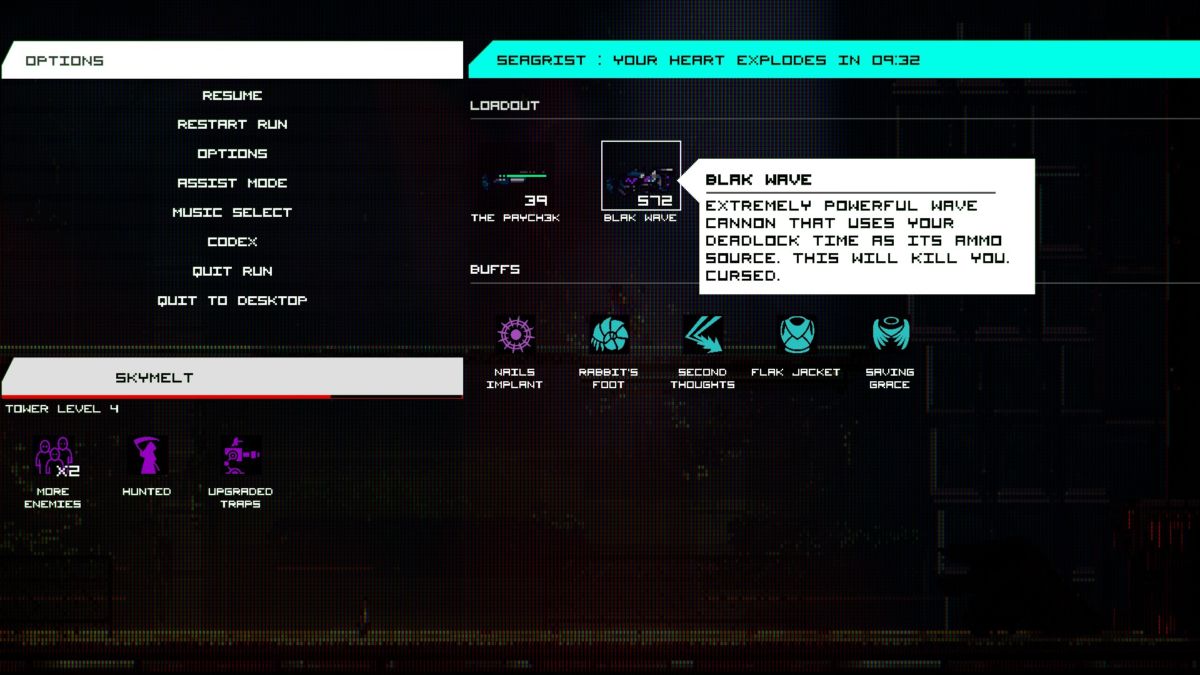 Unfortunately, the early hours of the game feel a bit bare. It takes several runs and multiple hours before you unlock anything interesting. You will find shotgun after shotgun with a slightly different spread or range, but the more unique boomsticks take some time to unlock. Likewise, new perks and characters also roll out rather slow.

Apart from new guns and perks, you also unlock additional characters. Each character has a unique starting weapon, and some even have inherent perks. These can be things like having more ammo or even the ability to slow down time. They go a long way to spice up the combat a bit once you have learned the basics, but I just wish there had been more of them to keep the action interesting in the long term. 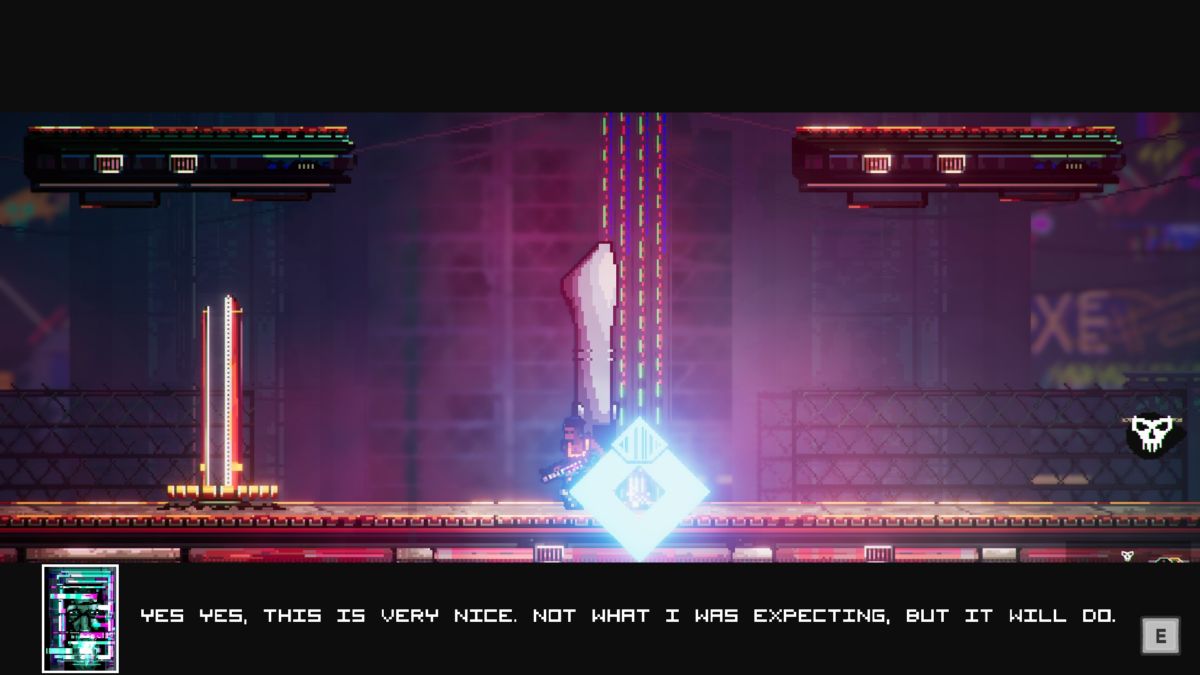 The real star of Black Future ’88 is the audio design. The synthy tunes are so well put together that it manages to cut through my growing fatigue of 80s inspired soundtracks. The bass is aggressive and heavy, and the synth is excellent. This, together with the overall visual design, makes me think of the cyberpunk anime from my childhood. It reminded me of old shows like Bubblegum Crisis, Akira and even some Cyborg 009. In short, it sounds fantastic. I also love the lo-fi voice samples used for Skymelt itself. Whenever it quips at me, I’m instantly back in an early 90s arcade, playing Sinistar and Black Knight.

Although the retro pixel aesthetic is becoming old at this point, Black Future ’88 manages to present some stunning visuals. It’s a bit hard to tell from static screens, but the graphics and effects come to life in motion. It turns out that making excellent use of explosions, smoke, and lasers goes a long way. Unfortunately, the same can’t be said for visual variety. Every area in Black Future tends to look like the first one. It’s pixel cyberpunk and industrial all the way to the top of the tower. Contrast this to a game like Dead Cells, which lets you explore a set of very distinctive looking areas, and you can’t come away feeling anything other than disappointed. 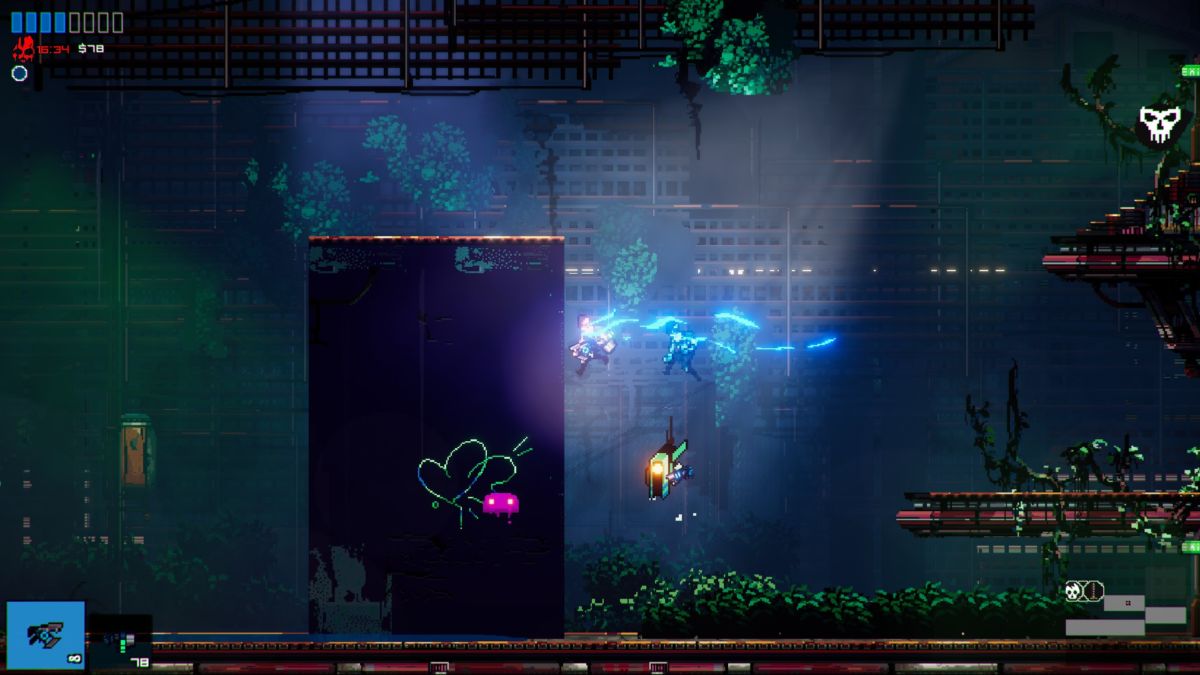 Black Future ’88 has me torn. It’s a very good roguelike with a fantastic soundtrack and some stunning visuals. At the same time, nothing in the game feels fresh or new. It’s a bit too little, too late. 80s nostalgia is everywhere these days, and I am probably not alone in feeling that it’s a bit overdone at this point. Additionally, the market for pixel platforming or side-scrolling roguelikes is quite oversaturated.

At its best, the gameplay can be fantastic and great fun, and I don’t doubt that had Black Future ’88 been released two or three years ago, we would remember it fondly and perhaps even throw a few awards at it. As it is now, it’s merely one in a sea of hundreds of similar titles. It’s a very competent game, but nothing new or revolutionary. Unfortunately, it means the few new things Black Future does bring to the table lose a lot of their impact. That said, roguelikes have a tendency to improve over time, so perhaps the same will be true for Black Future as well.

Verdict
The gameplay is good and the music is fantastic, but the lack of variety and a failure to really stand out among the stiff competition hamstrings Black Future ‘88.
7