7 Best Zombie Movies on Netflix You Should Watch 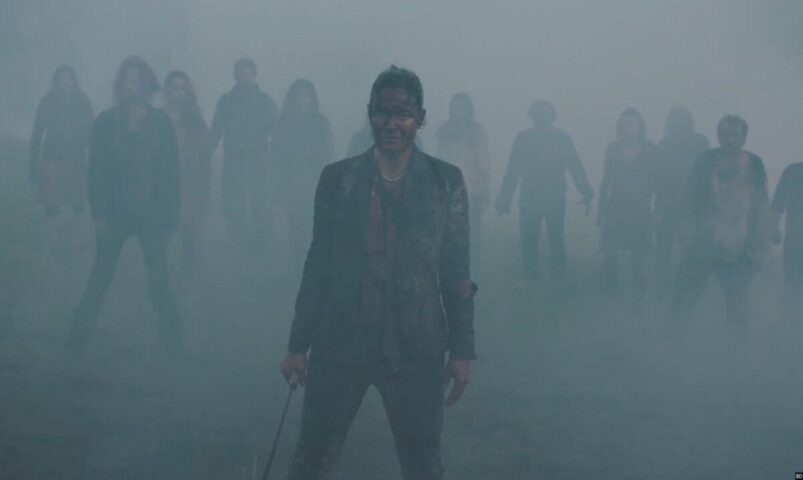 With literally thousands of movies to choose from, you’re never going to run out of zombie movies to watch on Netflix. If you’re looking for a few of these to check out on Netflix in particular, you’re going to have at least a few living dead classics to choose from.

Unfortunately, Netflix doesn’t have the deepest library of zombie movies. If you’ve got the means to visit Netflix in other parts of the world, your selection might improve. Nonetheless, a quick visit to the site will show you an array of choice as sparse as the presence of humanity in Monroeville Mall.

Still, don’t remove those planks of wood from the front door, inviting the hordes of undead to come inside and snack on your extremities.We’ve got you covered with a ranking of the best zombie movies to check out on Netflix. There’s just enough good stuff to satisfy even the most dedicated fan.

Hey, did you know there’s two remakes to George A. Romero’s classic 1985 film Day of the Dead? No? That’s okay. A lot of people seemingly don’t.

Romero’s seminal zombie works have been remade many, many times over the years. Night of the Living Dead alone has a couple dozen. Most of these remakes are not particularly good, but your value may vary. Particularly if you’re someone who likes zombies in any form, regardless of the quality of the film itself.

That doesn’t sound like Day of the Dead: Bloodline is very good. In terms of characters, pacing, and actually being scary or unsettling, it isn’t. The story concerns a young medical student named Zoe (Sophie Skelton) who finds herself just one of many people trying to survive a hellish zombie apocalypse. The movie sticks to this premise and is decidedly unpretentious about what it is. If you’re looking for a zombie movie that boils down to zombies (called “rotters” here) killing and eating everything with a pulse, you may enjoy Bloodline for the most part.

While Sophie Skelton shows more than enough talent for this weakly-developed character, and while you want to like the cast of weary, often annoying humans she finds herself with, it’s a tough hill to climb. Day of the Dead: Bloodline features some of the most unlikeable characters ever brought together for a zombie movie. This is where the writing really suffers, and not even the occasionally impressive action set piece can save this thing.

Set against the backdrop of the Mexican Civil War, Ladronas de Almas tells the story of a group of embattled outlaws who see an opportunity for wealth within the confines of a family compound that has been mostly abandoned. All these insurgents find upon arrival is the compound’s owner, his daughters, and a single servant. The movie sets itself up nicely as the kind of heist movie where we know something is going to go terribly wrong, but we can’t say exactly how that’s going to unfold.

What unfolds is one of the more surprising entries on this list. While Ladronas de Almas takes a little too long to get going, and while the ending doesn’t measure up the excellent tension that develops as this goes on, there is a lot to enjoy here.

Ladronas de Almas should be said to have a heightened sense of its own energy. It can sometimes feel like almost everyone’s idea of a soap opera taking full advantage of feature filmmaking dynamics. Even the camera movements in the film, also known as Soul Robbers, are going for something grand and consistently dramatic. It’s an enjoyable approach to this material, which utilizes a slightly different, but no less satisfying, form of zombie.

Supported by a strong cast, particularly in the family who lives at the compound (Sofía Sisniega stands out as one of the daughters), Ladronas de Almas deserves a lot more recognition than it’s received thus far.

It’s easy to assume that a reboot to an awful 2005 action-horror mistake would be some kind of depressing afterthought. However, what might strike you as another tax shelter for the VOD market is in fact a better-than-average adaptation of its video game source material. Doom: Annihilation has the benefit of very clearly being made by people who have actually played one of these legendary video games.

Doom: Annihilation is extremely straightforward, almost too much for some. Others are going to appreciate that this movie starts strong on the premise of marines investigating a military base that has mysteriously gone offline. The investigation reveals a device that has connected to a realm that may be extraterrestrial, actual demons from actual Hell, or somehow both. This is the part of the movie you’re no doubt waiting for, and Doom Annihilation doesn’t waste a lot of your time getting there. Again, this is a very specific type of action movie that just also happens to feature demons, imps, and a horde of zombies for good measure.

The special effects in this movie are solid, but you can’t help but wish this film had been given just a little more money. What’s here is a fun rainy-day movie, and it’s hard to imagine anyone not being impressed by Amy Manson’s phenomenal lead performance.

Benefiting greatly from the inherent spookiness of Quebec, Ravenous is a strong piece of storytelling and character-driven horror. The zombie element is equally impressive, as it’s essential to what’s being shown to us in this film about a wave of zombies in a rural Quebec village. This is one of the purer examples of an indie drama featuring zombies.

Ravenous has some good flashes of what you’re expecting from a zombie movie. Where the film distinguishes itself further is in its depiction of this village’s destruction. There isn’t some larger metaphor about the dissolution of society itself. You can read that into the proceedings if you like, but this movie just gets its dramatic punch from watching a largely likable group of people in a small community find their lives destroyed wholesale. The movie doesn’t force us to sit through the pre-stages of this zombie outbreak. It’s already happened. The world is different, and people have no choice but to hang on.

Sometimes, that’s really all you need. The movie’s cast, running on effective performances by Marc-André Grondin and Monia Chokri, is also a big part of why this movie has such a notable atmosphere of dread. Everyone has excellent chemistry, connecting to one another in a way that only enhances how intensive Ravenous gets at times. The ending may not have any huge surprises to zombie aficionados but it’s more likely than not you’re going to wish you had seen this one sooner.

Fresh from a series of superhero movies some of us didn’t particularly enjoy, Army of the Dead returns Zack Snyder to a particularly satisfying form and subject matter.

Snyder’s Dawn of the Dead remake is still regarded as one of the best horror movies of the 2000s, as well as one of the best remakes of all time. Coming back to zombies with a movie functioning as a style-over-substance marriage between Ocean’s 11 and Aliens seems like a good occasion for all interested.

While nowhere near as bold and arguably brilliant as 2004’s Dawn remake, Army of the Dead stacks the deck for an experience that’s fun most of the time. This fun comes down to endless packs of zombies, some of which are considerably stronger than others, and Snyder’s singular flair for elaborate action sequences. The choreography and production design go a long way towards keeping this movie up when its plot starts to meander in a noticeable way.

Of course, the sprawling, entertaining cast of oddballs and fun criminals is the other secret weapon of Army of the Dead, who are led by a very-good Dave Bautista, as well as strong performances by Ella Purnell, Omari Hardwick, and Garret Dillahunt as the kind of guy you probably shouldn’t trust. The overall style of this movie can be exhausting, particularly the constant use of what is known as shallow focus. This refers to the process of keeping one part of an image in focus while blurring the rest, and we can only hope you enjoy it as much as Snyder seems to.

Cargo is based on a tragic, touching 2013 zombie short film by Yolanda Ramke and Ben Howling, who also expanded upon that work to create this full-length feature. This movie is also one of two entries on this list that could conceivably be interesting even to those who don’t generally like zombie films.

The original short gets a lot of its power from not only what we see on screen, a father coming up with a plan to protect his infant child in the midst of a full-blown zombie meltdown, but from what we imagine, as well. That part naturally gets lost in a full-length endeavor, but what the film adds to as far as this story is concerned works well.

Martin Freeman and Simone Landers are each fantastic as the parents who must survive this terrifying new world while protecting their infant. This is good casting for a story that consistently juggles telling an emotional story with keeping the zombie thrills rolling along. Cargo rarely loses the focus that sometimes becomes difficult to manage with a film like this.

Cargo gives us characters that are easy to care about. That doesn’t always matter in a zombie movie, but it’s pretty important for a film like this. The ending is one of the strongest of anything on this list of the best zombie movies on Netflix/

Even if South Korea didn’t seem to be the place to go for the best zombie movies being made today, #Alive would still be a standout.

A young video game streamer named Oh Joon-woo (Yoo Ah-in) finds himself isolated and without much in the way of supplies or even hope, as zombie chaos overwhelms the world around him. Things go from bad to bleak over a slow descent into madness and a growing sense of overwhelming loss. The zombie brutality in this film is sharp and well-made throughout, serving to further strengthen this story of an individual suddenly trying to connect to the living world.

#Alive may or may not be a commentary on technology and its relationship to individualism and isolationism. That’s up for debate, but few can argue that this movie’s main point relates to the immeasurable value of having someone there with you and being there for them in turn. For both practical and emotional purposes, it’s apparent that Joon-woo’s life only finds hope when he finds another living soul nearby (Park Shin-hye in an astonishingly nuanced, strong performance).

#Alive has ample suspense to make all the above elements that much more striking. The human element will always be there to help make a zombie movie be more than just a kill-fest if that’s what it wants to achieve. Movies like #Alive remind us that there are still original ways to explore that, without losing the other aspects of zombie cinema that we all enjoy.

READ NEXT: 10 Worst Netflix Original Series of All Time