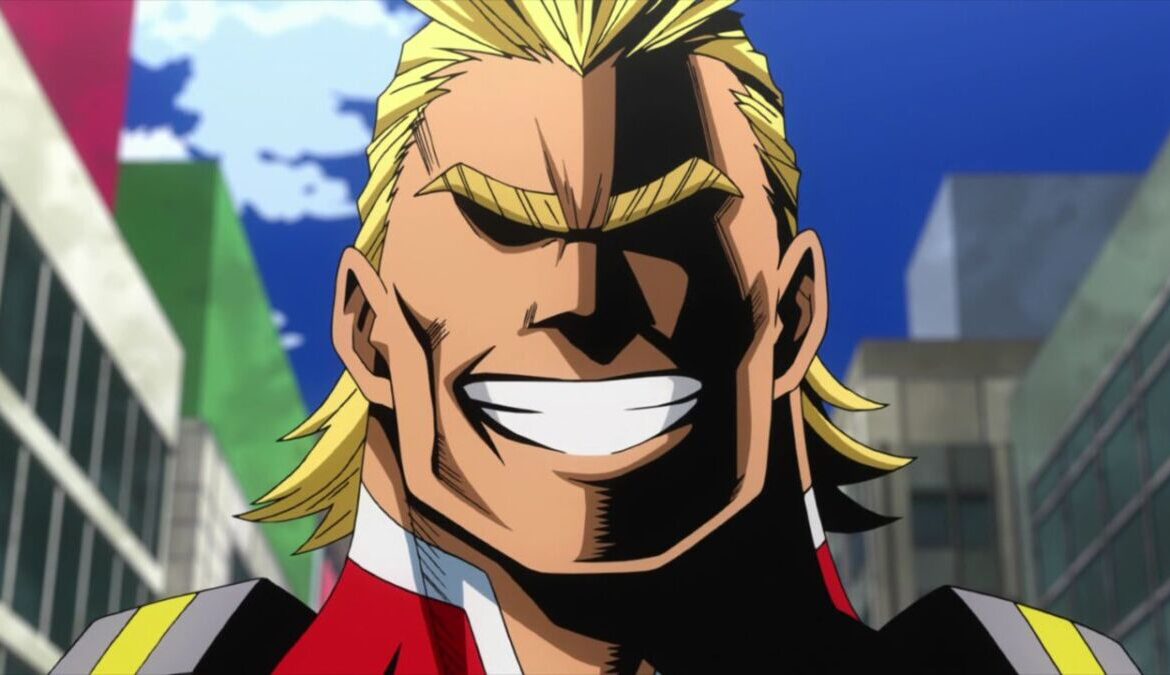 My Hero Academia is a super popular anime from the last few years that’s many seasons deep. The show makes a great addition to the superhero genre, which is still as popular as ever.

My Hero Academia follows Izuku Midoriya, a boy who has no superpowers in a universe where most people have them. Still, he wants to attend the prestigious UA High School, where he hopes to train to save the world and become a hero.

Fans of My Hero Academia are eagerly waiting for a new season to release. Luckily, there are many other anime like My Hero Academia to enjoy in the meantime. Whether you’re looking for another shonen-style anime, something to do with superheroes, or just an anime in a school setting, the list below has something for you.

Obviously, we have to start this list off with a shining example of superhero anime. One Punch Man began airing in North America in 2016 on Toonami, and it has everything that fans of My Hero Academia could ever want, including superpowers, superheroes, comedy, and tons of action.

While the two anime have many similarities, the main characters of each show couldn’t be any different. Saitama, who’s known as One Punch Man, is a hero so strong that he can defeat any opponent he faces with only one punch, hence the name of the anime.

While this makes for an absolutely OP superpower, Saitama has become bored because of the lack of challenges for him to face, even in a world filled with other superheroes. The comedic aspect is evident as viewers watch Saitama’s relaxed attitude throughout his everyday life and during epic fights.

Follow Saitama as he desperately searches for any opponent or enemy worthy of his great strength. This show is a must-watch for those looking for an anime like My Hero Academia.

One Piece is another iconic anime, although it isn’t about superheroes. Instead, this shonen anime is about pirates, specifically the Straw Hat pirate crew, and unlike other pirates, they’re helpful and act like seafaring heroes. It premiered in 1999, has over 1000 episodes, and is still going, with new episodes of Season 20 airing currently.

This anime has a ton of action and comedy to keep viewers entertained, which fans of My Hero Academia are sure to enjoy. The protagonist is Monkey D. Luffy, who, similar to Izuku, randomly gained powers, albeit completely by accident. His dream is to become the king of pirates, and along his journey, he must gather a crew, make it to Grand Line, and find the final treasure referred to as the One Piece.

Chances are, at some point, you’ve heard of this anime, and it’s worth the watch. If you want to absolutely get lost in an anime while you’re waiting for more My Hero Academia content, then One Piece is for you.

To keep the theme of absolutely iconic shonen anime going, we’ll add Naruto, a show anime fans and non-fans alike have probably heard of at some point, to the list. The show aired from 2002 to 2007 and continued from 2007 to 2017 with Naruto: Shippuden, and there are over 700 episodes in total.

Instead of superheroes, this anime focuses on ninjas. It does a fantastic job of telling a compelling story and is packed with intense action sequences and characters adored by the fandom. We’re looking at you, Kakashi.

The protagonist is none other than Naruto. Much like My Hero Academia’s main character, Naruto aims to prove himself worthy as a ninja and to his village. He carries the chakra of the nine-tailed demon fox and must face many trials and obstacles if he wishes to gain the respect of his fellow villagers and become Hokage.

This shonen anime is packed full of amazing abilities and intense battle scenes. When it comes to anime like My Hero Academia, you should definitely give Naruto a watch if you haven’t already.

Yet another incredibly popular anime to add to the list is Hunter X Hunter, which aired from 2011 to 2014. The show focuses on hunters rather than superheroes, but they’re more similar than you might think.

In Hunter X Hunter, potential hunters must undergo intense testing, much like the students at US High School, in order to get their licenses and become full-fledged hunters. The anime focuses on friendship much like My Hero Academia does and also has a ton of rather spectacular action scenes.

Gon Freecss is the show’s protagonist, and he aspires to become a hunter and find his missing father. Along the way, he meets several new friends who all have their own backstory, as well, allowing viewers to become emotionally invested in all of the characters and not just young Gon.

In this anime like My Hero Academia, viewers can watch Gon and his friends fight many demonic enemies, some of which are fellow hunters. Follow along with the show’s twists and turns as you binge-watch Hunter X Hunter to make it to the next season of My Hero Academia.

As fans of My Hero Academia patiently wait for the return of UA High School, they can visit the Death Weapon Meister Academy found in Soul Eater. This anime aired from 2008 to 2009 and is animated by the same company that does My Hero Academia.

Both of the schools in each anime are rather similar, with students not only learning to battle but also attending classes with unconventional teachers. Students who attend the Death Weapon Meister Academy aren’t superheroes, but they still fight in awesome battles in order to save the world.

The main characters are meister Maka Albarn and her Demon Scythe companion, Soul Eater Evans. The show follows three groups of students, not just Maka and Evans, though. This anime like My Hero Academia is full of action, comedy, and a magical school setting — a great option to fill the void for MHA fans.

If you’re looking for a wacky anime set in a school, look no further than Assassination Classroom from 2015. The students in Class 3-E of Kunugigaoka Middle School don’t have any superpowers. In fact, they’re totally normal kids.

However, their teacher, Koro-sensei, is unlike any other teacher around. He believes in his students, helps them to improve their grades, and is a yellow octopus alien with a silly smiley face who wants to teach his pupils to become assassins. Yeah, you read that right.

This anime is hilarious but also delivers some great life lessons and heartfelt scenes. Assassination Classroom is a great option to tide My Hero Academia fans over until the next season.

This cute and magical anime like My Hero Academia is from 2017 and is a great option to binge before more content arrives. Sure, both anime have “academia” in the title, but the similarities don’t end there.

Little Witch Academia is full of comedy and powerful abilities, which are due to magic in this case. The protagonist is Akko Lagati, a normal girl with a dream to become a witch and help the world, which relates a lot to Izuku. Akko’s idol, Shiny Chariot, is the reason her dream of becoming a witch begins.

Viewers can follow Akko’s journey as she makes new friends and a few enemies on her way to achieving her dream. Little Witch Academia is an excellent option for fans of My Hero Academia to watch.

Don’t let the adorable title of this 2011 anime fool you. This show is about a realistic view of superheroes who have to compete against each other for money. In Tiger & Bunny, being a superhero is a job, and it’s just as much about making a profit as it is about saving the world.

Superheroes referred to as “NEXT” need to battle villains in order to earn Hero points. They can then use these points to be featured on HeroTV, a reality TV show. The anime has two protagonists, veteran hero Wild Tiger and newby hero Barnaby, and similar to Izuku and Bakugo, they don’t necessarily get along very well.

Tiger & Bunny has a complete first season with a second season currently airing on Netflix. This anime offers a unique perspective within the superhero genre and is a must-watch for fans of My Hero Academia.

Yu Yu Hakusho is definitely the oldest show on this list of anime similar to My Hero Academia, having aired from 1992 to 1995. It’s an action-adventure anime written by the author of Hunter X Hunter.

The show’s fight scenes are packed with action, with a similar style to the battle scenes in Dragon Ball Z since the two shows are from the same era. The protagonist, Yusuke Urameshi, is a middle school student who unexpectedly dies and is then resurrected by the Spirit World in order to become a Spirit Detective.

Yusuke trains and battles the forces of evil alongside his classmate, Kuwabara, and two friendly demons. Together, they’ll try to save the world. Yu Yu Hakusho is loosely similar to My Hero Academia and is a classic that fans should definitely give a try.

This almost eccentric anime takes the concept of a magical academy to a whole new level. In Food Wars!, there are no superpowers, superheroes, or magical abilities. Instead, the students at Totsuki Academy strive to learn the intense art of cooking high-end cuisine.

Don’t let that concept steer you away, though, because the cooking battle scenes are actually super epic. The show’s main character is Soma Yukihira, and he aspires to surpass his renowned chef father and cook the most delicious and incredible dishes in the world. Similar to Izuku, Yukihira is an underdog, and he makes a ton of friends along his journey and just as many enemies.

Truly, who knew that the world of cooking could be so ruthless and even seductive? Food Wars! is basically a combination of anime and reality TV. If you’re looking for an interesting show like My Hero Academia to try before the arrival of the next season, you should definitely give Food Wars! a watch.

READ NEXT: 10 Anime Like Demon Slayer You Should Watch