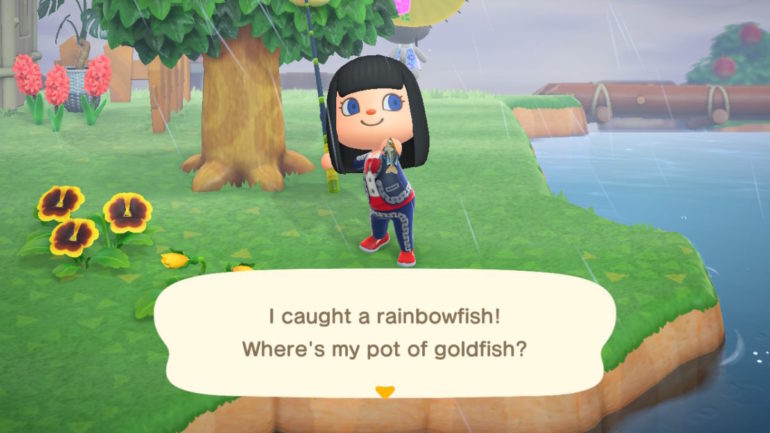 Animal Crossing: New Horizons is a game that, despite it being a game about nothing, doesn’t really like to stay the same for alone. Each new months brings a host of new fish, one of the newbies for May being the teeny-tiny and somewhat rare Rainbowfish.

The Rainbowfish actually makes its Animal Crossing debut in New Horizons as it hasn’t been featured in any other game to date. There’s no doubt plenty of brand new fish awaiting us in the months ahead, too.

Here’s all the info you need to catch the Rainbowfish in Animal Crossing: New Horizons. If you need a whole load more New Horizons guides, we have you covered.

“I caught a rainbowfish! Where’s my pot of goldfish?”

The Rainbowfish casts a small shadow and looks like a goldfish with absolutely gigantic eyes.

The Rainbowfish can be found hanging out in a river, which is basically any body of water that connects back into the ocean. They cast a small shadow, and can be spotted between 9AM and 4PM every day.

As always, you will need at least a flimsy fishing rod to catch the Rainbowfish. If you’re having trouble finding one, don’t forget to craft bait with clams so more fish will spawn in front of you, while also checking that you are fishing during the right times.

Once you’ve caught a Rainbowfish in New Horizons, don’t forget to turn it into Blathers at the museum to add it to his collection.

Here’s what Blathers has to tell you about the Rainbowfish:

“The rainbowfish is a tropical fish known for its metallic colors and beautiful fins. There are over 50 different species, each with a unique and pleasing color. I must say, it does make me wish for feathers of a more exciting hue than “underbaked brownie.”

When you catch your second Rainbowfish, you can then sell it to Nook’s Cranny for 800 Bells. Not the best price for fish in the game, but by no means the least.

You can also hold onto it until C.J. arrives on your island, who will then buy it for 20% more than usual for a price of 1000 Bells. You can also give him three of them and he will give you a Rainbowfish model in return.

When Are Rainbowfish Available Until?

Don’t worry, the Rainbowfish is available in New Horizons for a very long time. It will spawn between the start of May and the end of October, giving you plenty of chances to fill out your Critterpedia.

If, for whatever reason, you can’t find one in time, you could always give time travel a spin.

Animal Crossing: New Horizons, which is out now exclusively for Switch, is a game that is all about rainbows — for your soul. From our review: