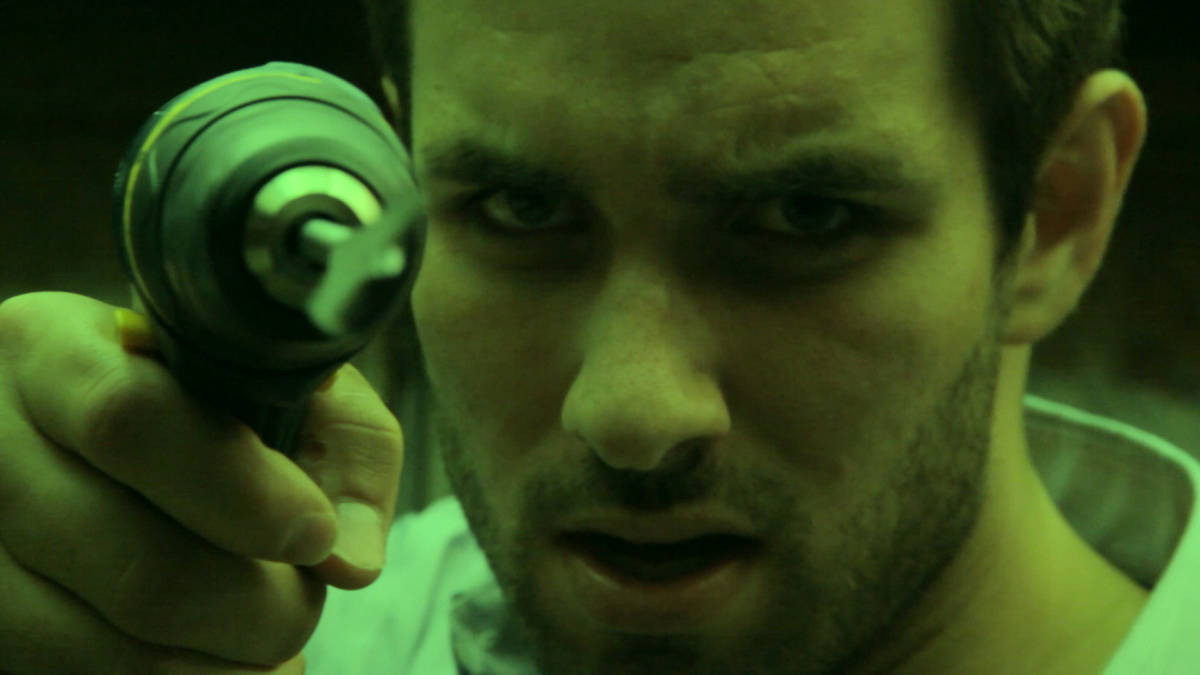 I like low-budget horror and sci fi movies. There’s a certain charm they have, where you can see what the director intended and extrapolate from there what it would be like if the filmmakers had a bigger budget and a bit of experience under their belt. As a fan of Mystery Science Theatre 3000 and late-night Netflix trawls, I’ve seen my fair share of ‘bad’ movies. So I was quite willing to give this film the benefit of the doubt and check it out. I hoped that it would be one of those rare glints of gold you find when panning a muddy river, a hidden gem, a new favourite.

Dead List is about a group of actors who’ve auditioned for the same role but die in gruesome ways, each branded with a mystical glowing rune connected to an ancient magic book. This is an excellent premise for a movie – imagine a race against time as our protagonist must discover which of his so-called friends is putting out magical hits on his peers and survive long enough to break the curse and land the coveted role. Unfortunately, Dead List is an anthology film and as such the idea is relegated to mere background as a framing device and a thread that runs loosely through the segments.

This anthology format is ultimately the movie’s downfall. Because the film is presented as having a single plot, you would expect each of the segments to be thematically and tonally similar, but this isn’t the case. Each segment is a short film unto itself, but not one that would stand entirely alone if viewed as a short separate from the others. Because of this, the mood and pacing can vary wildly from segment to segment. The most jarring is between segment two ‘Scott’ (a disorienting mindfuck of a scene where a man is trapped in his apartment and goes deaf) and segment four ‘Kush’ (a straightforward gorefest in which a man literally melts and falls apart).

There’s also an unintentionally hilarious moment where the book is flying around, apparently giggling to itself like a gremlin. The tone of the movie is just all over the place. This is a problem because you want your audience to be engaged all the way through, and too many people are likely to be lost at different points. Someone who wants tension and creepiness may well be sickened by the gratuitous gore of ‘Kush’, but a gorehound who’d love that might not make it to that section as the others may be too flat for them to sit through. This is a risk you take when watching an anthology film, but when it’s billed as a single story and a single narrative, it just feels uneven and messy.

Because this is meant to be a single narrative, it’s confusing that the time frame is all over the place too. It’s initially unclear when this is all taking place, as it jumps from day to night pretty indiscriminately, but it becomes apparent that it’s simply not happening in chronological order and is meant to take place over a week. I don’t know if this was an artistic choice, but it just made the film seem even more jumbled.

The acting is pretty bland too, with some notable exceptions. Rob Healey’s Kush in particular stands out as being pretty poor, at times sounding like he’s reciting his lines by rote. Deane Sullivan’s Cal, who I suppose is the protagonist (we keep cutting to him between segments) does a fine job, but I was very distracted by the fact that he looks a lot like Ethan Hawke, and I wanted to be watching a film with Ethan Hawke in instead. Sorry, dude.

It’s not all bad, though – the movie is very competently shot, and creates tension and unease pretty effectively when it needs to. The visual effects range from ok (the glowing brands, the monster that attacks Kush) to absolutely great (the squishy, gooey gore when Kush deteriorates). There’s an excellent scene of conflict between Cal and his room mate Trevor right near the end before it’s ruined by bringing the frankly boring killer clown back.

Of the segments, ‘Jason’ is the best. It starts a little poorly, with one of the actors essentially screaming his lines despite his scene partner being literally sat next to him in the car, but as soon as they nearly run over a strange silent old woman in the road it suddenly picks up and gets very creepy, very quickly. Eric Pearce did a very good job of selling Jason’s heartbreak as well as his terror. The actress playing the creepy old woman in Jason’s segment was also great, gurning and snarling her heart out. When it turns into a game of cat and mouse in a darkened house, I finally felt some real tension, and the requisite jumpscares were well-executed.

If the rest of the film had captured the same spirit, it could have been excellent. As it is, it’s a mess of a film. Characters are poorly sketched (one of them literally says “You know how I like to make people look like assholes” like that’s a thing actual people actually say) and motivations are muddy, while some things seem to happen for no reason. It definitely feels undercooked.

It’s a great premise, sadly wasted with poor execution. If it had been shot as a single film rather than several shorts stitched together then it could have had an actual protagonist and antagonist, it could have had a coherent plot, we could have cared about the characters more. Instead, we have a film that just coasts along not doing very much. Terrible things happen to some unlikeable people but we don’t know enough about most of them to care what happens them.

Verdict
Great premise, botched execution. Too few shining moments to recommend. It does show potential and the team could craft some great horror in future, but there's still work to do. Review screener provided
3.5
Cultured Vultures is a pop culture website established in 2013 covering all things gaming, movies, and more. We eat your words.
All The News On The Biggest Games