Animal Crossing: New Horizons: How To Catch A Pondskater 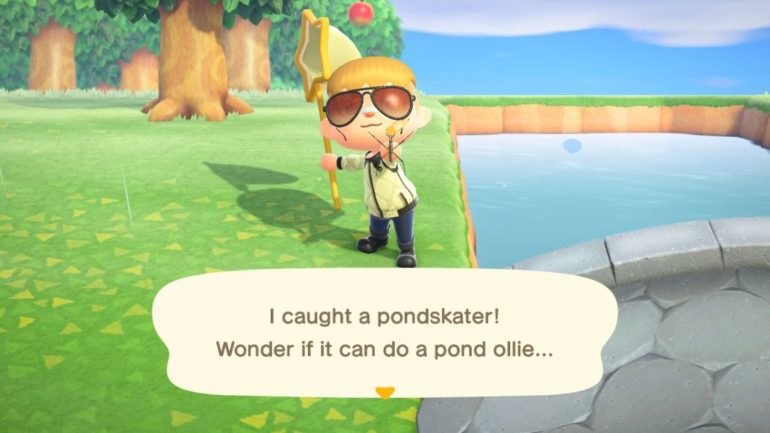 The start of May sees a whole host of new bugs making their way to your Animal Crossing: New Horizon island, the month seeing the arrival of the common pondskater, which has a name that kind of explains everything there is to know about.

Here’s all the info you need to catch the pondskater in Animal Crossing: New Horizons.

As you may have already guessed, the pondskater can be found atop ponds in New Horizons, just dancing around. Kind of looking like a daddy long legs but on water, you can always create a pond using Island Designer to catch the pondskater if there aren’t many on your island.

The pondskater is available in New Horizons from 8AM until 7PM each day.

Once you’ve caught a pondskater, don’t forget to turn it into Blathers at the museum to add it to his collection.

When you catch your second pondskater (should be no issue, they are very common), you can then sell it to Nook’s Cranny for a rather underwhelming 130 Bells. Yes, that’s all.

You can also hold onto it until Flick arrives on your island, who will then buy it for 20% more than usual for a price of 156 Bells. Wow, big Bells.

When Is The Pondskater Available Until?

You have plenty of time to catch the pondskater in New Horizons, it being available from the start of May until the end of September. You will no doubt catch many of them as they seem to be absolutely everywhere.

Just like all bugs, you will need at least a flimsy net to catch them, even though they can be found on top of water. They are very easy to catch as they don’t seem that bothered by your presence.

Animal Crossing: New Horizons, which is out now exclusively for Switch, is a pretty good video game. From our review: