I mean it's not THAT great. 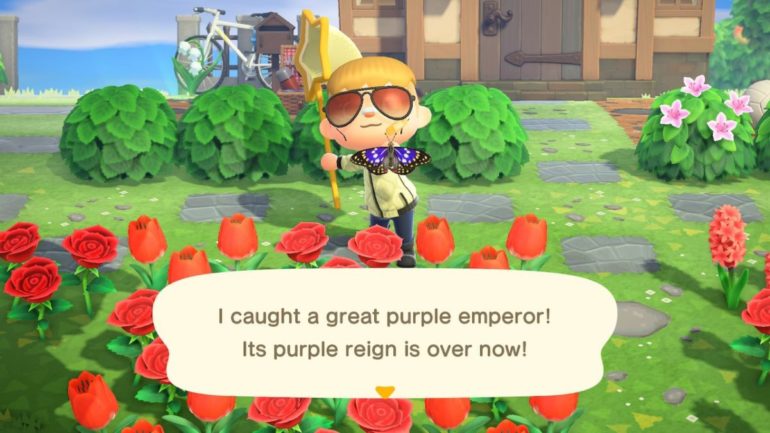 With spring now having finally sprung, Animal Crossing: New Horizons is getting a whole host of new bugs to mark another month gone. From May, players will be able to catch the medium-sized, somewhat rare great purple emperor around their island and on mystery islands.

Here’s everything you need to know to catch the great purple emperor in Animal Crossing: New Horizons.

The great purple emperor, as with a lot of butterflies, can be found wherever you have exotic flowers going. We strongly recommend that you mix the colours of your flowers into hybrids as this will generally attract more butterflies and critters in general.

They appear from 9AM until 7PM every day. This might be obvious to anyone who’s played New Horizons for a while, but you will need at least a flimsy net to catch one.

Once you’ve caught a great purple emperor, don’t forget to turn it into Blathers at the museum to add it to his collection.

When you catch another one, you can then sell it at Nook’s Cranny for a very decent price of 3000 Bells, or display it in its tank.

You can also hold onto it until Flick arrives on your island, who will then buy it for 20% more than usual for a price of 3600 Bells. You can also give Flick three of them and he will craft you a model.

When Is The Great Purple Emperor Available Until?

The great purple emperor butterfly will be yours to catch from the start of May until the end of August. That means you have just four months to catch them before they’re gone again for the whole year, but they are not too rare so you shouldn’t have much of a struggle.

Animal Crossing: New Horizons, which is out now exclusively for Switch, is a fun little ditty From our review: