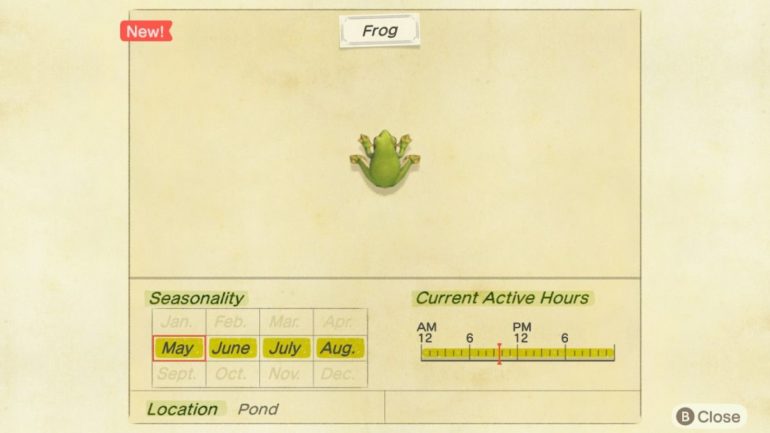 Each new month brings a lot of exciting new bugs and fish to Animal Crossing: New Horizons with May bringing a whole host of critters to catch and to your critterpedia. Frogs are a new addition for May, the little leapers likely to be a proud part of many collections.

Here’s all the info you need to catch frogs in Animal Crossing: New Horizons.

As you may have already been able to guess, the frogs in New Horizons can be found by fishing at a pond. If you don’t have many ponds on your island, don’t forget that you can boot up the Island Designer app to make a new one.

The frog is available in New Horizons all day and casts a small shadow. You will, of course, need at least a flimsy fishing rod to catch a frog. If you’re really struggling to catch one, don’t forget to craft bait.

Once you’ve caught a frog in New Horizons, don’t forget to turn it into Blathers at the museum to add it to his collection.

When you catch your second frog, you can then sell it to Nook’s Cranny for a rather underwhelming 120 Bells. Seems a bit too cheap to us.

You can also hold onto it until C.J. arrives on your island, who will then buy it for 20% more than usual for a price of 144 Bells. Wow, you will be rolling in money.

When Are Frogs Available Until?

While frogs are very common in Animal Crossing: New Horizons, they won’t actually be available in game for all that long. You will be able to catch them from the start of May until the end of August.

Animal Crossing: New Horizons, which is out now exclusively for Switch, is a video game that we like a good bit. From our review: