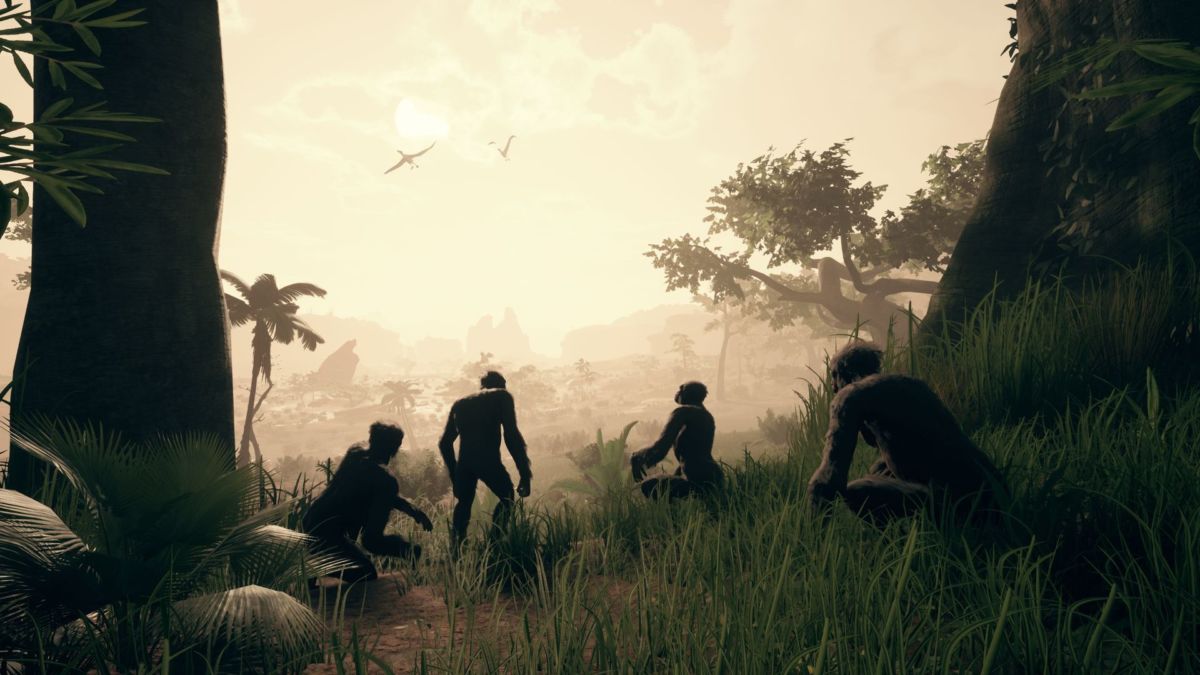 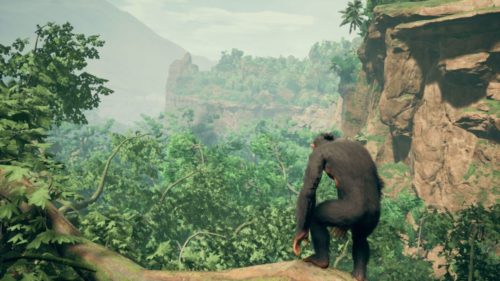 The tiger saw me much earlier than I saw him. With a leap out of nowhere, he was on top of me, gnashing away at my neck. I had no escape, no hope, and no stick — Ancestors’ version of the Master Sword. After barely a struggle, I was dead, my expedition a failure. No bother, I was in the body of another ape back at the HQ within a second. I did the only thing you could ever do to grieve a fallen friend: I gave his partner some back rubs and then impregnated her.

Such is life in Ancestors: The Humankind Odyssey, the long in the making open world monkey simulator from the creator of Assassin’s Creed, Patrice Désilets. Taking the action right back to our species’ origins (even prior to Far Cry Primal), you must nurture and evolve hominids over millions of years, building them up from the hunted to the hunter with careful breeding and steady growth. 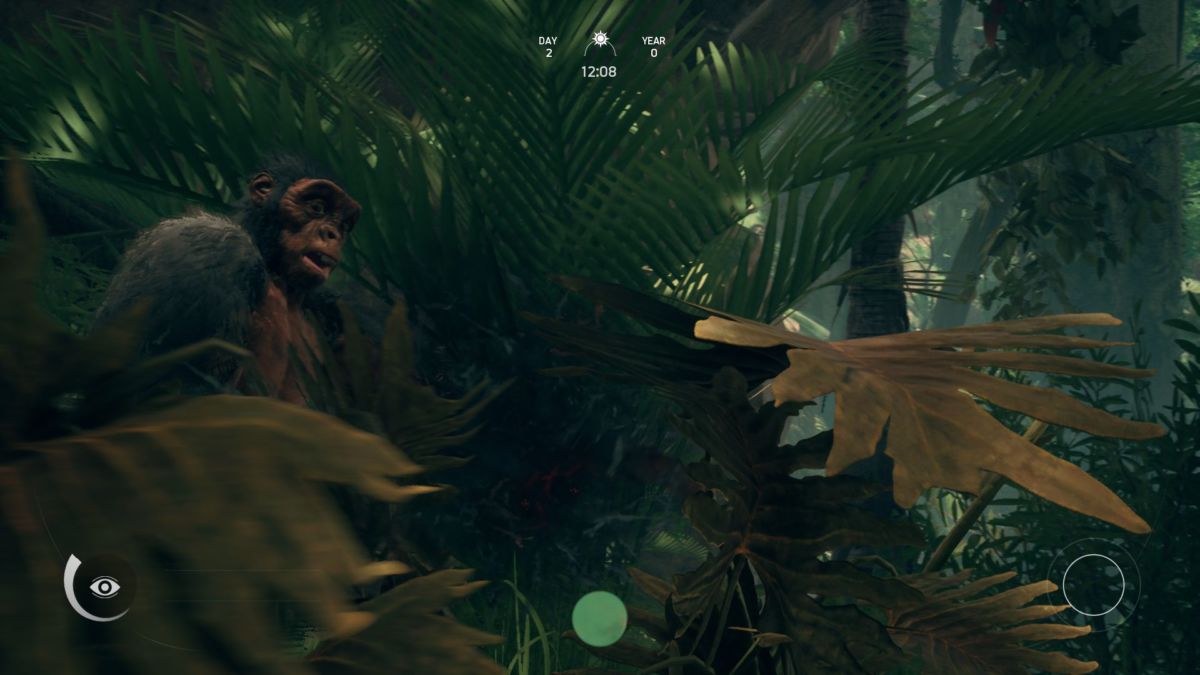 You start off as the kind of ape even Caesar wouldn’t be proud of. This is where Ancestors is at its most frustrating, you barely given any guidance on what to do and your hominid incapable of completing even the most menial of tasks. Stick with it, though, and the sense of progress is incredibly rewarding and arguably Ancestors at its best.

Unlocking better abilities comes down to the way you play and experiment in the early hours, your curiosity eventually being rewarded with the ability to use both hands to pick things up, alter items (essentially crafting), and switch between different hominids while also having them at your beck and call. A random event — sadly one of only the few across the whole game — will depict a meteorite crash landing in your vicinity, after which the game starts to really accelerate. 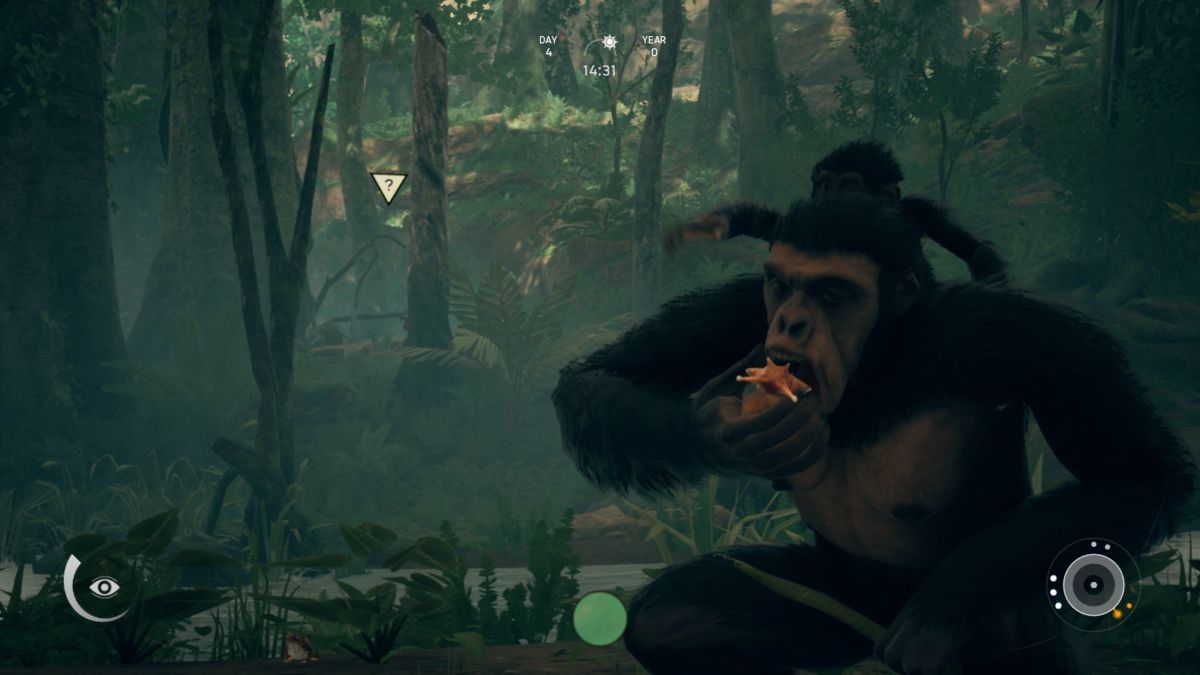 You’d be wise to not venture out of your starting area too early, however. The idyllic spot is the best place to get to grips with Ancestors’ many moving parts; there’s a lot to take in all at once. As (partly) a survival game, keeping on top of your water and food intake is paramount, but there’s also the need to sleep to keep your daily regiment in line. Getting enough of each every day will keep your energy filled up, allowing you to venture out further and discover Ancestor’s obscenely large world without stopping to catch your breath every few seconds.

Traversal in Ancestors is most fun in the jungle climes, you being able to swing from branches and scale trees without much fuss — kind of what you’d expect from the mind behind Assassin’s Creed. Discovering items is as simple as going up to them and pressing a button, though you may need to rely on your initially cumbersome senses to track them down. You are able to utilise sight, sound and smell to track resources — and maybe even some predators — down out in the wild. When it comes to food, your hominid will react happily if it’s fresh and edible, while “off” foods will cause a solemn look. Inspecting every single one is worthwhile as it all contributes toward the game’s unusual approach to an upgrade system: neuronal energy. 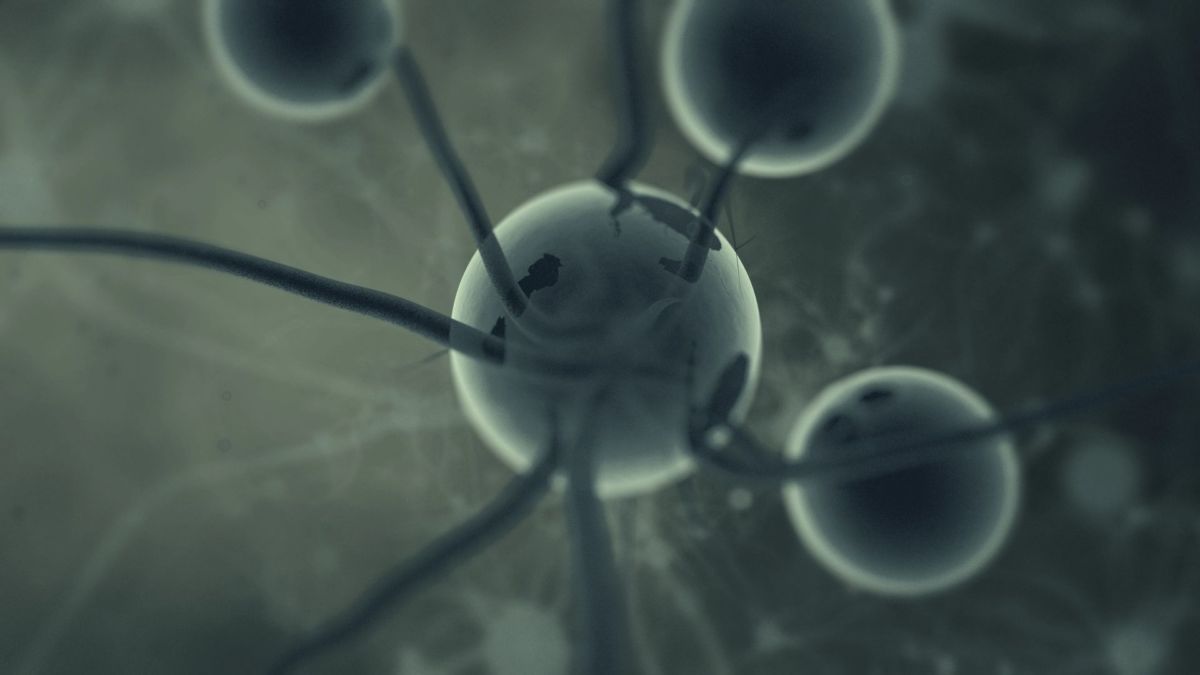 Being a game about the evolution of pre-mankind, Ancestors allows you to improve the brains of your hominids (though luckily all progress is collective) after you have accumulated enough neuronal energy to unlock nodes. This comes down to what you experience and discover out in the world: if you craft a lot, that cortex of the brain will be more readily available. There’s a huge web of upgrades, though it must be said that some “improvements” seem absolutely minimal at best, which relates most to how you improve your senses. In addition, it takes an absurd amount of time to upgrade. Not in the sense of hitting a threshold for neuronal energy, but in how long it takes to hold the button and see a line flicker to the unlock. It should take no longer than a minute to unlock some new upgrades, yet it feels like an eternity.

Crafting is one of many exercises that will help you to fruitfully evolve, though it itself is about as primitive as you would expect — there aren’t any mind-blowing combinations here that will spawn a DeLorean. You will be making sharpened sticks a lot, which is achieved by finding a dead branch, swapping it your free hand, altering it to remove the smaller branches, finding a rock, and then battering the end of the stick with said rock. There’s also the ability to make remedies for illnesses and injuries you incur while out in the wild, which can be as simple as altering an item or even creating a rock grinder, which you can then use to grind down a resource into a paste. There are a few other crafting combinations in Ancestors, though not quite as many as you would expect throughout from the handful you figure out early on. 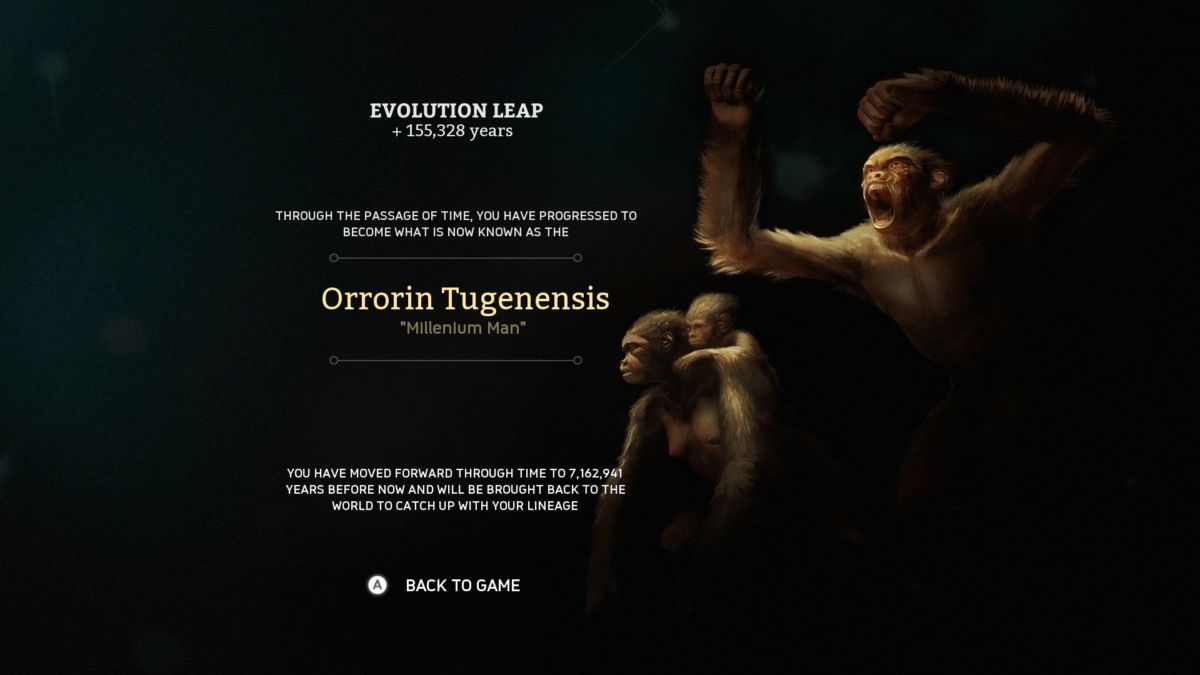 Even though I played with a controller as recommended, I still found Ancestors to be unnecessarily fiddly in terms of using and picking up items, especially if other hominids were near the thing I wanted to pick up. Similarly, having to pick up an item and then go through the whole routine repeatedly to craft something grows tiresome quickly. It’s also too easy to lose track of items you place — although you can use your senses to track them down again, there’s no way of storing what you’ve foraged (at least from what I could tell), so everything inevitably just gets strewn randomly all over your settlement.

Undoubtedly Ancestors’ most impressive mechanic is its lineage system, which involves you selectively breeding your hominids based on different traits. For instance, if a female hominid has a mutation based on motricity (the ability to stand on two legs), this will be passed on to future generations and open up new abilities in the neuronal web as a result. Once you have maximised your lineage with as many babies as possible, changing generations will allow those mutations to take effect. A heartfelt sequence shows the elders of the clan comforting the youngsters as they pass away from old age and the youngsters grow into adults — the circle of life is very bittersweet in Ancestors.

Once you’ve passed a generation and have brought some new life into the world again, you are then given the opportunity to evolve. The single objective of Ancestors is to outpace science for pre-homo sapiens evolution, which you can accomplish by achieving feats. These include using a tool a set amount of times, discovering new areas, hunting and defending successfully, and much more. You will evolve based on the amount of feats you accomplish with the rarer and more difficult feats giving you more years towards your tally. Every two million or so years, you evolve into a new species, which usually entails a better metabolism, strength, and speed.

This is unfortunately where Ancestors starts to lose its hook and the variety dissipates, turning evolution into a chore rather than something that should strike you with wonder. After the first few hours of discovery as you acclimate to its world, Ancestors settles into a wearisome rhythm of doing the same things over and over and over until it basically boils down to a series of yawn-inducing baby-making and stick-sharpening vignettes. 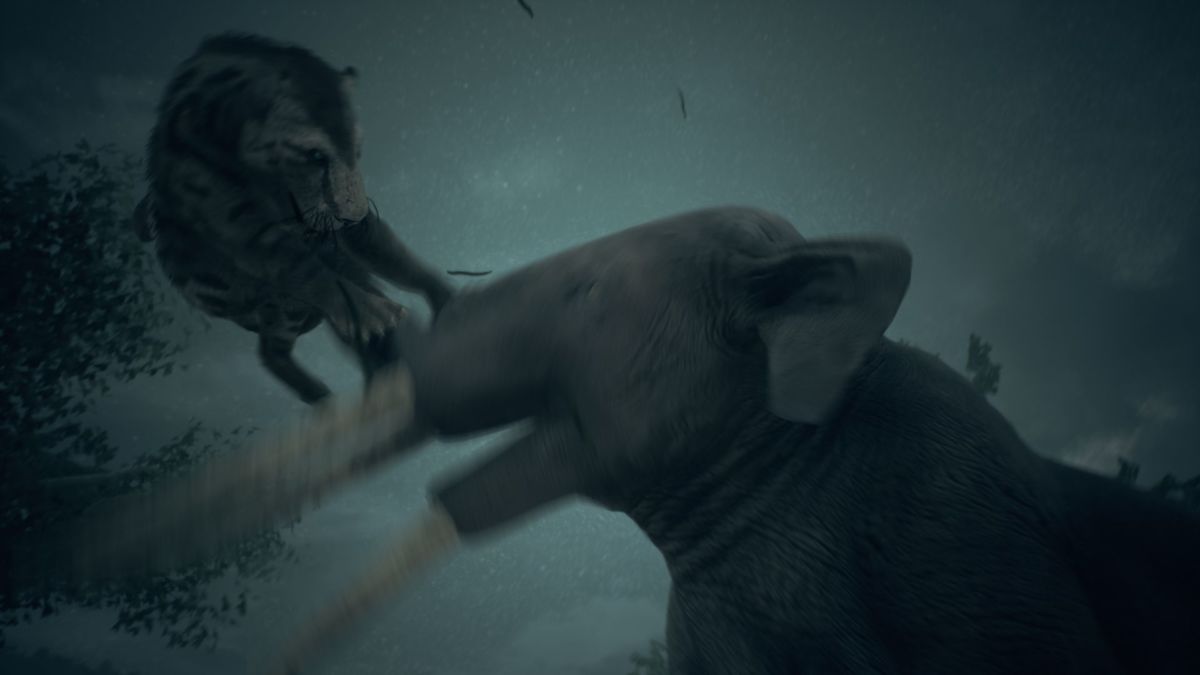 After you have used up all available resources at your starting spot, you must then venture out to find a new home with your clan in tow. Once a biome has been exhausted and every inch of it sniffed and sexed on, you then move on to places like the desert and grasslands where you have to “conquer your fear” to get rid of the black and white filter and level out your ape’s dopamine. Shortly following some searching and smelling, you can then visit a light to conquer said fear and extend your clan’s home range, after which you will find a handful (at best) of new animals and resources to discover. This is the bulk of Ancestors: sexing, giving birth, completing feats, moving on, and repeat. The genius mechanics that made it such a fascinating experience to begin with lose their magic, which then brings its other faults into clear view.

Combat in Ancestors is just about the most frustrating and basic I’ve experienced in any open world game. It’s understandably not meant to be the focal point, but when every confrontation comes down to a slow-motion QTE to allow you to counterattack or dodge and nothing else, it brings the rest of the experience down with it. This wouldn’t be too bad if combat was a rarity, but it seems like every five minutes a tiger or jackal is leaping out of nowhere. I remember getting picked on by a black tiger, crocodile and then a regular tiger all within a minute of each other, as well as skipping a generation only to immediately be greeted by a tiger. You can kill them, but this takes upwards of three strikes and you must be lucky enough to have the right stick on you. 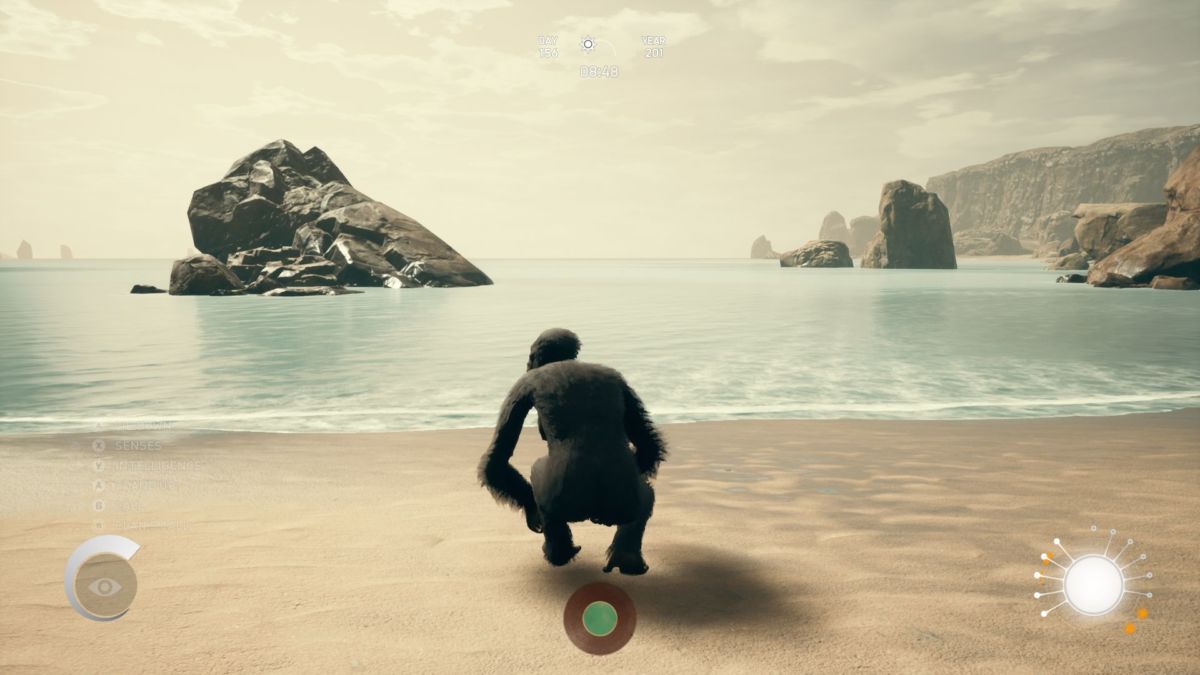 The annoyance is compounded by the incompetence of your hominids for a good half of the game, them not being able to defend themselves until you’ve made significant progress in your neural web — and even then that doesn’t matter as they may just get injured anyway. Most expeditions in Ancestors go like so: walk a distance, get attacked, have clan members bleeding, find horsetail or aloe, awkwardly inspect every single one to see who the victim is, switch to them, craft the horsetail remedy, apply, and then keep going on, only to inevitably have to repeat the process again in no time at all.

Things could be helped if there was a “roster” of all of the apes in your clan, somewhere where you could look and see who’s who and what their status is. This would also help foster a connection with some of them and help the player to care about their wellbeing. Instead, I found all my monkey groups to be amorphous blobs of hooting and grunting that were just good for making babies. Ancestors somehow turned me from an open-mouthed adventurer into a jaded breeder and nothing more thanks to its repetitive, grindy nature.

For a game about the beginning of us all, there’s a bit of irony in Ancestors being at its best in its own beginning before losing its way. The marvel of evolution gives way to a gameplay loop that quickly irritates without enough variety to spice it up, which, when combined with poor combat, fiddly controls, and repetitive crafting, all add up to an experience that might drive you bananas.

Verdict
The early joy of discovery in Ancestors is betrayed by repetitive gameplay vignettes that feel like serious work before long.
6.5