What If Adam Page Loses Against Kenny Omega? 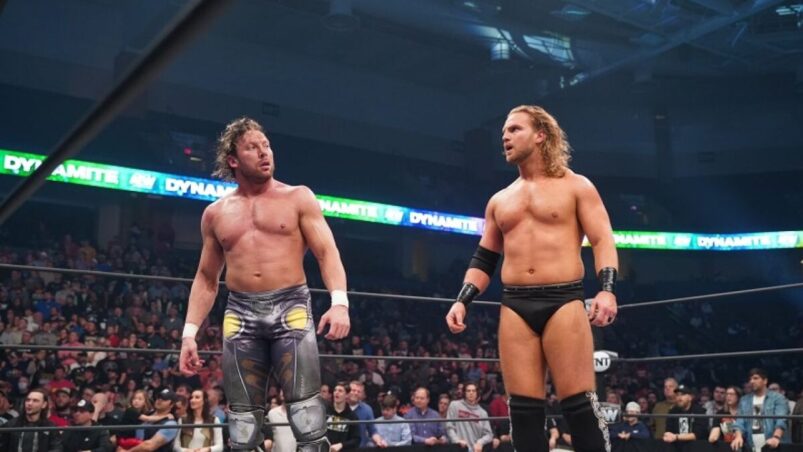 On the July 7th edition of AEW’s Road Rager, as Don Callis proclaimed that there was nobody left for AEW World Champion Kenny Omega to defeat, they found themselves interrupted by The Dark Order. Before Evil Uno had the chance to disagree, The Dark Order were attacked by Omega’s lackeys, the Good Brothers and Michael Nakazawa, only for ‘Hangman’ Adam Page to ride to the rescue. With an audience firmly behind him, Page cleared house and then stood face to face with Omega, the man who he has so much history with.

Ten months ago, All Out 2020 featured Page and his former partner Omega unsuccessfully defending the AEW World Tag Team Championship, losing the titles to FTR. After the match, Omega abandoned his partner and began his path to becoming the ‘Belt Collector’, aligning with his close friends Don Callis, the Young Bucks and the Good Brothers. On the way, Omega became the number one contender to Jon Moxley’s championship by defeating ‘Hangman’ Page at last year’s November pay-per-view, Full Gear 2020, leaving ‘Hangman’ behind. But now, Page is the number one ranked wrestler in AEW, and is seemingly primed to redeem himself against Omega, to win the championship. But what if he doesn’t?

Page’s journey in AEW has so far consisted of a slow-burning fall, beginning in 2019 when he was the winner of the Casino Battle Royal at Double Or Nothing, earning him an opportunity to battle Chris Jericho to become the inaugural AEW World Champion. With the biggest match of his career ahead of him, Page reached out to his fellow Elite members, asking The Young Bucks to accompany him ringside. To his surprise, despite a history of accompanying Omega in NJPW, Nick and Matt Jackson refused, and Page battled alone in a losing effort against Jericho. Having stumbled, Page suddenly found a surprisingly kindred spirit in the also struggling Omega, coming together as a tag team almost more through necessity than desire.

In January 2020, Page and Omega defeated AEW World Tag Team Champions SoCal Uncensored (Frankie Kazarian and Scorpio Sky) and began a successful 228-day title reign. Despite this, Page’s confidence and belief continued to drop, beginning a metamorphosis into ‘the anxious millennial cowboy’, with a reputation for drinking and a wracking insecurity in his own ability. Page’s insecurities eventually were played upon by FTR, developing a schism between ‘Hangman’ and The Elite. With Page’s feelings of inadequacy in comparison to the Jackson brothers, he wanted to leave The Elite, but was refused, and cost the Young Bucks a title shot in an act of self-sabotage.

In just a few months, Page found himself manipulated by FTR, bitterly discarded by the Bucks and finally abandoned by Omega. He had lost his chance at the AEW World Championship, burned his bridges with his friends, cost himself the AEW Tag Team Championship and was left with his confidence at an all-time low. In an attempt to bounce back, he returned to the singles division for a tournament to crown the number one contender to Jon Moxley’s AEW World Championship. He defeated Colt Cabana in the first round, survived Wardlow in the semi-finals, and at Full Gear 2020, faced the man who had abandoned him just two months ago. ‘Hangman’ had the possibility to redeem himself, to defeat the man who considered him an albatross, but despite his best efforts, he lost, again, and Kenny Omega didn’t look back.

And then The Dark Order came into the picture, with John Silver and Alex Reynolds leading an attempt to bring Page into their group, and Evil Uno offering help to Page. Scarred and broken from the experiences of the last year, and despite a growing friendship between ‘Hangman’ and the Dark Order, Page turned them down. He couldn’t accept the offer as he didn’t believe in himself or their sincerity, so Page tried to turn them away. But when Page was betrayed by Matt Hardy and his cohorts Private Party and The Hybrid 2, he found himself saved by the Dark Order. In a moment, the Dark Order proved their sincerity, that even if Page didn’t want to join them, they still considered him a friend. The man who once was too consumed by his self-hatred and alcohol to save The Elite now found himself an unlikely protector rushing to the aid. The ‘anxious millennial cowboy’ had become an inspiration to the Dark Order, and the AEW audience that had taken him into their hearts.

In 2021, members of the Dark Order began to challenge for the AEW TNT Championship, and Page stood by their side every time, telling Silver and Uno that even if they failed, they at least tried. It was these moments that brought us back to AEW Road Rager. The week before, the Dark Order interrupted Omega and set a case for Page challenging for the AEW World Championship, only for Omega to cite that Page had no belief in himself. In a moment that may be one of the most heartwarming moments on AEW Dynamite, ‘Hangman’ tried to lambast the Dark Order, and they told him it was his time to be champion.

And with that, it seems that the time is set, three years in the making, Adam ‘Hangman’ Page is ready to step up and win the AEW World Championship. But what if Page loses?

A small moment in that previous video is the line from Colt Cabana, where he says that Page isn’t afraid of Omega, he’s afraid of failing. Page failed when challenging Jericho, and then failed against Omega. Page had never been a singles champion in Ring of Honor or New Japan, only a tag team champion — he’s never succeeded alone. But more than that, his fear of failure resides in the fact that the last time he failed, he lost The Elite. There’s every possibility that defeating Omega may be the crowning of his career, but will it only paper over the pain he’s suffered? Will he still have it in the back of his head that if he wins the championship and eventually loses it, will the Dark Order also abandon him?

The next big pay-per-view is AEW All Out, at the beginning of September, and it feels like the perfect time for ‘Hangman’ to win the championship. The first ever All Out, he lost to Chris Jericho for the vacant AEW World Championship, and the next year, he not only lost the AEW Tag Team Titles to FTR, but he also lost his tag team partner. To finally climb to the top of the tower and succeed where he’d previously lost, the sense of poetic justice and reward of long term storytelling is the very ethos of All Elite Wrestling. But with upcoming special AEW Dynamite episodes such as Fyter Fest Night Two on July 21st, or even Fight For The Fallen on July 28th, it seems unlikely that AEW could hold off for so long for a match that is ready to occur. Unless it’s an opportunity to build the story even more.

Page doesn’t yet need to prove he can beat Omega. He actually needs to prove that he can lose, and get back up, that failure is something that occurs and can be bounced back from. More than that, Page needs to lose and come to terms with the failure, and the Dark Order have to show their words are more than just words. The image of Page challenging Omega, losing through interference from the Young Bucks or the Good Brothers, then preparing himself for disappointment from the Dark Order, only for them to show their support and comfort their friend? It could become the true cathartic release that Page requires to finally move on, the knowledge that he could lose and still be supported, that failure doesn’t rule him.

So what if Page loses? AEW has proven their ability to create stories through loss, whether it’s Darby Allin losing and drawing with Cody before becoming the AEW TNT Champion, or Jungle Boy growing from barely surviving ten minutes with Chris Jericho to almost defeating Kenny Omega. The idea of Page having lost to Omega at Full Gear 2020 when at his lowest, then losing in the next few weeks but overcoming his fears in the process, culminating in a third opportunity at the third iteration of All Out against the third ever AEW World Champion? Now that’s a masterclass in long term booking, something that will truly reward those who have followed the journey of the ‘anxious millennial cowboy’ (third time). And speaking of long-term booking, just have a look at Kenny Omega’s header on his Twitter page.