An error has occurred — capitalism must shut down immediately. 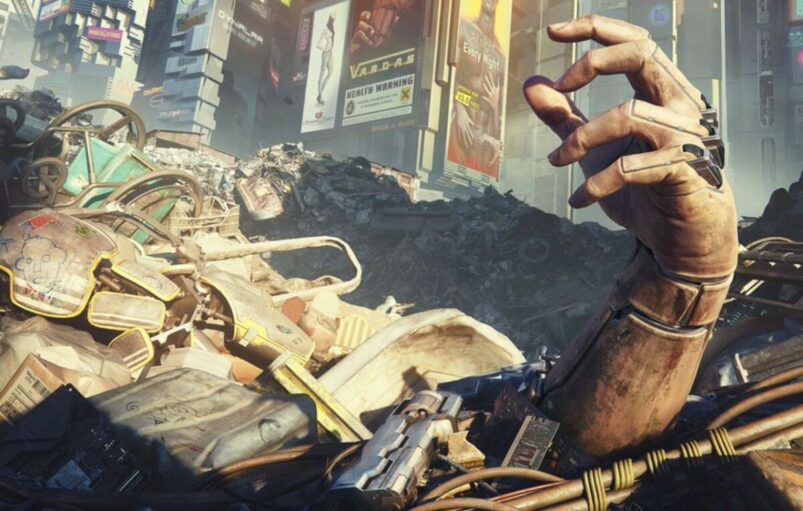 Welcome to YOU DIED, a new column where I dive into depictions and discussions of death in video games. We’ll dig into what death means, how this meaning is conveyed, and what this means for the game or for the players. Today, we’re jacking back in and reappraising 2020’s controversial juggernaut Cyberpunk 2077. In a near future where living is a ramshackle cobble-job of flesh and metal, what does death mean for an increasingly mechanical version of humanity?

Cyberpunk 2077’s Night City is a harsh place to live. The near-future is full of people living chrome-plated-hand to chrome-plated-mouth, and wealth inequality that has a city of haves nearly literally floating above the land of have-nots. From a gameplay perspective, Cyberpunk 2077 isn’t doing anything particularly new with how death works as a fail state. If you get hit too much, the protagonist V dies, or “flatlines” and you reload your save. Narratively, the game’s depiction of material concerns of life and death are a little more complex. For once, we’re not going to talk about the game’s buggy, broken early days (though they were certainly a trip), and instead we’ll take a look at what it means to live and die in Night City.

First and foremost, death in Cyberpunk happens frequently, and violently. You can shoot, stab, bludgeon, and explode people in gory, gruesome detail, and even cook their heads from the inside with the right cyberdeck ability. You can also have any of these things done to you if you’re not careful, and the conflict in Cyberpunk doesn’t skimp on gore and viscera. The criminal enterprises in Night City are severe — violence is a high risk in the workplace, and amidst all of the systemic inequality and vanishing resources for the city’s most vulnerable population, death is the only check that’s guaranteed not to bounce.

Beyond the quick and visceral deaths of all the enemies you nail with a headshot, Night City is steeped with a less dynamic death: the slow death of the starved and impoverished. Walking through streets, you’ll see whole neighborhoods conveying poverty, drug sale/use, and stagnating people who are struggling to make ends meet. Other neighborhoods are visibly better off, with more pristine buildings, and cleaner streets, with less features on the street for civilians to sit and rest. The hostility of affluent neighborhoods keeps unhoused people from congregating and inconveniencing the rich with their presence. The working class and lower class people’s bones are being ground down to make the elite’s bread, and you can see the process in action all through Night City.

There’s also a very literal example of the commodification of human life in the plot, concerning Keanu Reeves’ Johnny Silverhand. The rock star/terrorist’s mind has been backed-up onto a microchip — his old body is long gone, dead to the world. What’s left is essentially a digital ghost, haunting V’s head when they inject the chip into their own noggin. Johnny’s mind was seen as something valuable — or rather, the technology that he beta tested, “Soulkiller,” was seen as valuable — and his essence is a means of demonstrating that value. The people at the soulless Arasaka mega corporation don’t particularly care about Johnny, but they care about the chip where he’s taking up valuable RAM space.

Soulkiller’s ramifications carry over into the game’s endings. Depending on which ending you pursue, you can end up with the choice to let Johnny take over your body, or boot him out and take your body back. The latter condition happens to have a catch, though. Alt, a human being who successfully slipped her mind into cyberspace completely, tells V that the microchip containing Johnny’s mind has already corrupted V’s gray matter, and just ejecting the chip won’t save V’s mind. Instead, Alt can copy V’s psyche, wipe Johnny and the old V, and paste the duplicate V into the body for however long it has. If you choose this ending, you’re not actually playing as V at the game’s end, but as a copy. V, the V you’ve controlled all game, technically dies in this process — leaving an exact replica behind. It’s not a continuation, nor the same character, it’s just a reproduction. The assembly line logic has overwritten V’s identity. It’s like the classic conundrum of Star Trek’s transporters — when Starfleet tears its operatives apart at an atomic level and recreates them, they aren’t transporting anyone so much as shredding them and taping them back together.

Of course, this is only one way the game can end. Another ending lets you cash out early (you shouldn’t, it’s a real downer), and others see your mind stuck in a virtual file cabinet for Arasaka. In all of these endings, the tenuous connection between body and mind is front and center. Johnny’s body died, but his mind found safe passage in your bones, at least for a while. On the other hand, your body has a number of minds flitting into and out of it, but the body isn’t at as much risk as the mind. Can one die without the other? Which one is really “you?” And how would you even know if you lost the one but not the other? Even in some of the best ending scenarios, the process of resolving V’s crowded brain leaves them physically weakened, and living on borrowed time. To borrow a phrase from another cyberpunk staple, it’s too bad V won’t live — but then again, who does?

There’s another uniquely bleak way death is used in Cyberpunk, the immersive future VR products called Braindances, or BDs. These futuristic flicks are able to recreate not just sight and sound, but sensory information as well, fully dropping viewers into the body of whatever perspective the Braindance offers. This being a cyberpunk dystopia, there’s a dark side to this incredible technology — mainly that BDs are primarily used for experiencing pornography and hyperviolence. At one point, you discover a Braindance made with the specific purpose of capturing the exact moment a criminal gets killed. A later side quest, called “They Won’t Go Where I Go”, takes this morbid sensory voyeurism a step further by trying to stage an exact physiological recreation of Christ’s crucifixion, with a willing participant. It seems the citizens of Night City enjoy microdosing death — or maybe they just want to be a little forewarned before their time comes.

As made apparent by Cyberpunk 2077’s story, world, and themes, it’s a game about the struggles and pain of living in an all-encompassing, inescapable technocracy, where human labor runs people into the ground and profits are prioritized above all else. You’d probably think that, to make such a humanist (if perhaps nihilistic and over-edgy) work of art, the people who made the game must have had their own practices to ensure such dehumanizing labor conditions weren’t reflected in the real world, or you may have been waiting for this the whole time you read this article. In reality, CD Projekt Red enforced hellish crunch on its employees and ran them into the ground, yet another example of inhumane working conditions in game development. It’s galling to ever see reports of such grueling conditions for those who make games, and an aspect of the industry that deserves to die itself.

It’s just an especially uncanny thing to encounter in a game like Cyberpunk 2077, which, for all its myriad flaws, is fairly clear in its focus on the inherent dignity of a human life, and how we deserve better than to be cogs in a profit-maximizing machine that won’t even notice when we fall over, dead and spent. But it seems that for many in the gaming industry, class consciousness remains an escapist fiction.