MyMyMy, this could be great fun. 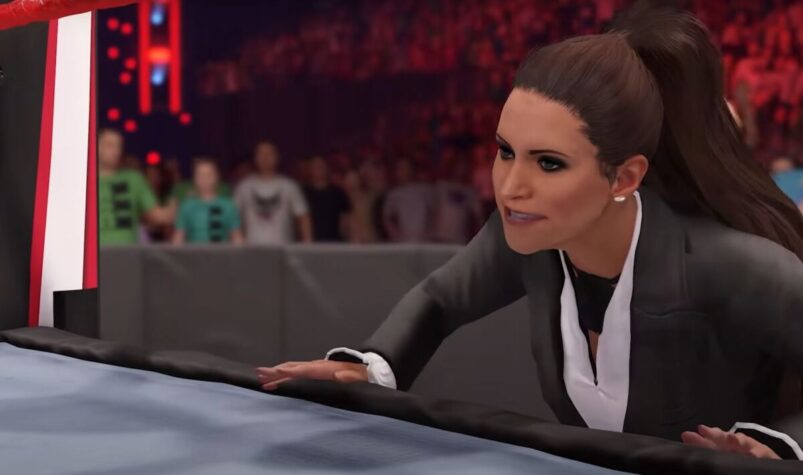 It’s always felt that, for a series where you can play out virtually any dream match with any stipulation, WWE 2K has been missing something, some mode that really makes it the de facto blend of wrestling wish fulfillment and fantasy booking in video game form. Universe Mode, Showcase and Towers have been fun, though nothing has really come close to the sheer immersion of the GM Modes from the Smackdown vs. Raw days. Now, with MyGM in WWE 2K22, that fan favourite mode is back — and it’s just as addictive as ever.

I recently had the chance to have a short hands-on with WWE 2K22, and while I expected to only spend a little bit of time with MyGM over taking on some matches with the game’s deep roster, I loaded up the mode and then oops, an hour had passed.

MyGM starts you off by asking you choose one of the four WWE brands a general commission, each with their own special Power Card that give unique benefits, such as more popularity for certain wrestlers or to hire a legend for free. Your microtransaction sense might be bristling at the mere mention of cards, but 2K have stated that there won’t be any in MyGM.

Once you’ve made your choices, then it’s time for the draft against the AI commissioner of your rival brand. Players get a set budget to use within the draft, which requires some tactical spending — do you go for the biggest names possible and spend it all, or buy midcarders and build them up while spending money on productions? — over eight rounds. I did what any sane person would do and immediately drafted Brock Lesnar to pit him against Tyler Bate to determine the strongest boy.

Your picks also matter in terms of how they play off each other, as while it’s all well and good having a bunch of beefy bruisers or flippy flippers, you’ll keep having the same kind of matches over and over with the lack of chemistry also affecting your ratings. MyGM asks you to pit faces against heels (while also letting you flip alignments through promo segments), change the match types on occasion, and establish rivalries to basically put on the best show that you can. Having to fill three match slots per show might not sound too hard, but when you also throw in having to make promises to certain wrestlers, keeping the fans happy, and continuously bettering your rivals as you build towards PPVs, it can become quite the balancing act.

What helps keep this loop fresh is the fact that you always have something to unlock in each new week, whether that’s arenas, staging, or even pay for advertising to put more butts in seats. The more of those posteriors you have claimed as your own, the more money you earn, the better the talent you can hire, the higher the caliber of the shows you put on, the bigger the gap between you and your rival brand until you are the undisputed #1. With players able to manage their brands for up to 50 weeks, you can build yourself quite the dynasty. Or you can put the strap on R-Truth and send him to the moon.

Speaking of straps, you only seem to be able to have one male and one female belt per brand, which seems like a massive shame, as is the small variety of match types, at least from what I played. This is a pity, as it may mean that some players don’t end up playing it maybe for the whole year, but the ability to create your own GM at launch may make up for that.

MyGM is a mode that really feels like it could live up to expectations, though it’s difficult to really weigh up such a deep mode with such a short amount of playtime. There’s maybe one thing that sums up my experience of WWE 2K22’s MyGM, though: I’d much rather be playing it right now than talking about it.