The Witcher 3: 10 Beginner’s Tips to Help You Succeed 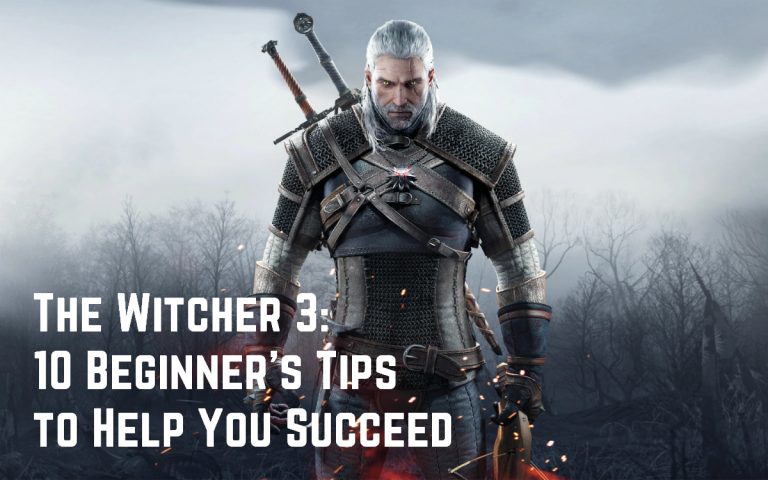 I’m a Witcher, not a gigolo.

Almost 24 hours into my journey around the Northern Kingdoms, I realised that The Witcher 3 had completely captivated me. I was minding my own business beating up pirates on a beach (as you do) when I came across the

washed-up carcass of a whale. Not sure how that became the catalyst for me staying up and playing until 5am, but it was and I have barely looked back.

Even on the regular difficulty setting, The Witcher 3 is a hard, unforgiving game. Death is an inevitability in the early parts of the game and when you combine this with the less than immediately approachable controls, bewildering story and a scale which is almost too grand, first-time players to the series might be forgiven for giving up early on. Persevere with it though and you have an early contender for Game of the Year.

If you’re struggling with the mad adventures of Geralt and need some guidance, here are ten Witcher 3 tips to set you off on the right track. Now where did my dumbass horse go…

1. Be prepared to die. A lot.
In the early stages of the game (and especially against that goddamn griffin), you can expect meet your end a lot. Similar to Dark Souls, it can seem like the game is designed to separate the wheat from the chaff right from the off. Rather than throw your controller into a nearby lake, learn from where you went wrong and plan accordingly for the next time.

2. Don’t try and win every fight.
There’s no denying it: Geralt is a bit of a ladyblossom at the start of the game. Get caught up in a vicious combo and you can be sure that you will be asked to reload your last saved game pretty soon afterwards. Drowners are absolute cretins for low-level players still in The White Orchard, so be sure to pick your fights wisely.

3. Pick everything up. Yes, even that.
Currency is a scarcity in the early parts of The Witcher 3 but you don’t really need it that much until you progress to the next region. However, you should set yourself up for success by picking up literally everything you can find before shifting it onto the hapless local merchants for a few guilt-free coins. Animal hides are particularly pricey, which brings me onto the next point…

4. Cheat the system.
The Witcher 3 isn’t without its bugs and cheap exploits and you won’t find better evidence of this than in The White Orchard near Woesong Bridge. If you find yourself in the company of two cows in the first village, kill them. Then meditate for two hours. And then kill them again. Soon you will have amassed a grisly stockpile of loot which you can then sell on for some dirty coins and the townspeople will be none the wiser. Check the video below for more details.

Thanks to fellow vulture Alex Davies for the tip.

5. Explore everything.
It’s lucky that CD Projekt Red have created such a vivid, expansive landscape as you’re going to spend a lot of time exploring it over the course of the game. Find as much as you can early on in The White Orchard and hunt down every Place of Power – it’s the easiest way to get ability points in the game, leveling up takes an age and a half.

6. Failed? Come back to it later.
Unless your quest is a time-sensitive one, there’s no need to rush things by trying to do everything in one go. Keep getting battered by a werewolf? Drowners getting you down? Forget about them: go and explore the huge world and come back much stronger next time.

7. Get booksmart.
The game’s codex is a little bit hard to digest all at once (much like most action RPG’s), but you should always pick up an unfamiliar book or strange note. Even if you don’t take the time to read through them yourself, the information will always be there for you later and can even lead to new quests or give you the strategy to crack one that’s become a nuisance.

8. Draw your enemies out.
Attacking groups of enemies at once is one of the quickest ways to get yourself killed in The Witcher 3, but there is a little exploit that can help you. The AI isn’t exactly always the best (random horses appearing in cutscenes etc) and is something you can definitely take advantage of in combat. Isolating your enemies away from the pack gives you the opportunity to pick them off one-by-one and is especially effective against monsters.

9. Learn the menus, as hard as it may seem.
I am not going to lie here, the interface of the game is kind of terrible. It’s one of the only real negatives to draw from The Witcher 3 and can be a major source of confusion; logic doesn’t really play a part in the way it’s designed. I went a good few hours without realising I could upgrade my gear! Take your time to acquaint yourself with the menus at the beginning of the game and you should be setting yourself up well to prevent headaches.

10. Don’t take it too seriously.
Having never played the first two Witcher games, I have literally no idea what is going on most of the time, but that’s okay. It’s a wild, sometimes silly, often unbelievable ride that will have you gripped almost immediately, so suspend your disbelief at the awkward sex scenes and innumerable bugs and just take it for what it is: the best of its kind since Skyrim.

The Witcher 3 is available now on Playstation 4, Xbox One and the Master Race.