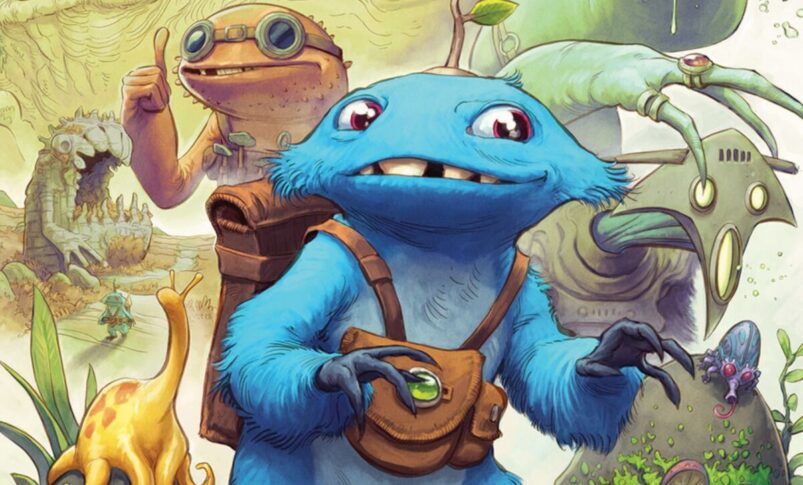 Fantasy comics swing for the fences. They usually introduce entirely constructed worlds, complex magic systems, and fictional creatures with unique traits. Because of this, the fantasy genre can often discourage readers who can’t make their way through the byzantine labyrinth of stories that throw all the rules of the reality we know out the window.

Yet fantasy bursts with innovation and breathtaking creativity. It is for these same reasons certain readers are drawn to the genre where realism and imagination intersect in an accessible manner. Written by Skottie Young, illustrated by Kyle Strahm, colored by Jean-Francois Beaulieu, and lettered by Nate Piekos, Twig #1 from Image Comics communicates its fantastical story through its open world video game visual quality.

Twig #1 opens on what feels like an introductory cutscene in a game. We meet the anthropomorphic, fuzzy blue protagonist Twig on the morning advent of his first day as the new Placeling adventurer. Akin to Alice in Wonderland’s White Rabbit, Twig yelps about being late. First, he cheekily berates his fellow snail-like companion Glup for not waking him up on time, and then hurriedly discusses his tardiness with various other inhabitants of his world as he runs across the fantasy woodland landscapes to check into his job.

Immediately, Twig #1 bustles with activity. The environments and characters Twig interacts with offer an astounding level of innovative detail. Readers gain the sense of an open world game structure through the small details, such as wayward comments from “NPC”-adjacent passerbys toward Twig and the large scope of the world they traverse within the first few pages. Additionally, the comic’s opening scenes follow a repeating horizontal three-panel grid structure. These lush landscape sequences bursting with color and intricate design work show off the kind of free-roaming game capabilities that seem plausible in Twig’s universe.

When Twig finally arrives at work, the road tapers off into a cliff overhang. The scene calls forth impressions of Zelda games, such as Breath of the Wild or Skyward Sword, where players reach the edge and therefore must find a skyward or fast-travel way to continue their journey. In a comic book, you obviously don’t need to press a button to interact with another character. But the cut to a glorious splash page where the gigantic humanoid mountain Mount Guphin bellows at Twig’s lateness calls back to being asked to “Press X to Talk.”

After a gentle scolding tinged with wise advice about how wasting time is unacceptable when the world and worlds beyond depend on Twig, Mount Guphin rolls out his tongue to bridge the gap between the cliff and himself. Yes, Twig’s journey begins when he literally walks inside a talking mountain. Once again, adventure awaits for both Twig and the reader as he navigates the darkness inside Mount Guph.

As Twig’s ultimate objective gradually focalizes, readers cherish the elements facilitating an open world exploration. Twig must converse with the knowledgeable side characters to collect items and extract helpful tidbits of information that hint at the next steps in his journey. Our furry friend loves cooking and prepares food for himself and Glup. Twig and Glup make the perfect pair as they discuss each step of their expedition with one another and enjoy a quick meal, reminding me of the Hunters and their Felyne Palicos in Monster Hunter video games. There’s not much more endearing than cute animal characters making food like a human.

Each panel is an invitation to readers to spend time reveling in each stunningly crafted environment. Soothing colors permeate the comic. Everything is washed in soft pastel tones, devoid of rigid linework. As such, Twig’s world feels unconstrained by borders or boundaries, opening up the idea that the creators could have Twig trot through this fantasyland until their imaginations cease creating this vivid wonderland.

Social media posters often posit questions like, “If you had to live in the last video game you played, what would it be?” If Twig was a video game, I’d want to spend forever inside its sweeping topography.

This comic moves Twig through each scene with dexterity. Its balanced focus on both movement, character development, and slow-burn narrative emanates the impression that the readers nearly exert some influential control over Twig’s story, analogous to a video game protagonist. As a fantasy miniseries, the door of possibility opens wide in an appealing story for readers of any age level or genre interest.

Twig is an adorable character wielding a little knapsack who needs to store items to further his journey as an adventurer. Perhaps we’ll see him level up in abilities or earn some armor for him to wear during his quest exploits in further issues? Potential seems infinite in the charming video game-adjacent fantasy dimension in Twig #1.