Pass the run-up to Christmas with some of December's new TV. 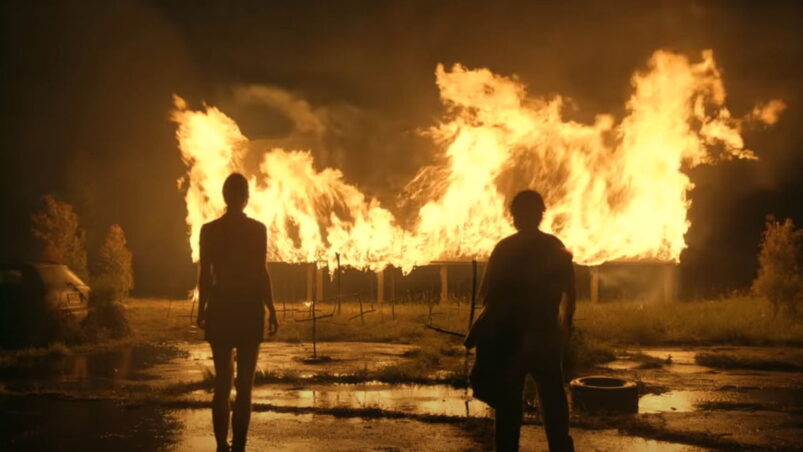 So, December, eh? A load of tinsel and sparkly lights making a game effort to disguise the fact it’s the darkest, coldest time of year. In the media, of course, it’s all ultimately tinsel and sparkly lights, one big sustained distraction from real life, however bleak the weather might be. Quite apart from the usual slew of Christmas episodes and holiday specials, which all have some sort of heartwarming message or something, here are the biggest new TV shows of December 2021.

Digging up the garden and finding dead bodies is always an unprepossessing experience. When it turns out the bodies are the wife’s dead parents, well, then you know there’s a storm coming. As Oscar Wilde once said, “to lose one parent may be regarded as a misfortune; to lose both looks like carelessness”.

The unfortunate – or possibly unreliable – central couple are played by theatrical heavies David Thewlis and Olivia Colman, both of whom have fine turns in the kind of creeping, subtle nastiness a story like this calls for. Remarkably, it’s all based on a true story, and the real couple still maintain complete innocence, so I’m legally constrained in how I describe it. And who knows, maybe they’re even telling the truth.

Watching director Will Sharpe’s excellent, heartbreaking comedy Flowers, I found Olivia Colman’s part to be – shameful to say – the weakest material present, existing in a kind of isolation booth from everything else that’s going on. But given their respective track records, I’m more than prepared to give this combination another chance, and you should be too.

Famously, Blazing Saddles was such a thorough parody of the Western film that it practically killed the genre off. Even a renaissance time like 2018, with The Ballad Of Buster Scruggs and Red Dead Redemption 2 preeminent in the year’s pop culture, still had a sly, parodic edge to it all, undercutting a genre that hadn’t really been done straight for a good, long while.

All told, the only route nowadays is the contemporary Western, which Joe Pickett so clearly is it’s painful, dripping in wide open ranges, lone riders, stetsons, and rich out-of-towners up to no good. The underlying dynamics, not least of the main character’s earnest white-hat, don’t need to change that much whether in 1821 or 2021. Cattle drives, buried treasure, all that stuff, a little smartphone isn’t really going to make much difference to that.

Joe Pickett began as a series of novels, whose fans have been champing at the bit (little horse-riding analogy there, folks) for a screen adaptation ever since – well, at the very least before the abortive first attempt in 2016.

A sort of Cheers for the gentrified 2020s, the backdrop of an ordinary bar gives way to a wine bar – although with an emphasis on dating and love lives it’s probably leaning more Friends.

It’s created by Phil Augusta Jackson, who’s previously written for Brooklyn Nine-Nine and Insecure, which should give you a little taste of what this’ll be like off the bat. Gentle quirkiness, running gags, character archetypes – fans of any of the main cast of Nicole Byer, Carl Tart, Echo Kellum, Justin Cunningham, Aaron Jennings, and Grasie Mercedes can probably have some fun in advance trying to put a name to a space.

This post-apocalyptic drama explores life in the aftermath of a pandemic, as if to tempt fate – or possibly to say ‘hey, could have been worse’. Oh yes, this one depicts a real pandemic, one that shakes up global society and has background music, rather than a sissy one like Covid which has only killed a few million people.

Although it’s mostly set after the pandemic’s done its worst damage, Station Eleven will skip hither and yon in its chronology, which will probably be the most reminiscence-prone part of it. Remember how we thought it’d be for two weeks? Remember how the restrictions swayed wildly from one extreme to the other? Remember how people just stopped caring? Ahh, memory lane.

The press are wondering in pure pearl-clutching style whether we are ‘ready’ for a show about a pandemic – a particularly flimsy line of thought, given as plenty of films were made about World War 2 while we were still in the middle of fighting it. What we’re ready for is a work of fiction that gives us a fresh take on pandemics, rather than the viewpoints we are by now all too familiar with.

The Mandalorian may have literally given away its most obvious ratings draw to a CGI Luke Skywalker, but have you ever known Disney to give up on something that’s still profitable? So the adventures of Pedro Pascal’s Mandalorian gives way to the adventures of our old friend Boba Fett, and his young, sexy assistant, which creates a weird sort of Doctor Who-ish vibe.

The more casual fans probably assumed this was what The Mandalorian was in the first place, and nobody could fault them for simply carrying along the same wild-westy train tracks. Adventures of the week, plenty of action, recurring bad guys, and all the regular special guests that Disney’s limitless pocketbook can engulf.

The issue here is that ever since Disney appropriated Star Wars, the side projects (The Mandalorian, Rogue One) have tended to be a lot better-made and better-received than the main events (the sequel trilogy). Now that they’re throwing their bottomless resources behind the TV work, is that going to fall victim to the same curse – being racked, flayed and quartered across hell’s own series of focus groups?