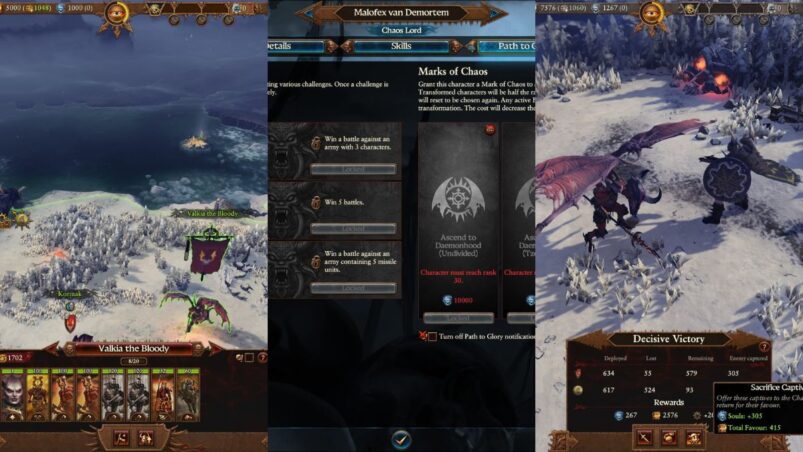 Since Chaos is in the spotlight of Total War: Warhammer 3’s narrative and gameplay, it was only a matter of time that Creative Assembly would’ve brought the much-maligned Warriors of Chaos up to the standards of the third installment. With the launch of the Champions of Chaos DLC, this faction gets a massive facelift. This rework is in fact so massive that we had to separate into two guides.

Here’s everything you need to know about the new Warriors of Chaos resources and special features in Total War: Warhammer 3.

Just like most factions across the Total War: Warhammer series, the Warriors of Chaos get their very own unique special currency – Souls. Souls are earned through killing mortals of all kinds, be it in battle or taking over settlements. This essentially disincentivizes you from fighting the Daemonic factions of Chaos as they offer little in the way of Souls.

Some legendary lords also have additional ways of earning souls that suits their particular playstyle.

Souls are primarily used for the Gifts of Chaos and Paths to Glory features (see below). Occasionally they may be needed for events to trigger some kind of positive effect or mitigate a negative one.

Since the Warriors of Chaos are the non-Daemonic followers of the Chaos gods, they lack the full breadth of magical abilities and features of their immortal counterparts. However, the mortals can petition their patron gods for support to grant them powerful gifts to help spur on their dark crusade.

Every legendary lord will have their own customized Gifts of Chaos menu, found above the End Turn button. In this menu you’ll see slots shaped to the symbols for each of the four Chaos Gods and Chaos Undivided. In an unlocked slot you can place a Gift of Chaos by paying a fee in Souls up front, as well as a consistent upkeep to maintain the gift’s effects.

Not every Warriors of Chaos legendary lord will have access to all gods, as some lords are already dedicated to a specific god and can only receive gifts from them or from Undivided Chaos.

Gifts of Chaos can grant all sorts of effects – from supplying you with a steady source of gifted daemonic units to fold into your armies, to giving factionwide buffs to replenishment the economy or another facet of your empire. It takes at least one turn after activating a gift for its effect to grace your faction, but these gifts are flexible and can be easily swapped at any point, as long as you can pay the Souls fee and upkeep.

You can unlock new gift slots through the technology tree, while unlocking wholly new higher level gifts will require you to spend souls in the Paths to Glory system.

The Paths to Glory system affects your lords and heroes and acts as an additional way you can evolve your characters and customize them. The first portion of this feature is that every character is randomly granted three Boons of Chaos titles once recruited, similar to the Ogre Kingdoms Big Names, that provide additional stat boosts or abilities once they’ve been unlocked. To unlock these boons, you’ll need to perform a specific action or number of actions.

The second part of this system is that, just like Chaos units reaching a particular rank and upgrading, once a lord or army commander reaches a set rank, you can spend a large sum of Souls to have them ascend to Daemonhood and become a Daemon Prince. They’ll essentially become a whole new unit with their own skill path and abilities associated with one of the four Chaos gods.

However, the Paths to Glory system fully comes into effect if you have the Champions of Chaos content pack purchased as it gives you additional options that affect your lords and even heroes. Instead of having to grind your way to Daemonhood to fullfill your Path to Glory, both lords and heroes once reaching a particular rank, can be marked or devoted to one of the gods.

This will reduce their current rank a few levels, but they essentially become a whole lord or hero type that could give you access to abilities you may not have had initially. Luckily, even if you devote a lord to a path they can still ascend to Daemonhood.

One of the simpler systems introduced in the Warriors of Chaos rework is Authority. Based on skills, technology, or characters in a lord’s army they’ll have a number associated with Undivided Chaos, as well as with one or all of the gods.

This number grants you positive or negative effects the higher or lower the number, respectively, that affect units affected with that faction of Chaos only. Authority typically affects unit replenishment, upkeep, and other army stats.

Finally, the Warriors of Chaos have also had their approach to Diplomacy retooled. The Warriors of Chaos can now engage in diplomacy just like the other races, though many factions will have negative relationship penalties, as Chaos isn’t exactly cuddly, cute, and in the business of making friends.

The main distinction of this faction’s diplomacy is how they relate to Norscan tribes, the most steady supply of allied mortals. When a Warrior of Chaos lord takes over the last settlement or the capital of a Norscan tribe, they have the option of subjugating them into vassalage.

Also, you can gift regions to your vassals associated with their faction. You can check the region allegiance by looking at the symbol next to a settlement’s name on the campaign map.

Otherwise, Warriors of Chaos can vassalize other factions normally through conquest or wipe them from the face of the map – your call.

The Warriors of Chaos are now a fully-fledged and exciting faction to finally playthrough in the Total War: Warhammer series. How will you bring about the End Times and please the Chaos Gods?