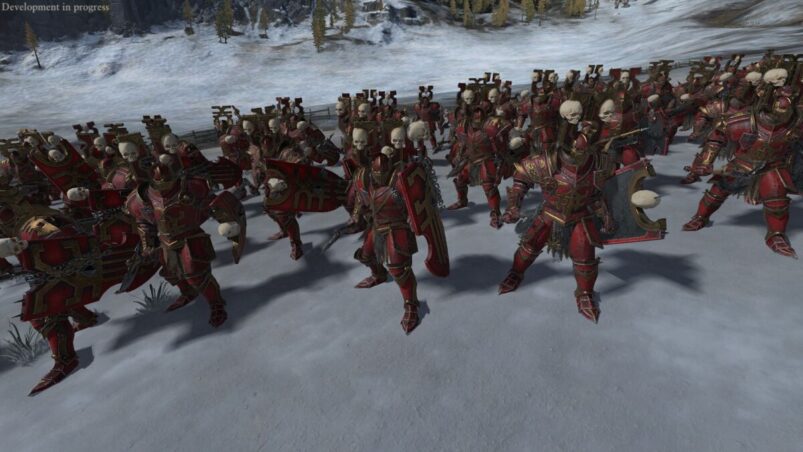 The followers of Chaos are undoubtedly the big bads of Total War: Warhammer 3’s narrative. At launch, Creative Assembly spotlighted the Daemonic denizens of the Chaos Realms, but with the first paid content update, the focus shifted to the mortal followers of Chaos. The Champions of Chaos DLC pack succeeds in almost overshadowing the base game factions with the introduction of a huge rework of the Warriors of Chaos.

The Champions of Chaos DLC brings with it four new legendary lords that are part of the Warriors of Chaos faction. However, each of these lords has committed themselves to a particular god and so share some campaign and battlefield mechanics found in the Daemonic factions of Chaos.

Narratively, these lords follow their own story, competing with each other to discover a place of great magical power and become the chosen champion of Chaos. The story of these four lords essentially acts as a mini-sequel to the base game’s narrative. Ironically, though it adds double the number of lords compared to previous lord packs in the series, as well as god-specific variants of vanilla units and characters, the DLC itself isn’t particularly revolutionary and falls within expectations.

However, what uplifts the DLC by several levels is the comprehensive and complete rework of the Warriors of Chaos faction and how they function in the campaign. It’s safe to say that the debut appearance of the mortal followers of Chaos in the first Warhammer installment was a serious mishandling of this fan-favorite faction, so a respectful and thoughtful overhaul has been much anticipated and a long time in the making.

Perhaps the biggest highlight of the Chaos rework is the recruitment system that adds new mechanics and features that are both distinct and thematic to the faction, while also pushing boundaries of what Total War can do with its army mustering elements. The Warriors of Chaos now essentially have three different sources of unit recruitment, one of which is geography-dependent, while another acts as a kind of evolution feature where your troops transition into new forms based on their experience gained in battle. This system is an improved form of the Amazon recruitment options from A Total War Saga: Troy.

From a world-building standpoint, this is a great way to illustrate how the mortal armies of Chaos are constantly morphing, growing, and evolving threats to the rest of the world with hosts often composed of units following different gods, while fighting alongside the occasional Daemon ally. It truly feels like you’re playing a force that’ll eventually bring about an apocalypse and remake the world in the image of the dark gods.

Gameplay-wise, this new recruitment system adds welcome layers of strategic and tactical decision-making when it comes to army composition and campaigning. More flexibility in how players can customize their armies lets them invest more into their well-being and combat effectiveness.

Just to make the Warriors of Chaos feel that extra bit more special compared to their Daemonic brethren, these factions can now harvest souls from slaying mortals in battle. These souls can then be used to acquire gifts from the gods, as well as to devote your own lords and heroes to follow specific gods and ultimately ascend to the status of Daemon Prince. This just adds even more customization options for your campaign and will make sure that playing as the already present Warriors of Chaos lords won’t be the same every time you pick up the game.

Finally, the Warriors of Chaos approach settlements in a new way, where instead of taking provinces and building an empire like most of the other factions in Warhammer 3, you’ll now focus on taking and developing Dark Fortresses that are dotted around the map. These will act as bases of operations from where you’ll range out and bring ruin to the world to please the Chaos gods.

All-in-all, the Champions of Chaos DLC, and more so the massive free update, is an example of CA firing on all cylinders in bringing something truly meaningful and thematic to a faction that’s desperately needed some love for a long time. This update has arguably made the mortal Chaos factions the most fun out of all Daemonic and mortal factions associated with Chaos, which is quite a high bar to pass.

However, we can only recommend Champions of Chaos to massive fans of Chaos or those interested in a particular character from the lore. Otherwise, if you already own all previous Warhammer titles, you can just as easily enjoy the Warriors of Chaos and their new features with the characters already in the game.