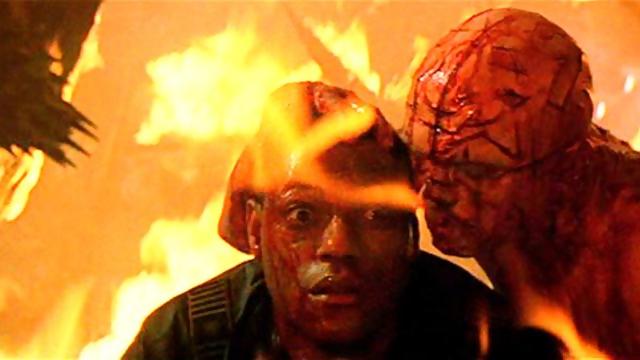 This wasn’t easy for me. For more than just the fact that I lived with night terrors, brought on by each of these scenes played over and over again for over 6 months, having to then rehash them for you bastards, and find gifs…*shudders*. I really hate you all right now. But this was my choice, don’t let my misplaced blame turn you off from reading this.

Now, just to clarify, and even though I know saying this won’t make a difference (I look forward to ‘you missed out [insert film title here]’ comments), these are the things that scare the living shit out of me. These are my ‘dead boy in the corner of the room pointing at Japanese woman crawling across my cieling’ moments.

Woman crawling across the floor in Tale of Two Sisters

And straight to some crawling. This Korean masterpiece is beautifully filmed, perfectly cast, and even the score is wonderful. A great horror, lending elements from standard ‘long hair scary women’ Japanese horrors, with a painfully heartbreaking reality of psychosis. So, there’s this one scene, with a woman crawling across the room from the head of their bed and she like jerks up like a puppet and UUNNGGGHHHHHH I HATE IT.

I hate it for more than just that though. It lied to me. It was so beautiful and peaceful and I thought it was somewhere the characters could live, happily. But it lied to me throughout. Nothing in this film is what it seems.

Sadako crawling out of TV in Ringu

‘OH THE RING! I LOVE THAT FILM SO SCARY LOLOLOL’

No. The Ring, despite starring the beauty Naomi Watts, is horse(haha!)shit. Ringu, with the beautiful Yuko Takeuchi is a fucking masterpiece. The way it’s filmed, the sound, the TIMING. The video you watch which seals your fate is terrifying enough as it is, to then be subjected to the creature in it as she crawls out of your screen and into your reality, is beyond any coping mechanism I know.

I watched this ALONE and IN THE DARK because I thought I was hardcore. Instead I realised I wasn’t, went to bed, put on my TV for comfort and MY TV SWITCHED OFF I HAVE NEVER BEEN SO TERRIFIED (the fuse blew…fucking timing).

There’s no point doing a ‘scary things’ list and ignoring The Exorcist. Especially since I watched it at such a young age. There are a few moments in this that I found myself mumbling ‘no no no no stop no’, and the part where she crawls backwards down the stairs and screams blood everywhere…like how are we all still alive? There’s also the ‘demon face’, that suddenly appears on the screen when YOU DO NOT EXPECT IT.