Thymesia: How To Beat The Hanged Queen 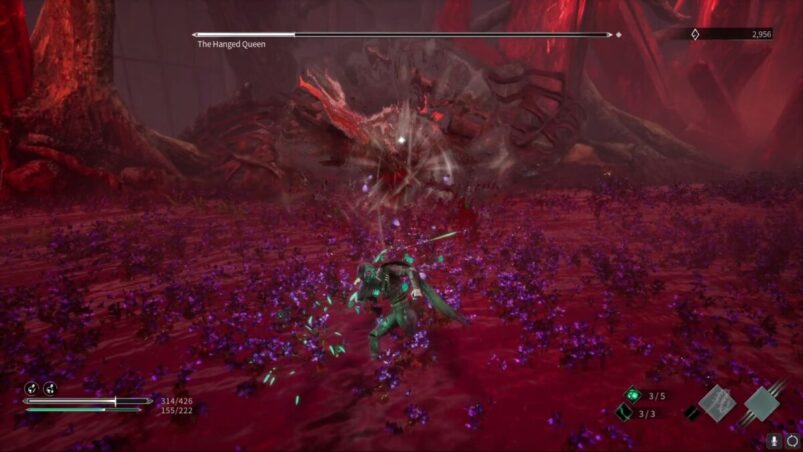 The second boss you’ll encounter during Thymesia‘s story is The Hanged Queen. This giant bat creature is highly mobile and will constantly swap sides of the arena during the battle. While this can be shocking to go up against at first, it becomes little more than a nuisance in the long run. Here’s how to get around the vast majority of The Hanged Queen’s high-flying antics.

The giant flying bat, The Hanged Queen, is a test of your dodging prowess more than anything else. Parrying can net you few game-changing advantages in this fight, however, as most of the attacks thrown at you will be ranged or crushing blows from above. Ranged attacks don’t offer much advantage when parried, meaning you’ll want to be rushing down the boss most of the time. Though scouting out the few parryable combos is highly advantageous during this fight, your dodge is going to be what nets you the most mileage.

You’ll want to take plague weapons and talents that keep Corvus mobile throughout the fight. The boss will constantly fly from one end of the arena to the other and shift large distances to either side under pressure. This makes the Axe and Whip excellent choices, especially if you can farm out the Whip’s Extended Action. Hitting The Hanged Queen with the tip of the Whip is easy and moves you right next to her, while charging in with the Axe is a great move to maintain momentum after dodging large distances. While the Whip can get you next to her in an instant and is easy to land tipper hits, the Axe is a better choice if you just want a way to get in for free.

The talents that work well against the giant bat are ones that keep up your aggression and keep you mobile. This makes Long Dodge and Feather Teleport perfect for this encounter, as both close the distance well against the high-flying boss. While Long Claws works well to close distance, Short Claws is a much better overall option since your plague weapons and dodges should compensate for the distance you’ll have to travel.

The damage buff from the Offensive bonus you get from landing combos using Short Claws will also go a long way in making each time you catch the bat count. If you choose the Short Dodge talent, you can double down on the Offensive buff and almost always have maximum stacks of it. The Hanged Queen has an attack where she slams in front of her with her claw, then scrapes that claw backward which is the perfect time to dodge around her to get the buff using a dodge.

The Hanged Queen has a couple of key moves you can parry, but the one that nets you the biggest advantage is when she drops from the sky. If you’re able to tail the queen while she’s in the air, don’t be afraid to position yourself underneath her. Parrying her violent crash back to the surface means you can instantly start your offense and begin to rack up wound damage with your basic sword combos instantly.

Beating The Hanged Queen is much more about closing distance and dodging projectiles than anything else. Getting up close and personal is the best way to do this, but other plague weapons such as the Spear might be useful if you’re having a hard time getting to her after she takes flight.