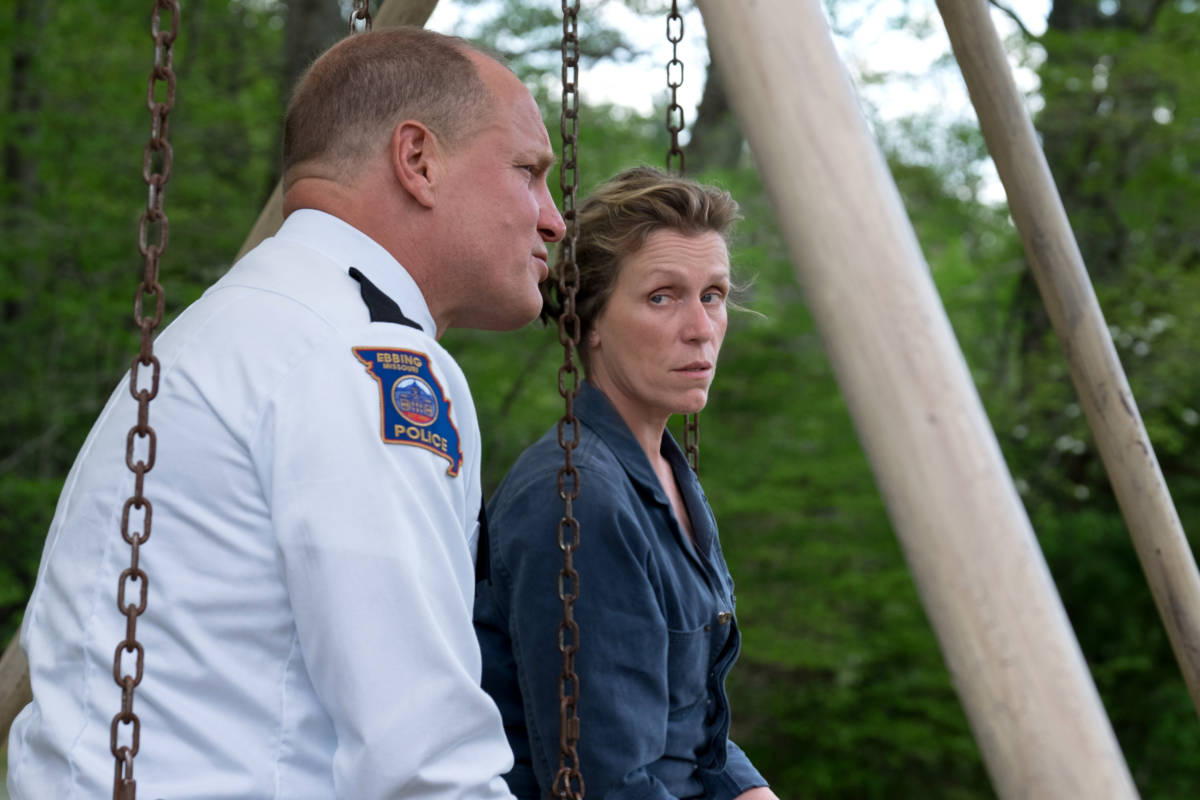 Three Billboards Outside Ebbing, Missouri is the dark comedy that Suburbicon wanted to be. Tonally, the film hits on an edgier level than the Coen Brothers’ Fargo did in 1996 and pushes the surface even further.

Martin McDonagh directs the film from a screenplay that’s able to balance the serious content with the edgy humor it pushes for out of the performers.

Frances McDormand stars as Mildred Hayes, a divorced mother struggling with the death of her daughter, Angela. She’s a strong woman but she’s still dealing with some unresolved issues. With no suspect caught, Hayes takes things into her own hands by storming into town and renting three billboards from advertiser Red Welby (Caleb Landry Jones) on Drinkwater Road that lead into Ebbing, Missouri. It’s a little used road that nobody uses unless they’re lost. These billboards are directed at the chief of police, William Willoughby (Woody Harrelson), and one police officer, the man-child James Dixon (Sam Rockwell) takes things way too far.

The working relationship between Chief Willoughby and Officer Dixon makes for a laugh-a-minute as the two play off of each other. As immature as Dixon may be, the humor shows through as he’s mature enough to know better than to use certain words but is still immature enough to use other words. Give credit to Rockwell’s ability to add such child-like behavior and obnoxiousness to the character. Dixon comes off as an asshole but he truly does care about his job and doing it well.

If the Ebbing police force wasn’t enough, Hayes has to contend with her ex-husband, Charlie, (John Hawkes), and his 19-year-old girlfriend (Samara Weaving) while ignoring her son, Robbie (Lucas Hedges, with not-so-meaty a role as in Lady Bird), in grief. There’s a sense of an abusive past between Charlie and Mildred.

Inspired by John Wayne and the Spaghetti westerns, McDonagh has written a heroic role for McDormand in Mildred Hayes. She’s able to play the character with the right amount of darkness and just the right sensibility. Even though there might not be any shootouts like those films, Hayes can throw a good Molotov cocktail when necessary. Hayes doesn’t back down against Willoughby, Dixon and the rest of the town even as they are trying to do everything possible to get her to stop. Hayes even wears the same outfit so as to give off the vibe that she’s at war. This is a role that’s usually reserved for men because women aren’t usually the ones to resist against an entire town.

For Three Billboards to work as well as it did, the comedy had to succeed and it does. For such dark content, McDonagh had to balance the humor with the emotions. He does it so well that one might confuse it for one of the better-made Coen Brothers films. That’s how well it hits on the tone.

Harrelson’s delivers what is by far his best performance on screen in 2017–a year that has seen him play a colonel in War for the Planet of the Apes, an alcoholic father in The Glass Castle, and the president in LBJ. Willoughby is fighting his own battle and the entire town knows it. He’s devoted to his wife, Anne (Abbie Cornish), and their two young daughters. The Cheers alumnus brings a sense of decency to the role as well as the humor that’s come to be expected from him.

Paying homage to American folk music, Carter Burwell’s score is a nice fit to capture the film’s tone and there’s some recurring themes that play along. Cinematographer Ben Davis, influenced by the 1970s feel, captures the rural landscape that plays to the dramatic and shoots characters in a way that plays to their emotions.

With strong acting, directing, and writing, Three Billboards Outside of Ebbing, Missouri is everything one looks for in a movie. Run, don’t walk, to see it.