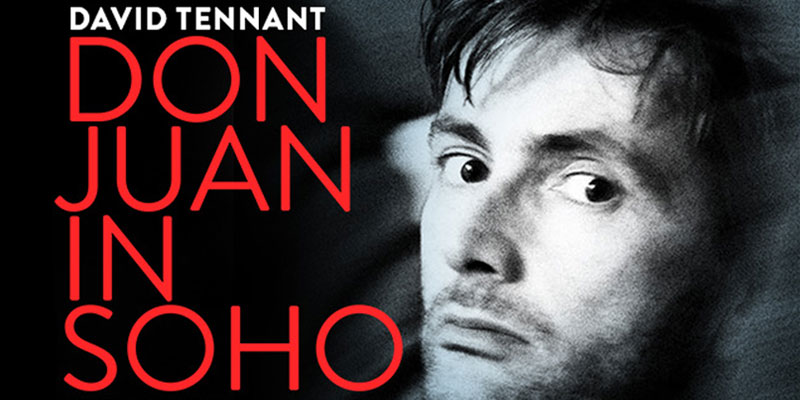 Showing for a limited run only at The Wyndham’s Theatre, Leicester Square, is Patrick Marber’s fresh new update of Don Juan in Soho, with Doctor Who and Broadchurch star David Tennant in the title role. The run so far has received very mixed reviews but I think it’s fair to say that a morality play about a raging misogynist and sex addict is probably doing something right if its audience is thoroughly divided by the end of it. In fact, I would say its triumph is its ability to make you hate, love, sympathise and despair at the character of DJ (nee Don Juan).

The show largely centres on the comedic master/servant relationship between DJ and his loyal chauffeur/manservant/companion Stan, played fantastically by Adrian Scarborough. Despite our introduction to this relationship whereby DJ gets Stan to pass him his can of coke sitting on the arm of the very chair he’s sitting on and then repeatedly expects him to light his cigarette after putting it out in various interactions with a beautiful hotel assistant, you do somehow buy into this relationship. It’s this that keeps you motivated to stick with the story. The story arc itself is occasionally lacking in places as we see DJ breeze his way into the hearts and pants of various women but the lack of narrative is easily forgivable thanks to the charm of the character and the boundary pushing comedic devices. Seeing DJ receive a blow job while hitting on the bride of the man he’s just put in a coma shouldn’t be funny, it really shouldn’t, and yet…

Thanks to the charm of David Tennant’s acting ,you’re really driven into a love hate relationship with the titular character. At times he almost seems the hero “I’m not a rapist…I don’t grab them by the pussy” (massive applause from the audience there) and then as quick as you feel sympathy he’s suddenly luring a homeless Muslim man into blaspheming against Allah for £1000. A brilliant touch really as this scene was censored out of the original Moliere play – one of many nods to the classical theatre that still brings it into the modern world.

There are a few ways in which this production really excels. I really enjoyed the opening sequence with masquerade masks and statue and the classical architecture which suddenly burst into colour and sound and light and hugely set the scene as being not your everyday classical theatre. The humour, while too crass for many, I felt was a nod to the rough and ready, uncensored streets of Soho. It’s also worth bearing in mind that we live in a society that is not so easily shocked and that Moliere’s play would have been shocking to his audience. The set was cleverly done, largely resembling an upmarket hotel suite but occasionally adapting to outside scenes featuring moving statues and a flying pedicab and eventually being struck completely for the tragic and desolate ending.

My only complaints about the production come from the recent spell of shows that seem to do this thing of appealing to TV audiences and almost dumbing down their content and throwing in unnecessary razzle dazzle just in case the modern theatre goer opts for checking Instagram instead of paying attention to the stage. Yes, I’m looking at you National Theatre.

For the most part, Don Juan in Soho has enough clever moments to sate the serious theatre goer, an early reference to commedia dell’arte made me feel welcome, but unfortunately the addition of a brightly coloured song and dance routine for the ending felt unnecessarily distasteful. I appreciate that dancing around DJs bloody corpse is a pretty surefire way to show how meaningless his death is and how unloved he really was, but for me that moment hit home when even Stan had left his side when he died. This song and dance routine ending was unnecessary and for the love of god, does the west end really need another happy clappy we all clap along together ending? Really? I can stomach it when I go to see Mamma Mia! Not when I go to see one of the world’s best tragedies, no matter how modernised.

I definitely recommend seeing Don Juan in Soho while it’s on. You’ll go for Tennant, you’ll stay for the writing and in the end you’ll have cried with laughter and despair, and you’ll feel all the better for it, if a little morally puzzled.

Verdict
Brilliant experience, occasionally sells out for the modern audience.
9
Cultured Vultures is a pop culture website established in 2013 covering all things gaming, movies, and more. We eat your words.
All The News On The Biggest Games