The Umbrella Academy Proves The Limitations Of Comics Adaptations

When you go from ink on paper to live-action, inevitably things get lost in translation. 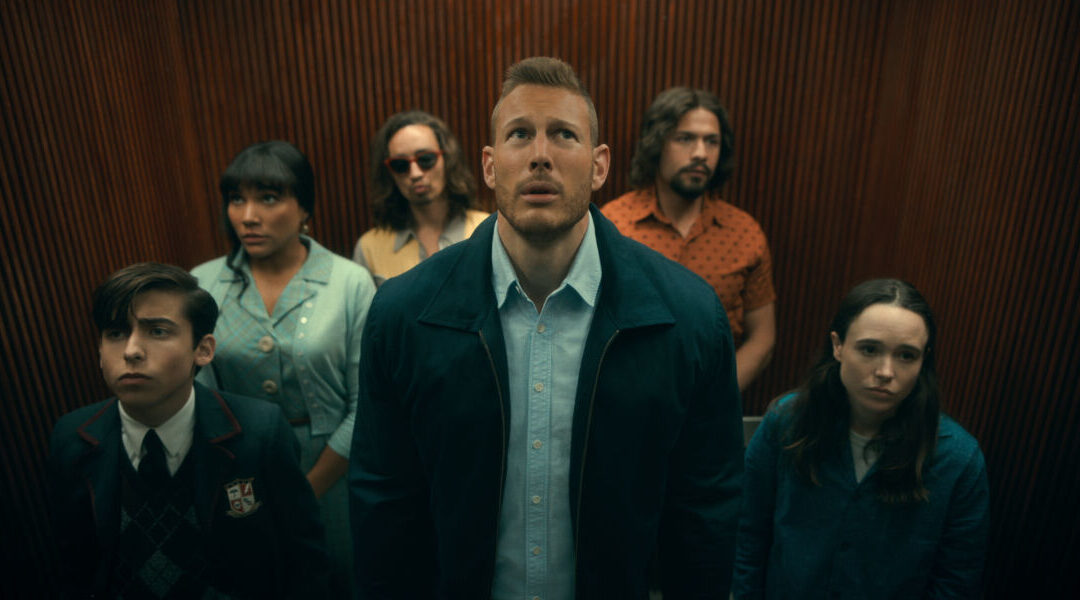 ‘Adaptation’ is a complex word. In biology, it’s when an organism takes on new traits to survive in a different environment. In entertainment, the meaning isn’t actually all that different.

To make the jump from book to film, or film to video game, or cartoon to breakfast cereal, the story must adapt to its new medium if it hopes to survive. For Netflix’s adaptation of The Umbrella Academy, the Dark Horse comic by Gerard Way and Gabriel Ba, these adaptations involved stretching the story across ten episodes per season: a lot more story to fill than the twelve issues of the comic’s first two volumes, which you can read in less time than it takes to watch two episodes of the show. However, The Umbrella Academy’s jump from comic to screen also meant compromising its imagination – and these compromises highlight the imagination and room for spectacle in comics that just cannot be reproduced in live action.

As a case study, let’s examine the openings to both versions of the Academy: in both iterations, we’re introduced to the immaculate conception of 43 infants at the same time on the same day, with no explanation, and how the eccentric billionaire Reginald Hargreeves sets about adopting as many of these mystery babies as he can — ultimately claiming the seven who will grow up to be the titular Umbrella Academy. The first shot of the show is in a community swimming pool in Russia, where a woman is about to give birth in the water. But by contrast, the first image of the comic is of a professional wrestler dropping an “atomic flying elbow” on a giant squid. In the show, the young super-team’s first public mission is foiling a bank robbery. In the comic, it was fighting Zombie-Robot Gustave Eiffel, architect of the Eiffel Tower (which turned out to be a spaceship). You may be detecting a difference in tone.

There’s an obvious explanation for these changes: money. In a comic book, to make a character fly, or decide a character is flanked by floating killer robots, all the artist need do is draw it. In live action entertainment, the process has a lot more steps: each character gets cast, then gets their contract negotiated, then costumes have to be fitted, then the scene has to be shot, then visual effects has to come in and do their own entire process…and every single of the step of the way, more people have to be hired, which means searching for talent, negotiating contracts, and endless other gears turning behind the scenes. So in the end, can we blame Netflix for replacing Zombie-Robot Gustave Eiffel with some nameless bank robbers?

For all the pragmatism behind these narrative decisions, one can’t help but feel like The Umbrella Academy lost a little bit of its super-ness in translation. This isn’t meant as a slight against the show: episodes are very vividly shot, and the frequent action scenes are never choreographed dully or phoned in. The Academy still has a hyper-intelligent monkey butler. Season Two introduces a character who is a goldfish in a tank mounted on the neck of a robot. But on the whole, the colors are less bright, the action more grounded by gravity, and the chaotic, frenetic energy of the original comic is dimmed by its new boundaries.

Another example of the differences between Academies is in the character of Luther/Number 1. In both versions of the story, he has superhuman strength and also happens to have his head sewn onto the body of a gorilla. On television, this gives him a hairy, bulky frame and makes him stand a full foot taller than most of his teammates. He hides his gorilla body under thick coats and sweaters most of the time.

In the comics, however, this isn’t an option — because Luther’s gorilla body is HUGE, making him often twice the size of his teammates and almost as wide as he is tall. His exaggerated physicality (the kind of singular silhouette all the characters have, which Gabriel Ba really excels at) signifies his difference from the rest of the group, and the rest of humanity as a whole. Luther’s super-ness is inescapable, undeniable. And while that’s always true for the character in both versions, in the comics the message is so much clearer, like the words on a billboard.

This kind of broad, bold imagery, and the giddy abandon of throwing ideas out without the need to justify them to a producer is everywhere in Way and Ba’s pages. Characters wear their unique spandex crime fighting costumes unapologetically and without explanation. It’s the sort of dynamism especially present in superhero comics that has often stayed relatively intact in animated adaptations, but rarely makes the jump to live action.

Consider the Marvel film, Captain America: Civil War, which fulfilled the cosmic promise of seeing our favorite superheroes, as played by multi-millionaire movie stars, punching each other instead of another generic villain. In the comic version of Civil War, by Mark Millar and Steve McNiven, the schism that splits virtually every Marvel superhero into one of two camps and pits them against one another leads to massive fights full of literally dozens of different characters with outlandish costumes, powers, and decades of backstory.

In the film, about a dozen people tackle each other in an abandoned airport. Is this still entertaining? Of course it is! Ant-Man gets giant! Spider-Man is here, in an MCU movie! But beneath the initial appeal of all these isolated moments, this fight is little more than a handful of characters whose superhero costumes are mostly some variation on tactical gear or an armored suit, in muted grays and dark colors, fighting in a mostly gray and off-gray environment.

The Marvel Cinematic Universe’s relationship with its source material is rife with further examples of compromising its own gonzo imagination in the name of more ‘grounded’ and ‘plausible,’ to a depth and degree deserving of its own article, but one more case study: remember Captain America’s suit from the first Avengers film? Remember how it looked very faithful to how it’s drawn in the comics? And remember how it also looked like a cardigan and a plastic helmet from Party City, no gravitas or iconic presence to be found? The art of adaptation is a tricky balance indeed.

On the topic of The Umbrella Academy’s balancing act between its past and present selves, let’s examine the increased amount of time the show has to fill in each season. Across twenty hours and two seasons, the breakneck pace of the comics would be untenable. And lest any readers feel that this article is arguing the show’s changes are bad, let’s acknowledge that this added runtime gives the characters room to flesh out their personalities and relationships in a way they never really do in the comic, since there aren’t really any moments for the characters to stop and catch their breath.

When season one aired last year, one sequence in particular was a magnet for praise: the spontaneous six-way isolated dance party to “I Think We’re Alone Now,” in which each character has a private dance party in their mansion/base, physically expressing their personalities and endearing themselves to the audience in one moment of joyous cinematic panache. The comics do not have a moment like this. The primary benefit of The Umbrella Academy’s decompression is this added capacity for character moments — seeing these characters have full conversations and unpack their shared pasts and really sit in the complexity of their situation.

Again, there’s nothing inherently wrong about The Umbrella Academy’s shift into the streaming medium. But in order to adapt to its new form, the story has had to jettison many of the idiosyncrasies and stylistic choices that made the comic such a success. By trading off its spectacle and bombast for a looser, more exploratory pace and greater focus on character, television’s version of The Umbrella Academy epitomizes the gamble inherent in adapting comics to the large screen, and all the brightly-colored heart and soul of an original source material that can be lost in the wager.