After the decline and fall of the Marvel TV universe, The Umbrella Academy is here to take up its mantle. 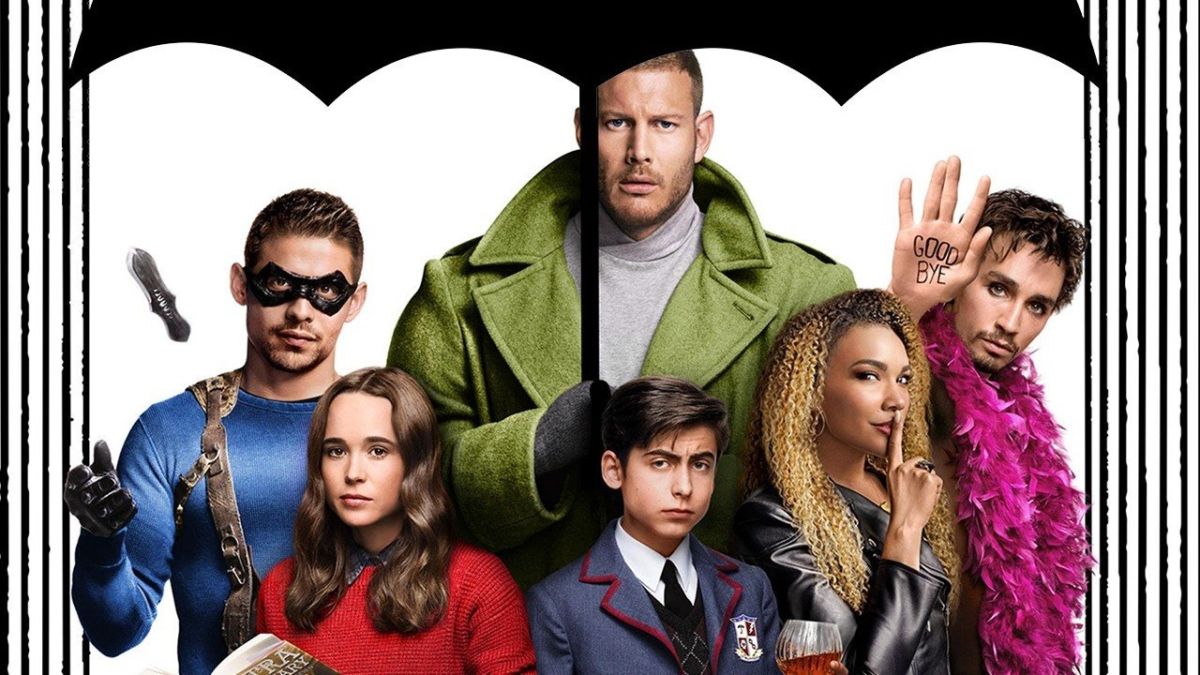 A show has a lot of promise when it has a certain combination of factors involved. In the case of The Umbrella Academy it’s based on a Dark Horse comic, produced by Netflix, and has a very impressive cast of actors. Comics and graphic novels usually transition very well to screen and this is partly due to the fact that they usually have a large focus on visual style. They also more often than not have a quirky, unusual, and downright strange tone to them. Most of my favourite comic book adaptations are pulpy, punchy, and visceral.

It takes a while to get used to The Umbrella Academy, mainly because it is completely and utterly barmy – but after a while it becomes very enjoyable. The premise is unique, the characters interesting and there is a good balance of drama and humour. It’s a very stylized show with violent, almost cartoony fight sequences, and a lot of the costumes and special effects are quite over the top and flamboyant. This can make it look a little cheesy at times, but it gets away with it more often than not as it reinforces the comic, superhero vibe the show is going for.

The editing is an important part of the show and for good reason. It feels more akin to its comic counterpart, with its flitting back and forth between characters, and the visual way it links them all together. This works particularly well in the first episode where we see each member of The Umbrella Academy introduced in a snappy, slick montage underscored by the seventh member of the group playing the violin. It makes for an exciting and entertaining opening and the fact that it is told out of order and misses out certain members of the academy, adds an element of mystery and surprise.

The editing, choreography and pacing in the first few episodes is very strong but there are a few instances where it falls a little short of the mark. It isn’t hugely obvious and is actually almost spot on. This is kind of frustrating in many ways, as you can see just how close it is to being flawless and streamline. However, the fact that the show tries and experiments with a plethora of different techniques and approaches demonstrates it’s potential and scope. It is much more rewarding seeing a programme take risks and try something different than play it safe and end up being boring.

One thing that a comic can never do is have a catchy soundtrack. This is where the adaptation can further enhance the snazzy visuals with some great song choices. As with the editing and choreography there are a few instances where a song, although fantastic, doesn’t quite marry up with the sequence on screen. Fortunately there are more cases where it does work, and this makes the scenes all the more thrilling to watch.

There is a great ensemble of actors portraying the various members of The Umbrella Academy. Ellen Page may seem like an odd choice at first, as she is usually cast in indie dramas, but it soon becomes evident that she fits her role as Vanya perfectly. Being the only member of the academy that doesn’t have a special power leaves her being oddly normal. The fact that she is kind of ordinary but still an outcast is a really interesting character design. Firstly it suits Ellen Page’s acting style to a tee, and secondly, it provides an interesting role reversal. Usually it’s the superhero character who is deemed the freak and misfit, but in this instance it’s the other way around.

Tom Hooper does a solid job as the serious, brooding, and loyal Luther but mixes things up by occasionally doing something very funny. However, it’s Robert Sheehan who really steals the show, and although his druggie crazed character of Klaus bears many similarities to previous roles he has played, he still shines bright in this programme. The way his character flips from being funny and zany to traumatized and mentally unstable is a jarring testament to his capabilities as an actor.

Aidan Gallagher is very entertaining in his role as Number Five and he plays an old soul in a young body very well. The scene where he is in the cafe in the second episode is particularly amusing and the way he interacts around and with people aged only thirteen makes for some brilliant dialogue exchanges and sequences. Diego and Allison aren’t as captivating as the other characters at the beginning but as the show develops their arcs and storylines grow far more substantial. Their performances are good but become much better when they are given better material to work with.

They’ve struck a good balance with The Umbrella Academy. Most of it is very comic book style with its stylized approach and focus on superheroes but there is a sprinkling of drama, that grounds it in a certain level of reality. Vanya represents the bridge between these two worlds and drifts between them throughout the season. Overall there is less drama than fantasy but the fact that it leans more towards comic book escapism than realism isn’t the worst thing in the world.

Unlike other superhero programmes and films, The Umbrella Academy isn’t an origin story. A short prologue provides a little background information on the academy’s power-possessing pupils, but we are introduced to the characters properly once they are all grown up. This is a technique that has become more and more popular in TV shows and for good reason: the characters feel instantly more real and authentic because it gives the impression that they have existed before the show starts. It also provides an established platform of conflict. For example, Luther and Diego have serious beef with each other, which makes for some tense and dramatic confrontations between the two.

Both these elements add a sense of mystery to the story and characters. We are presented with characters and a narrative which we don’t yet totally understand. Secrets, motivations and explanations are teased through flashbacks and dialogue sequences. Slowly the characters’ behaviour and lifestyle choices begin to make more sense as we are provided more pieces of the jigsaw puzzle. The relationships between certain characters become all the more investing when it is revealed how they formed those connections in the first place. This doesn’t solely apply to The Umbrella Academy but also supporting characters as well. The two assassins hired to take out Number Five are a brilliant addition and another entertaining and intriguing dynamic to the show.

The Umbrella Academy really hits its groove around episode four. Everything just feels much more polished and well executed as the show heads into its mid-season. The editing is snazzy and stylish, the story engaging and surprising, and the characters feel authentic and relatable. There are some big twists and surprises as the season unfolds and although there were one or two I guessed they were still brilliantly thought out and executed. The whole concept and central narrative is refreshingly original, and unlike most American TV shows where the use of time travel becomes ironically repetitive, The Umbrella Academy approaches it in a clever and unusual way.

The Umbrella Academy is one of the best superhero television shows out there, and that is high praise considering it’s up against the likes of Daredevil and Titans. It is truly an inspired work of art where each individual element is finely crafted and when brought together delivers something quite remarkable. The story is highly original with a suitable amount of twists and turns to keep the direction of the narrative unpredictable and surprising. The cinematography and editing combined with a fantastic soundtrack is glorious to behold. It is visceral, larger then life and visually inventive. The characters are investing and well developed with performances that bring to life the extremely well crafted script. It is a real mixture of styles but doesn’t ever feel like it steals too much from other influences. In fact the culmination of styles leaves it with something wholly unique and original. If I was being overly critical I would say that the first few episodes don’t have quite the same level of polish as the rest of the season but by episode four The Umbrella Academy will have you easily hooked and wanting more.