Though repetitive, The Sojourn is definitely a welcome walk in the park. 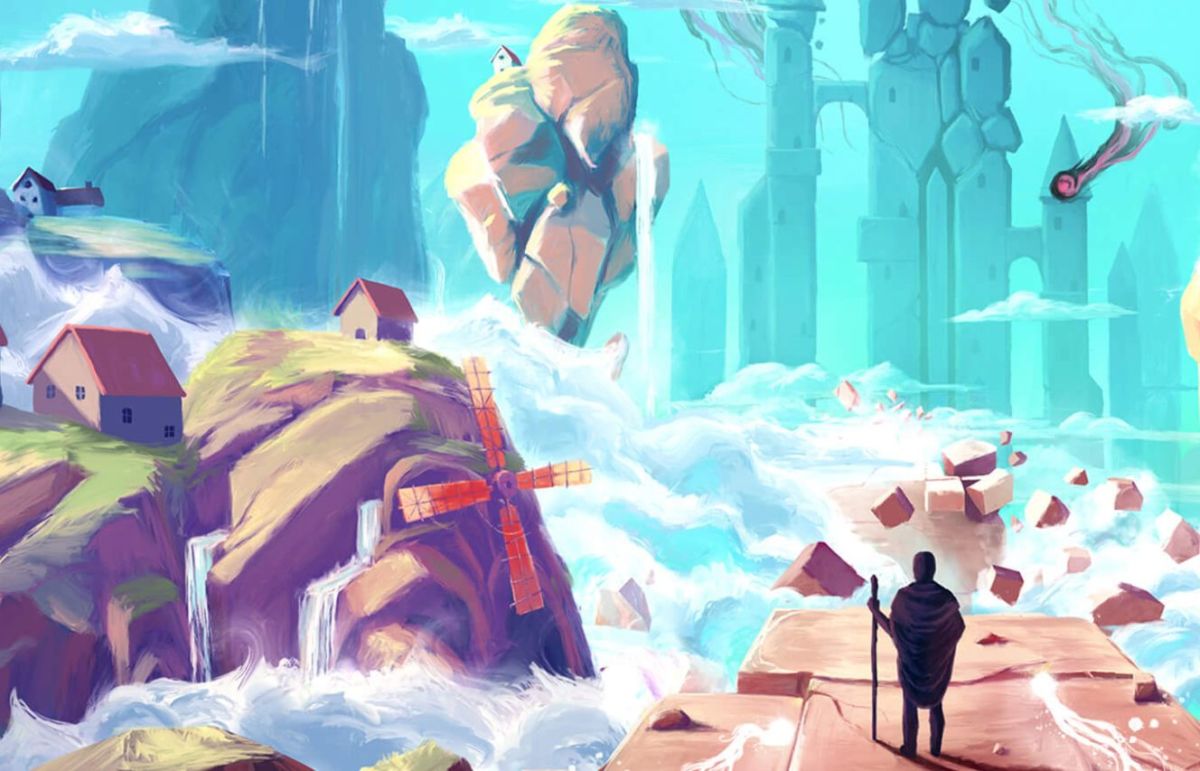 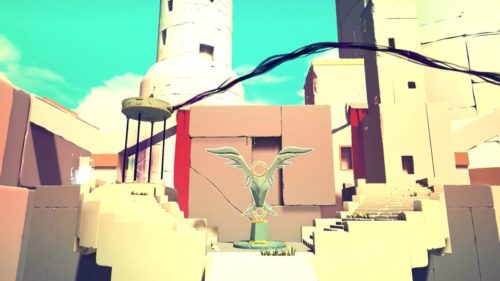 Let’s face it, puzzle games aren’t everyone’s cup of tea. In a market drenched in action titles demanding skill and quick decision-making, the methodical and slow pace of puzzlers presents a jarring contrast that makes playing through them a less forgiving experience. However, with the right combination of personality, challenge and perhaps most imperatively, reward, any game designed around solving increasingly difficult levels will prove to be worth the hair-ripping frustration they’re bound to bestow upon players.

In their newest project, developer Shifting Tides demonstrates not only an appreciation for this criminally undervalued genre, but a thoughtful understanding of the ingredients necessary for effective level design and first-person navigation. With an intriguing central mechanic that makes each puzzle in The Sojourn more unique than the last, the satisfaction of finally discovering an intricate solution will certainly have you hooked from the outset. The real challenge, and the game’s singular fatal flaw, is just finding the incentive to keep playing to the end. 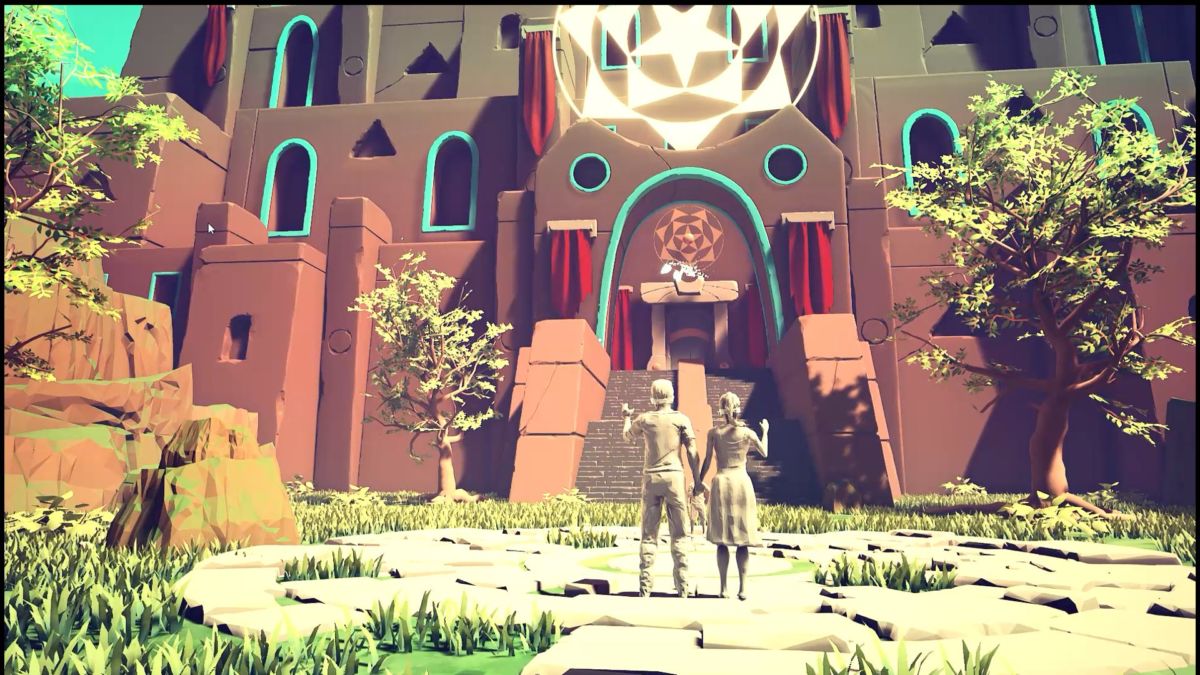 True to its name, The Sojourn has you temporarily residing in four vastly different areas, solving puzzles in subsequent order within chapters characterised by their unique landscapes. Guided by the mysterious orbs of light that are freed upon completing each level, your journey through a set path gradually unveils a mysterious story that is told not through dialogue or exposition, but through the statues of people that appear along the way.

Rich colours and sharp textures resonate within the vibrant geometric world, with each chapter being tonally distinct from the one before it. The boundaries within the areas of every puzzle may be small and limited, but an impressive view of the environment surrounding the platforms you walk on offer a well-needed depth that promotes a freeing sense of scope and space. 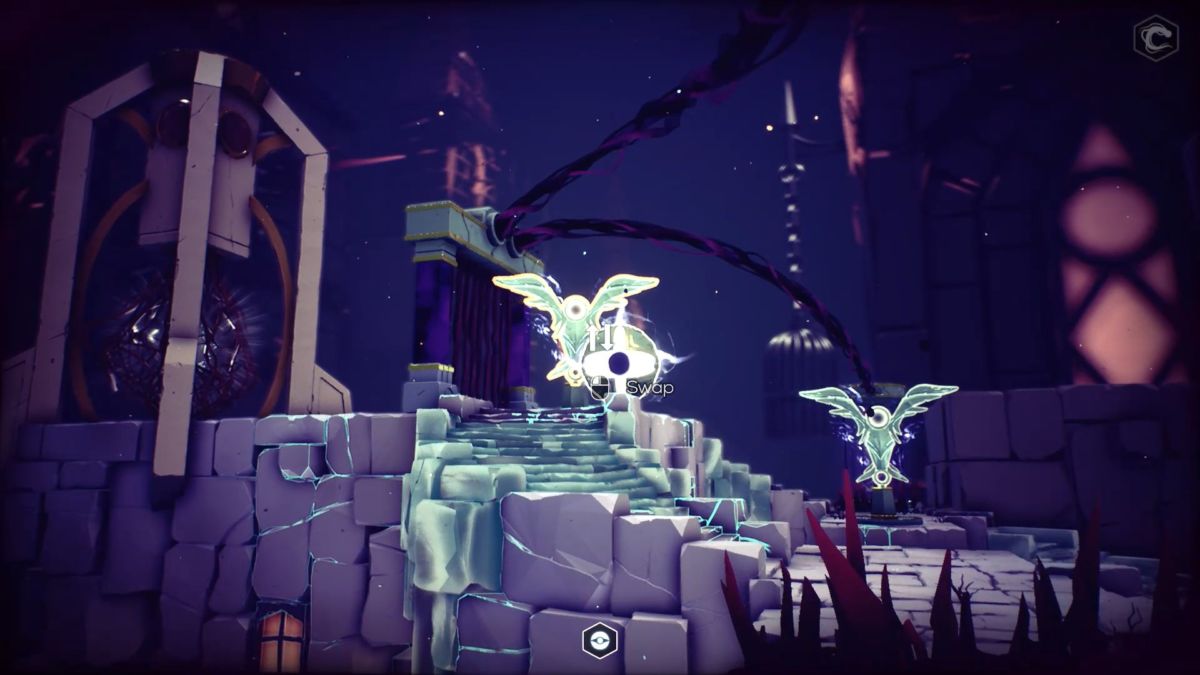 Complete immersion within the beautiful scene is only dampened by a clunky camera that, at its default sensitivity, tended to grate inconsistently across the screen. While visually jarring, the problem can be easily fixed by adjusting the camera settings, and doesn’t diminish the overall atmosphere established by an ambient score and gorgeous graphics.

While the harsh constraints of The Sojourn’s linear gameplay grants no backtracking, additional collectables or opportunities for exploration, there is a refreshing sense of freedom in being able to choose the order to complete a collection of challenges. Each ‘room’ typically contains four to six separate puzzles which are accessed by entering a door. Although they are labelled with a roman numeral that recommends an order of difficulty, it’s a welcome feature to be able to leave a puzzle that has you stumped and to come back to it once your esteem is restored from solving a different one. 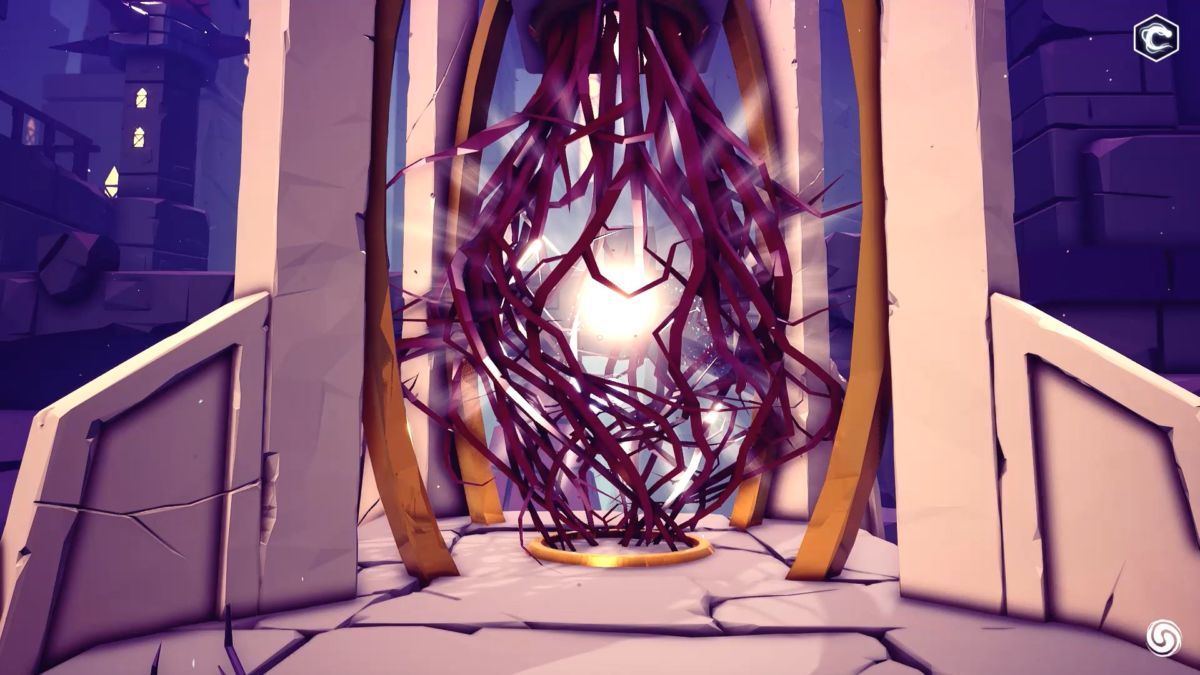 In regards to the puzzles themselves, their ingenuity truly makes this game stand out as one of the more memorable and innovative first-person puzzlers out there. Shifting Tides experiments with the notion of light and shadow, harnessing their contrast as a central puzzle-solving mechanic that has you shifting between the two realms in order to path your way forward. While we’re certainly used to seeing the ‘light and dark dichotomy’ gimmick in games of all genres, the inventive ways it is employed in The Sojourn makes solving the dozens of puzzles a welcome and satisfying challenge.

The function of the two realms can really be boiled down to the contraptions you must utilise in order to reach the end goal. While some will place you within the dark realm, such as stepping on platforms of flame or looking directly at floating mechanical eyes, others can only be activated while you are already within it. Through statues that allow you to teleport by swapping places with them, harps that construct bridges only within the time of their brief melody, and magnifiers that project the dark realm along a straight path, a trial-and-error method of uncovering new pathways will eventually lead you toward a solution that will have you feeling like a true Einstein in discovering. 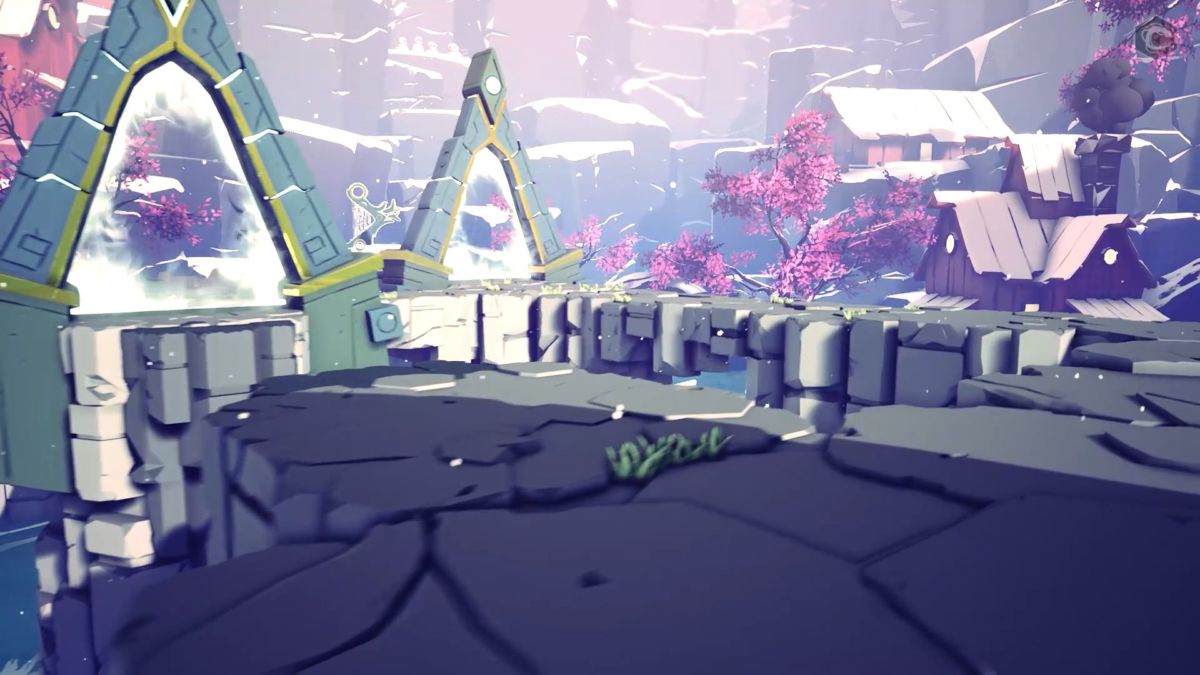 While a narrow first-person viewpoint makes the puzzles seem intimidating at first, almost every challenge is designed so thoughtfully that, with a little perseverance, the correct method is guaranteed to present itself eventually. However, this unforgiving puzzler does not go out of its way to provide guidance, offering little instruction beyond the basics and virtually no hints to get you back on your feet. While you will have to discover for yourself the numerous functions of each contraption essential to your puzzle-solving endeavours, understanding and exploiting their quirks in order to reveal unexpected solutions proves to be the most gratifying aspect of this game.

With that being said, The Sojourn inevitably suffers from repetition; the bane of many titles that feature puzzle-solving as its core gameplay. While its linearity portrays an enchantingly simple, albeit ambiguous narrative that unfolds gradually as you progress, not one of the puzzles actively reflect the story in their solving. The themes and characters may be removed completely and it will have no bearing on the outcome of completing levels. In fact, even the levels have no relationship or flow with other levels, with each puzzle unaffected by the solution of the one before it. As a result, playing through The Sojourn felt like more of a slog the further I progressed, with puzzle after puzzle suffering from their lack of variation. 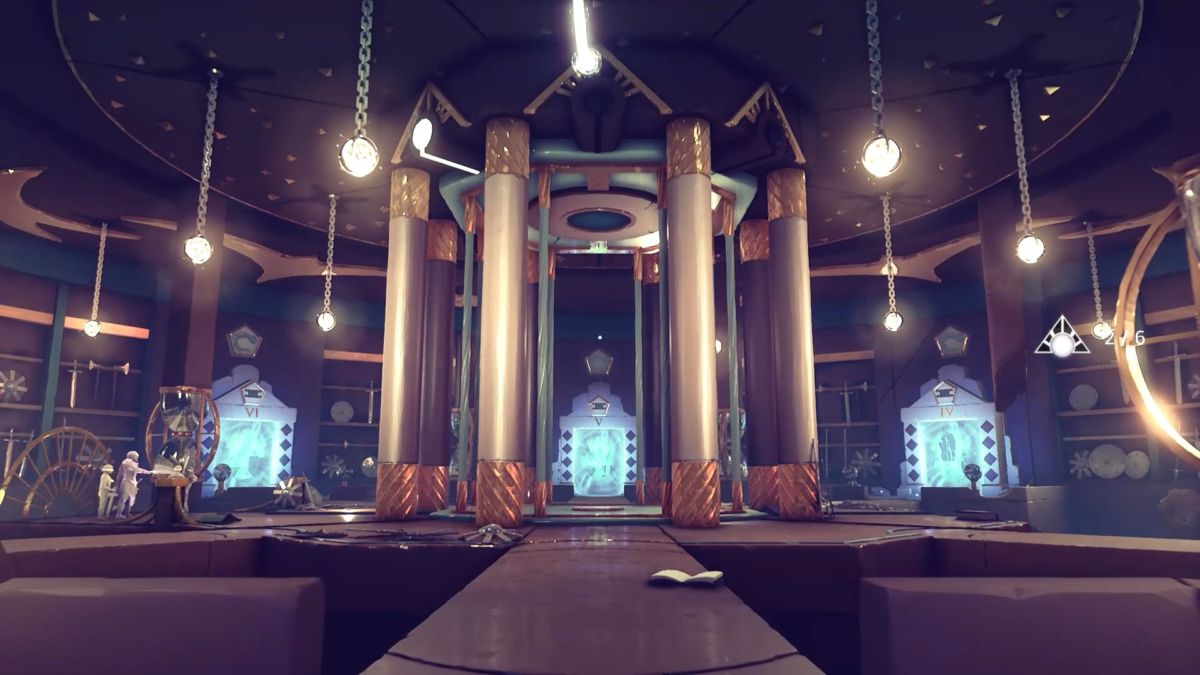 My receding attention to ‘bonus’ puzzles–new areas revealed upon reaching the final platform of a level–are a testament to how the gameplay elements within The Sojourn are simply not diverse enough to motivate me to fully complete every level. While they all provide a further challenge that, once solved, presents you with a ‘scroll’ that contains vague textual allusions to the broader plot, their purpose is undermined when you are given no opportunity to return to these optional puzzles later during your playthrough.

Aside from boasting about the number of ‘scrolls’ in your count at the top of the pause menu, there is no reward for spending an additional ten minutes agonising over a puzzle that is ultimately skippable. The absence of any meaningful payoff offers little incentive to collect them, which only becomes more palpable the more difficult they get. As a result, an unintentional emphasis of repetition over reward is likely to impair anyone’s dedication to fully completing The Sojourn, and sadly, I wouldn’t blame the non-completionists who decide to opt out of any puzzle that isn’t mandatory for progressing through the main story.

Despite its relative sameness, The Sojourn succeeds in what it ultimately sets out to do, offering complex puzzles within beautifully-crafted interactive spaces. With a vibrant art style and a beautiful, encompassing atmosphere, this puzzle game patiently caters to players who long to experiment with intuitive mechanics in order to discover creative solutions at their own pace. If you are prepared to enter its world with little expectation of a deep plot or hefty exploration, playing through The Sojourn is bound to be an immersive, charming and thought-provoking journey that will be a reward in and of itself.

Verdict
While repetition defines The Sojourn as more of an attractive collection of brain teasers than a rich narrative experience, its intricate levels and creative puzzle design will engage any player looking for gratifying challenges of a slower pace.
7
Buy on Humble