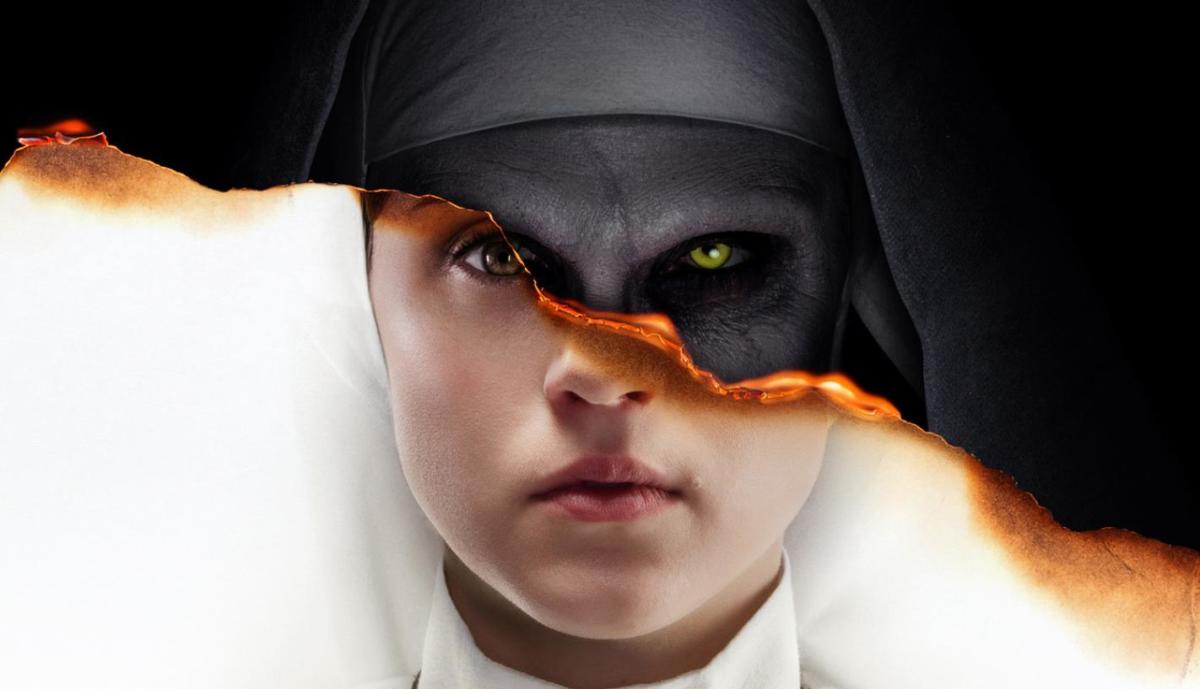 The first The Conjuring film was a breath of fresh air for the horror genre. Following the success of Insidious, director James Wan brought back the classic haunted house tale, and The Conjuring’s use of extreme moments of tension combined with likeable and relatable characters led to massive success. Both films would go on to spawn multiple sequels and spin-offs, and The Nun is the latest addition to the Conjuring franchise. The Nun herself was easily one of the more frightening aspects of the franchise, so an origin story was an obvious choice. While the film does provide a good amount of fun scares, there’s little beneath the surface.

The Nun is a prequel to the Conjuring universe, set in Romania during the 1950s. This shake up of time period and setting is a welcome change for the franchise, and the choice to have the entire film shot on location in Romania gives the audience some truly beautiful scenery to take in. It follows Father Burke (Demián Bichir, and it’s nice to see some positive latinx representation, unlike the other film released this weekend) and Sister Irene (Taissa Farmiga, younger sibling to The Conjuring’s Vera Farmiga) as they investigate the suicide of a young nun at a Romanian abbey and contend with the evil force that resides there.

Taking over for Wan is director Corin Hardy (The Hallow), who does his best to emulate the tension that Wan so effortlessly creates. It works for the most part; The Nun has plenty of drawn out scenes that cut the music and build suspense to the point where you’re just left waiting with bated breath for something to jump out and scare the life out of you. You always know that something is going to happen, you just don’t know when, or where it might come from.

Credit for the successful terror has to go to cinematographer Maxime Alexandre (The Hills Have Eyes, The Crazies, Annabelle: Creation), whose work features some wonderful overhead shots that are expertly staged (my favorite image is of Sister Irene, shrouded in white, surrounded by the other nuns, all cloaked in black). When the characters foolishly decide to go off by themselves to investigate shadows or noises, Alexandre switches to a handheld feel, getting us as close as we possibly can to the character’s point of view and line of sight. Unless, of course, there’s something lurking behind them that’s only meant for the audience to see. The suspense is nearly tangible, and the scares come quickly and mercilessly.

Bichir (Alien: Covenant, The Hateful Eight, Machete Kills) and Farmiga (American Horror Story) do a fine job conveying absolute terror, especially Farmiga, who puts her large Disney princess eyes to perfect use. However, their respective characters are extremely thin, receiving only vague backstories instead of actual personalities. The two simply aren’t very interesting, and this lack of interest for the characters in the story is the biggest problem with The Nun.

You cared about the people in The Conjuring, and that’s what made the film so engaging. You cared whether they lived or died, and you felt empathy when they suffered. You don’t get to know enough about Father Burke or Sister Irene, making it hard to care when they get terrorized. The only character with any sort of personality or charm is Frenchie (Jonas Bloquet), a random villager who discovers the body of the dead nun at the start of the film and sticks around to help out. Frenchie provides some necessary levity and light comedy relief, something that the film sorely needs once you get through the genuinely spooky second act.

After a slow start, the film immediately ramps up the scares, and the couple nights that the characters spend in the abbey are relentless. It’s scare after scare, and while it can get a little tedious, it manages to provide some variety in location and creepiness. By the third act, however, the atmosphere becomes a little dull; the characters seem to all but cease being afraid and you lose any sort of feeling that the heroes might not win.

The plotting throughout the film is a bit clunky, and the exposition is delivered rapidly and clumsily every time it needs to be told. It holds The Nun back from being something more than just an hour and a half of cheap thrills, which is what is sadly seems to become. If you’re interested in a horror movie with some real substance, this isn’t the one for you. If you simply enjoy being scared for the sake of it and not worrying about much else, The Nun can still be a lot of fun.