The Life of Space Brian: Unexpected Help in EVE Online

Becoming a star among the stars. 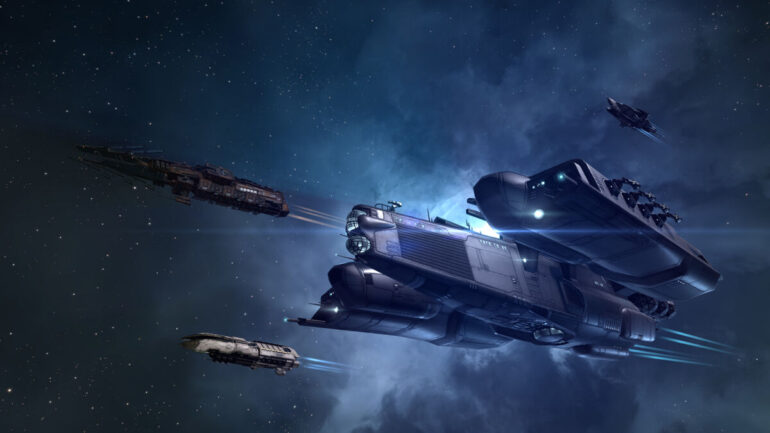 It’s been over a month since I first drifted out into the open space of EVE Online. My growth in the game is noticeable, though it feels like I’ve barely scratched the surface of how much there is to do. Still, progress is being made, and I found a niche that I enjoy, so perhaps that’s enough at this point.

This isn’t about just me, though, but more about some strange friends I made as I delved further into this storied space simulator.

It all started when I realized just how much time I’d need to dedicate so that I could give EVE a proper trial before passing judgment. It’s not a game you can simply hop in and understand everything at work, so it was going to take at least a couple days of playtime in order to grasp enough concepts that I would feel comfortable discussing the game at length.

With such a deep time sink, I decided that it may be worth streaming my experiences just in case someone out there was willing to help a “newbro” as I got lost in all the possibilities. At worst, I’d have footage for content later, but at least I left a door open to those looking to assist.

As it turned out, a lot of EVE viewers were looking to assist. I began streaming with a title like, “Total noob looks for what to do,” and that was enough to bring in a handful of veteran capsuleers offering advice and suggestions on what I should do.

I was floored. I was offering nothing but the worst gameplay and a starry-eyed sense of wonder, but the community apparently enjoyed seeing that enough to come in and help out. I began taking as much advantage out of this rare resource as I could. I asked questions, I frantically read every line of chat, I tried out everything suggested, and I started to figure things out faster than expected.

Suddenly, a career in exploration seemed like an easy place to start, as it made for good viewing, and the difficulty of learning the basics was overcome by the collective knowledge of my chat. I kitted out a cheap ship, known as the Herron, with the best in early-game exploration gear per the advice of my new friends, and I set on my way to finally seek out the limitless treasures of space.

Then my streaming plans went off the rails. I had hoped to have a few people hanging around my stream that enjoyed helping rookies, holding conversations with them while figuring out a complex video game. That was precisely how it worked for a couple hours early on, and I was enjoying the peace of it all, right up until I got raided.

EVE Online doesn’t have a massive viewer base. Right now on Twitch, it’s got a quaint viewership of just over 200 people. For comparison, the new indie single-player hit Loop Hero has double that, and even something like Diablo 2 has close to a thousand people watching currently. Yet somehow, those couple hundred viewers for EVE ended up getting dropped in my channel when I was raided by a popular streamer.

Chat exploded almost immediately, as did my anxiety with so many people watching me fail at a game that’s been out for over a decade. I knew this was a special moment in my playtime of EVE, but this also pulled me away from being an average beginner. Oddly, these people didn’t poke fun at my mistakes, but instead began encouraging and helping me do better.

You always hear about how vicious Twitch chat can be when streamers mess up, but these people were here for other reasons. This was my first experience with the generous community of EVE Online.

Instead of the regular toxicity or heckling, these people were in my chat for the sole purpose of making me better at this game. There was this sense that they genuinely wanted me to enjoy EVE and succeed on my missions into the void. I didn’t really know how to handle it, as that’s just never been my experience in video games.

It’s an odd feeling to see veterans care and work with rookies. I introduced my friend to League of Legends a couple years back, and he got verbally assaulted every match because he didn’t win his lane. These were his first games ever, but that wasn’t any reason for him to be bad, apparently.

I’ve always been a solid player in Call of Duty, but that doesn’t matter when your team loses. You could do your part and people will still bash you for any small flaw they see. I just accepted this as the regular toxicity of multiplayer games on the internet.

In EVE, when someone identifies a new player, they actively look for ways to help you enjoy the game just a bit more. For some reason, this is the game where the community understands just how important new players are for the life of an MMO, and it was so refreshing to feel accepted. I was no longer just a new player lost in the void. I was a rookie in the midst of veterans who could carry some of my burden as I improve and grow.

If nothing else, EVE restored just a bit of my faith in the gaming community. There are people out there that care about you playing their game, and they just want you to have fun like they do. Sometimes that gets lost in the static noise of the toxic players, but they do exist, and they actually understand what games were made for.

It’s notable that my experience as a rookie may have been drastically altered by the hosts I received while streaming, as I immediately knew a plethora of knowledge just from asking my chat. Generally, this information may be obtained through the rookie chat that’s open to all players, or perhaps you’d have to do some research to learn as much as I did.

After a time, they realized just how new I was, and I started receiving in-game donations. Here’s where my new player experience lost some credibility, as one viewer donated a full 300 million ISK to help me mess around in the game. I was a couple weeks into the game, thinking if I made a couple hundred grand from a transaction, I was rolling in profit. Most early ships only cost a couple million ISK, and I now had enough to buy a veritable fleet of them. Suddenly, my bank account had a couple zeroes added to the end, and I felt invincible.

Now, even though I was still learning, I had the money to play risky. I could buy ships, upgrade weaponry and play however I’d like, as loss wouldn’t even dent my pocketbook at this point. And that’s precisely what I did. I upgraded my materials and almost literally threw myself into a random point in the universe to try out real exploration.

Part of me loved this brand-new audience, but it also brought about some anxiety as it turned this game into a show as well as a playthrough. I wanted to be an entertaining sight for all the veterans while also getting my information and playing how I liked. However, I quickly learned that the stuff I really wanted to pursue wasn’t exactly tantalizing internet content.

Although exploration is a great time for new players, as it involves a lot of navigation and minigames, the money made is usually minimal in comparison to some other professions. In a good exploration run, I may spend a couple hours scouring the most dangerous areas of the universe and return with tens of millions in materials to sell on the market. However, if I were to use my new resources to start mining better materials, or perhaps reinvesting into some space freight, I’d make multiple times more money in a fraction of the time.

Mining and freight are perhaps the most boring jobs in all of EVE space, though, as you’re mostly just clicking to do one activity and idling that activity for the duration. Miners have combat, but weapons are a waste of slots, so you generally just carry drones to deal with it. Freighters may be attacked by pirates, but the only solution for that early on is avoiding the dangerous zones at the expense of a longer route.

With 100+ people watching my every action, how could I just sit there watching a mining vessel circle some rocks? I wanted to have that slice of viewership, but that demanded I play in a way that was entertaining but not necessarily profitable. Of course, I gave in and continued exploring.

This would prove to be a detriment to my long-term enjoyment of EVE Online. With such an abnormal beginning to this game, I never really found an in-game community, but I found viewership on Twitch. They were there to keep me company as I played alone, but perhaps playing alone wasn’t the right decision. My interest waned as I got burnt out from trying to entertain while chasing something I didn’t find all that exciting after a couple of runs.

It may not have been the end of my time with the game, but it was certainly hindering my ability to keep picking up EVE every night. I needed to find my own enjoyment within the game, but the viewers wanted their entertainment. Where could I go from here?

READ NEXT: INTERVIEW: CCP Games On How To Keep Players In The Space Race