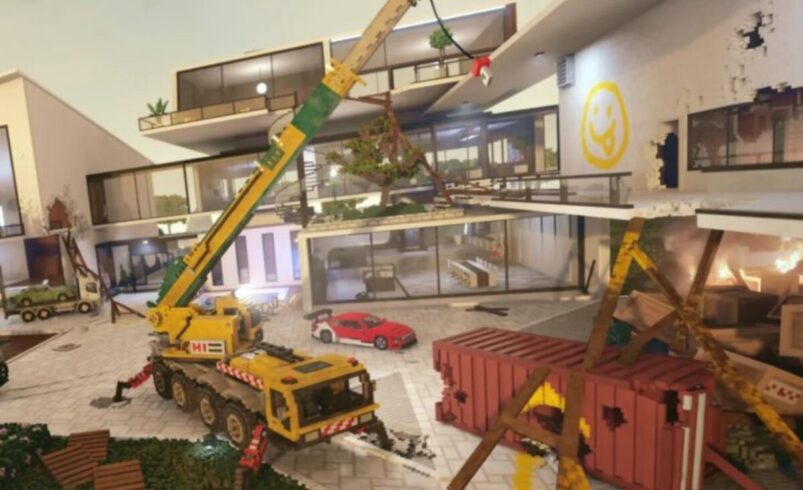 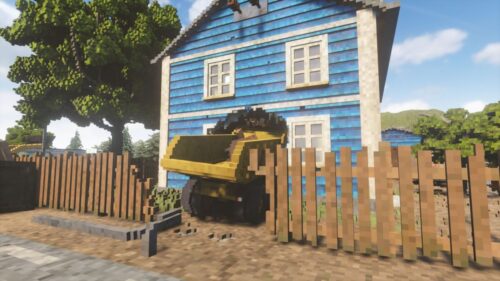 Teardown has taken the core concept I fawned over two years ago, when it was in Early Access, and delivered a complete and perfectly polished final product.

There’s a long history of games trying to create destructible environments – most of these ran directly into the stumbling block of only some items being destructible. You’d throw a grenade, and it would take out potted plants but leave buildings standing. It’s like in old cartoons, where stuff that’s actually going to move is animated differently. 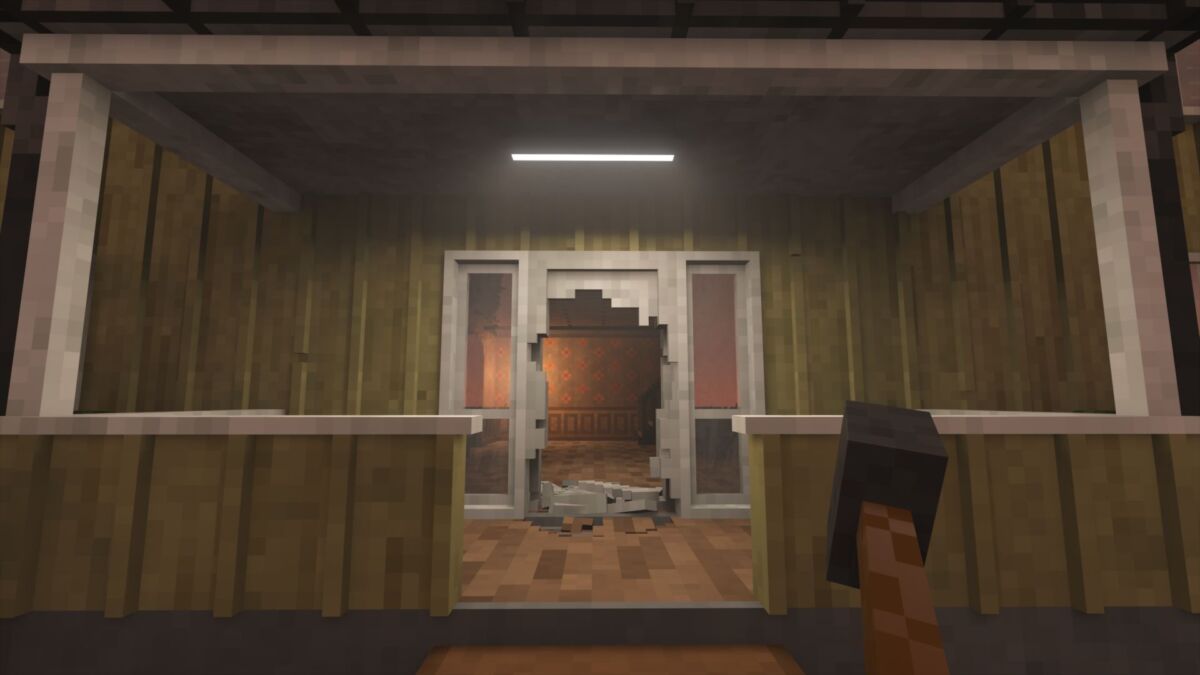 Teardown does have its equivalent of those background cells, the stuff that cannot be shifted or harmed no matter what you do. But to get to that bedrock layer, you’ll usually have to demolish a building and then tear up the dirt underneath. While it does not present a completely destructible world, this is in the same way as kitchen cleansers only kill 99.9% of bacteria. For all intents and purposes it’s got the job done.

And while it’s blocky and voxelly in a way fans of Minecraft will find familiar, it’s a great deal more finessed than Mojang’s world of metre-wide cubes. It’s only once you get up close you’ll start to see the seams – and then, things have a few more corners than they might do in real life, big deal. The levels here are recognisable as the real world rather than a weird pixel hell.

(The lighting effects and water graphics are also embarrassingly good, far better really than they need to be.) 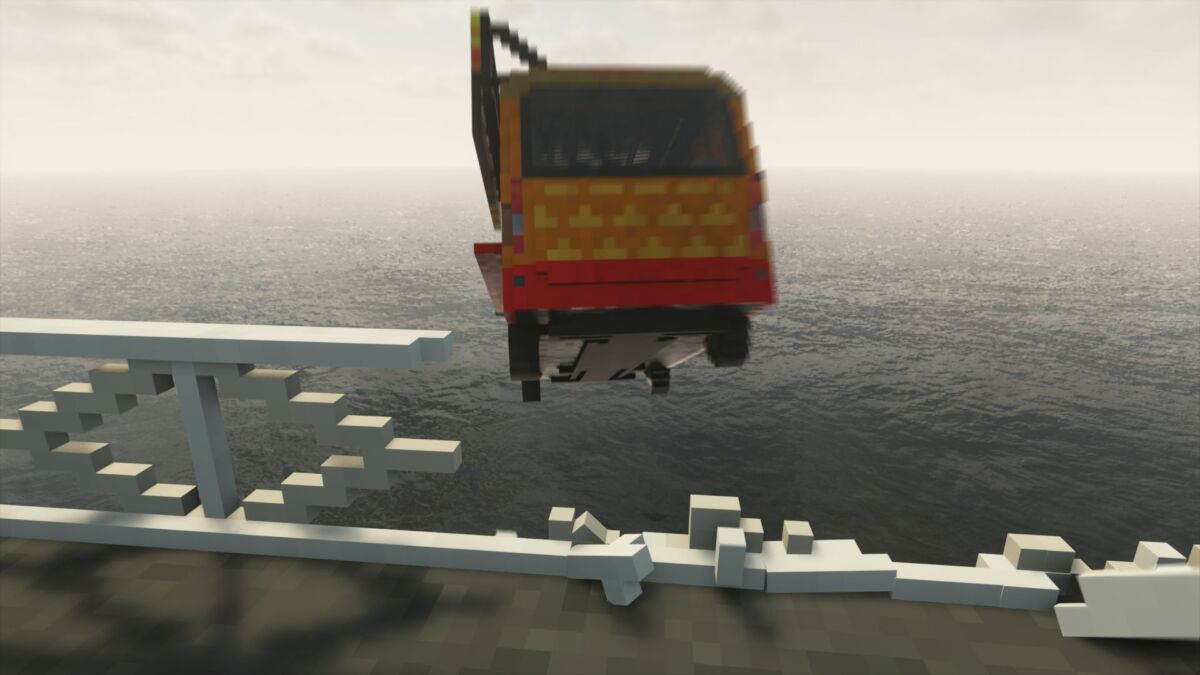 So when you take your sledgehammer to something, it’s not just some brightly coloured blob courtesy of Unity3D, it’s a merry quasi-realistic recreation of actually smashing stuff up. There’s a decent selection of playgrounds on offer, none huge as game worlds go, but surprisingly dense and replete with little collectibles.

The brilliance of Teardown is that, unlike Mojang’s golden goose, it doesn’t create this sandbox world and then layer a basically disconnected quest on top of it – the destructible environments are key to the missions. Does it take too long to run from A to B? Blow up the dividing wall and see how many seconds that shaves off.

Going through steadily more complicated heists, you’ll come to know the levels pretty much every way round. Usually this is a matter of ‘steal all the items within the time limit’ – but not always, with some pleasingly creative other goals here and there, prompting you to carve through each zone in a whole new way. 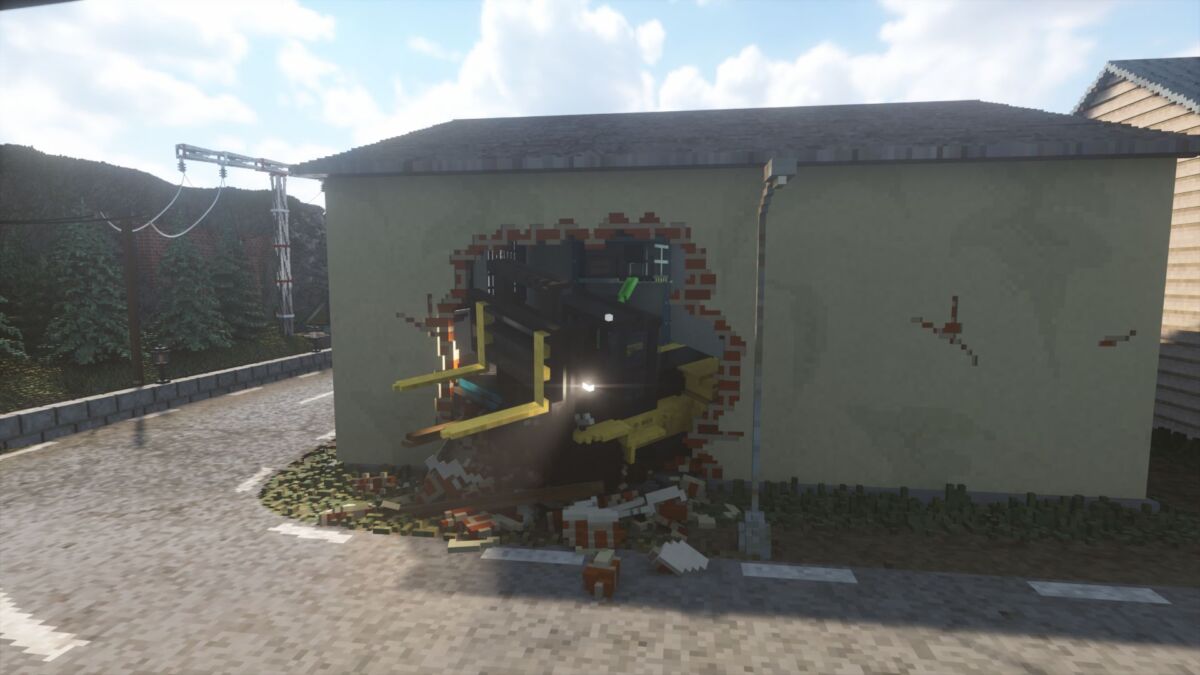 You’ll quickly get a sense what sorts of different materials the game world is made of, and what different tools you’ll need to deploy. Some things can just be smashed, some need to be blown up or have a truck driven through them, some need to be carefully cut free from their moorings – and very occasionally, they need to be stuck together. Planks and cables, the joining tools, are where you really start to be able to mess with physics objects.

When I was gushing over the Early Access version, I suggested the addition of a leafblower, to ‘quickly hoover away all those little shards of brickwork’, which I’m immensely pleased to say is now part of the player’s arsenal.  The leafblower tool manifests itself just as I’d speculated, a way to clear away debris quickly and conveniently (possibly so you can drive a sports car very fast through the hole you’ve just blown in a wall). 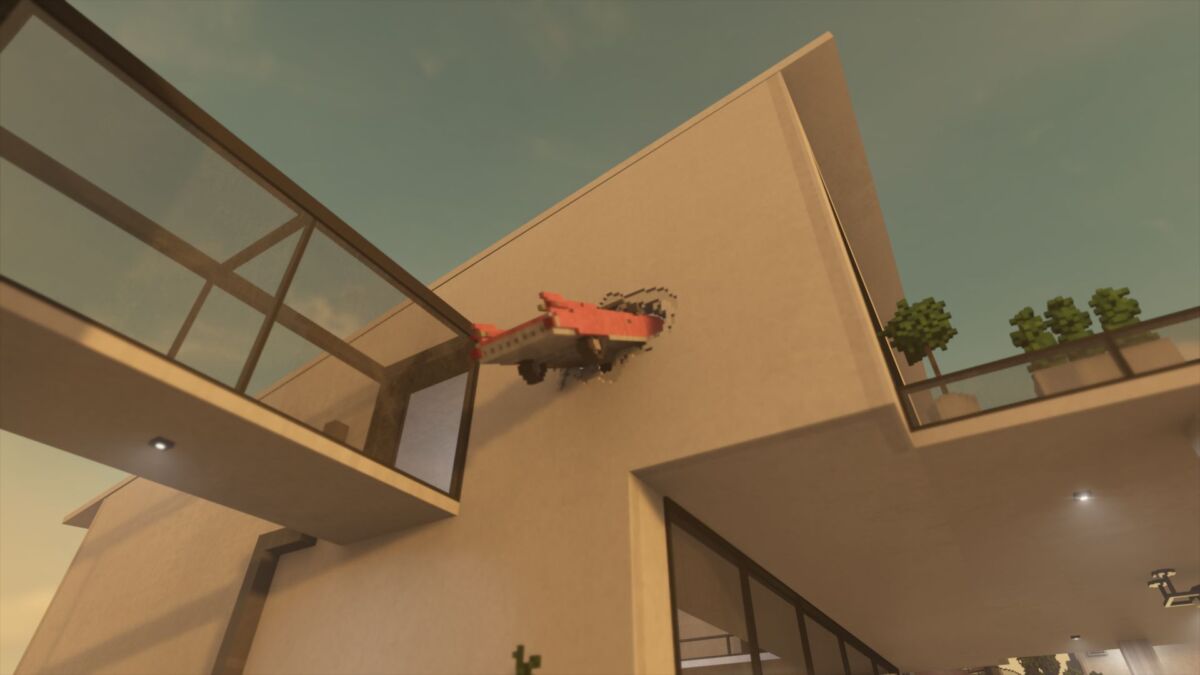 Another advancement since the Early Access period is the addition of enemy NPCs. The enemies aren’t too different from the attack helicopter that was already a feature of the game – and which play into the destruction/physics-based gameplay, rather than stopping it dead in favour of having to laboriously shoot them over and over and over.

This is hardly a complaint in a sandbox game, but still, Teardown does make you a little too effective. With no small modesty, I have to confess that I handily beat the whole campaign without upgrading my tools at all. The default health bar is balanced about right (though it’s incredibly forgiving when you fall from high places), but it’s in screwing with physics objects that you start to feel as if you’re cheating somehow.

Getting large, heavy safes up steep, pixellated inclines is a doddle once you know what you’re doing. Which would hardly be any sort of a complaint if the game didn’t treat shifting them as a big, beefy challenge, something you’d need a serious plan for, rather than something you can fumble through with no preparation whatsoever. 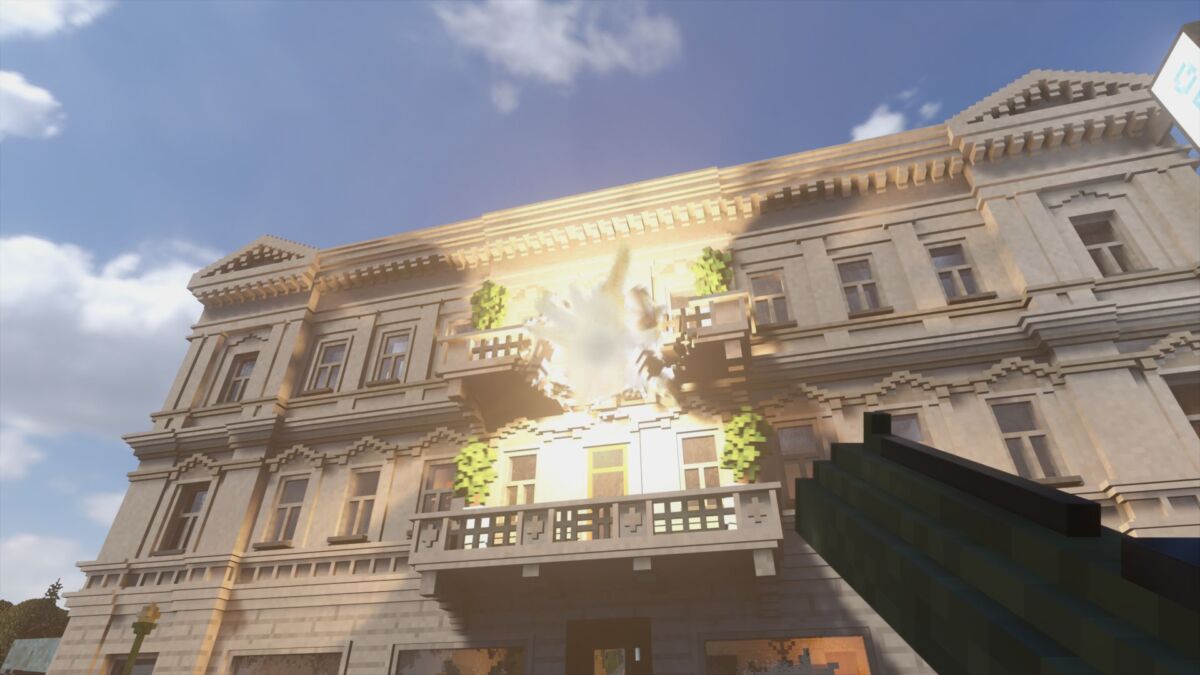 The enemies, too, aren’t really that much of challenge. They look pretty menacing, but it’s child’s play to stun them with an explosive and drop them in the sea. And while they will track you down if they catch sight of you, the player’s sheer manoeuvrability makes them something of a paper tiger – though, that said, if they catch you in a confined space they can really go to town.

And an odd development along the same lines is that the final version of game’s now instituted an adjustable difficulty – mainly in the form of changing the time limits that kick in when the alarms go off, previously a good round 60 seconds across the board. These could get tight, but that’s what demanded the player’s invention and creativity. If you choose to whack up the time limit as long as it’ll go, and then Sunday-drive your way between objectives, treating the game world as a fixed obstacle course rather than a sandbox, you’re only robbing yourself.

(Likewise if you choose to skip a level, which at this point is just the game patronising you slightly.) 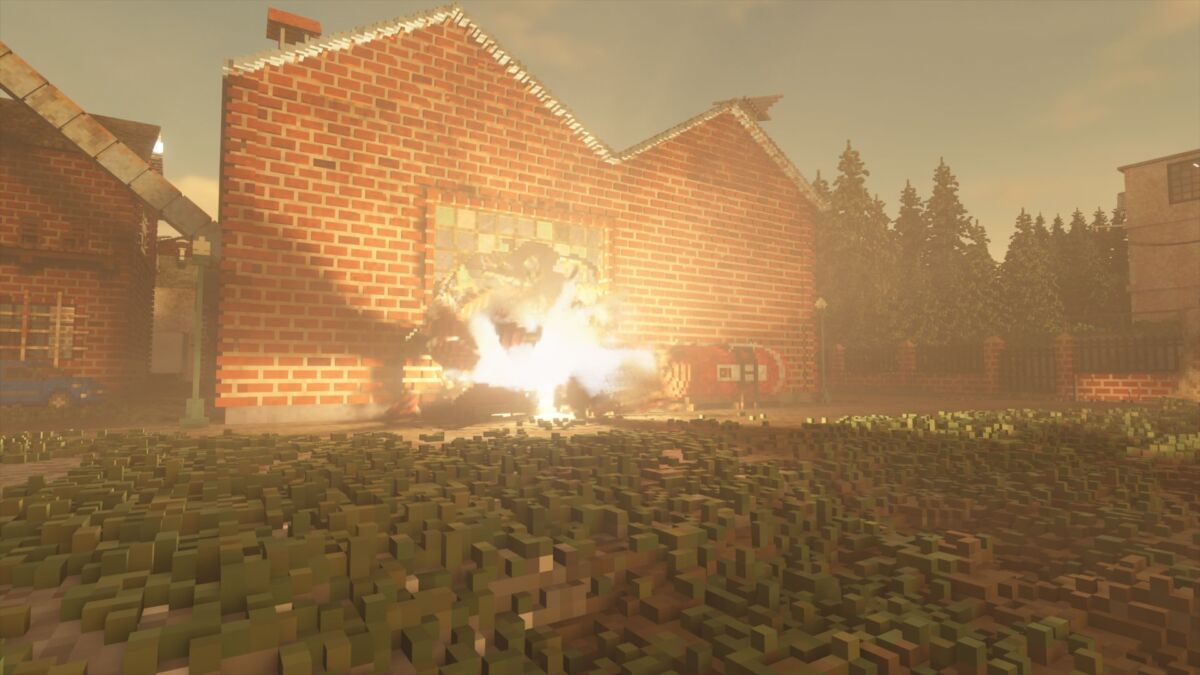 Whatever you may think about the difficulty, though, one thing Teardown has maintained is that irrepressible sense of fun, not least in the way it will occasionally just cry havoc and turn you loose with heavily armed military vehicles. There’s also a challenge mode where you simply destroy as much of the levels as you can, sensibly anticipating the fact that players absolutely would have done this anyway.

What plot there is can be safely ignored, being little more than a flimsy support structure for ‘go to (x) level and do (y)’. It’s quite amusing that the various clients of your teardown company are playing out their own private wars entirely via you and your sledgehammer, but the story as a whole never rises above adequacy. The thing is, though, it doesn’t need to. Does it matter why you’re breaking into a mansion and stealing artwork, compared to the visceral thrill of actually doing it? 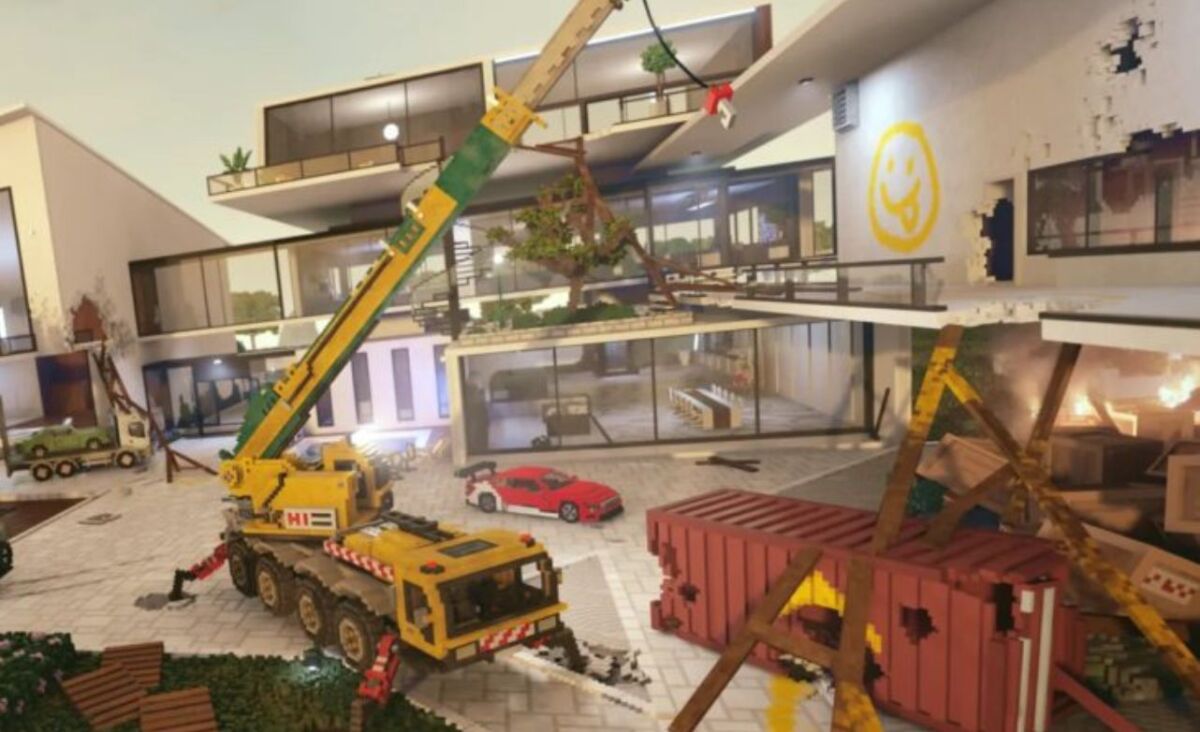 Verdict
Small but perfectly formed, if you get any joy at all out of smashing things to smithereens, there’s hours of fun to be had with Teardown.
9
Cultured Vultures is a pop culture website established in 2013 covering all things gaming, movies, and more. We eat your words.
All The News On The Biggest Games