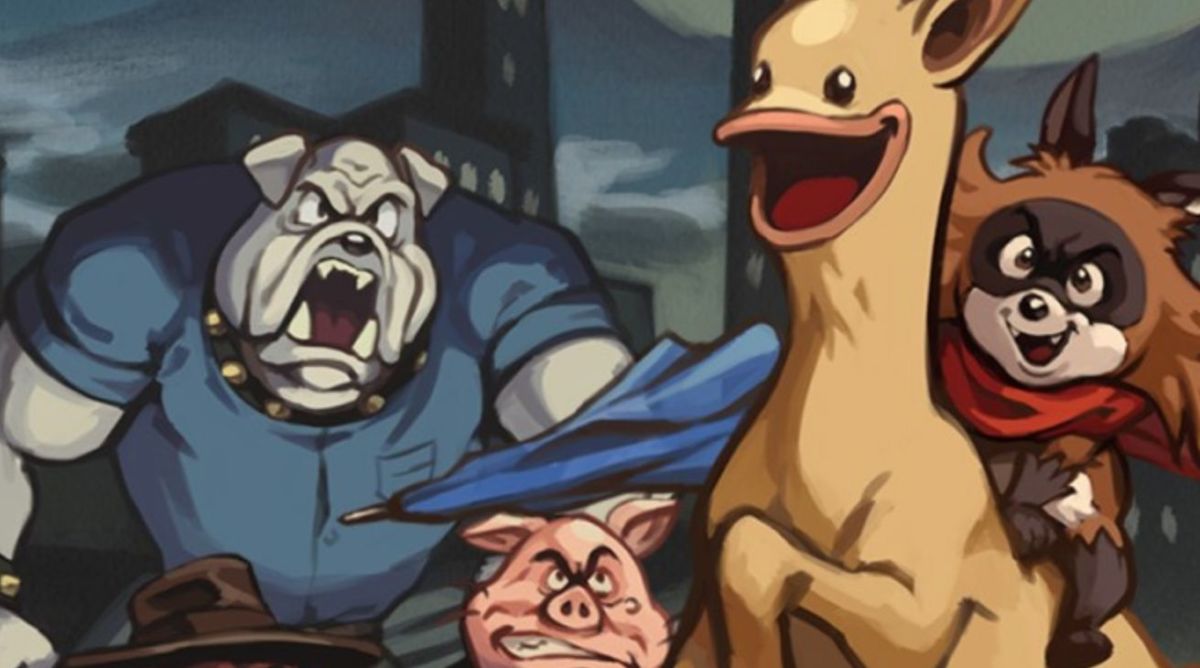 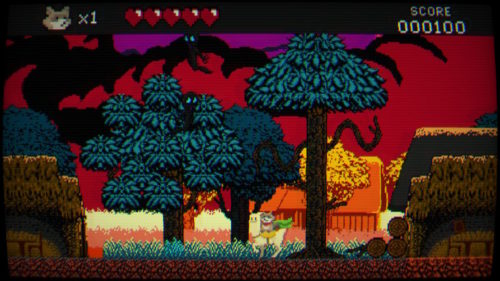 Are you sick and tired of microtransactions? Frustrated that extra juicy content is hidden behind paywalls even after parting with your hard earned cash? What then, dear reader, if I told you all your queries could be solved by a raccoon riding a llama?

Enter SuperEpic: The Entertainment War, a joyous throwback to a bygone era with enough fresh ideas of its own to make it one of the best indie titles in recent memory.

In the not so distant future, gaming has been completely monopolised by Regnantcorp, a single video game development company. By releasing their free to play games to control the masses, they have created an Orwellian dystopia of electronic addiction. It’s up to our heroes to take down Regnantcorp from the inside, as they navigate the strange and surreal castle-like office environment of the company, beating enemies, solving puzzles and bringing down the (quite literal) corporate pigs once and for all. 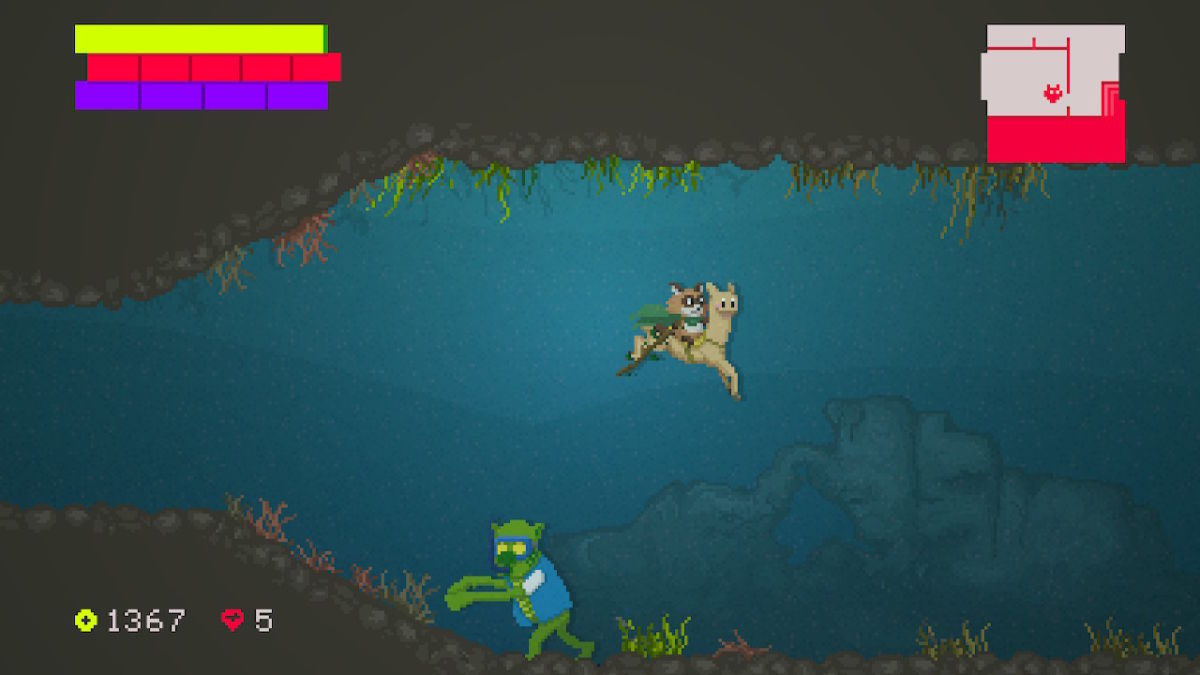 There are plenty of Metroidvania games out there right now, so for another entry into the market to really stand out, it needs an expansive and interesting environment to explore, plenty of secrets to uncover, and, of course, many an upgrade to keep you exploring for more. SuperEpic certainly has these in spades, but is by no means a carbon copy of the Super Metroid or Castlevania games it takes after. Plus, there’s enough to venture through here that will offer a good 10+ hours of gameplay.

As a raccoon riding a llama, the combat is fairly simple, in principle. You have three standard attacks: a regular slash, an uppercut that launches enemies, and a downward smash that knocks them down, with a weapon specific to each attack. The combat is made more entertaining through the increasingly powerful weapons you can upgrade to – you start with an umbrella, but, as the game progresses, you can purchase a tennis racket, a frying pan and even a swordfish. Although these are largely cosmetic, it’s still worth a giggle nonetheless.

There are a whole host of enemy types to be found, with the majority specific to certain areas of Regnantcorp, and all with a distinctive design. While button mashing will deal with most, tougher enemies that block attacks will require slightly different approaches. The further you progress, the tougher enemies will become. 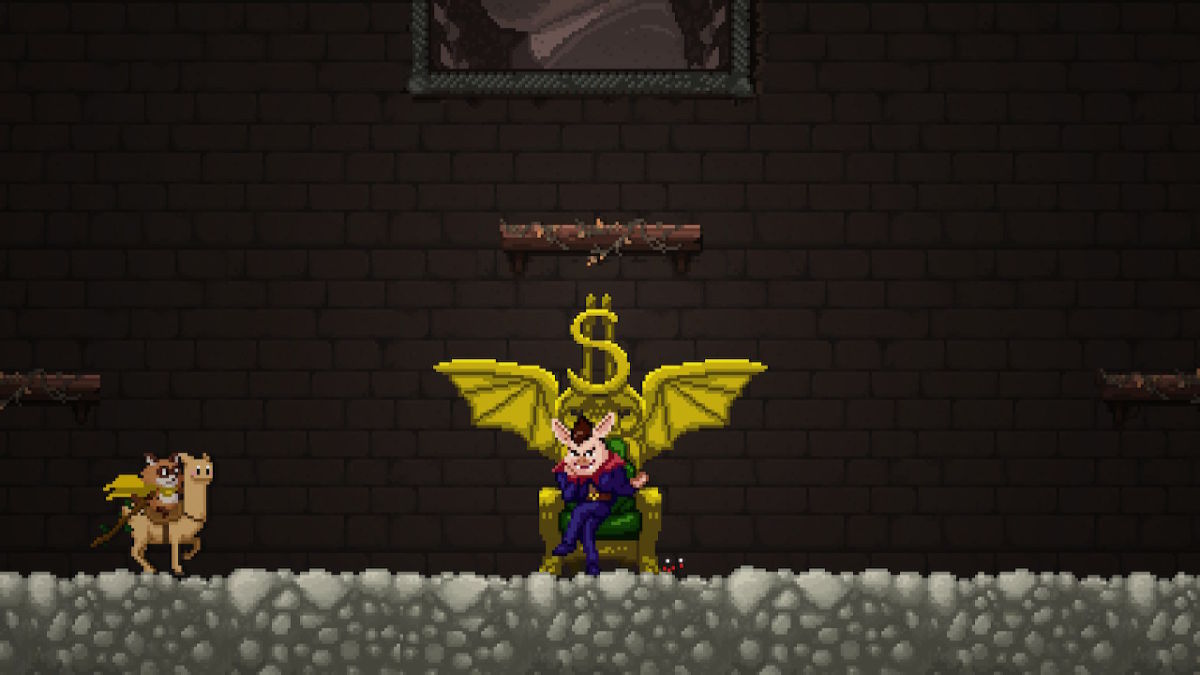 It was very satisfying that there was a consistency of enemy difficulty throughout the game, and nice that there was never a point after levelling up the game’s more powerful weapons where I ever felt too strong. Later areas do throw more baddies at you in one screen, and this was the only point in which I ever noticed tiny amounts of lag, but this was so minor that it never distracted from the overall experience.

The further you progress, the more attributes you will unlock. Your moveset is pretty basic to begin with, but you’ll soon acquire a stamina and rage bar, with additional skills to make use of these as you discover them. With the stamina bar, you can dash and glide through the air, as well as double jumping and super jumping. The rage meter is filled by using your attacks, as better and longer combos will fill it more.

This, in turn, will permit you to utilise special attacks, like throwing projectiles, or even your llama pulling off its very own Hadouken technique. You can only purchase these special attacks with gems though, warranting further exploration into SuperEpic’s every single nook and cranny. 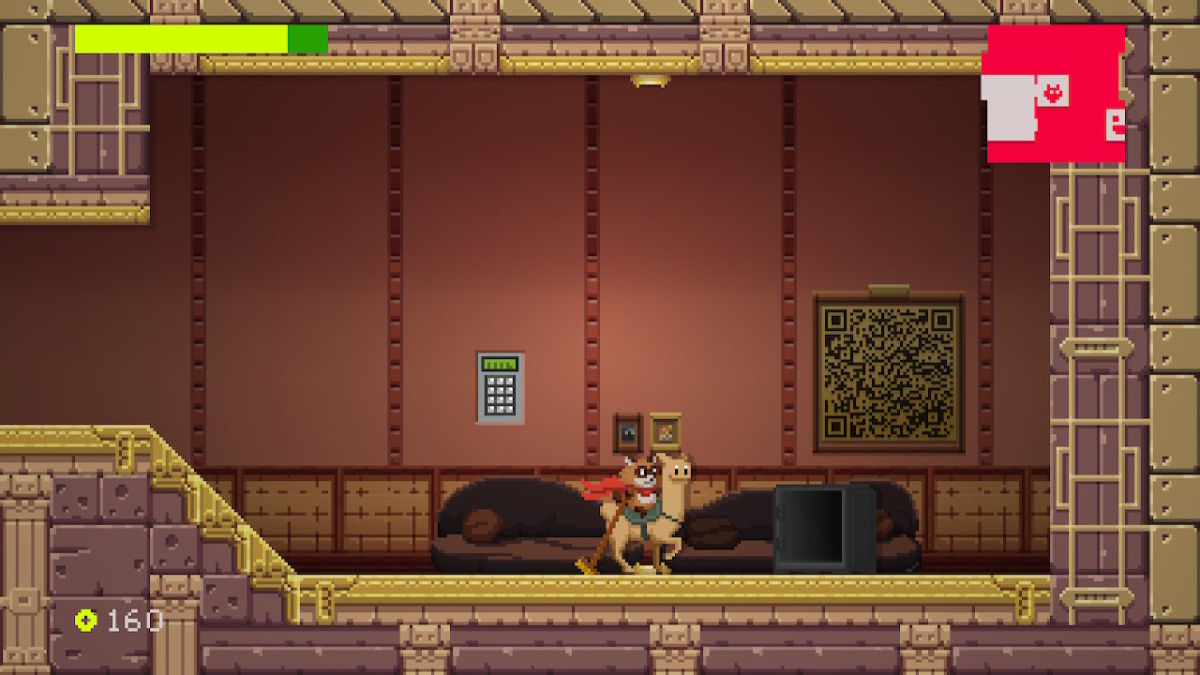 Combat is mostly encouraged in SuperEpic, as defeating an enemy will cause them to drop coins. Naturally, coins allow you to purchase upgrades for weapons, health/stamina/rage bar increases and better items for defense, along with other bits and pieces like energy drinks and bombs.

You will also come across different equippable trinkets which offer certain advantages, although you can only wear two in total (one for the raccoon and one for the llama). The trinkets usefulness will depend on your playstyle, but offer increases to weapon speed, the amount of coins collected from an enemy, or perks of varying ‘chance’, like 2 in 10 chance to counter an attack. These items are found in safes which are hidden all across the map.

It’s to be expected, then, that back-tracking is a massive feature here. The map of SuperEpic is a huge, open-ended, non-linear affair, ranging from futuristic, Mega Man-like areas to spookier Castlevania-esque outdoor settings and dungeons. The level design is certainly impressive, and every new room feels like a unique new challenge, making exploration even more exciting. New skills will naturally mean that more areas become accessible, but one of the most intriguing features of SuperEpic as a whole is its integration of multimedia.

Some rooms will have areas cordoned off by a laser wall, and the only way to deactivate it is by scanning a QR code with your mobile phone. While this isn’t necessarily a groundbreaking feature and has been seen in other Metrodvania style games, like Guacamelee, it’s put to much better use here. 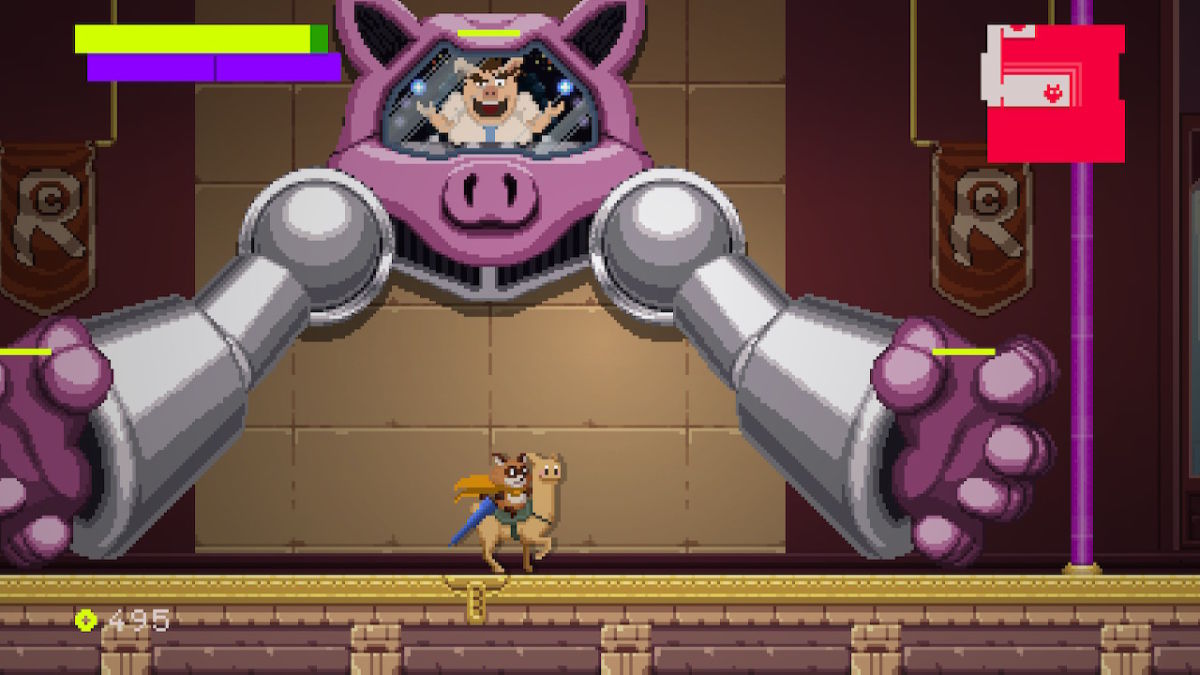 Scanning the QR codes will open up a link to a minigame, similar to the likes of Frogger or Angry Birds, for example. These are all fairly short, but beating them will give you a code to use in-game to unlock the extra portion of the room. They aren’t really tied to progression, though,more a way to unlock bonus items. It’s a fun gimmick to help SuperEpic stand out, although these did seem to drop off towards the later stages of the game, which was slightly disappointing.

The only downside to the exploration is something common to similar titles – the more of the map you open up, the harder it will become to keep track of where you’ve been or may need to return to. The in-game map only offers a few indicators, such as toilet save points, fast travel elevators and vendors.

There was a side mission I happened upon where an NPC tasked me with finding 3 bug reports, which I eventually did. However, by this stage later in my game, I have uncovered so much of the Regnantcorp map that I just couldn’t remember when or where I found this person in the first place. The lack of objective trackers can really kill your momentum.

This is the case with other potential side missions and areas of intrigue. SuperEpic never outright tells you it is a side mission. More so, you’re just kind of just left to assume it is and hopefully remember it hours later. I’m almost certain I’ve stumbled across a handful of these vague ‘is it/isn’t it’ quests and, even now, I remain none the wiser.

A lot clearer, though, are the boss battles. These are a real highlight of the SuperEpic experience, with each offering its own challenge and no two bosses feeling the same. Some will have you fighting mechs, and one particularly memorable encounter transports you to a loving recreated 16-bit dimension. Plus, all of the bosses are satirically designed and based on a different member of a game development team – all appropriately sinister in their pig form (four legs good, two legs bad and all that).

SuperEpic: The Entertainment War is a service to the Metroidvania genre, as it offers enough creativity and satirical humour to really stand out from the crowd. There are one of two niggles along the way, but nothing that will pull you out of the experience. It looks great, plays smoothly and is quite frankly tremendous and addictive fun from start to finish.