Super Skelemania (PS4) REVIEW – We Have A Bone To Pick

Its “single-sitting” promise comes at the cost of originality or fun. 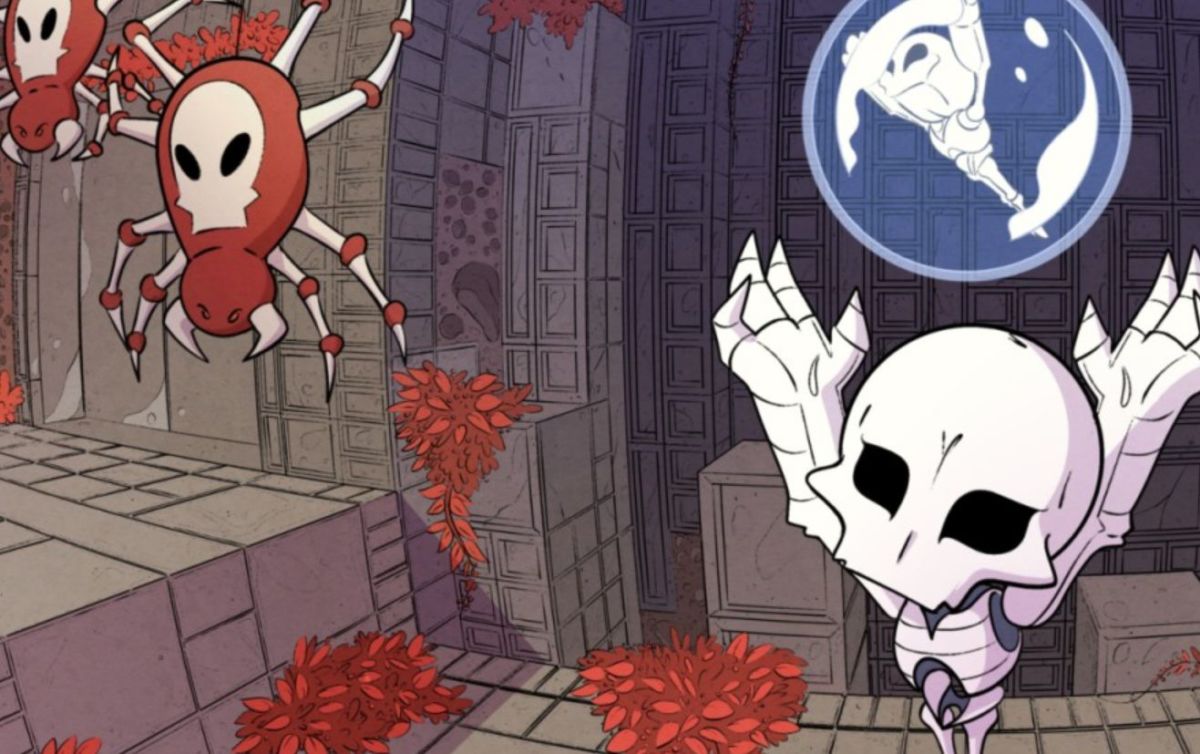 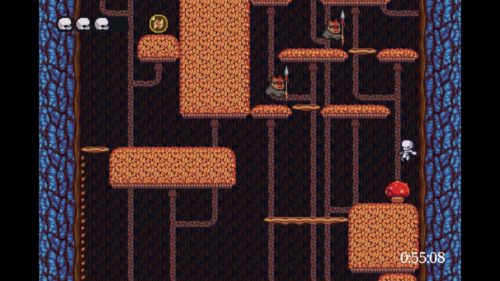 From the outset, Super Skelemania wears its mission statement as a “single-sitting Metroidvania” on its sleeve. It is up front about not being a game that players should expect to sink their teeth into, given its emphasis on speed, and herein lies its biggest problem.

Originally released on PC in 2017 by developer Ben Allen, the PlayStation 4 and Nintendo Switch port continues its emphasis on completing it as quickly as possible. You play a nameless skeleton who lands on a mysterious planet in search of gongs scattered throughout an underground cavern. You wouldn’t know any of this from the outset, as there is no in-game narrative or mission briefing to speak of. 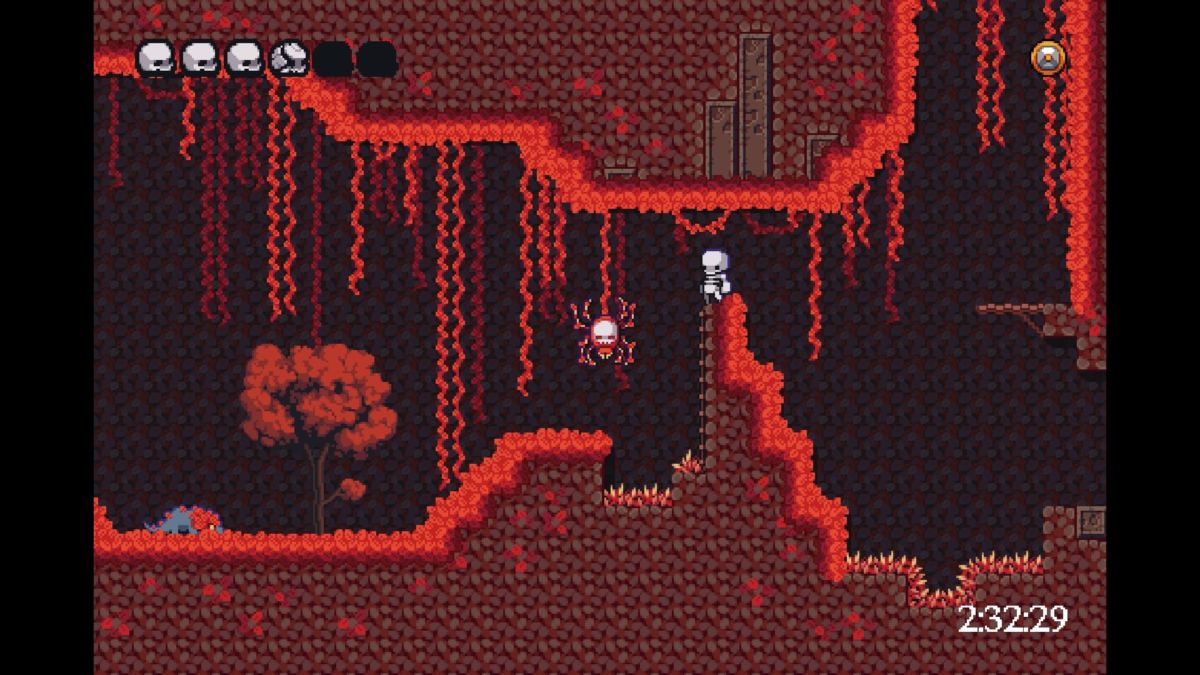 The player’s vague objective is only learned through discovering environments and noticing the recurring pattern of their layout. Every section of an environment is home to collectible maps showing points of interest, health upgrades, as well as the aforementioned gongs. In standard Metroidvania fashion, the player’s progress through environments is initially impeded by barriers that can only be passed once a specific ability is acquired. Abilities such as a double jump, air glide, body slam, and head-roll are all discoverable abilities that allow the player to proceed through environments.

While abilities such as skull roll, which allows the player to pass through tight spaces similar to the ball roll in Metroid, have been skeletonized, they are largely standard fare for the genre. There’s little original gameplay built around being a skeleton, which could have provided personality amongst varied gameplay experiences. There’s also the issue that the employment of these abilities is lacking. Due to its short length, the game doesn’t offer ample opportunities to utilize them. While functionally they operate as advertised, the limited number of chances to use them makes them feel unremarkable. 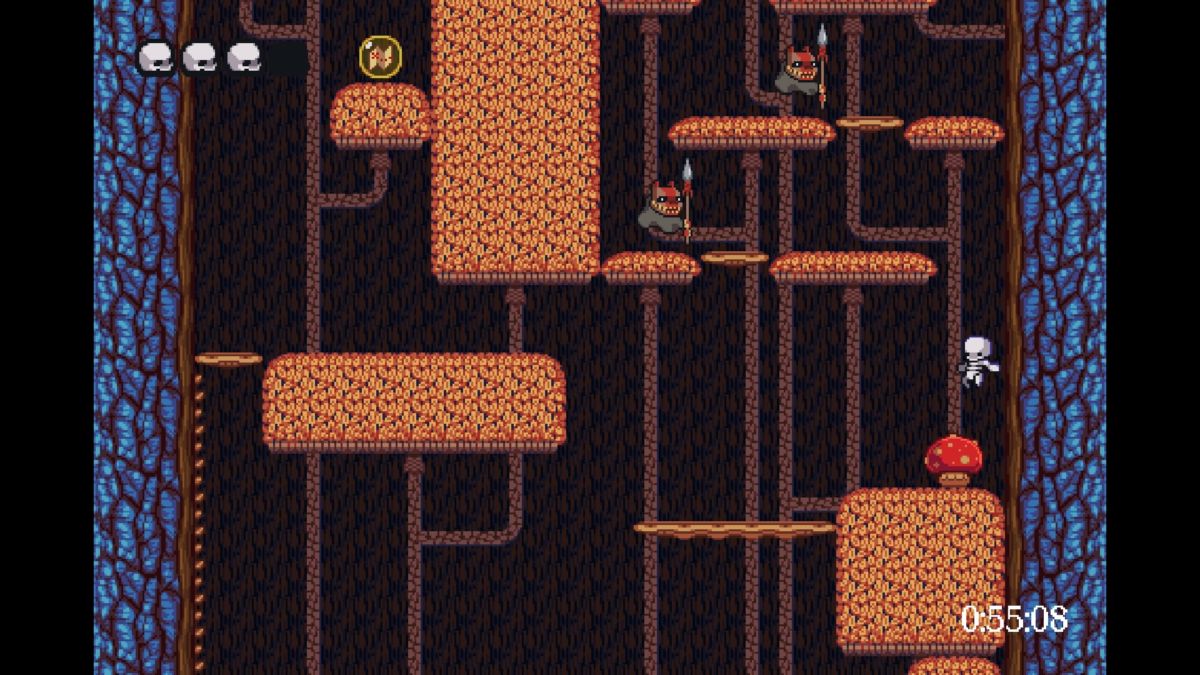 Abilities not only aid environmental traversal, but can also be used to combat enemies. Combat is relatively straightforward, as the player has a skull bash as their default means for fighting enemies. The skull bash has a limited range which is initially annoying, but never becomes a major problem given the enemy’s stagnant attack patterns. Enemies within the cavern are a reflection of the specific environment they reside in. Enormous spiders and feral wolves roam the “red vines” environment, while rock-spewing moles and bats defend the mining-themed area. While environments are relatively simplistic and uninspired, these slight aesthetic differences do enough to differentiate one from the other.

While I never became too lost in Super Skelemania’s world, I did wish that there was a way to track my progress. As each environment has a gong that needs to be rung, it became challenging to remember which areas I had already cleared. I only learned how many gongs I was required to ring once I discovered a shrine deep within the cavern that gave me this info. By that point, I had rung four of the five gongs and was unsure which area I had missed. This resulted in a lengthy backtrack which would have been avoided had I had a progress indicator. 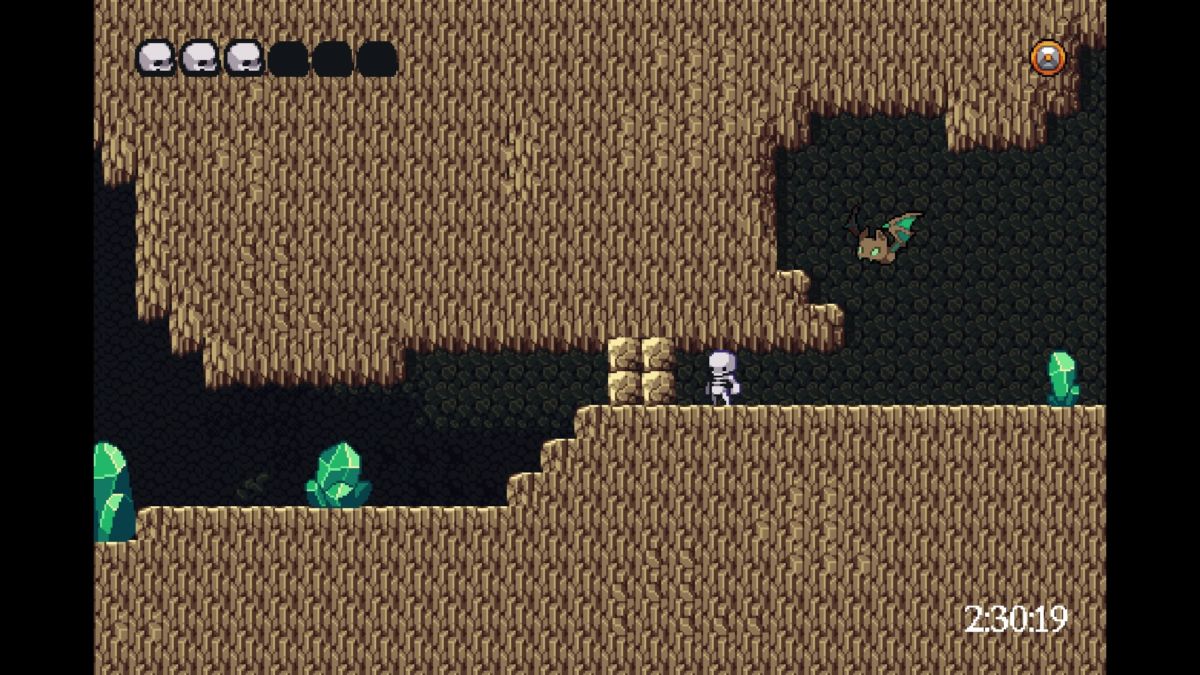 Given the game’s emphasis on single-sitting or speedrunning, I suppose these are not variables that would be important to those seeking it out for these sole reasons. But this raises my chief complaint: in that there’s no real reason to play Super Skelemania unless you’re interested in its speedrunning component. Again, if the player is looking for a game built for speedrunning, this fits the bill as it is meticulously designed to be traversed in no time at all. I finished it in an hour and a half, but I was taking time to search for everything it had to offer. To my dismay, there wasn’t much. I suppose if you wanted a game solely for speedrunning, this would be it, but for anyone else, there’s little reason to pick this up.

There are no elements of Super Skelemania which are bad in the traditional sense. It runs fine, it prescribes to its genre’s standard mechanics, and I encountered zero bugs. Its sole purpose for existing is to cater to a niche minority of gamers, excluding countless others who may consider checking it out. In terms of a Metroidvania, it does nothing inventive nor provides any unique variations on the genre, revealing its superfluous nature. A quick experience doesn’t constitute quality, and that is abundantly clear in Super Skelemania.

Verdict
A speedrunner’s delight masked as a Metroidvania that does little to differentiate itself from the titans of its genre.
5