New kid on the block. 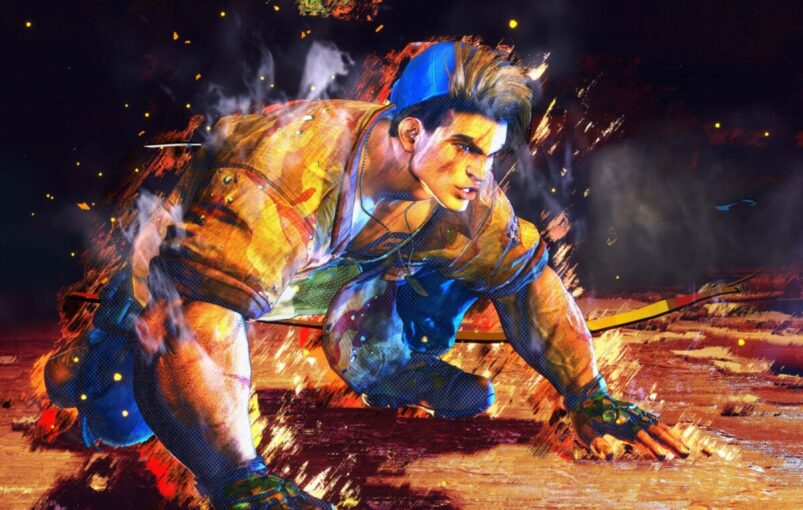 As much as Ryu was and still is the poster child for the Street Fighter series, Capcom likes to throw some new leading characters into the mix every now and then. Street Fighter 3 saw grappler Alex step up to the plate, and now with Street Fighter 6, it’s the turn of the MMA-influenced Luke to take centre stage. If you’re looking to pick up a new character, Luke is a great pick.

Here’s everything you need to know about Luke’s movelist in Street Fighter 6, including his Special Moves, Overdrives (EX Moves), Unique Moves, Super Arts and Critical Arts.

Luke’s projectile attack of choice, his Sand Blast attack sees Luke launch a shockwave of pressure from his fists right at his opponent. Depending on the strength of the punch button you’ve pressed, the Sand Blast will cover more of the screen, and given how fast the move is, it’s a great zoning tool, as well as extending combos. However, using it as a crutch will leave you vulnerable to smarter, more experienced players. Sand Blast has an Overdrive version, launched by pressing two punch buttons, which deals more damage and knocks the opponent down.

If you want a primer on how the Drive system works, Luke is the best character to pick up immediately, as he has a lot of moves that convert Drive gauge into additional damage. For instance, you can spend an additional Drive gauge on Fatal Shot during an Overdrive Sand Blast. Overdrive moves in general cost two drive gauges, so Fatal Shot is an expensive move to use considering you only have six gauges total, but it’s brilliant at getting the advantage if your opponent is launching projectiles at you. At least Drive gauges refill over time.

A versatile move, Flash Knuckle is a chargeable punch that changes depending on the punch button that’s been pressed. Light punch launches a short uppercut, medium punch launches a charging straight and heavy attack is a full overhand swing that causes a hard knockdown. Holding down the button can increase the attack’s power, though there’s a timing to the move in order to get the most out of it. When you see a flash, let go and you’ll boost the attack’s properties. There’s also an Overdrive version of the move, launched by pressing two punch buttons, which results in a two hit uppercut that deals decent damage.

A wrestler’s favourite move, the DDT is a high damage throw move that can only be activated during the first hit of Overdrive Flash Knuckle. Like Fatal Shot, it costs an extra Drive gauge in order to perform the DDT, but the damage results are absolutely worth the cost. Just make sure you perform the move on a hit only, as you can’t perform a DDT on a blocked hit.

(quarter circle back + punch during a vertical or forward jump)

Aerial Flash Knuckle is Luke’s way of manoeuvring around opponents while in the air, but the fact he can perform it during a vertical and forward jump gives him a lot of options. Like the grounded Flash Knuckle, the aerial version can be charged. Pressing the button will lead to a straight punch, while holding the button down for about half a second leads to an uppercut that’ll launch the opponent skywards. There’s also an Overdrive version of this move, which allows you to launch the uppercut immediately instead of charging it.

Avenger is a forward charging stance move that allows Luke to perform two unique attacks. Pressing any punch leads to No Chaser, a powerful tackle that can close the distance on an opponent pretty quickly. Meanwhile, pressing any kick performs Impaler, an overhead attack designed to punish those who are crouching. You can perform an Overdrive version of Avenger by pressing two kick attacks, and doing so changes the properties of the subsequent attack. No Chaser hits harder, while Impaler has less recovery frames.

Luke’s equivalent of Ryu and Ken’s Shoryuken, the Rising Uppercut performs much in the same way as the iconic duo’s timeless move. Different strength punch buttons will yield different Rising Uppercut, while the Overdrive version of this move is a double hitting attack that does a decent amount of damage. It’s a great combo ender, but it also works magnificently as an anti-air option, as it’s completely immune to all jumping attacks.

What separates Luke’s Rising Uppercut from the Shoryukens is the Slam Dunk move, which sees Luke punching his opponent straight into the ground. Like his other Overdrive follow-up moves, Slam Dunk is expensive on the Drive gauge, but the high damage and the advantage it gives you over the opponent to set up mix-ups means it’s an expense well worth taking.

An overhead attack, Rawhide can be used to punish crouching players. If you condition your opponent into thinking you’re going to hit a low attack every time they get up off the ground, chuck out a Rawhide and you’ll keep them guessing.

Suppressor is a strong body blow that’s unleashed after a quick back step. While the backstep is probably too short to avoid some attacks, the real value in Suppressor comes from its ability to cancel into Special Moves and Super Arts.

It’s no secret that the Shoryuken motion can be quite tricky to pull off for new players, so Outlaw Kick is a decent middle ground in the meantime. The kick itself is a powerful high kick with anti-air capabilities. It’s not as effective as Luke’s Rising Uppercut, but it can get the job done.

A quick jab, straight, hook combo that you’d find in boxing, Triple Impact can be cancelled into Special Moves and Super Arts, making it a solid combo to use if you’re looking to convert into a Super Art.

A two hit combo, Nose Breaker sees Luke kick his opponent in the leg first before going for a rising headbutt on his opponent. As mix ups go, this can be a great one to catch your opponent unaware before following up with a massive headbutt.

A series of punches that sees Luke working the body and face of his opponent. As a combo on its own, it’s decent enough, but the first two hits of the combo can also be cancelled into a Super Arts attack, making for a very high damage combo.

A projectile super art, Vulcan Blast sees Luke firing multiple high speed Sand Blasts at his opponents. Because it’s a strong volley of projectile attacks, Vulcan Blast is perfect for cutting through an opponent who’s relying on long range projectile spam. It’s also great for combos, particularly juggle combos, as the speed of the projectiles makes it reliable at picking up enemies you’ve launched on the way back down.

A powerful, combo ending Super Art, Eraser sees Luke channelling all of his power into some massive punches, before finishing off with a huge blow that knocks the enemy flying. The downside of Eraser is that the move only triggers if the first blow connects, and its range isn’t exactly stellar. It’s a good Super Art, just make sure to use it carefully.

Almost as if to make up for the range of the Eraser Super Art, Pale Rider sees Luke charging across the screen, mounting his opponent and laying in the ground and pound. The move does massive damage, and the distance that Luke travels in order to hit the move gives it plenty of utility. As a combo ender, Pale Rider is unparalleled, and the Critical Art version, which is available when under 25% health, deals even more damage.