With an animated show starring some plucky teens in the works, no wonder the franchise wants to add an old veteran to the mix. 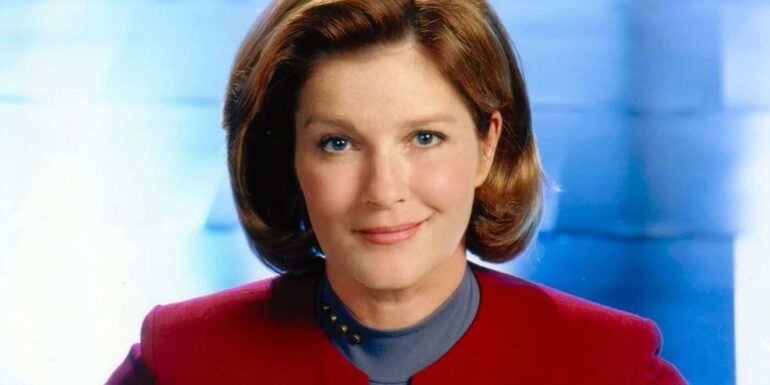 The recent Star Trek Universe New York Comic-Con virtual panel saw the surprise announcement that Kate Mulgrew, who led the cast of Star Trek: Voyager as Captain Janeway, will be returning to the role in Nickelodeon and CBS Studios’ upcoming CG animation Star Trek: Prodigy, which is to air on Nickelodeon sometime next year.

Mulgrew was happy to share the news, saying “I have invested every scintilla of my being in Captain Janeway, and I can’t wait to endow her with nuance that I never did before in Star Trek: Prodigy. How thrilling to be able to introduce to these young minds an idea that has elevated the world for decades. To be at the helm again is going to be deeply gratifying in a new way for me.”

President of Nickelodeon Animation Ramsey Naito joined in the praise, saying “Kate’s portrayal of Captain Janeway is truly iconic, and has resonated with a global audience for many years. We can’t wait to see her bring this character to life in a whole new way, while continuing to be an inspiration for both new and loyal fans.”

Executive producer Alex Kurtzman added “Captain Janeway was held to a different standard than her predecessors. She was asked to embody an inhuman level of perfection in order to be accepted as ‘good enough’ by the doubters, but showed them all what it means to be truly outstanding. We can think of no better captain to inspire the next generation of dreamers on Nickelodeon, than she”, somewhat blushingly dancing around the way general audiences did and still do react to women in positions of power.

How does this fit into the wider Star Trek world?

Developed by Kevin and Dan Hageman, perhaps best known for their story work on The Lego Movie, Star Trek: Prodigy follows a group of plucky kids who get their hands on a junked Starfleet ship and joyride it round the universe in search of adventure.

Star Trek: Prodigy represents another entry in the eternally-growing franchise, now owned by ViacomCBS, alongside CBS All Access’ Star Trek: Discovery, Star Trek: Picard, the animated series Star Trek: Lower Decks, the upcoming Star Trek: Strange New Worlds and an as-yet untitled project based on the CIA-esque Section 31 with Michelle Yeoh. The recurring irony, as with revisiting Picard and making Discovery a prequel, is that in reaching to attach Mulgrew’s name, a franchise which is fundamentally about looking forward to the future is yet again mining its own past glories.

Voyager is traditionally considered a minor misstep for the franchise, a stepping stone between the dark-horse classic of Deep Space Nine and the confused mess of Enterprise. Part of this, as we saw Kurtzman alluding to above, was the negative reaction to having Mulgrew in the captain’s seat – however, it would be insincere to say that this was the only criticism people had of a show which had people becoming lizards, frequently forgot its own backstory of the ship being stranded far from civilisation, and cast Ethan Phillips as a giant, irritating cuddly toy who saw nothing wrong with dating an alien child.