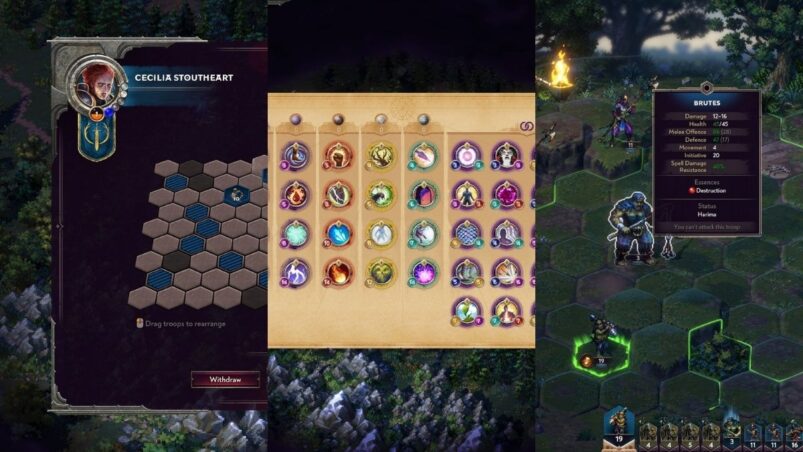 Along with adventuring, exploring the map, and gathering loot in Songs of Conquest, players will often engage in combat against both neutral treasure guards and other hostile wielders. Combat is a multi-faceted affair that could mean losing an entire campaign, getting a powerful artifact, or even prevailing over a critical opponent. It’s best to be ready to engage in this important element of adventure strategy.

Here’s everything you should know about combat in Songs of Conquest.

When two armies meet, be it an adventurer and a stationary neutral army or two hostile adventurers, players will be greeted with a deployment screen. Here you can see a basic layout of the battlefield, the position of friendly and hostile forces, as well as a rundown of what troop types you will face. In addition, you’ll have the ability to move your own troop stacks to available deployment positions to better take advantage of the terrain.

From this screen, players can decide whether to shift to the tactical mode and take manual control of their forces or auto-resolve by selecting the quick battle option. It’s highly advised, when possible, and if the forces are relatively equal in strength, to fight battles manually as the quick battle can be quite punishing to your army.

The units the wielder brings to battle will be the primary tool you use to achieve victory in the tactical mode. The units in the character’s army will be split into stacks that act independently.

All unit stacks will either be melee-focused or ranged focused, with the former requiring to be adjacent to attack a target, whereas the latter can offend targets from several tiles away. However, melee units exert zones of control to hexes adjacent to them, meaning if enemy units try to move through said zone of control, the melee unit will get a free attack of opportunity.

All units will have passive abilities that can help define a unit’s role, such as shielded footmen of the Arleon faction gaining a passive damage reduction from all ranged attacks. In addition, units may even have active abilities that can provide additional effects, be it personal stat buffs, placing destructible terrain, or even negatively affecting enemy units. Using an active ability will automatically end the unit’s turn, so positioning and timing are critical here.

A unit’s initiative stat will determine its placement on the turn tracker with higher initiative units acting first. The offense and defense stats determine how much damage a unit will either deal or mitigate, respectively.

Terrain will have a major impact on tactical battles. Terrain can be split into indestructible and destructible features. Indestructible terrain includes hills, walls, and other features integrated into the landscape.

Destructible terrain includes elements such as barrels, sharpened stakes, and other obstacles that block movement, but that can be removed with an attack from a unit.

Aside from blocking or affecting movement, the terrain with the most impact are elements of elevated tiles. These increase the range of ranged units, while melee units gain an offensive and defensive stat bonus if their target is on a lower level of elevation.

The world of Songs of Conquest is infused with magic, affecting not only the land but also conflict and battle. On top of their direct damage-dealing uses, units also generate mana, or Essence, that can be used to cast spells.

Each unit has an Essence type associated with it that each stack generates at the end of their turn. The more stacks in battle, the more Essence you’ll generate.

This Essence is then stored in a pool that can be used to cast spells. In effect, your own army composition affects the types of spells you may cast, so keep that in mind when recruiting units and preparing for battle. Spells available for casting will appear on the Quickbar in the top left corner of the screen under the wielder’s portrait.

Combat is where players will put their skills of character management and tactical army command to the test. This is where your strategic planning and efficient adventuring come to a head. How will you approach combat?

READ NEXT: 10 Most Underrated Strategy Games Of All Time