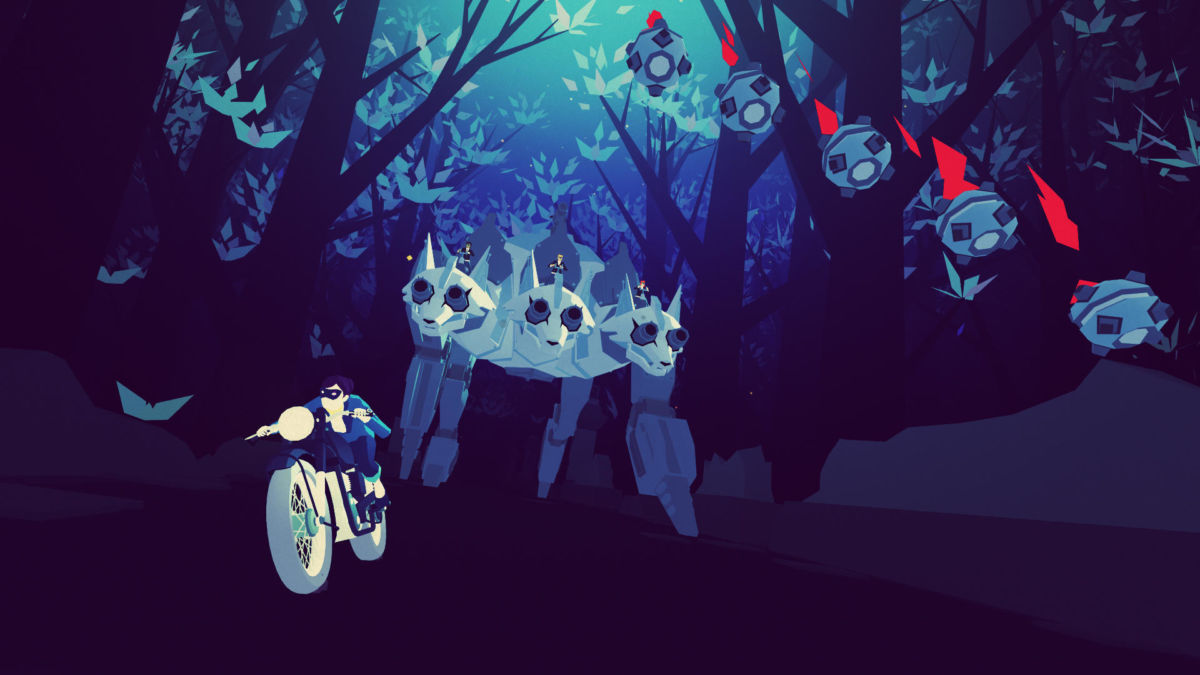 Sayonara Wild Hearts Is A Game Of The Year Contender

I’ve had my eye on Sayonara Wild Hearts from Simogo ever since it was announced at Geoff Keighley’s Festival of Fun Times, or The Game Awards 2018 if you prefer. From a purely visual standpoint, it’s not hard to see why, as the beautiful and vibrant contrasting colours gave Wild Hearts some flair in amongst a presentation filled with realistic AAA experiences and Josef Fares not swearing at the camera. However, I wouldn’t be surprised to see it at The Game Awards 2019 as it might just be a GOTY contender.

It’s a bold claim, especially in a year that’s already thrown out such bangers as Devil May Cry 5, Sekiro: Shadows Die Twice and Super Mario Maker 2, while games like DOOM: Eternal, Call of Duty: Modern Warfare and Death Stranding (starring Geoff Keighley) are in the pipeline. Sayonara Wild Hearts is a much smaller experience than those titles, but it’s no less ambitious, and a completely worthy contender for the ultimate crown. 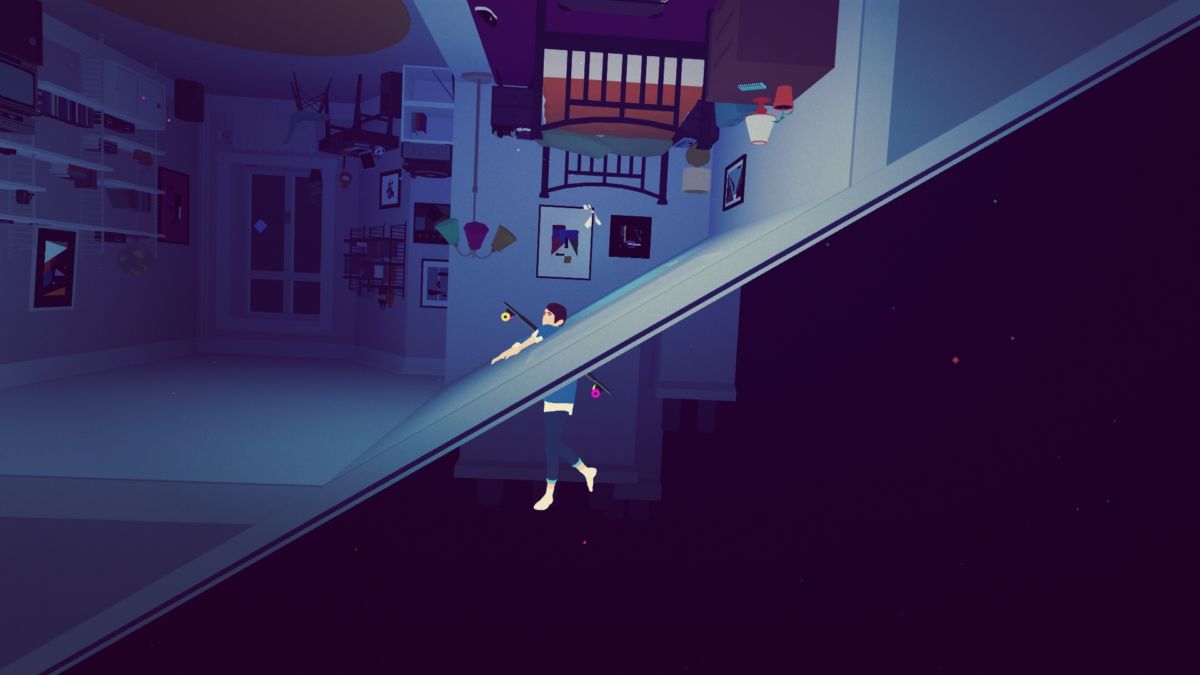 You control a young woman who has experienced the ultimate heartbreak, though it’s not really clear if it’s a broken relationship or some kind of personal loss. Either way, after being visited by a diamond butterfly, you tumble down the rabbit hole as it were, embarking on an ethereal journey to a variety of neon-soaked worlds where motorbike races and sword fights apparently go hand-in-hand. Honestly, I wouldn’t complain about a world like that.

The gameplay can be best described as an autorunner, as your character naturally moves across a set path throughout the level, and it’s up to you to avoid obstacles and nab those sweet collectibles, occasionally pressing the A button to nail some quick time events. It’s a simple enough gameplay premise, but Sayonara Wild Hearts manages to build on it throughout by introducing new mechanics and abilities. 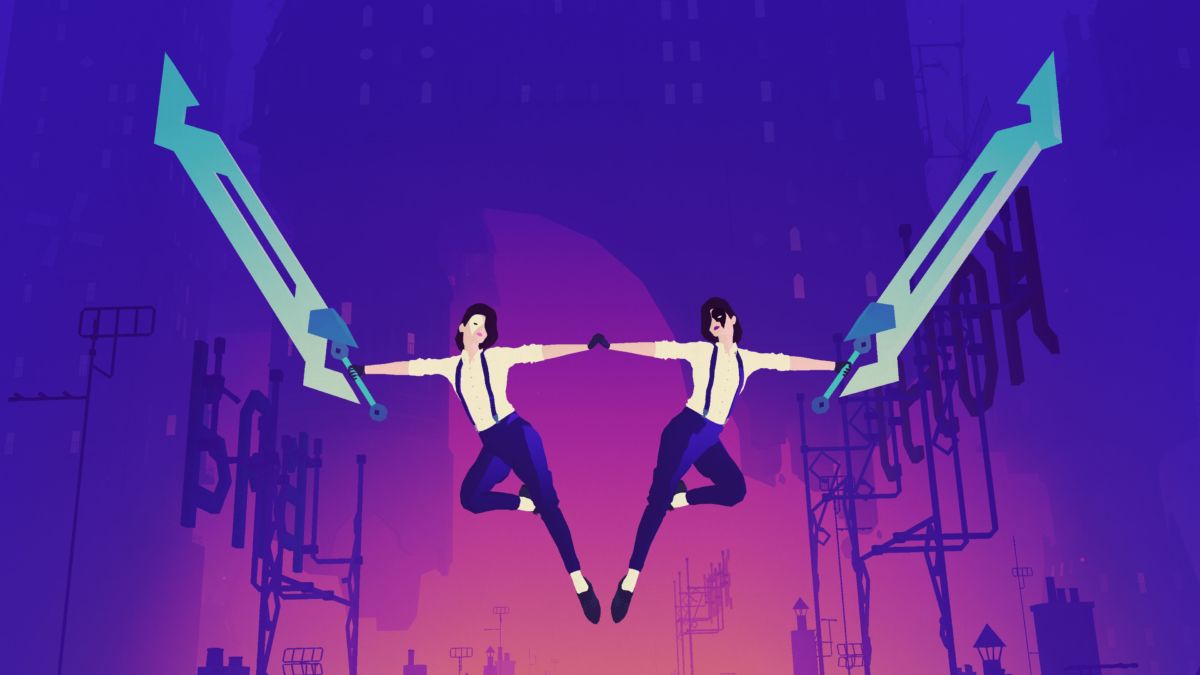 Whether it’s the ability to fly, fire lasers out of your bike, fire arrows at targets in a Rez/Aaero-esque manner or any of the other gameplay changes that occur during the game’s brief runtime (the Parallel Universes level is one such highlight), you’re constantly on your toes, never quite knowing what comes next. For such a short game, the level of variety in challenges is brilliant.

How the levels interact with the music is also a key factor, and one that works really well here. Patterns in the beat coincide with obstacles, changes to the level layout and the quick time button presses (again, Parallel Universes exemplifies this). In an early level, Begin Again, the game’s world begins to tear itself open as the song reaches its crescendo. It’s an epic moment in and of itself, but the marriage of audio and visual elevates the action to new heights. 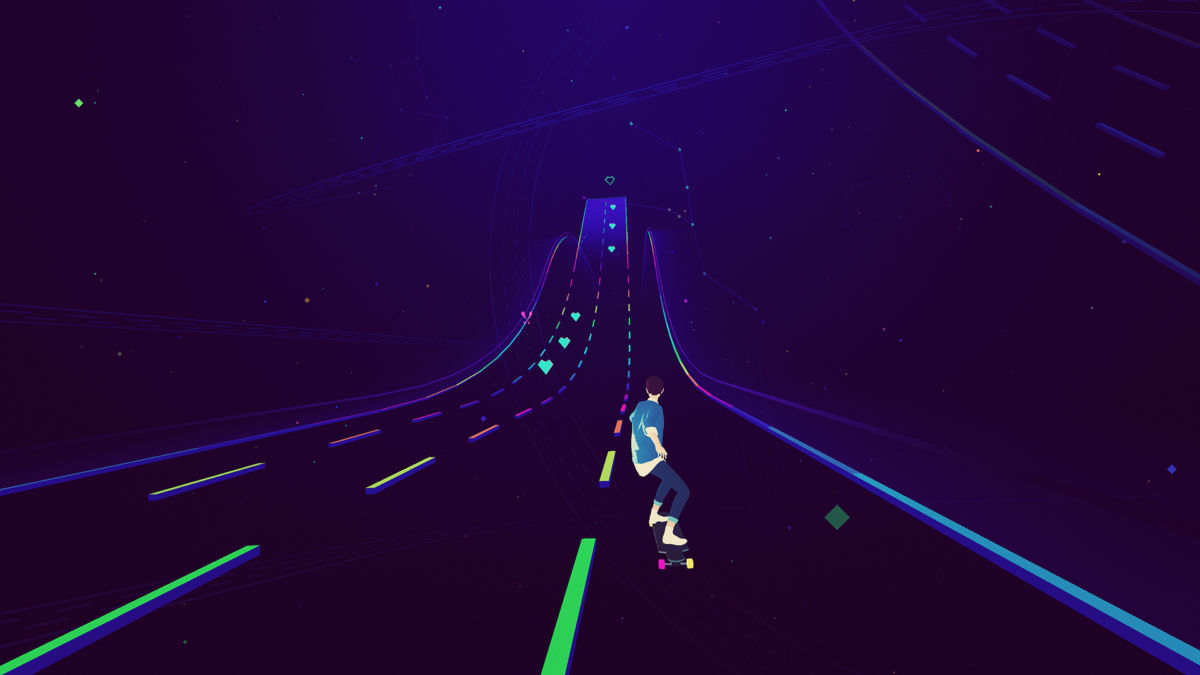 Sayonara Wild Hearts, to me, feels like the next evolution of a game like Spectra. If you’re asking what the hell is Spectra, it was a video game accompaniment to an album by chiptune artist Chipzel, similar to how the Sayonara Wild Hearts game is almost an interactive music video for the album of the same name by Daniel Olsén, Jonathan Eng and Linnea Olsson. Spectra only featured autorunning through one environment though, so this is much more of an improved and refined experience.

The genius in Sayonara Wild Heart’s formula, and the reason why it deserves Game of the Year, is the fact that it can be enjoyed by literally anyone, regardless of whether or not they’re a gamer or just someone who likes pop music/thought the graphics looked cool. Sayonara Wild Hearts caters to people from all kinds of backgrounds, making for a truly unified experience. 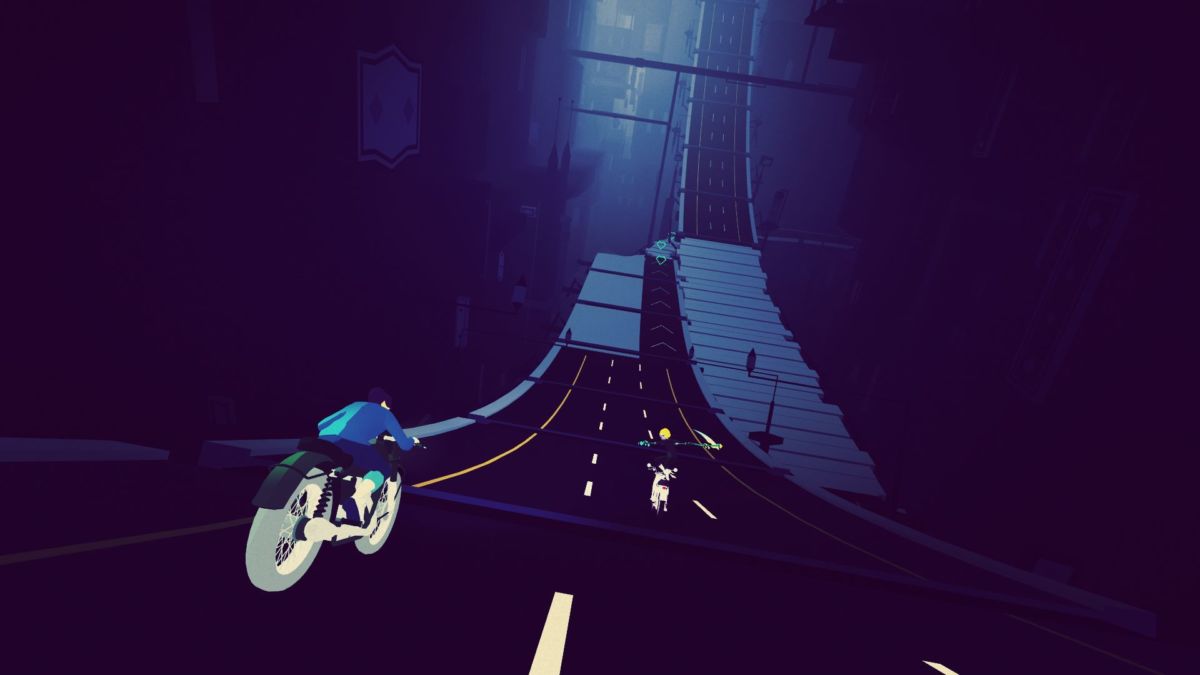 The music itself, a collection of synthy, dreampop bops, is broadly appealing enough to satisfy a wide audience, and the core gameplay is as easy or hard as you want it to be. If you just want the experience, you can mostly avoid the score boosting collectibles, though there are still obstacles to avoid. Meanwhile, high score chasers can try to find the best routes through levels, utilising risky moves by riding close to an obstacle to earn even more points.

There’s even an option to skip sections of a level if you’re stuck, a feature that can be turned off if you don’t want it. Death has no lasting consequence beyond resetting your score multiplier, so dying is only frustrating for those chasing the Gold Ranks. The controls, which consist of the left stick and A button exclusively, are intuitive enough that plenty of people should be able to comprehend how to play, meaning that Sayonara Wild Hearts strikes a nice overall balance between gamifying the experience for hardcore players while remaining accessible enough for others. 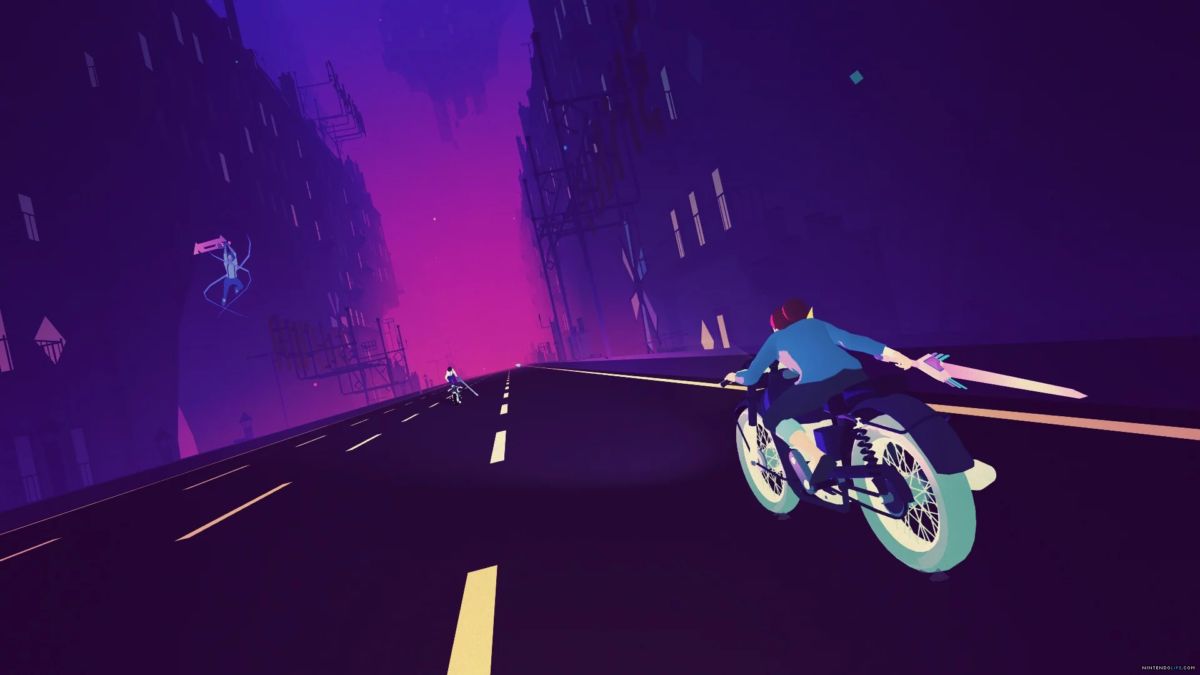 The vagueness of the plot also serves the same purpose, and it’s ultimately Sayonara Wild Hearts’ biggest strength. While the story isn’t really about much of anything, the overall concept is about learning to love yourself once again after experiencing a tragic heartbreak. The fact that the origin of the heartbreak in question isn’t really specified makes it more relatable.

Whether it’s the end of a long relationship, the loss of a loved one or the fact you’ve lost or missed out on a job you’ve worked so hard for, we’ve all experienced some kind of deeply personal trauma or heartbreak; one that might have led many down a dark hole from which it’s hard to recover from.

Watching the unnamed protagonist tumble down that hole, confront her fears, begin to love herself and emerge on the other side a happier, healthier human being is a journey we can all sympathise with, and one that offers a great deal of catharsis. Once her journey had finished and the credits rolled, it became hard to hold back the tears (it’s hard now as I’m writing this), and it’s that kind of emotional response that makes Sayonara Wild Hearts a worthy Game of the Year contender. If you have got a PS4, Switch or iOS device with Apple Arcade, check this game out. You won’t regret it.

MORE GAMING:
– 10 Best Nintendo Switch Indie Games You Should Check Out
– 40 Best Indie Games of All-Time
– 13 Most Relaxing Video Games For When You Just Need to Unwind