Devil May Cry 5 (Xbox One) REVIEW – Pulls Our Devil Trigger

With a great plot, beautiful visuals, and near perfect gameplay, Capcom deliver possibly the best Devil May Cry to date. 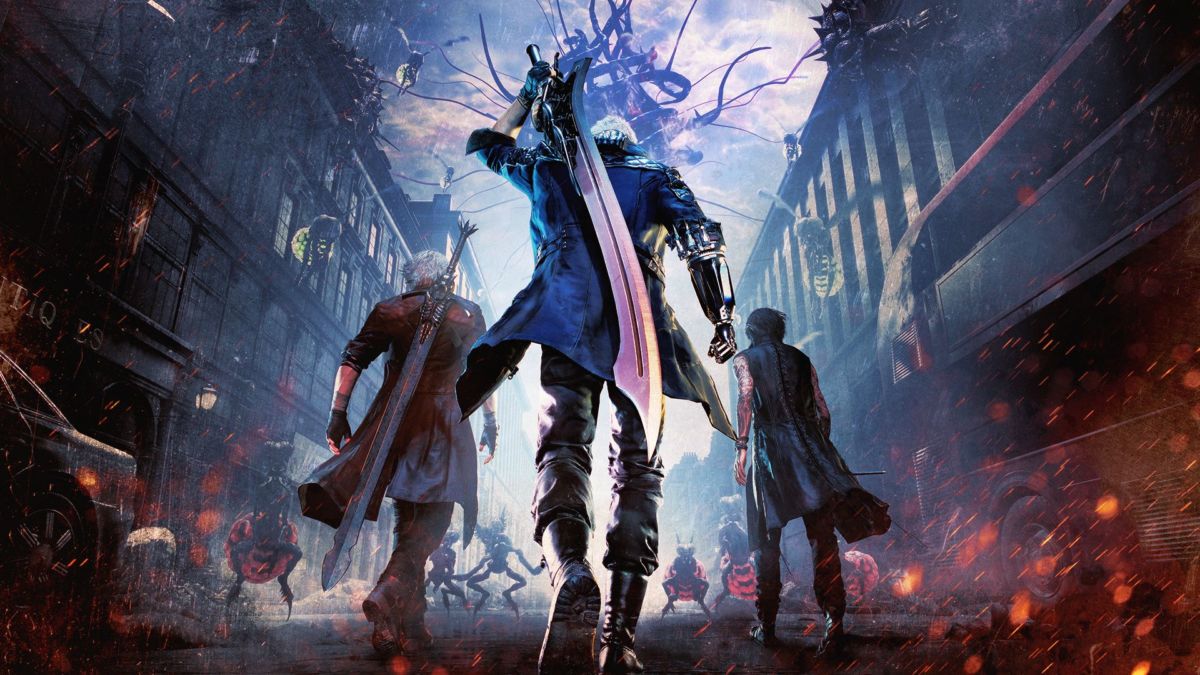 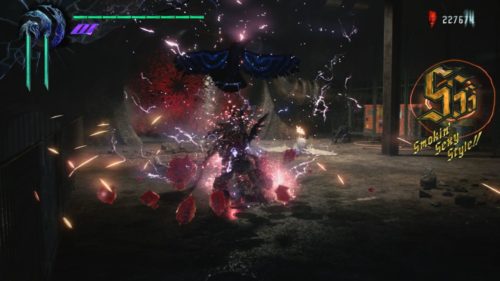 It takes courage to admit when you’ve made a mistake. Love it or hate it, Ninja Theory’s DmC: Devil May Cry was a huge step in the wrong direction for Capcom’s beloved series. Our cheeky protagonist was turned to an edgy nomad living in a decrepit mobile home, Nero’s backstory was never given a chance to be fleshed out before being seemingly thrown out, and the new story dropped all ties to the original games like they were old hat. By announcing and finally releasing Devil May Cry 5, Capcom has thoroughly admitted and apologized for their misstep. And what an apology it turned out to be.

Devil May Cry 5 wastes absolutely no time in getting to the heart of the action as it throws us in the middle of a fight with a new demon king named Urizen. The once demon-armed, now demon-armless Nero rushes in to assist a cocky Dante in taking down this new threat, only to retreat once Dante is overtaken by the formidable foe. While the plot is clearly a bigger focus this time around, you’re immediately told “this game does not promote smoking or the use of cigarettes” following their stylized usage during the opening credits, reminding us all that Devil May Cry is alive and kicking. 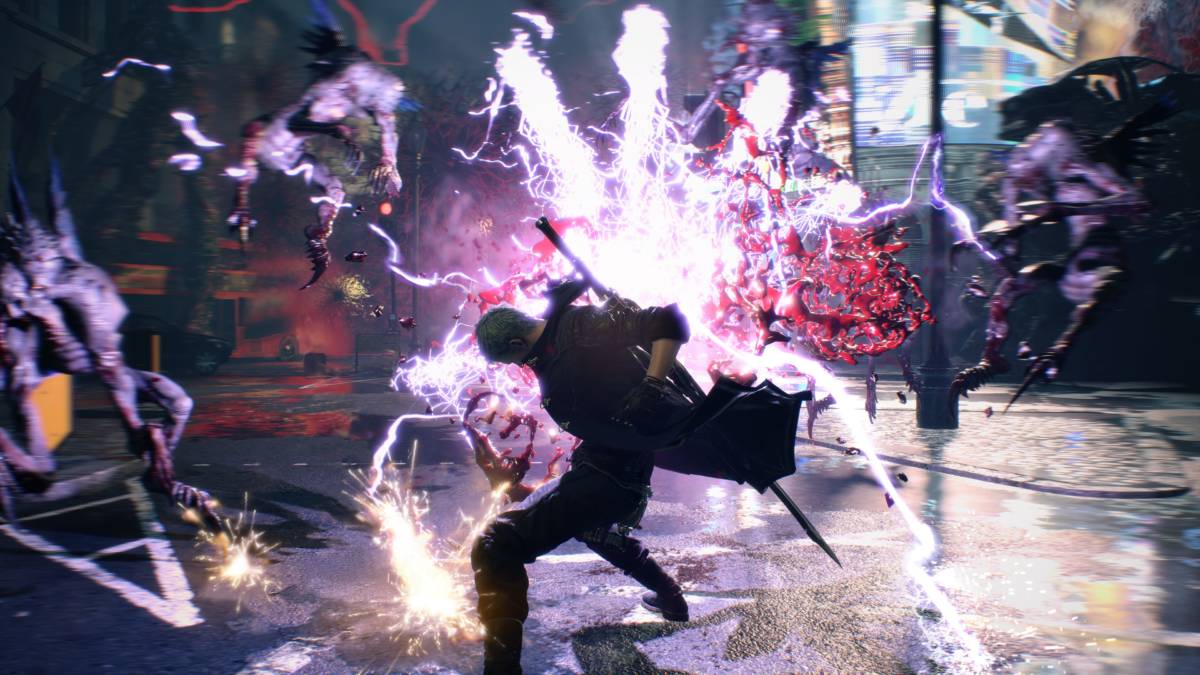 With the recovered focus on plot for the series, interesting storytelling devices are used along the length of the game. With a narrative that tends to jump around, most of the loading screens display a timeline showing each mission in chronological order. The date and time of day are shown before each major cutscene, all of them rendered exquisitely and with impeccable camerawork as the drama plays out beautifully between each of our favorite demons/half-demons. Even the return of short-lived characters like Morrison from the anime are given significant screen presence. as the interesting script leads to fascinating conversations, letting us get to know the most varied cast in Devil May Cry to date, the most interesting among them likely being the newcomer “V”.

Looking like a malnourished Criss Angel, it’s very easy for series veterans to dislike V. So easy that it might have been intentional. He’s weak, uses a cane to get around, is smothered in generic tattoos, and bears a striking resemblance to not only the previously mentioned Las Vegas magician, but also Adam Driver of Star Wars fame. To top it all off, he’s also a hammy poet. Devil May Cry 5 gives you every reason to loathe V, just to set you up to have the rug pulled out from under you as he develops into a crucial part of the story and one of the freshest additions to the game. 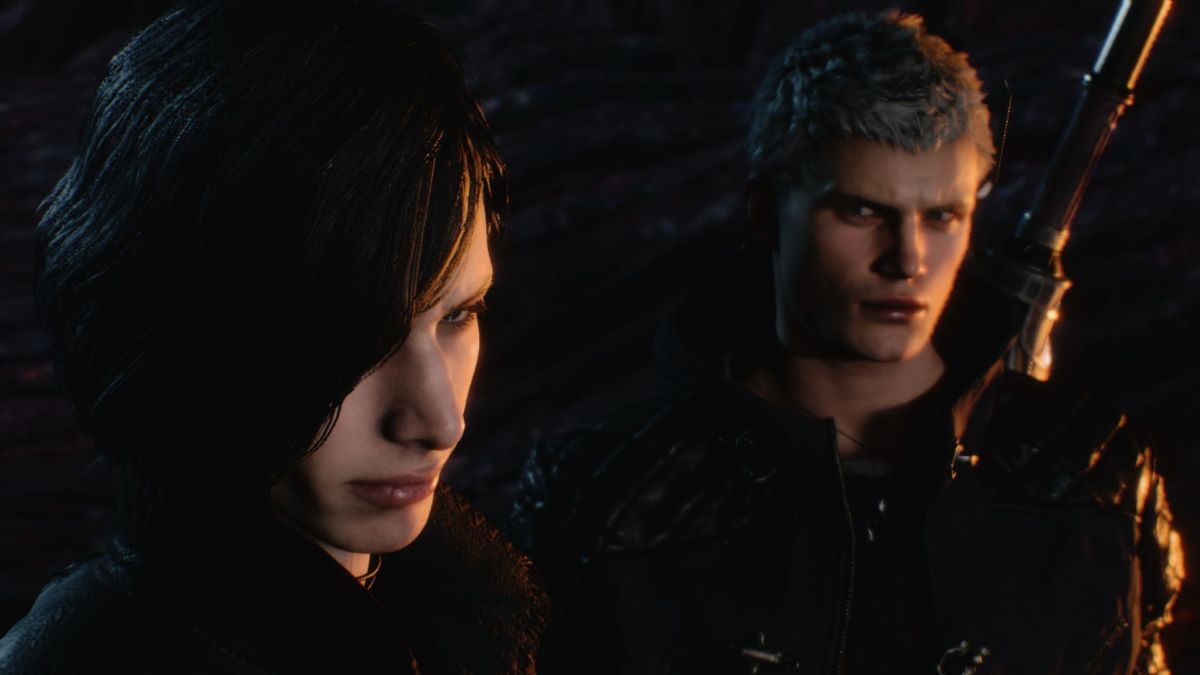 Attacking with shadow animals and a piercing cane, V’s combat can evolve from mashing relentlessly to strategically timed dodges and meter burns at the drop of a sparkling red hat. Requiring the weakened poet to weave between attacks to finish enemies off adds a layer of risk and reward to even the smallest of combat encounters, and I have no doubt that higher difficulties will require series veterans to forget everything they know, open their mind, and soak up all the strategic power the newcomer V wields.

Eleven years ago, Nero was the relatively disliked newcomer to the series. He was more naïve than Dante, had an extra edge to him that made him seem whiny, and even started the game wearing a cast. Once you got behind the controller though, he mixed up Devil May Cry’s formula in a major way. His Devil Bringer arm and Red Queen sword brought grabs and charged melee to the table and led to Nero being arguably more versatile than even our beloved Dante could be. 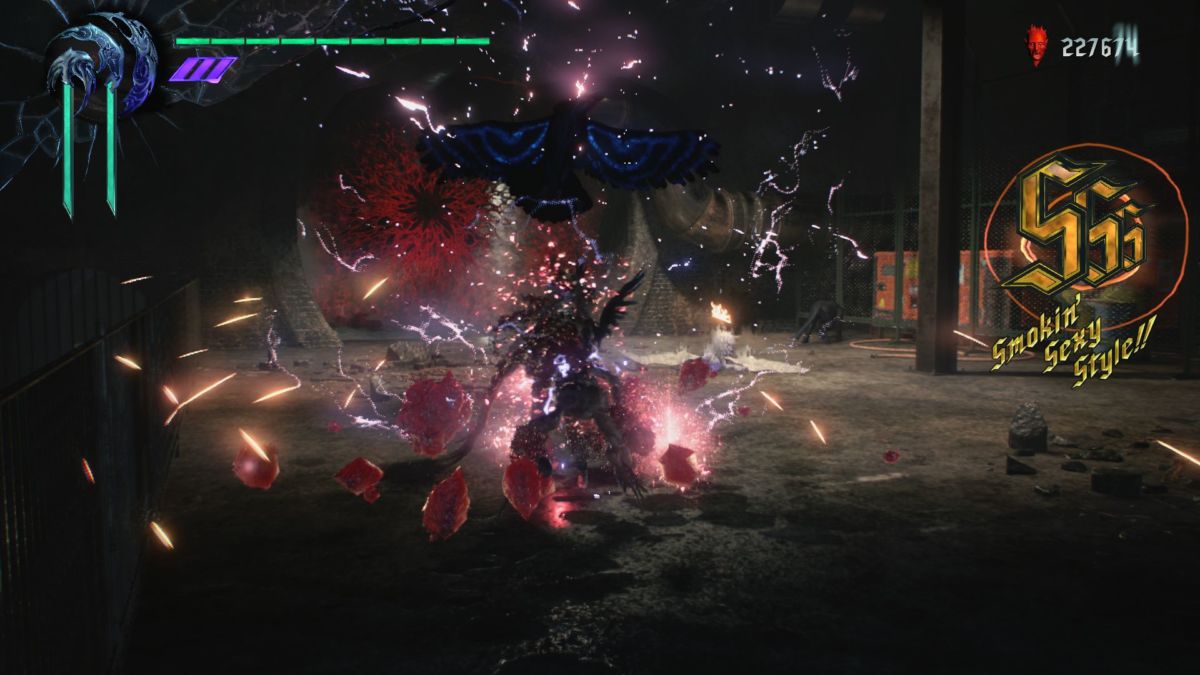 Devil May Cry 5 looks at that versatility and laughs as it gives Nero the all-new Devil Breaker, an arm with over a dozen attachments that unlock new attacks, abilities, and even some good humored nerfs, all taken in stride as our second favorite white-haired protagonist takes center stage once more. This gives Capcom a chance to conclude Devil May Cry 4 (finally) and build on the backstory of this relative stranger with a few twisty revelations, and a climax where he finally outshines our baby Dante.

Dante didn’t need fixing. Aside from the amazing new animation work, Dante spends the majority of your first few hours being the carbon copy of Devil May Cry 3, much like he was in his 4th outing. Combos are second nature, Styles like Trickster and Royal Guard return, and even classic weapons like Balrog rear their head to ease you in. Then the fun begins. Rebellion (Dante’s iconic sword) is destroyed, tearing away all familiarity and loading you up with a new form of Devil Trigger known as Sin Devil Trigger, where Dante becomes a four-winged beast and metaphysical blades do his bidding. Like I said, Dante didn’t need fixing, but the beautiful bastards at Capcom fixed him anyway, and he’s all the better for it. 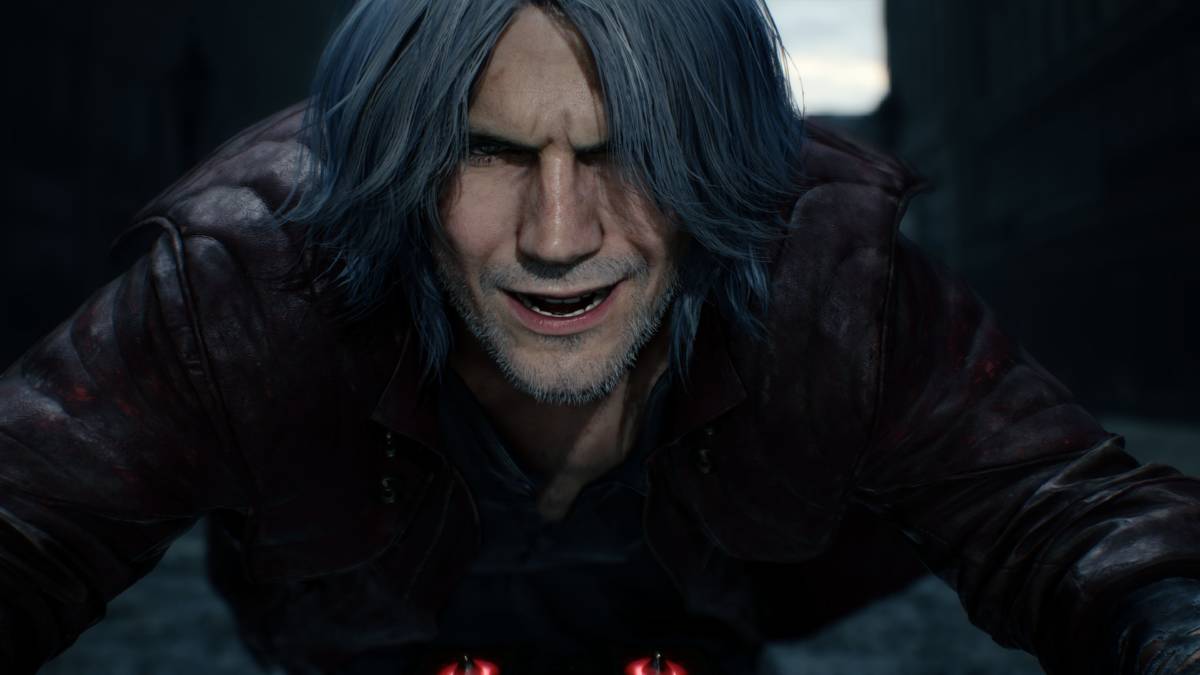 Level designs are generally more open than they’ve ever been in the series (barring a handful of large areas in the first and 4th game), welcoming in-depth exploration with tons of hidden orbs everywhere, a new Secret Missions system where you have to line up pentagrams hidden in the world, and even some light puzzle solving, a feature the series was once known for. (quoting Dante: “It’s been a while since I’ve used my brain this much”)

So the characters are great, the new gameplay tweaks are welcome additions, level design stays true to the series, and the plot surprisingly kicks ass. What’s the catch? The time it takes to get to it all is a pretty catchy catch. Devil May Cry 5 is fraught with loading screens. Simply going from the Start Menu to the Main Menu presents a hefty load screen, then selecting a mission requires a load, customizing equipment requires a load, and then when you finally start a mission, it needs to go and load before and after the initial cutscene. Even if the loading times were brisk, the constant stopping and starting makes getting to the action tedious. Thankfully, once a mission is started, it’s fully loaded for good. 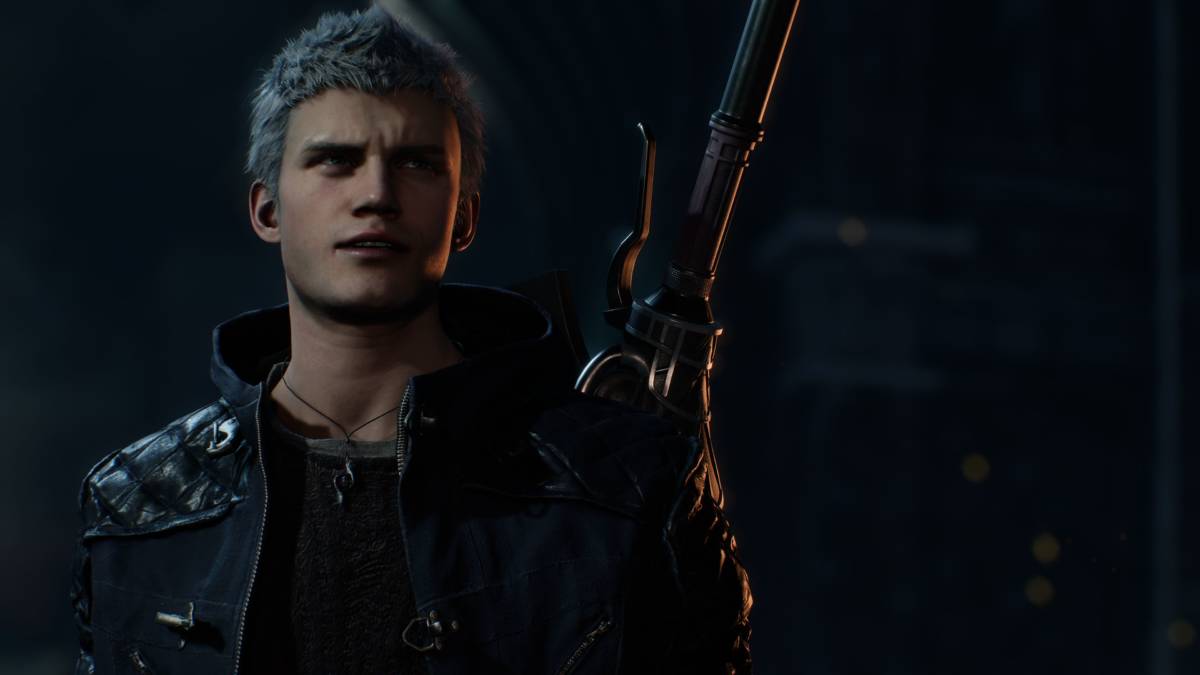 Another problem that I can’t reach a decision on is the weaponsmith and general loudmouth, Nico. One minute she can be a charming and relatable side character, the next she sounds like a Saturday morning cartoon version of Mrs. Texas, sniffing demon horns and insulting our protagonists for the fun of it (primarily Nero and Lady). I’ll leave it up to you, but any scene she’s in may as well be a crap shoot.

Devil May Cry 5’s soundtrack absolutely kills it. Nero’s theme, Devil Trigger, has been a fan favorite since its reveal, and even songs I didn’t have much faith in like Dante’s battle theme ended up drawing me into every combat sequence. What really caught me off-guard, though, were the boss themes. A lot of them are unique to their fight and are 100% rad, leaning hard into devilish riffs and heavy drums and spiritually giving me life, especially tougher fights like the final boss, who is difficulty spike upon difficulty spike, which was made all the more manageable with a glorious score cheering me on.

The weakest part of the game by far is the multiplayer, which isn’t even bad. It just leaves you questioning why it’s there. A notification will pop up on-screen telling you that you’re playing with “xDanteMustDiddle92x,” but unless you’re in a very specific (and very boring) arena-based mission, the chances of you interacting with another player are slim. You’re usually on opposite sides of the level getting a distant glimpse at their battle or separated by something as simple as a chain link fence. I’ve never had the game lag or this feature cause any problems in my game, but it’s used in such a throwaway way that you could have put pre-canned AI in place of the players and it wouldn’t have made a lick of difference. At least you get Gold Orbs if they’re nice enough to give you a Stylish ranking after they finish their mission.

Verdict
Multiplayer and loading screens aside, Devil May Cry 5 is exactly what it was meant to be and more. With a great plot, beautiful visuals, and near perfect gameplay, Capcom delivers possibly the best Devil May Cry to date.
9