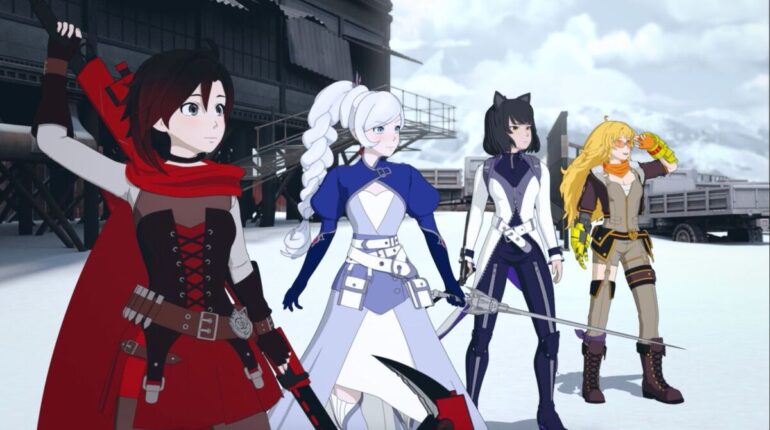 RWBY Volume 7 closed on a momentous cliff-hanger, with main antagonist Salem finally making her move and threatening the city of Atlas with a massive force of Grimm. The only thing standing between her and victory is team RWBY, but how does a volume which promises drama and action open with its first episode, ‘Divide’?

‘Divide’ starts with a few brief seconds of a black-haired girl scrubbing a floor, only to transition suddenly to Cinder and Neopolitan flying a ship towards the giant whale Grimm. The way the filming is shot tells the audience that black haired girl is a younger Cinder, and though it’s a bit late in the series to start developing her character, it’s nice to see a villain who has been a staple of the show getting some backstory.

It’s interesting to see the Whale Grimm is not just some giant monster like the rest of the Grimm, but also some sort of a biomechanical creation: it’s got landing pads for Cinder’s ship, has a building-like interior and Salem has the power to look through its skin like a window. It’s a nice set design and certainly very creative. Opening the episode on such a dark and dreary tone is a nice mood setter, with a haunting choir setting the mood. It feels reminiscent of the beginning of volume 4, with the heroes divided and the bad guys in a position of strength.

The rest of the scene, however, is a bit of a mixed bag. Tyrian and Cinder still have a petty rivalry between them, and Cinder is still cruel to Emerald despite the latter being all doe-eyed for her. Salem, Emerald, Mercury, and Hazel all get updates to their costume design, which are aesthetically plain – with the exception of Salem’s – and doesn’t seem necessary. With team RWBY’s costume changes, it made sense, like getting different clothes for the cold weather in Atlas. However, while Salem’s costume seems like she’s ready for war, the other bad guy’s designs aren’t much to marvel at. It’s interesting to see Neo getting visibly upset at Cinder taking the credit for stealing the Relic of Knowledge, which hopefully will develop into interesting character conflict as the story continues.

The episode changes to the Faunus dominated slums of Mantel, where Oscar – almost coincidentally – gets picked up by the rest of the team. As they fly back into the city, streets down below look unusually calm given the events of the previous volume, as well as a Grimm horde right on the city’s doorstep. Surely the Atlesian military, which has been portrayed as one of the strongest in the show’s universe, wasn’t defeated that easily/ The team sneak into a bar, helped by Robyn’s Happy Huntresses. The rest of the episode focuses on the team regrouping and debating their next move, and the dialogue feels like it could’ve been tweaked a bit.

For example, Weiss making the comment ‘we’re never going to sleep again, I just know it’ doesn’t seem to fit right with a character who is usually so prim and proper. It’s a bit too goofy for her. It sounds more like something Jaune would say. Additionally, Yang being the one among the group to challenge Ruby doesn’t make sense: Yang has always loved and supported her little sister, and her being the first one to question Ruby’s leadership decisions doesn’t make sense.

It’s clear the writers are trying to separate the group via their decisions, but Yang and Ruby would have been the most unlikely ones. Previous volumes have shown that Yang is fiercely protective of her sister, and it’s questionable why Yang would go against her and leave her to her own devices now, in what is arguably the most dangerous scenario they’ve faced. There’s also some really jarring scene transitions where a character is in a future location, then instantly travels back to the present.

While most of ‘Divide’ makes the mistake of telling instead of showing, there are some nice visual storytelling elements, like Yang stepping on a broken watch only to find some random citizen’s discarded affairs with Grimm nearby. It adds on to the dreariness and hopeless tone which the opening episode is going for, even if it was just a small scene. It’s also nice to see Penny, a happy and powerful character, have some self-doubt about her purpose.

The last scene finishes in a hospital. First, it shows the Ace Ops surrounding Clover, who is laid down in a bed. Though it looked like he was killed in the last episode of Volume 7, and he’s certainly looking pale now, perhaps it’s not the last the audience has seen of this character. Meanwhile, in another room, Ironwood and a very injured Winter talk about the state of the attack on Atlas and what to do. The dialogue flows a bit better than the rest of the episode, and it’ll be interesting to see Winter, a driven soldier, handle the physical and mental healing process after her near-death fight with Cinder.

‘Divide’ concludes quite abruptly with Ironwood shooting one of the Atlasian councilmen in the face after he challenges Ironwood’s use of martial law. While this is a shocking ending, it’s a really drastic change for the character. Ironwood has been portrayed as slowly losing his mind as he obsesses over the defence of Atlas, but this action is a hell of a curve. It’s very like Anakin Skywalker turning to the dark side in its sudden nature.

As with every volume, there is a brand-new opening, and Casey Lee Williams’ vocals accompanied by Jeff Williams’ combine to create a beautiful track. The accompanying animation is very nice as well. It feels very reminiscent of the volume 3 opening, acting as a foreshadow to the Volume’s dark story tone.

As an episode, ‘Divide’ may not have been the strongest way to start a volume that promises intense action. It’s very dialogue heavy, which may have been the writer’s way of reintroducing the audience to the world of RWBY, but in telling instead of showing, it weighs down the episode. However, there are some nice creative choices in the design here, and the stage has been set for what will hopefully be an explosive volume. 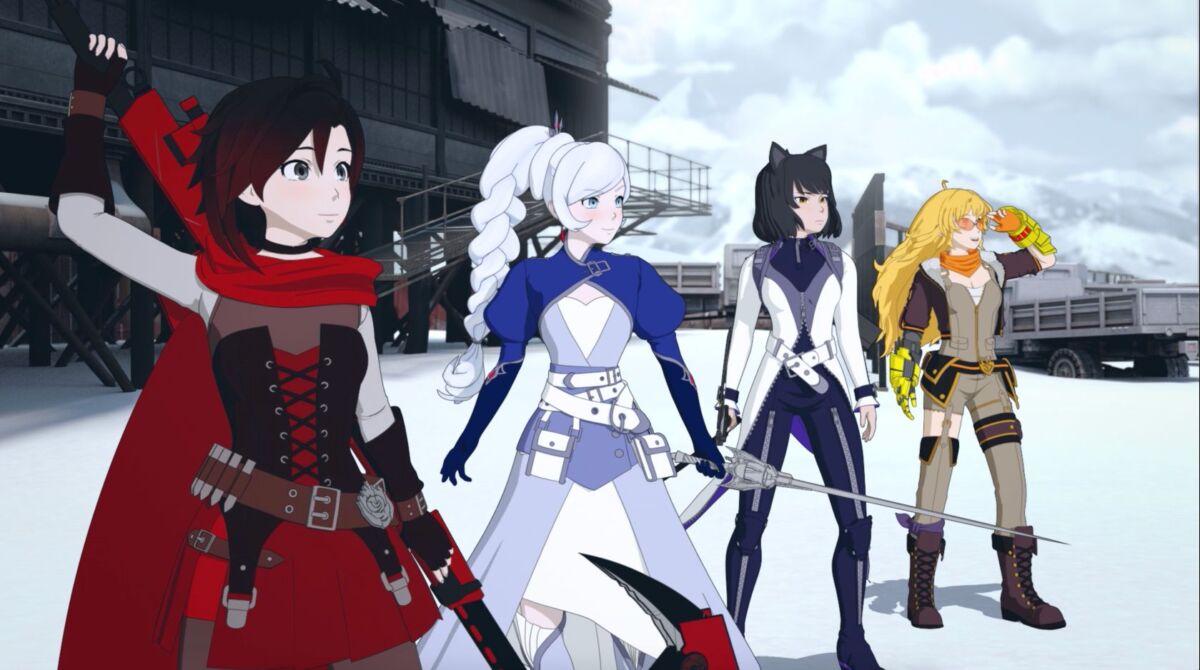 Verdict
While it may be dialogue heavy, Divide’s slow introduction acts as a way to ease viewer’s back into the story.
6.5
Cultured Vultures is a pop culture website established in 2013 covering all things gaming, movies, and more. We eat your words.
All The News On The Biggest Games