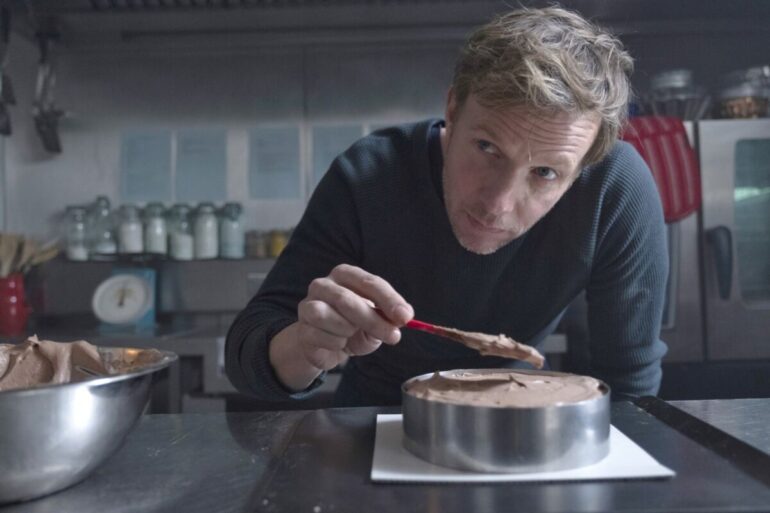 I sat down to speak with Rupert Penry-Jones about his new movie Love Sarah. Penry-Jones is known for his roles in TV shows like The Strain and Spooks, as well as his remarkable depiction of Captain Frederick Wentworth in 2007’s Persuasion.

In the movie Love Sarah, Sarah and Isabella are on the brink of opening their own bakery, when Sarah gets caught in a fatal accident. Left to pick up the pieces, Isabella wants to move on, until Sarah’s daughter convinces her, and her grandmother Mimi, that they can still open the bakery together. Penry-Jones plays Mathew, a kind of rock-star chef who trained with Sarah and Isabella at culinary school, and swoops in to help the women realise Sarah’s passion.

What attracted you to a project like Love Sarah?
I like the idea of a film based around people making cakes with the whole success of Bake Off and such. I thought that was a good idea and I love the three generations of women and the relationships between them. I thought my character seemed like a fun, fun part to play so I thought, “Why not give it a go?” It was a lovely part of London to film in. It was an easy decision. We could all use a film like Love Sarah right about now.

The sweet, saccharine type of film? [We laugh]
And Celia Imrie is somebody I worked with years ago. I did a film called Hilary and Jackie with her, a film about Jacqueline du Pré. She played my mother in that, and I was keen to work with her again.

Your character Mathew, was a chef at a two-star Michelin restaurant. How are your skills in the kitchen, and did you have to take any baking classes to prepare for the role?
[laughs] No, I didn’t go for any classes. I’m not much of a baker. I do cook regularly, but not baking cakes and such. That’s something my daughter does. No, baking wasn’t my thing. I just had to do a bit of this [mimes sprinkling] and a bit of that [mimes stirring]. [laughs] It wasn’t too difficult, it wasn’t like I was really cooking.

So, if you had to make a choice between these three hobbies: trapeze, dance or baking, which would you choose?
Baking, 100%.

In Love Sarah, Mathew and Isabella prepare desserts from all around the world for their customers. What’s your go-to dessert or comfort food?
I have an ice cream machine, and I make ice cream. In terms of desserts, ice cream and pancakes. Those are the two things I can make. My mom always makes crème brûlée at Christmas, which is always nice. I’ve never actually made it myself. So I’d say ice cream.

Love Sarah is a film about passions and holding on to them. For Isabella and Sarah, opening a bakery together was their passion project. Do you have any passion projects you have yet to realise?
I’d always wanted to kite surf. And I just got back from Mauritius, I was doing a film there, just before Christmas. I had some spare time, there were no tourists there, and I managed to find an instructor. It’s hard, it’s really hard. I’ve been seeing a chiropractor every week since I got back! [We laugh] But no, it was worth it. I’m getting too old for things like that. In terms of a project, I do a lot of cycling at home, and I’ve got this idea about doing this road trip cycling film, about a group of disparate people having to go from one part of the British Isles to the other. There’s a big long ride you do in England, called Land’s End to John o’ Groats, which is basically one end of England, all the way to the top of Scotland. A lot of people do it for charity, and I’m trying to get together a film about a group of people doing that. It’s not as easy as you think, trying to get a film together. It would be funny; it would be a romantic comedy.

Is that one of your favourite genres to be in? I watched Getting to Know You last year.
Oh, did you? [laughs] It’s a genre I would love to do more of. I love watching it, I love being in it. There isn’t a genre I don’t like really. I’ll do anything if it’s well-written.

It’s good! Good for the earth.
Yeah exactly! If you’re doing a film that doesn’t have lots of money, they’re very keen not to spend lots of it on expensive clothes, so the costumes end up being really cheap and not very good. So if you can bring in some of your stuff that fits, they’re really happy to use it. And whenever I’m on a job and there’s some nice clothes I’ll try and buy them, because they always sell them to you cheap. And then when I go on to the next thing, I’ll offer them something that I might have, like a suit or whatever that would in their film. I say: “If I let you have the suit, then maybe you let me have that nice jacket that I’m wearing.” So, it’s a little give and take. Most of my clothes are all costumes. [We laugh]

Speaking of costumes…I have to admit that me and my friend – she’s a writer too – are ardent fans of your Captain Frederick Wentworth from 2007’s Persuasion.
[laughs] Yes! That was one of my favourite jobs.

It’s so good! When I found out about this interview, I asked her if she had any questions for you. And she said, “Nothing that would be appropriate.” [We laugh] Would you like to do another period film?
Definitely. Yeah I’d love to. I’ve always wanted to do Jane Eyre. I did it, but I didn’t do the part I wanted to play. I played St. John Rivers, I would love to play Rochester. I just think it’s a great character. There’s lots of good parts in all of those period pieces, like Dickens or Jane Austen. They’d normally wait like ten years before they bring another one around, so maybe in the next wave.

What are some of your upcoming projects?
I just finished filming in Mauritius, a film called Prisoner of Paradise, it should be coming out in the summer. Set in the 20s, about a girl whose parents die, and she comes out to Mauritius to live with her uncle and aunt on the plantation, and it’s a love story between a young girl and one of the workers on the plantation. None of her family wants her to be with this person, a kind of Romeo and Juliet feel to it. I play the possessive uncle who’s trying to get to marry this money guy, to save myself and my plantation from its dire financial trouble. I’m a bit of a mad, nasty nasty man in that one. I also just finished shooting on the new Batman film, I play the mayor of Gotham City in that. And I’ve got a four-part drama I shot in Ireland, called The Drowning, which should be coming out this summer as well.

You can catch Love Sarah in theatres or VOD.