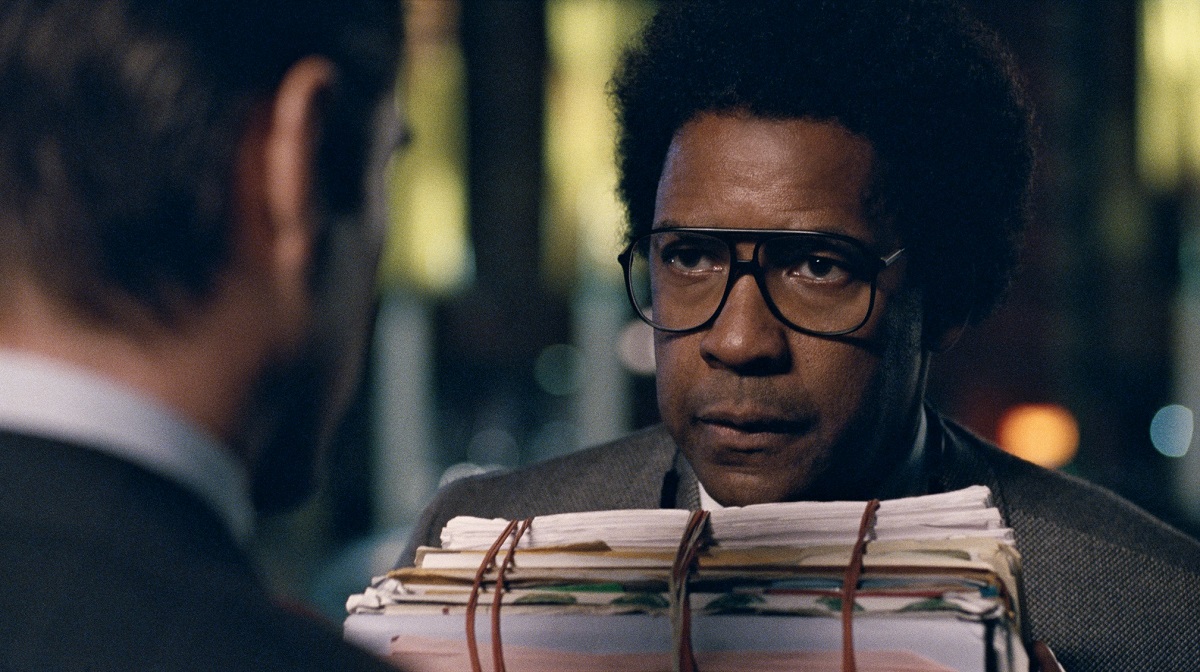 Denzel Washington delivers a striking performance in Roman J. Israel, Esq. The attorney is unlike any character that Washington has portrayed in recent years.

Writer-director Dan Gilroy follows up on news thriller Nightcrawler with another thriller that mixes between the legal and activist worlds–one that has been tightened in story after cutting 12 minutes between the world premiere in Toronto and this week’s wide release. The film plays as a tighter story with the changes made by Gilroy and Washington.

Washington stars as a complex but idealistic defense attorney, Roman J. Israel, in Los Angeles and serves as a behind-the-scenes partner to his mentor, William Henry Jackson. There’s a lot of layers to the character–written with Washington in mind–one whose actions have taken a toll on him even though he knows that his fight is the right one. It’s only after Roman’s mentor falls ill and dies that he starts to realize that there are going to be some major changes to his life. Jackson, a legal activist and civil rights icon, was an important part for Israel and, all of a sudden, he’s gone.

In the time in which Jackson is fighting for his life, one of his former students, George Pierce (Colin Farrell), rises to the challenge of filling in the big shoes and helps to handle the casework at the firm. Israel fights to keep the firm alive in hopes of leaving a legacy for Jackson, but the firm’s fate is sealed and the man who fought for injustice for his entire life is forced into taking a job at Pierce’s firm where he ends up making some questionable decisions that affect his character.

Having already realized that he’s going to need a new job before the doors shut on him for good, Israel meets with a young equal rights activist, Maya Alston (Carmen Ejogo), with hope of maybe getting on as an attorney. Maya sees something in Roman that makes her feel vulnerable enough to open up to him. It feels as if Maya was forced into being a potential love interest, but Gilroy should have just focused on having the two fight for equal rights rather than try and work in a love story. There’s not enough time to develop a blooming relationship.

On the editing front, it was smart of Gilroy, editor John Gilroy, and Washington to move the Lakers game scene to earlier in the film. It gives us a better idea of who George Pierce is and what kind of lawyer he truly wants to be–and leads Israel to realize that he made some poor decisions that reflect badly upon him as an attorney. Israel, for that matter, goes full circle in this movie as Roman’s beliefs nearly destroy him. Washington has played characters that are morally bad and morally right, but it’s hard to pinpoint where exactly Roman fits on the spectrum.

Cinematographer Robert Elswit helps drive home the character-driven film. It doesn’t matter from what angle Elswit sets up the shot, every shot in the film is either from Roman’s point of view or whatever or whoever he’s looking at. Elswit is very much a storyteller in this regard and it helps to complement Gilroy’s direction of the film. We’re essentially asking ourselves why is something happening and in turn, Elswit challenges the audience.

Roman J. Israel, Esq. may not be of the same caliber as either Fences or Nightcrawler, but it serves as a fine vehicle for Washington.