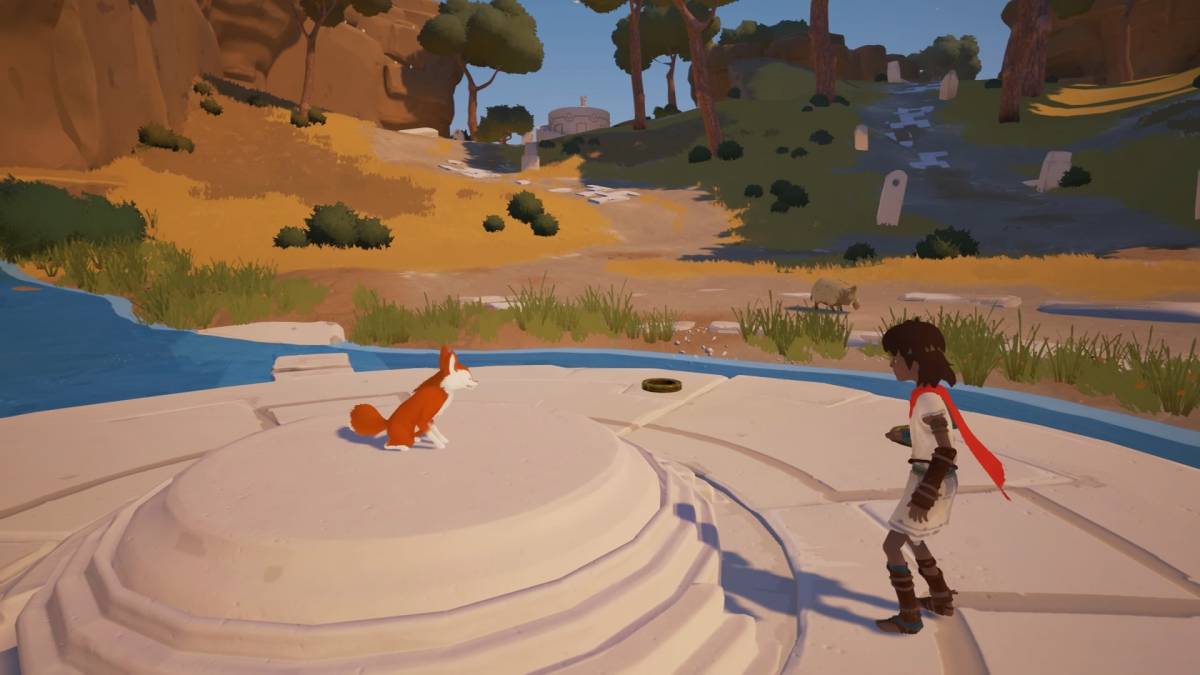 Having played a fair chunk of the early stages of RiME in a demo at EGX Rezzed, I went into the full title with high expectations. I think this is a game everyone will experience differently. Some will find the puzzles too unchallenging, the pace too slow and the premise too simplistic; I am not one of those people.

You’re more-or-less thrown in at the deep end, with the unnamed Boy awakening washed up on a beach with no idea as to how he got there. Guided by the Fox and observed at a distance by a mysterious stranger in a hooded cloak, the Boy must explore, use his voice to shout/sing to activate magical objects and solve puzzles in order to unlock the island’s secrets and discover what happened to him. Along the way, he can pick up a variety of collectibles from carved toys to outfits, so exploring every nook and cranny of the game is definitely rewarded. However, be warned: what begins as a relaxed and somewhat whimsical frolic on a sunny island becomes something much more dark and creepy later on in the game. This is a welcome change of tone.

I definitely found the story to be very compelling with a satisfying payoff at the end. RiME does a good job of gently guiding the player to their own conclusions before the relevant plot point is revealed; some of this is achieved through the use of paintings viewed through keyholes. These are easy to miss, although they are additional rather than essential. It’s not the deepest story, for sure, and I can see why a lot of people would be left somewhat unsatisfied – at times it can feel a little slow-paced. Having said that, anything fast or frenetic would seem out of place in a game oozing serenity. 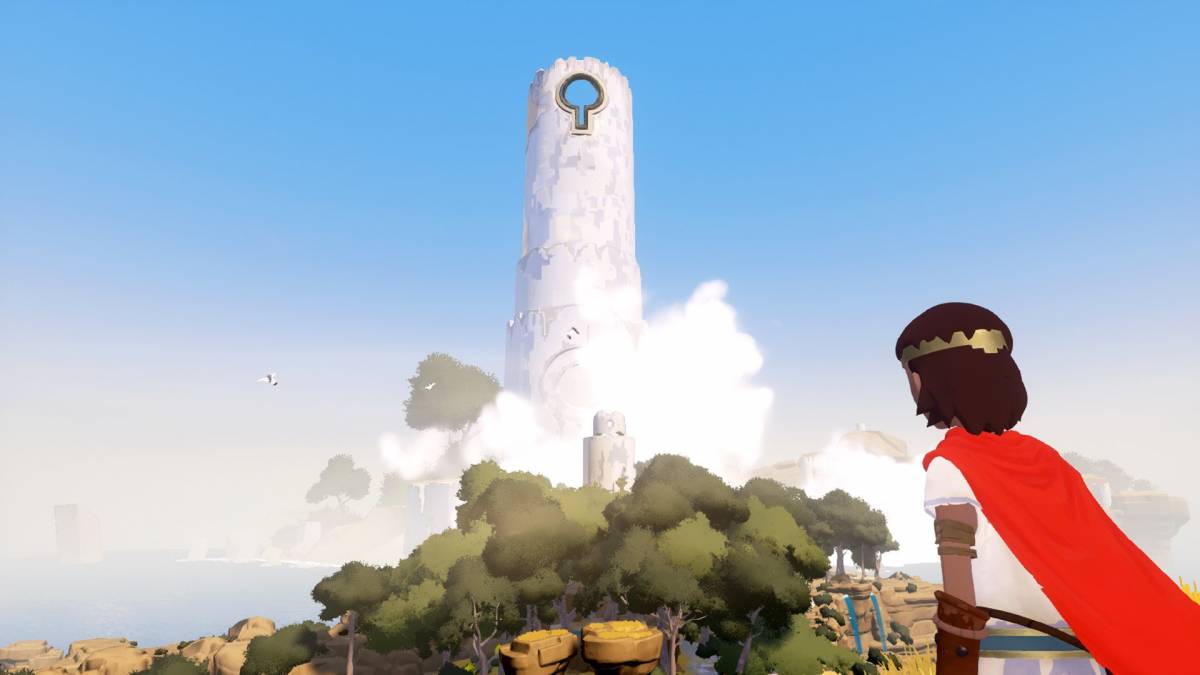 Gameplay-wise, RiME is pretty solid. The controls are simple and easy to grasp, with the regular appearance of the relevant button at pertinent moments to provide the player with a memory boost if necessary. Platforming is relatively tight: ledges that can be grabbed are fairly easy to distinguish and the Boy will reach for them when jumping from one to another. To me, the platforming felt very reminiscent of Uncharted 4 in particular, with even the same nail-biting leaps that our brave hero will only just make by the skin of his teeth. Maybe I just suck at platforming, but some jumps are easy to mistime so I did find myself plummeting to my doom on numerous occasions. This is exacerbated with certain sections where the camera will pan out and become immovable, a device attempting to give the player a better view of a tricky path, as it can mean it’s much harder to judge some distances.

For those of us who despise underwater sections, I have bad news: there are a fair number of them. It’s pretty easy to get disorientated beneath the surface too, especially when swimming in murkier waters. While there are air bubbles for replenishing oxygen and usually more than enough time to get to where you need to be, slowly watching the screen darken as the Boy runs out of breath can be rather toe-curling, and these sections were by far my least favourite.

Fortunately, you can drown or fall from ledges as much as you like as death holds no consequence. The Boy simply respawns, ready to continue his adventure. This, alongside the gently cycling day and night and lack of incessant combat leaves the game with a sense of being totally unhurried. There are a few moments where this is not the case, but for the most part the game can be taken at a leisurely pace. With gameplay that is so heavily exploration-focused this is definitely welcome, as there is no crippling consequence for spending too much time exploring that one cavern. 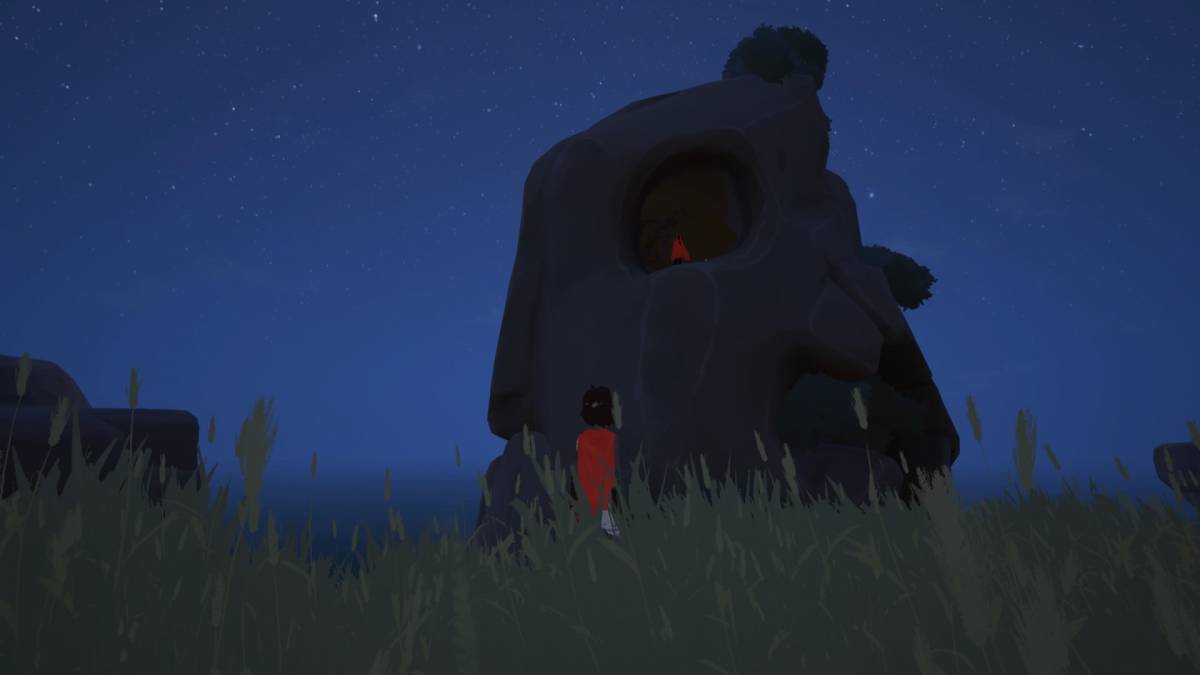 What is truly striking is how visually stunning RiME is. Every colour is so vivid: the blue of the sky and sea, the red of the Fox and the Boy’s cape, the white of the buildings and seagulls. Whatever the environment the Boy is in, be it sunny beach or dark cavern, the rich colours and beautifully cel-shaded graphics give the mysterious world life and depth. I did experience a few framerate drops, but these usually occurred when control was taken from me for a sequence, which didn’t ruin the immersion.

However, probably the best thing about RiME is its soundtrack. I’m a sucker for a good soundtrack. It’s so phenomenally gorgeous that even writing about it is making me feel things. Once, I got up to do something and when I came back I simply sat in my chair, closed my eyes and listened to the soothing piano of the pause menu. The Island’s theme in particular ebbs and flows as though emulating the waves gently lapping at the shore, with a haunting leitmotif and swells that give you goosebumps. I spoke about the soundtrack in my preview post but absolutely no words could truly do it justice. It’s breathtakingly emotive, the kind of music that reaches deep inside you to tug at every heartstring and fibre of your soul. In fact, I personally don’t feel anything is lost by turning off the sound effects and simply having the music play as you do.

RiME has no dialogue, so sound design plays an even more important role than in a lot of games. Words are replaced with a combination of cutscenes and cinematics, blended beautifully with music that paints a vivid picture. There truly doesn’t need to be a single word uttered for every emotion to be conveyed as the stunning melodies and the Boy’s own singing manage to do it all in an unforgettable fashion.

In my opinion RiME is a truly great game, a breath of fresh air amongst a sea of shooty-bang titles and RPGs. As I said before, this won’t be everyone’s cup of tea, but it certainly was mine. With a magnificent soundtrack, stunning visuals and a compelling story, it ranks amongst the most memorable games I have played this year and probably will for a long time.

RiME is now available for PlayStation 4, Xbox One and Steam, with a Switch port confirmed for later this year. The soundtrack is available for purchase on Amazon and iTunes, and to stream on Spotify.

“Why doesn’t this review have a score?”