I stood on a rocky outcrop, just a few hours into Uncharted 4: A Thief’s End, and basked in the shimmering Italian sea that lay before me. Drake’s brother, Sam, tried cajoling me into entering the fortress we’d need to infiltrate. This is it, I thought. This is the game that will come up for years to come on the list of titles that define the PS4.

that have come before, this fourth entry focuses on the exploits of adventurer Nathan Drake. I won’t divulge much more, because this game’s narrative is one of its strongest assets, but the basic overview is that some figures from Drake’s past come back to haunt him – his estranged brother being the catalytic one of the bunch – and send him back to his plundering ways.

After a particularly powerful opening that does an excellent job of introducing the game’s mechanics, you’re right back into the swing of things. Controlling similarly to the instalments that have come prior, Uncharted 4 is frankly joyous to play.

Every single mechanic and action has been mapped to the Dualshock controller perfectly, so manoeuvring Drake around the picturesque locales is better than it’s ever been. But our hero’s arms and legs aren’t his only tools; the game introduces a nifty grappling hook which can be attached to clearly defined points, and swung from for an even grander sense of freedom. It isn’t just a matter of pressing a button and witnessing an animation; you’ll be flying through the air completely of your own accord, and need to gauge momentum quite literally on-the-fly to make sure you don’t plummet towards death.

The hook isn’t just used for exploring, however. During the game’s many firefights, you’ll be given the opportunity to swing around your foes to avoid gunfire – or, if you choose, land on them with a crushing blow. Combat this time around really shines, and disregards the simple cover-shooter mechanics that plagued the first Uncharted title, Drake’s Fortune. One moment Drake will be running and gunning, and the next he’ll swing off – or around – a cliff, without missing a beat. Thankfully, the game also allows you a hefty arsenal to combat your foes, and the guns have never felt more satisfying. The best comparison I could think to make would be with Max Payne 3; recoil packs a real punch, and the sounds generated by your shots echo off long into the distance.

If blistering skirmishes aren’t your ideal way to play, then stealth has also been vastly improved to make it just as viable of an option. Early on in the lengthy adventure, you’re taught the numerous new sneaking mechanics which will aid you in your silent combat. Enemies now have sight indicators which change colour depending on how visible you are, and can be marked with a quick click of the left stick while aiming at them. Long, thick shrubbery is also littered around combat zones, which can be used, a-la Assassin’s Creed, to sneak towards your prey, and take them out with a swift knock to the head. In fact, aside from a handful of necessary gunfights, the entire game can be played in this manner – if you desire to do so, that is.

“This is the game that will come up for years to come on the list of titles that define the PS4.”

What all of these mechanics build towards is a genuine sense of something lost from linear adventures: freedom. Uncharted 4 is a true celebration of the series and everything its achieved, and the numerous ways the game will allow you to play are evident of this. You’ve still got the expected cliff-climbing, but even this feels better with a much smoother movement system. I had feared the now iconic grappling hook would be unnatural in the context of Uncharted, but it drastically improves the already solid foundation of this action-adventure staple. 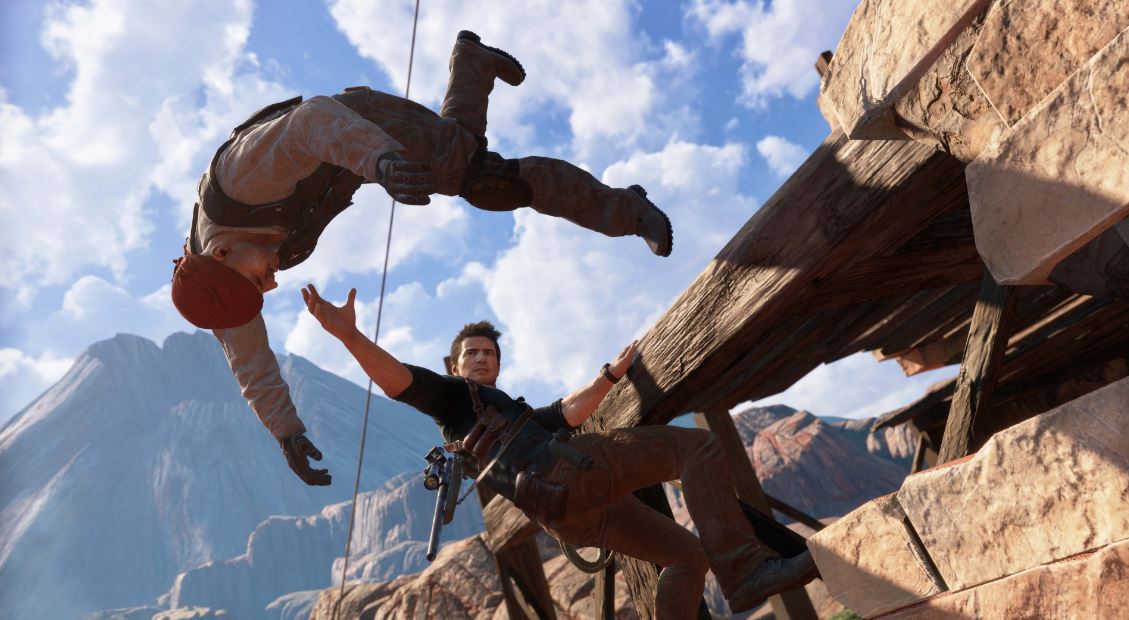 What developer Naughty Dog truly excel at this time around is a sense of believability to their worlds; an unparalleled attention to detail. Beams will bend and moan under the pressure of Drake swinging from them; peers will squint if a torch is beamed into their eyes; cupboards will splinter and shatter if used to hide from bullets for too long. It sounds like a handful of small features, but the game is literally brimming with them, which accumulates in an unbeatable experience. Even if you completely skip every cutscene the game has to offer, you’ll still find an immense amount of enjoyment from simply ploughing through this breathtaking journey.

I wouldn’t advise skipping them, though, because the cut-scenes of Uncharted 4 are some of the best I have ever seen in a game. Motion capture for all of the characters succeeds in portraying the emotion and nuances of a real human face, without falling into the eerie, uncanny valley area of other titles. Naughty Dog are famous for presenting realistic characters that tug at the heartstrings of every player, but the fact we’ve known these individuals for three games now makes the emotional beats all the more powerful. The game never really manages the brutally heart-wrenching tones of The Last of Us, but it grants players satisfaction nonetheless. Even the villain is memorable and justified, which stories of this scale sometimes struggle with. I won’t go any further than that, but just know that by the time the credits roll, you’ll be glad you stuck around to see it through to the end.

“…it’s hard to comprehend how stunning the vistas you’ll visit truly are.”

Thankfully, with everything going on, Uncharted 4 still refuses to hold your hand. The puzzles that litter the game’s 12 to 15-hour runtime are challenging enough to force some genuine thought, but very rarely interrupt the flow of the overall experience. Similarly, the wide, open areas of the game typically have several pathways to travel down, and inquisitive players are almost always rewarded for journeying off the beaten track. Whether it’s simply by discovering a treasure or something narratively focused, these alternative routes are worth checking out. Going for the more linear approach is also completely acceptable (and quicker), but you’ll be missing out on some titbits which really lend to the expansion of an already interesting story.

I haven’t even begun to touch on how stunningly beautiful Uncharted 4 is. It’s easily the best-looking game I’ve ever played, and pushes the Playstation 4 system to its absolute limits. Not a single location in the game is anything short of jaw-dropping. As mentioned, the locales of Italy you’ll visit are picturesque, but Madagascar, Scotland, and numerous tropical islands also provide a feast for the eyes. The game includes a photo mode to capture all of your best moments, and it’s as easily accessible by pressing in both stick together. From here, you can frame your shots, add filters, change the depth of field and so on, until your photograph is perfect. Of course, this feature can be disabled if it’s not to your liking, but the photo mode is a clear example of how proud Naughty Dog should be with their game; it’s hard to comprehend how stunning the vistas you’ll visit truly are. 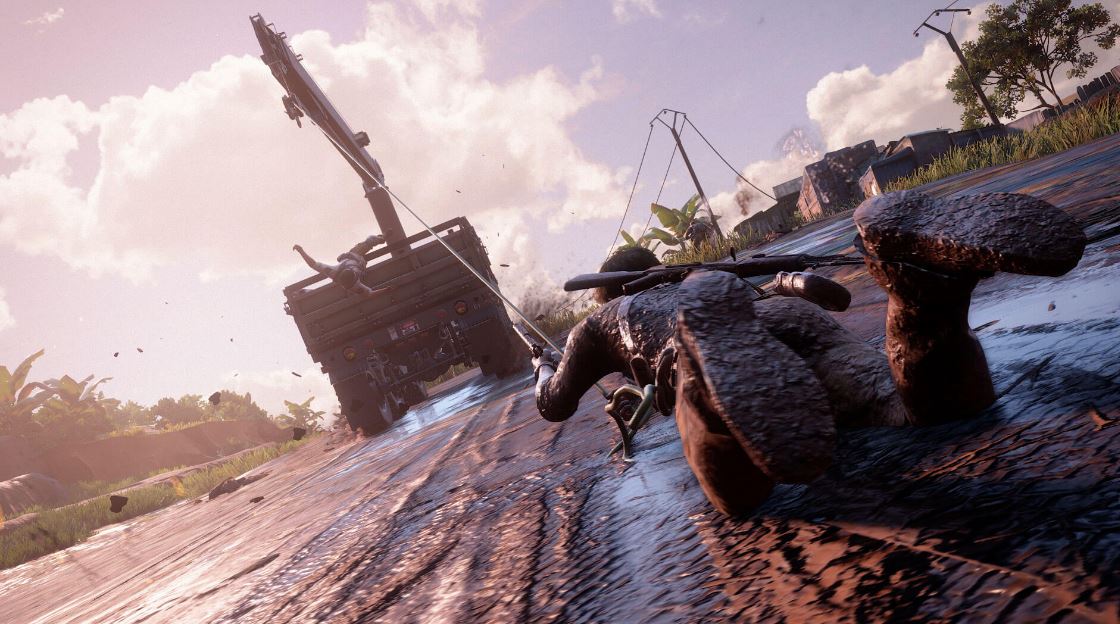 If had anything even slightly negative to say about Uncharted 4, it would be that the game sees a rather sudden and rather irritating difficulty spike towards its conclusion. I played through the whole thing on Hard, but found it to be satisfyingly challenging up to this point. By the time I had died for the 7th time on a single combat encounter, it became clear that something wasn’t quite right. It’s hard to penalise the game too much for this, though, especially when alternative difficulty options are available.

Also, and this might just be down to wanting to see how the game ended, the final chapters felt slightly padded. It’s not game-breaking by any means, but there’s only so many times you can hear a character say, “We need to find another way around,” before it becomes a little bit monotonous. As I said, it doesn’t ruin the experience, but it definitely feels like the closing chapters could have been cut down slightly to make the entire game a more consumable, concise package. Being the finale of a beloved series, though, you can forgive a little bit of self-indulgence.

Once the curtains close and the credits roll, you’ll be left with a certain sense of melancholy. Yes, it’s likely that this will be the final instalment in the Uncharted series, but Naughty Dog certainly know how to end on a high, and I cannot wait to see what they start working on next.