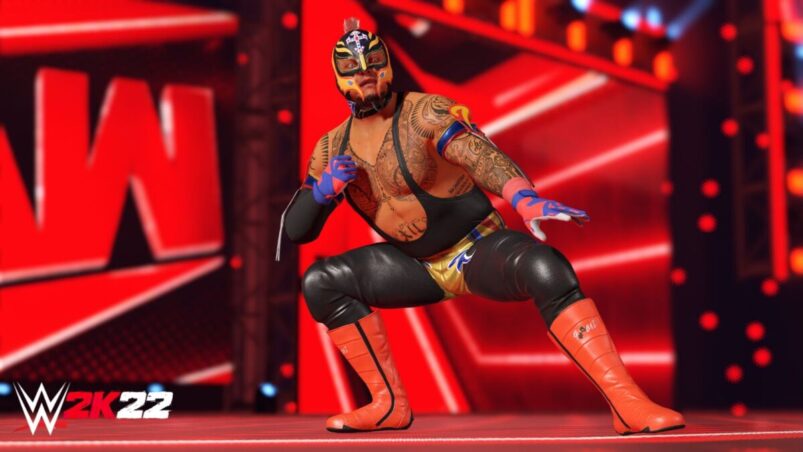 Following his reveal as the very first WWE 2K22 wrestler (and thanks to some rather leaky retailers), it should be no surprise to hear that Rey Mysterio has been officially announced as the cover star for the upcoming WWE 2K22.

Rey Mysterio will adorn the cover of the Standard and Deluxe editions of WWE 2K22, with players who purchase any edition other than the Standard Edition also unlocking the Starrcade ’96 Rey Mysterio Pack.

And the Deluxe Edition cover:

Mysterio on being announced as the cover star: “Representing the culture of lucha libre as the cover Superstar for WWE 2K22 is a moment of great pride for me. I’m looking forward to sharing the stories behind the big moments of my career with a dedicated community of players and connecting with WWE fans in a whole new way as they play through my 2K Showcase.”

On being told he was chosen as the cover star: “It was almost like an “ah” moment like, “really? This is going to happen?” I knew all about the hype and the work that was being put into it but it didn’t really hit me yet until just a couple of days ago when we were getting ready to make the announcement and announce the release date and that is when it really hit.

“It is something that is very special to me,” Mysterio continued, “Because of all the years I put into this business, a lot of the feedback that I get back from fans is, “”Rey you’re one of my favorite Superstars that I love to pick when I play WWE 2K””. So to hear that and now be on the cover, this is it. I think it is a great time for me too because I don’t know how many years I have left in this career. This timing was right on point and just put the cherry on top.”

Mysterio carries the torch from previous WWE 2K cover stars Roman Reigns and Becky Lynch, who shared the cover for the now rather infamous WWE 2K20. With a completely rebuilt engine and plenty of fan requested features finally coming, including Visual Concepts and 2K seem to be doing all the rights things — only time will tell.