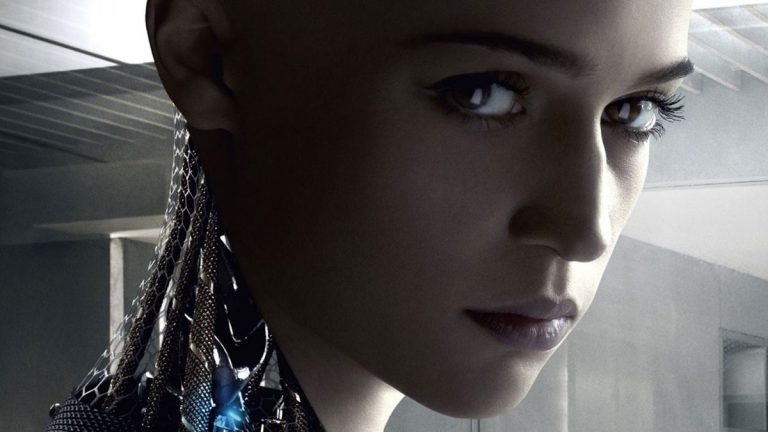 It seems like everyone’s got AI on their minds at the moment. With lines between science fiction and science fact getting ever blurrier (hover boards, tractor beams, hell, even fucking warp drive), the subjects of AI, self-awareness and what defines a living being and a synthetic one are becoming all the more pertinent. Stephen Hawking recently gave a stern warning of the risks of AI advancement and more and more fictitious explorations of the idea have started cropping up. Last year we had Her, Spike Jonze’s unusual love story about a man and his operating system and later this year District 9 director Neil Bloomkamp is giving us Chappie, a gritty, yet ostensibly heartwarming tale of a robot slowly learning to exist in the world around it.

For the time being though, we have Ex Machina. The title is taken from ‘Deus ex machina’, which is Latin for ‘act of God’, more or less. The removal of the word ‘God’ kind of gives you an idea of the film’s theme before it even begins, if a man creates a true, sentient form of intelligence, is that man a God? It’s ground well-trodden, Blade Runner, Ghost in the Shell, I, Robot, 2001 and countless others explore the idea but writer/director Alex Garland takes a direct, uncluttered approach to it. 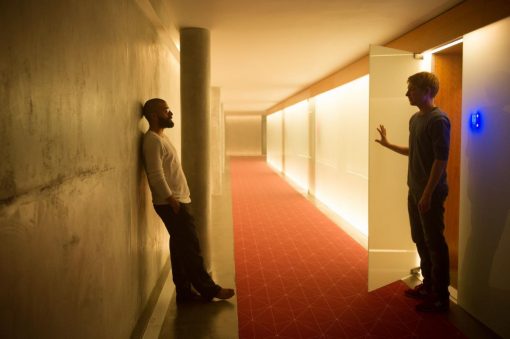 Domhnall Gleeson plays Caleb, a programmer for an exaggerated alternate Google called Bluebook who wins the chance to go and meet the founder and owner of the company in his secluded island home/research facility. Nathan, the man himself (Oscar Isaac, distractingly made up to look exactly like he did in Drive for no discernable reason) surprises Caleb with a research proposition, he has developed an AI in a humanoid frame and he wants to use Caleb as the human component of a kind of Turing test for the machine. Caleb excitedly agrees, unaware that there are far more angles to this scheme than he could have possibly surmised.

He meets Ava (Alicia Vikander) and is immediately overwhelmed by her complexity. She emotes, jokes, analyses and does just about everything else a human being does, but she lives in a glass room like an animal at a zoo and Caleb doesn’t question it, because however human she might appear, she’s still a machine. As the testing continues, Nathan’s mercurial, manipulative nature becomes more evident (as well as his alcoholism) and Ava’s insights sharpen into focus, “Don’t trust him, he lies.” she warns Caleb. This opens up a web of mistrust and disinformation, made all the more tense given that Caleb is trapped in an isolated environment with only Nathan, Ava and Nathan’s muted, silently suffering maid Kyoko (Sonya Mizuno) for company.

Alex Garland has always been a writer more interested in the exploration of big, broad ideas than anything else and that’s worked for and against him. His novel Coma was a brilliantly abstract study of how the mind unravels when it’s locked in stasis and his screenplays have been varied and interesting, even if they’ve often fallen apart just before the finish line, I’m thinking particularly of Sunshine and 28 Days Later here. Ex Machina is his strongest screenplay to date, it’s a beautiful script and that’s not something I say often. The dialogue ebbs and flows, the science is well-spaced, passionately relayed and characterisation is conveyed through action and inaction in equal measure. Ex Machina is a small story used to explore grander avenues and it does so masterfully. 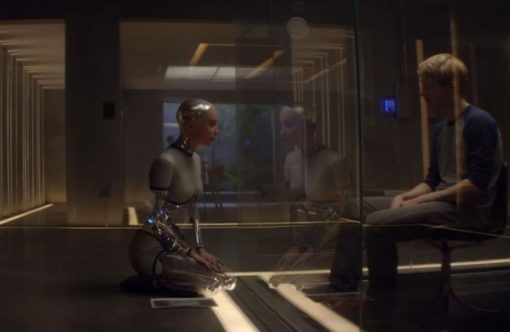 As the film progresses and things take a turn for the freakish, notions of free-will and whether any human is really capable of creating complex life without their personality bleeding into the process begin to surface. Nathan is a deeply damaged, dangerous man and some of the later revelations about his experiments will make your skin crawl. ‘Get Down Saturday Night’ will never sound the same to me again. Caleb, meanwhile, whilst having the best intentions, gradually becomes twisted and corrupted by the madness swirling around him, uncertain in his turbulent interactions with Nathan and his disconcerting attraction to Ava. She of course is the real star, through a series of carefully constructed dialogue scenes, she creates a tightening web of subtlety, intrigue and provocation, given that her gender and attractive appearance are entirely by design.

All this is presented in a gorgeous tableau of contrasts. Nathan’s demented doll factory is cold, angular and sparse, but it’s nestled in a gorgeous natural vista (all the exterior cinematography was done in and around Sognefjord in Norway). Geoff Barrow and Ben Salisbury provide a sparse but powerful score that claws at your with dark, harsh electronic drones and throbs. The cast are uniformly excellent, there is a real danger in films like this, so rooted in their ideas that the humanity can drain into the background and the characters can become little more than proxies, that isn’t so here. Caleb, Ava, Kyoko and Nathan are all victims in their own ways and their mistakes reveal the flaws that are so deeply ingrained in the concept of constructed intelligence. Alicia Vikander is absolutely stunning, providing the most haunting, alluring, poised rendition of the android fatale since Bridgette Helm in Metropolis. Things do begin to waiver in the third act, an issue that Garland clearly still struggles with but it’s only a minor stumble, not a full tilt and the issues lie with plausibility, rather than with narrative engagement. Ex Machina is genuinely brilliant, while other films skirt around the ideas at its core, Ex Machina locks you in a room with them for two hours and subjects you to every deep, dark, disturbing angle they have to offer.