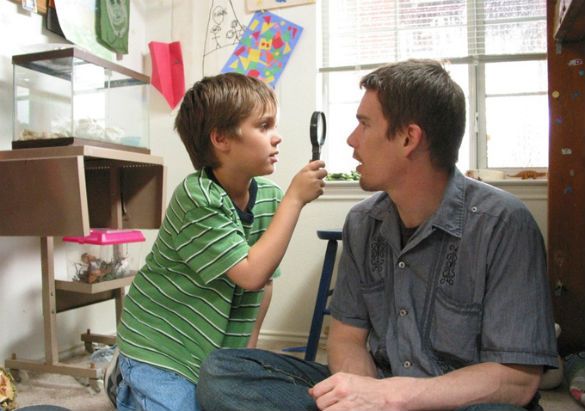 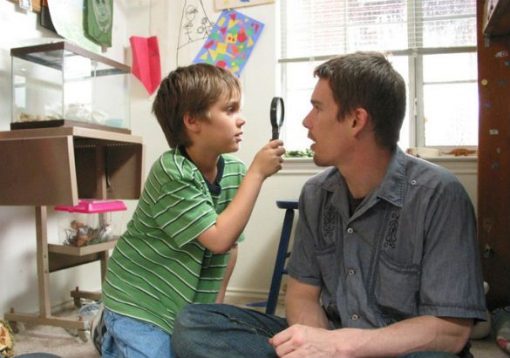 There’s no doubt by now that Richard Linklater can expertly use the concept of time so effectively throughout his films. In his most famous work in Before Sunrise, Before Sunset and Before Midnight (1995, 2004 and 2013 respectively), Linklater returns to the same characters with a 9 year gap between each film. 1993’s Dazed and Confused chronicles the coming-of-age of a group of teenagers over a single day as they prepare to leave high school. Whilst the title Boyhood may allude to a coming-of-age style film, none of this can even compare to the idea behind this latest release.

Boyhood, conceived as early as 2002, has taken 12 years to make. Setting aside a few days every year for filming, Linklater’s daring ambition and originality have produced what is perhaps one of the greatest films of the year. Boyhood follows the life of Mason (Ellar Coltrane) as he slowly grows from a boy into an adult, experiencing life within a carefully documented, authentic timeframe. Along with his struggling mother (Patricia Arquette), childish father (Ethan Hawke) and immature-come-sophisticated older sister Samantha (Lorelei Linklater – real life daughter of Linklater), life – and more specifically, time – happens to this family.

The first time we see Mason he’s 6, lying on the grass, and watching the clouds silently as they drift overhead. In comparison to his sister, he’s quiet and self-contained; almost looking at the world from the outside rather than living in it. Having recently divorced, Mum Olivia is struggling to make ends meet, whilst Dad Mason Sr. is caring but unreliable, having spent a lot of time away in Alaska. Deciding to go back to college to finish her degree, Mum moves the family to Houston. What follows for the family are insightful chapters as each character manoeuvres their way through love, marriage, divorce, school and work. 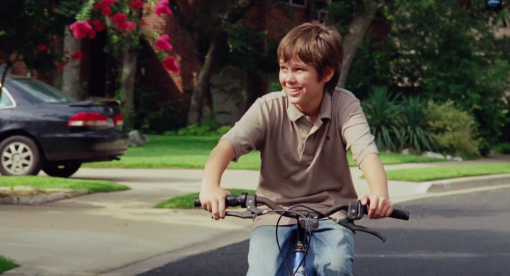 Boyhood largely contains no narrative plot, per se, despite obviously following a linear timeline throughout. Instead, the film relies on the constant twists and turns that see friends and lovers come and go. Linklater’s consistent cultural awareness over the period of filming is shown throughout the subtle developments and change– Gameboys become Xboxes, iPods become iPhones, Bush becomes Obama. Linklater’s precision extends into Boyhood’s soundtrack too; Coldplay switches to Gnarls Barkley, then from Vampire Weekend to Arcade Fire, simultaneously providing a content yet melancholic accompaniment up until the closing moments. There’s even a slight nod to 9/11 and the war in Iraq through one of Olivia’s husbands who has just returned home from the fighting. It’s moments like these that beautifully capture the past – snapshots suspended in time, almost – and highlight Linklater’s artistic anticipation in the moment to provide a real sense of longing and sentimentalism in the future.

There’s a scene about 30 minutes from the start of the movie where Mason Sr. takes his children to a bowling alley. As Mason Jr. gutters another ball and complains sulkily about the lack of bumpers, his father replies “You don’t want the bumpers, life doesn’t give you bumpers.” Although at the time this seems more appropriate to his son, the remark comes back round for Dad as he lets go of his dreams (his 70s muscle car is swapped for a people carrier) for a more steady and controlled lifestyle. By this, it’s hard to argue against the fact that this film could well have been called ‘Manhood’ or ‘Girlhood’, so much is the real life change in the other characters too. Perhaps you could label Boyhood a ‘coming-of-age’ film, but in reality, there’s a lot more to it than that. Age is essentially a character throughout, yet it is the focus on our ever changing perspective as we grow older that Linklater chooses to draw attention to.

Whilst it’s likely that the majority of viewers have shared similar experiences to Mason throughout their respective childhoods, what makes Boyhood so warming and wonderful is how people can attach themselves to at least one of these family snapshots over the course of the film. There’s a real sense of intimacy and connection throughout, as we watch a whole family grow up and find their path in life before our eyes.

Boyhood has definite irregularities and distinctions that make the film feel special, yet Linklater has seamlessly arranged these particular aspects to make the specific seem general, and the individual seem universal. Never before has a film felt so personal and nostalgic, yet appealing en masse at the very same time. All at once, everyone is so different and much the same. Boyhood really is magnificent.