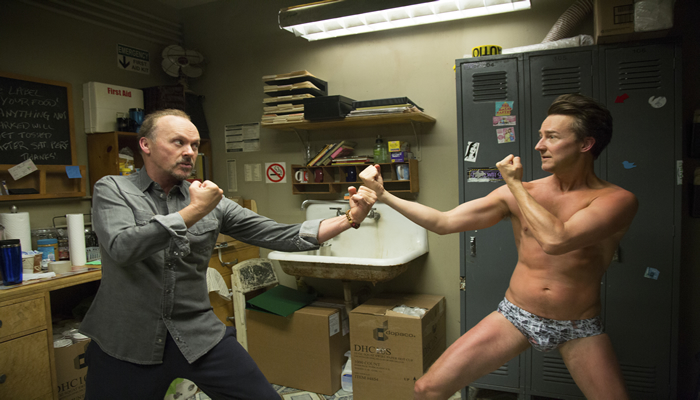 Usually, in preparation for a film coming out with a title like ‘Birdman’, I would have mined the deep, dark depths of the chasm of winged mammal related puns as a humorous and cheap method of compelling you to keep reading the rest of the article. However, Birdman is a film that as soon as the end credits ran I wanted to run to the rooftops and shout to the perplexed pedestrians below, ‘Go and see Birdman!’ in attempts of embodying the spirit of famous American Patriot, Paul Revere, who was falsely reported as declaring the well-known phrase, ‘The British Are Coming!’

It’s been a long while since I’ve gone to the cinema to see a film that I didn’t previously know a fair bit about. Whether it would simply be the plot, the casting, the creative team, some juicy behind the scene story or even just reviews of said movie. I haven’t recently stepped onto that sticky, popcorn filled floor of a movie theatre with a completely blank slate and while that may not be completely the case with Alejandro González Iñárritu’s Birdman (having previously seen the trailer and been aware of the talk of it’s rave reviews), I still didn’t know what to expect. I really knew nothing and in hindsight it was the best thing I could have ever done. Nothing could have prepared me for the enchanting and wall-hitting impact of Birdman’s astounding and magical thrill-ride.

Birdman tells the story of washed-up Hollywood superstar turned struggling Broadway actor, Riggan Thomson, as he attempts to create and maintain a successful stage play on the verge of its opening night in hopes that it will reignite his career as a serious artist. As the countdown to that dreaded and hopeful opening night ticks away, Riggan battles demons both inside and out. Frantically trying to keep his personal and professional life from crumbling before his very eyes as he begins to questions his very existence in this world.

Birdman takes a ruthless and unguarded look at celebrity culture, one of the biggest and most depressing pitfalls of my generation. Its pins its eye on the cost of fame and artistry in this continuing digital and disposal age. As voiced by Lindsay Duncan’s hard nosed and brutal newspaper critic Tabitha, ‘You’re not an actor, you’re a celebrity’. 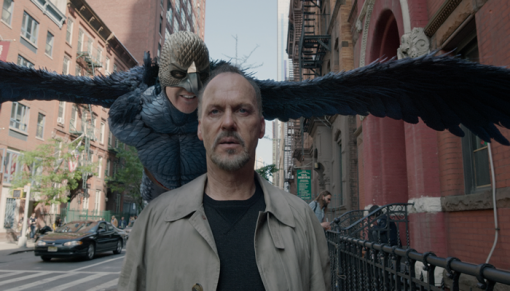 This is a film about characters. The characters we all play in our everyday lives. The façade we put on for our friends, colleagues and superiors to protect our sensitive and fragile interiors. To quote William Shakespeare, ‘All the world’s a stage, and all the men and women are merely players’. Birdman suggests that we are all ‘actors’ in our lives, creating a smokescreen of confidence and security within ourselves. The so-called ‘characters’, in Birdman are played to near perfection by a truly impressive ensemble cast. Michael Keaton returns in big and obvious style to take front billing as Riggan Thomson and he is supported by the likes of Zach Galifianakis, Edward Norton, Andrea Riseborough, Amy Ryan, Emma Stone, and Naomi Watts. The performances of these actors were masterfully weaved together by Iñárritu. The cast were all like different instrumental incarnations of a jazz band, each with their own offbeat and wacky performance but all coming together in harmony to create a perfect and memorable veneer.

It’s instantly understandable why the director decided to shoot Birdman, a film based against the backdrop of a New York theatre house, the way he did. The film was made up of a number of extreme long takes all stitched together to generate the appearance that the whole thing (which runs for 119 minutes) is just one massive shot. Now, you may think this sounds ridiculous, unachievable and over ambitious and I would have been inclined to have agreed with you. However, somehow it all works, I still have yet to work out how Iñárritu was able to successfully pull it off with such grace I was watching raw, unfiltered, unedited performances much I like get when I’m watching a play at the theatre but with all the close up intimacy of a film. When the first scene started it felt like a prolonged introductory scene and that this long shot was going to cut at any minute but it never did, it just kept going.

There is so much talent on display in this film, from Keaton’s bonkers and wonderfully contained leading performance to Iñárritu’s insane level of ingenuity and flair for visual storytelling. Even the fantastic musical score or insightful, whip crack screenplay on offer but surprisingly there is one person whose talent is put front and centre before everyone else’s is the Steadi-Cam Operator. The camera work in this film is utterly flawless. It was almost as though the camera did not exist in the current dimensional space. It was not an object made of matter or particles. I was entering this world through some bizarre, parapsychological vortex, the camera and audience not being bound by the physical constraints of buildings and people. We moved through walls, through characters. It was magical and enlivening.

Perhaps it will one day come to pass that Birdman will be revealed to be nothing more than a sham. Perhaps on repeated viewings cracks will begin to show on Birdman and the charade will be over. I hope not, I hope with every rewatch it continues to stimulate my senses and gives me that magical feeling I got on New Years Day. Yes, it maybe is twenty minutes too long and lacks some subtlety but nonetheless, 2015 is off to a flying start!