Chelsie recommends her favourites from the many, many (many) diverse books that she has read and enjoyed. 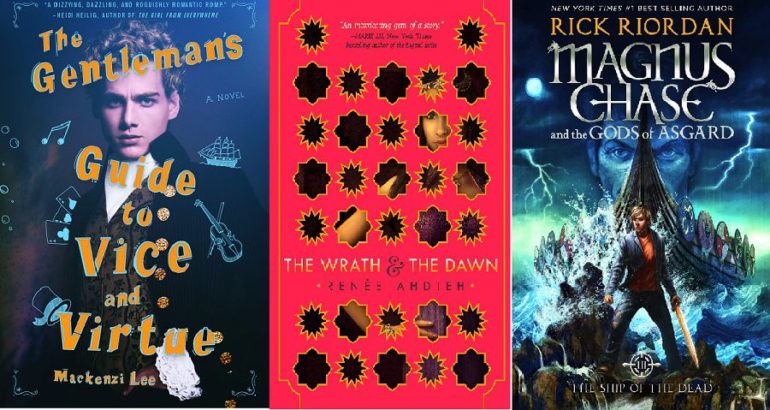 As someone who is part of the LGBT community, I strive to read as many diverse books as I can. I believe that in a world so rich with culture our books should represent the diversity within people, especially within our children’s and young adult novels. Books can shape a reader’s mind, can give someone the inspiration to do whatever they want to do.

Over the years I have sought out diverse books. Here are some of my favourite novels showcasing different sexualities, races, genders, and disabilities.

If anyone knows me, I’m a huge lover of this series. Captive Prince is an adult series that follows Prince Damen, who is betrayed by his brother and is sent as a slave to their enemy’s kingdom. There, he meets their crown prince, Laurent, who is as vicious as he is beautiful. Damen must find a way home and hide his identity from Prince Laurent because Damen killed Laurent’s brother years before.

For those who have a taste for forbidden love, dark themes and royalty, I highly recommend this book. C.S. Pacat ignores the restrictions of today’s attitude towards the LGBT community. Homosexuality is front and centre in this series with no homophobia in sight, though not all of it is happy. With rich and deep characters like Damen and Laurent, readers will find themselves gripped in the tension, biting their nails at the plot twists and fawning over the romance that blooms throughout the series.

I will warn that the book deals with some mature themes and sensitive readers may not enjoy the subject matters that appear in all three books.

Warcoss is a young adult novel set in a world where technology is part of everyone’s everyday life. Emika Chen is a hacker and bounty hunter who is hired by Hideo Tanaka, the creator of Warcross, a virtual reality game. A mystery figure is hacking the games and Hideo wants Emika to find that someone and bring them down. Thrust into a world of wealth, love, and games, Emika must uncover who is hacking Warcoss and soon – before the international games start.

Marie Lu has been a favourite author of mine for eight years, starting with her first novel series, Legend. But Warcoss is the book with a large cast of characters and culture. Set in Tokyo, it’s alive with colour and technology. With a female Asian protagonist at the forefront, who is intelligent, funny, and determined, she leads the plot with the reader deeply engaged and ready to uncover the mystery.

3. The Gentleman’s Guide to Vice and Virtue by Mackenzie Lee

Henry ‘Monty’ Montague loves nothing more than the pleasures of life, but his disapproving father wants him to mature or lose the family in heritance. With his sister, Felicity, and best friend, Percy, Monty journeys on a Grand Tour of Europe, trying to enjoy what time he has left before life becomes boring under his father’s rein. However, Monty gets into a heap of trouble, more than he thought possible, which could possibly get him and his companions killed. Oh yeah, he’s also struggling with a crush he has on his friend, Percy, just to make things more complicated.

I won’t lie, I fell in love with this book on page one. Monty, despite his selfishness, is very easy to like due to his vibrancy and colourful personality. Able to get himself in trouble, the book is quick paced and laugh out loud funny. Reading at midnight is not advised because you won’t be able to stop, and you’ll be very tired for work the next morning.

4. Magnus Chase and the Gods of Asgard series by Rick Riordan

A middle grade book this time around and by my all-time favourite author, Rick Riordan. You may have already heard of his previous series, Percy Jackson & the Olympians, which I adore so much, but it is his later series that I must praise for his diversity. While Percy Jackson does have some representation with Percy’s ADHD and dyslexia, it is outshined by how much Riordan progresses as a writer with Magnus Chase. (Do I need to say more than he won the Stonewall Prize for Hammer of Thor, the second book in the series?)

Magnus is a homeless teenager who dies. Once dead, he discovers the world of Norse mythology and has now been tasked with stopping doomsday. It is filled with witty and clever lines that will make you laugh out loud, soft tender moments that make you tear up, and loveable characters that will stay with you forever.

Riordan isn’t afraid to represent all walks of life and explore how being thrust into a Norse adventure challenges their character. Some characters include a powerful, deaf-mute, wizard called Hearthstone, a Muslim Valkyrie called Samirah al-Abbas, and Alex Fierro, a genderfluid wisecracker, who is also a shapeshifter.

5. The Wrath and the Dawn by Renee Ahdieh

A reimagining of 1001 Arabian Nights? Yes please. What to even say about this book? Just read it. Okay, more about it first and then read it?

The Wrath and the Dawn follows Shahrzad, a girl that vows to kill the boy-king, Khalid, who murdered her best friend. Each night, Khalid marries a girl. Each morning, that girl is killed. Shahzard volunteers to be his bride, planning her revenge to make sure it is Khalid who is dead by morning and not her. She delays her death by weaving stories every night, but not finishing them by the time the sun comes up. Wrapped up in her stories, Khalid allows Shahrzad to live, if only to finish telling them.

But what happens when beauty falls for the beast?

It is the classic story of enemy turned lover, and it’s one that I utterly adore. The language in this book is so rich and deep, it is like reading a legendary tale from a thousand years ago. Shahrzad is a fantastic character that carries the story with her own stories with grace, determination, and wisdom. Khalid is complex and you desperately want to uncover the reason why he kills his brides each morning, and if he will finally do the same to Shahrzad.

6. Aristotle and Dante Discover the Secrets of the Universe by Benjamin Alire Saenz

As you can see by my list so far, I’m a sucker for fantasy stories with high adventure. Though, a change of pace comes from this book. Aristotle and Dante Discover the Secrets of the Universe is set in Mexico during the 80s and follows a teenager called Aristotle. When my friend recommended this book to me, I was hesitant. A lot of the non-fantasy LGBT books are coming out stories that deal with how ‘gay’ the character is and the struggles of being gay. While those books are still wonderful, I had grown tired of the same stories being retold.

I was wrong about Aristotle and Dante.

Aristotle is more than his sexuality. He’s a boy that has many layers to his story; a brother that is in prison, a father he can’t connect to, a boy who confuses him. His story follows his struggles with his everyday life, but he’s not alone in his story. He makes a friend, Dante, who is the sunshine that keeps the book from being too bleak. And with the beautiful, poetic language that Saenz uses, it’s easy to fall in love with his work.

Warning: This book will make you cry.

READ NEXT: 15 Best Horror Books You Should Read (If You Dare)