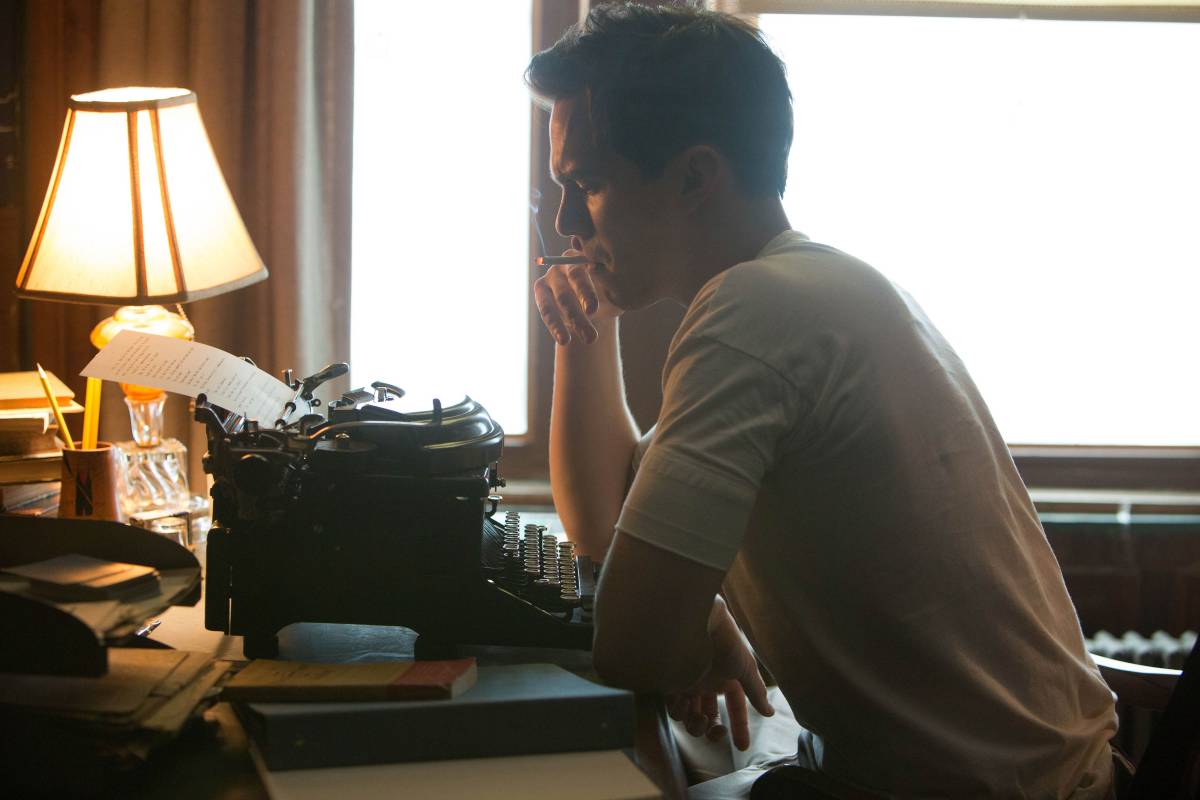 J.D. Salinger is one of the most interesting people of our times and even in this short glimpse into his life, Rebel in the Rye could have gone deeper into life of the literary recluse.

by Kenneth Slawenski, the film delves into the events that shaped Salinger’s life as a young adult.

We meet Salinger (Hoult) as he writes a letter to his mentor and Columbia instructor Whit Burnett in 1946 before the film flashes back to 1936. Not exactly sure of what he wants to do with his life other than not follow his father, Sol (Garber) into the bacon industry, the young Salinger makes the decision to go back to school and become a writer. Kicked out of New York University, Salinger enrolls in the aforementioned Columbia and is taught by Burnett. Burnett would play a mentor to the writer for a long time to come, even publishing his first short story, “The Young Folks,” in the magazine he edited, Story. While Sol isn’t a fan of his son wanting to be a writer, his wife, Miriam (Davis), certainly supports him.

He meets socialite Oona O’Neill (Deutch) at the historic Stork Club and even though she said she’d wait for him after the war, the comedy writer’s daughter ended up getting married to the legendary Charlie Chaplin. How about that for bad luck?

Come 1942, the US is off to war and so is Salinger, where he finds himself invading the beaches of Normandy on D-Day. If not for missing their target landing by 1,000 feet, it’s possible that Salinger would have died during the landing without ever having published his seminal novel. Writing the story of Holden Caulfield, which would later become The Catcher in the Rye, is what got him through the war while the war also changed Salinger’s views. He comes back with PTSD, married to Sylvia Welter, and their marriage gets annulled when he suspects her of being a Nazi.

One of the funniest moments in the film came when Salinger asked Little, Brown, and Company to not send him any reviews of The Catcher in the Rye. In classic comedic fashion, the very next scene shows Salinger seen reading the reviews at home.

One gets that feeling through watching that Salinger decided to take himself out of the spotlight because he didn’t want to deal with the Holden fanatics, some of which may have been deranged–we know one thought he was Holden and ended up killing John Lennon. While Salinger did keep writing, very few things were published after Catcher came out in 1951. Outside of his anthology book, Nine Stories, in 1953, he never really published anything again even as he spent the rest of his life writing. The film briefly touches on his marriage to Claire Douglas (Boynton) and should have expanded on this.

One of the first glimpses offered into the life of the reclusive author came in the 2013 documentary, Salinger. The documentary was released three years after his death and a heavily-researched companion book was released shortly thereafter. Another glimpse came through the 2016 coming-of-age drama, Coming Through the Rye, with Chris Cooper playing the famed writer during the late 1960s. Even with a running time of 106 minutes, the film feels a bit on the short side.

Following its world premiere at the 2017 Sundance Film Festival, IFC Films acquired the distribution rights and opened Rebel in the Rye in theaters with a limited release on September 8, 2017.