An interesting but rather flawed take on the point-and-click adventure game. 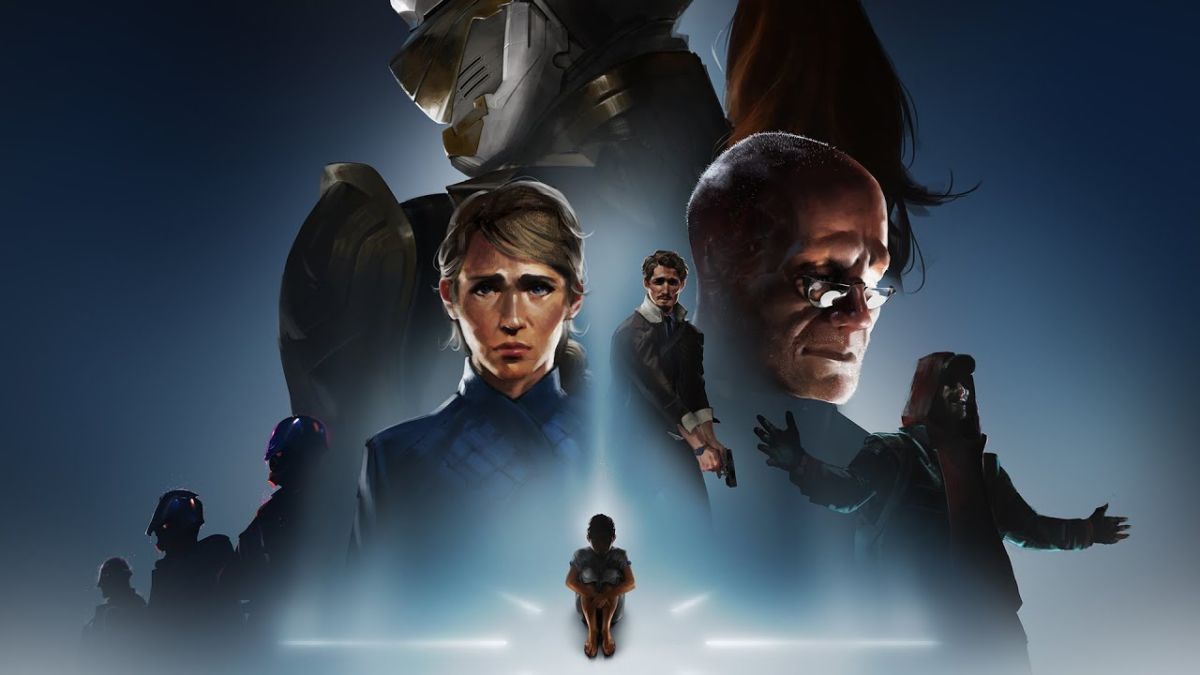 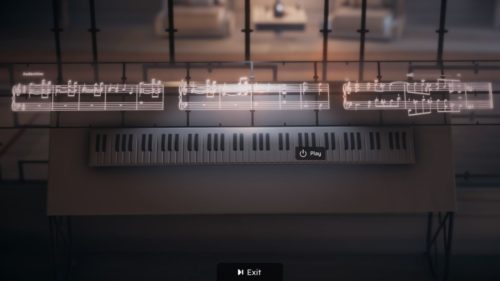 Rain of Reflections starts, fittingly enough, on a rainy night as a woman, Wil, contemplates betraying everything she has done up until this point in her life. Wil is a scientist who is currently working with her father to find a cure for the infertility plague which is affecting humanity. She does this by experimenting on the last naturally born human child. As the game opens, Wil has been in contact with a group of rebels who are resisting the totalitarian regime and their cyborgs, to free the child and, presumably, clear her conscience. It is every bit as Children of Men meets Blade Runner as it sounds.

For as derivative as the story is on paper, I found myself liking the world and its design quite a lot. It’s a world that’s equally steeped in Scandinavian minimalism and the most garish turn-of-the-century American art styles. What’s more, it’s coherent through the game in a way that you seldom see, even in bigger budget titles. I immediately found myself wanting to learn more about this world and ended up reading every little email or lore I could get my grubby little hands on. 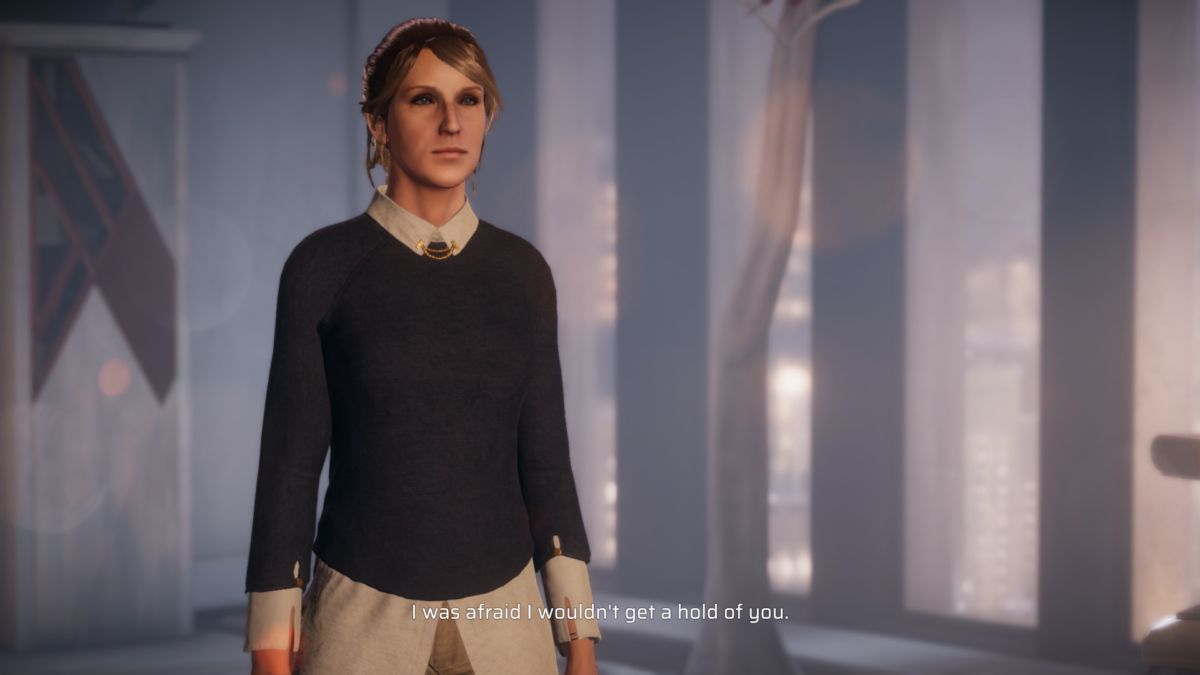 Mechanically, Rain of Reflections is divided into three parts: Point and click exploring, stealth/combat, and hacking. While exploring the world, there are points of interest you can click on to learn more about a book on your bed or what kind of music Wil likes to play or to progress through the story. It is somewhat simplistic, but does the job well enough. Once in a while, you will engage in dialogue with other characters and the outcome of these conversations could potentially alter the path you have to take. As you don’t have any RPG stats to take into account, dialogue is all about reading the situation and picking the right option.

The first one of these dialogues you encounter is with your overprotective mother. Afraid of an attack in the city, she is sending a squad of cyborg cops to escort you to safety. During the conversation, you can either be abrasive towards your mother and assert your independence or play along with her concern and not be too confrontational about it. After having played countless story-driven games where being assertive and independent is rarely punished in any way, it is refreshing to see a more natural take in Rain of Reflections. As anyone who has tried to sneak out to drink beer as a minor can attest, being short and snarky with your mom generally gets you nowhere. It is indicative of the smart writing throughout Rain of Reflections and most characters surprised me by how naturally they responded to different dialogue options, unlike most games. 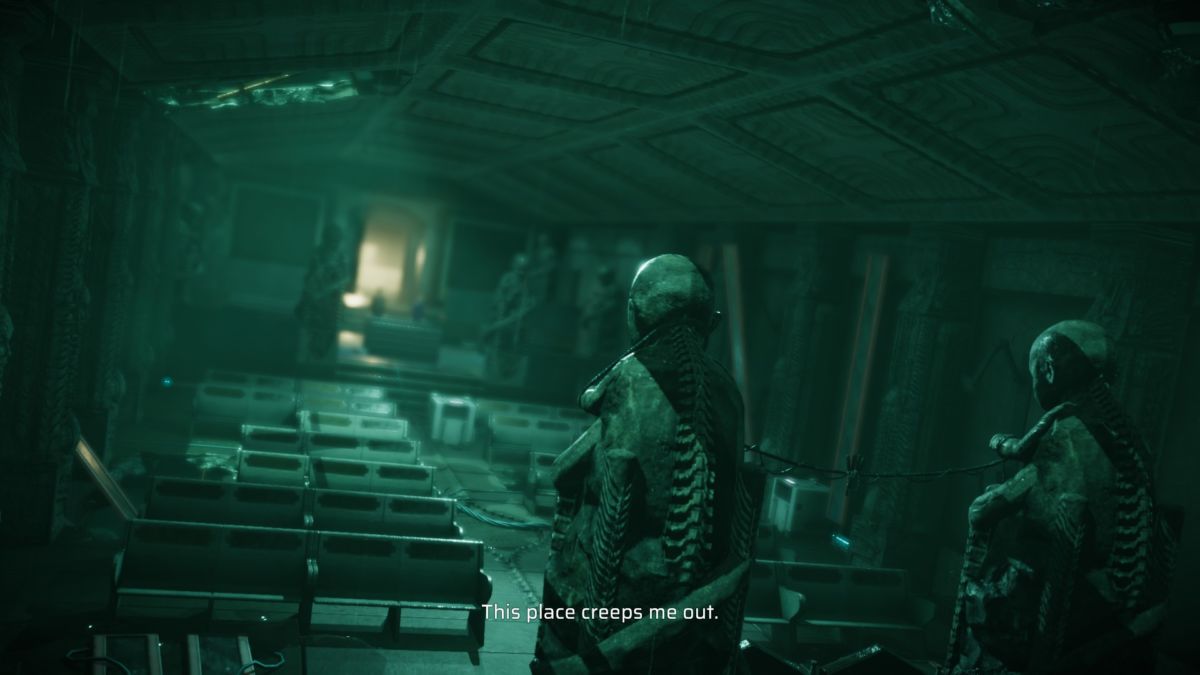 While the writing is good, the same can’t be said for the voice acting. I struggled to find anything resembling human emotion in the way characters talked to each other. Rain of Reflections is full of stiff, stilted and wooden performances. For a game that is hitching a lot of its appeal upon the story, this is a serious flaw. It is hard to take characters, or the world, seriously when everyone comes off as emotionally dead as the drugged up people in the Christian Bale vehicle Equilibrium.

I also encountered a strange sort of plot hole (or a bug ?) that never got explained. Throughout most of the mid-game, you are together with a friend who’ll help you enter the facility where the kid is kept. At some point, he just disappeared. Narratively, it makes some sense for you doing the last stretch alone, but it was very jarring to have him unceremoniously cut out from the game. For all I know, he is still on a rainy rooftop, crouching next to a patrol of cyborgs, for no apparent reason. 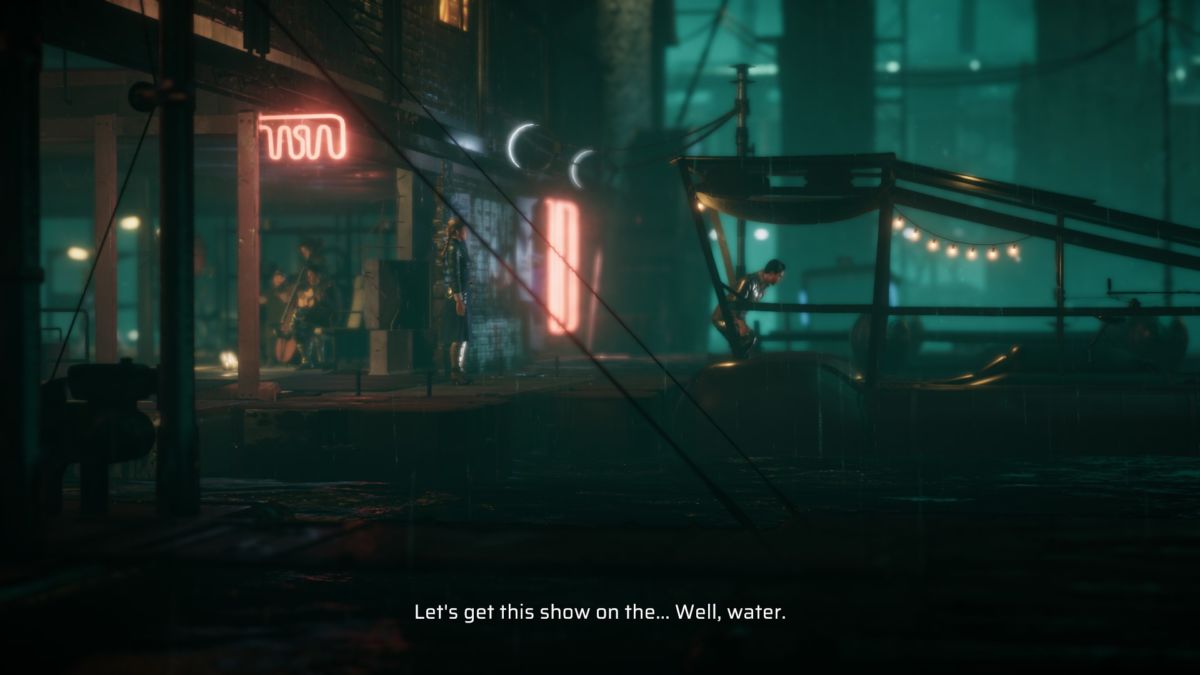 Luckily, Rain of Reflections redeems itself in other parts of the game. The combat and stealth mechanics are surprisingly well done. When you encounter a patrol of enemies, you enter a stealth section where the goal is usually to reach the other end of a room. This plays out in a turn-based fashion and you can do two actions each turn. It works similarly to how XCOM handles its turn-based gameplay.

The best tool Wil has during these sections is her stealth cloak. Turning it on will render you invisible until the start of your next turn. Enemies can still hear you though, and turning it on will cost you a battery. Batteries are a resource you can harvest from power stations or service robots. There are a few sections of the game which relies upon the cloak, but I never came anywhere close to running out. It is interesting but perhaps a tad simplistic in the confrontations that are in the game. 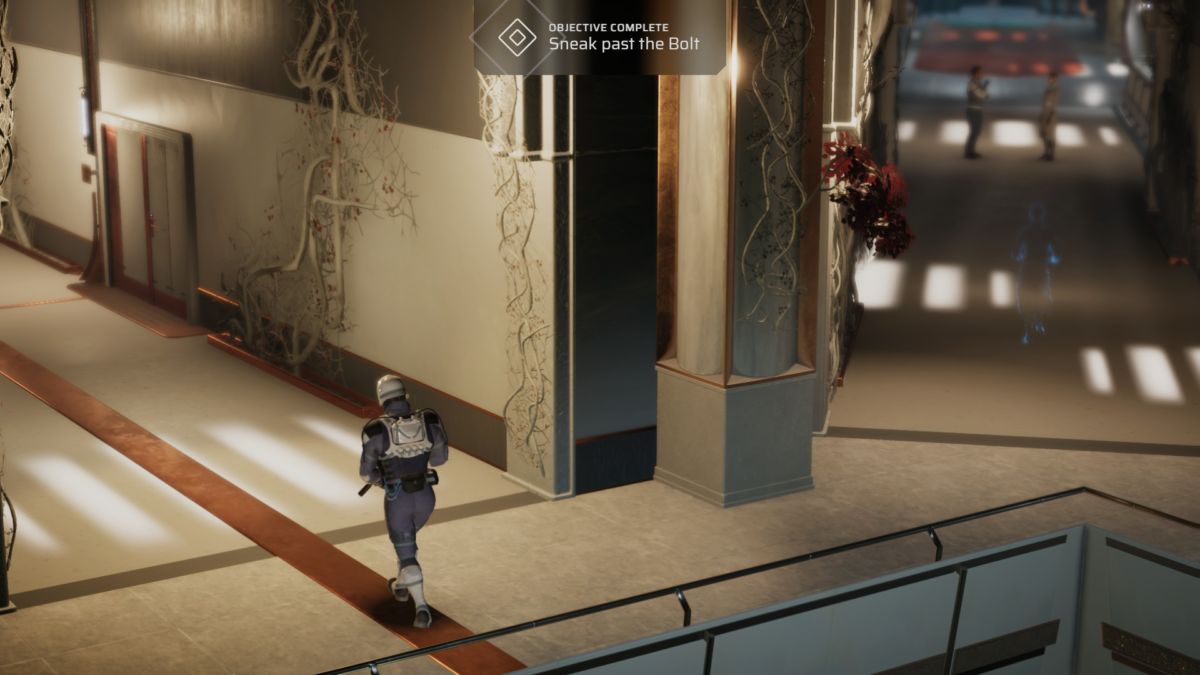 If you botch the stealth phase, you enter a turn-based combat mode which again plays a lot like XCOM. Unlike many other games though, combat in Rain of Reflections is not solely about hurting the enemy’s health. The goal is to make the enemy lose motivation in the fight and run away. This means every act of aggression you take can do ‘damage’, including destroying cover, flanking and even talking to them can harm their motivation to keep on fighting.

It is a rather fun system and the weapons sound and feels scary as they pulverize both cover and machinery alike. I would have liked to see this combat explored further and expanded upon. Unfortunately, however, the game’s length bars any such developments. Even whiffing every single stealth section, there are only a handful of combat encounters throughout the whole game. It bodes well for the next game, I suppose. 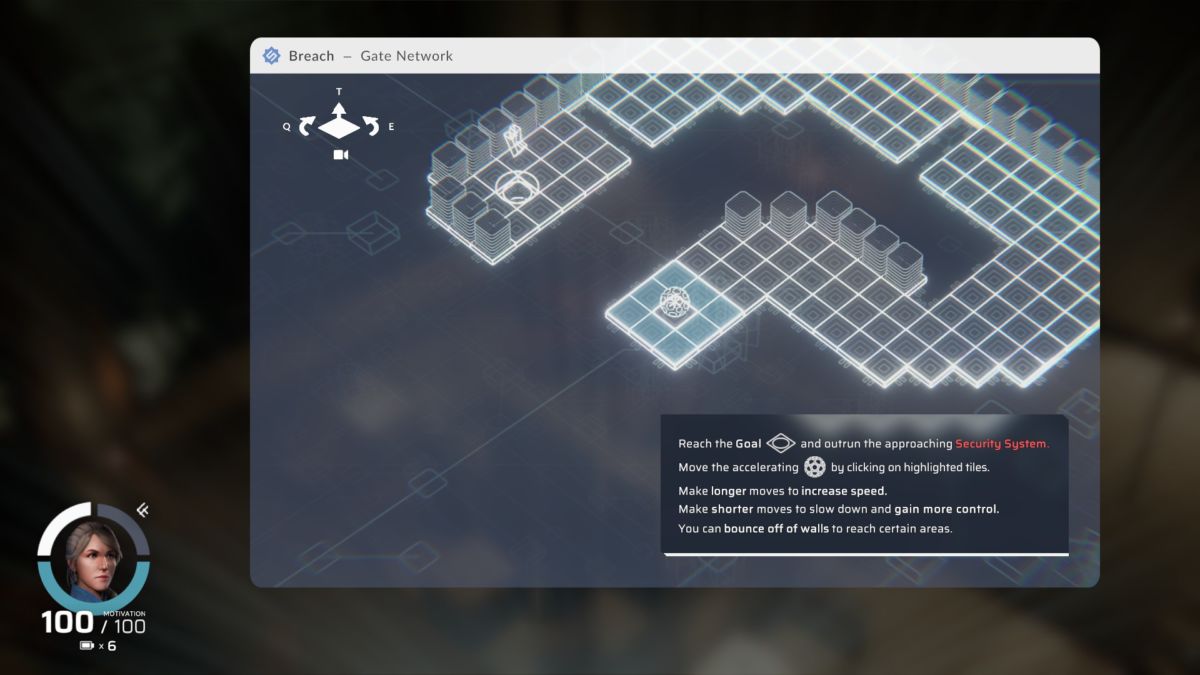 While the combat and stealth are interesting, the best part of Rain of Reflections’ gameplay is undoubtedly the hacking. As you move through the world, you will discover everything from computer terminals, robots and doors to hack into. When you do this, you are taken to a very well designed node grid, with each node representing a different kind of minigame. One has you matching a 3D shape into a hole. Another has you moving a stack of rings over a grid, each ring represents a move and the goal is to find a sound signal’s origin before you run out of moves.

The best one though is the ball game, and I feel that Lionbite Games could probably expand upon it and release it as a standalone game if they wanted to. It tasks you with moving a ball through a square grid into a hole. Sounds easy at first, but you soon realize that each turn you move the ball, it builds up momentum, which makes it harder to control. 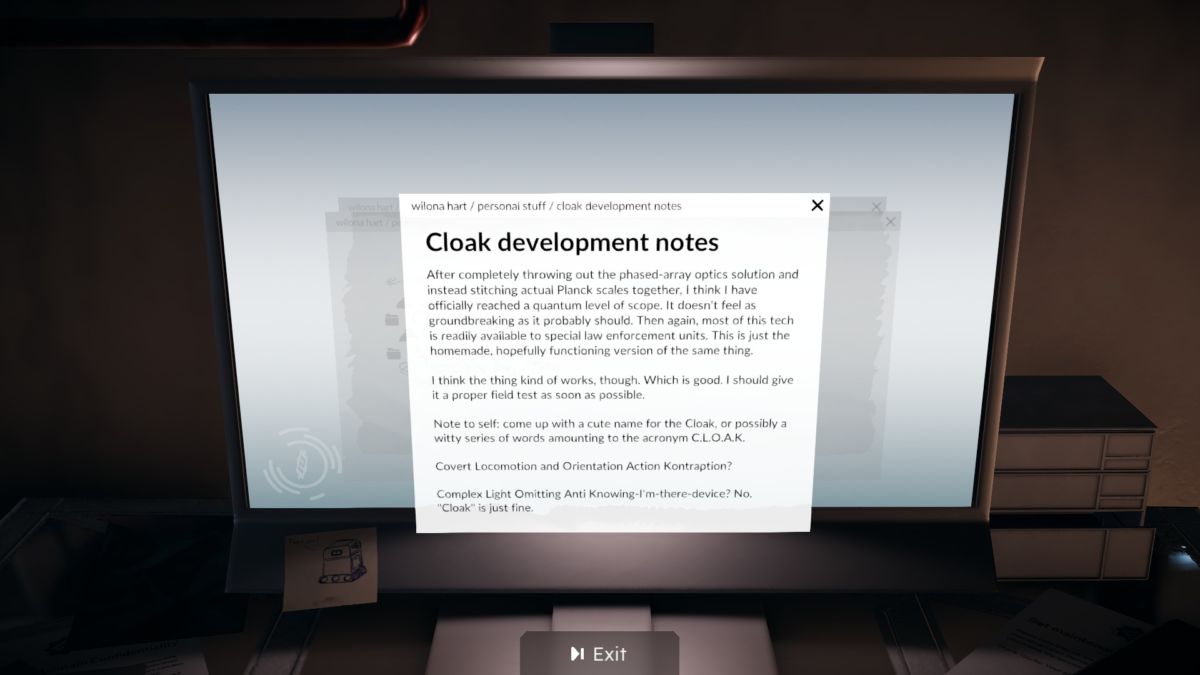 At the end of the game, you have to build momentum in the right places to bounce the ball off walls or fly across gaps while at the same time plan to slow down enough to take the right turn. It can be amazingly fun and has to be the best hacking minigame I have laid my hands on. Even after finishing the game I wanted to go back and solve more of those puzzles. Similarly to the combat, just as the hacking is starting to get challenging, the game ends.

None of the parts which make up Rain of Reflections outstay their welcome and feel fresh throughout the entirety of the playthrough. However, a playthrough is so short that they don’t have time to breathe or develop in any significant way, either. As a parent, it is nice to be able to reach the finish point of a game in a single sitting. However, Rain of Reflections might be a little too short. After playing through the game a couple of times to see different paths, my clock barely scratches 8 hours. As mentioned, a short playthrough is not necessarily a bad thing if what we get is well crafted and polished enough. Sadly, Rain of Reflections has some major drawbacks that feel especially egregious in an adventure game which focuses on telling a story.

Throughout my playthroughs of Rain of Reflections, I kept coming back to the same thought: Lionbite Games have put a lot of great ideas and systems into this game, but as a player, we never have the opportunity to fully explore or engage with them. Just as you get your head around them and things get interesting, it’s time for the credits. Had the mechanics been given an opportunity to become fully fleshed out and the voice acting been imbued with just a tad more emotion than a lamppost, Rain of Reflections could have been a tremendous game. As it stands now, the best parts of the game aren’t quite developed or good enough to compensate for the truly terrible voice acting.

Verdict
Rain of Reflections: Chapter 1 is a competent point and click adventure with fun ideas and an interesting world. Unfortunately, the game’s short length and poor voice acting prevent it from becoming great.
7