Look past the lack of mouse support and you’ll find a worthy shmup, if you live long enough that is. 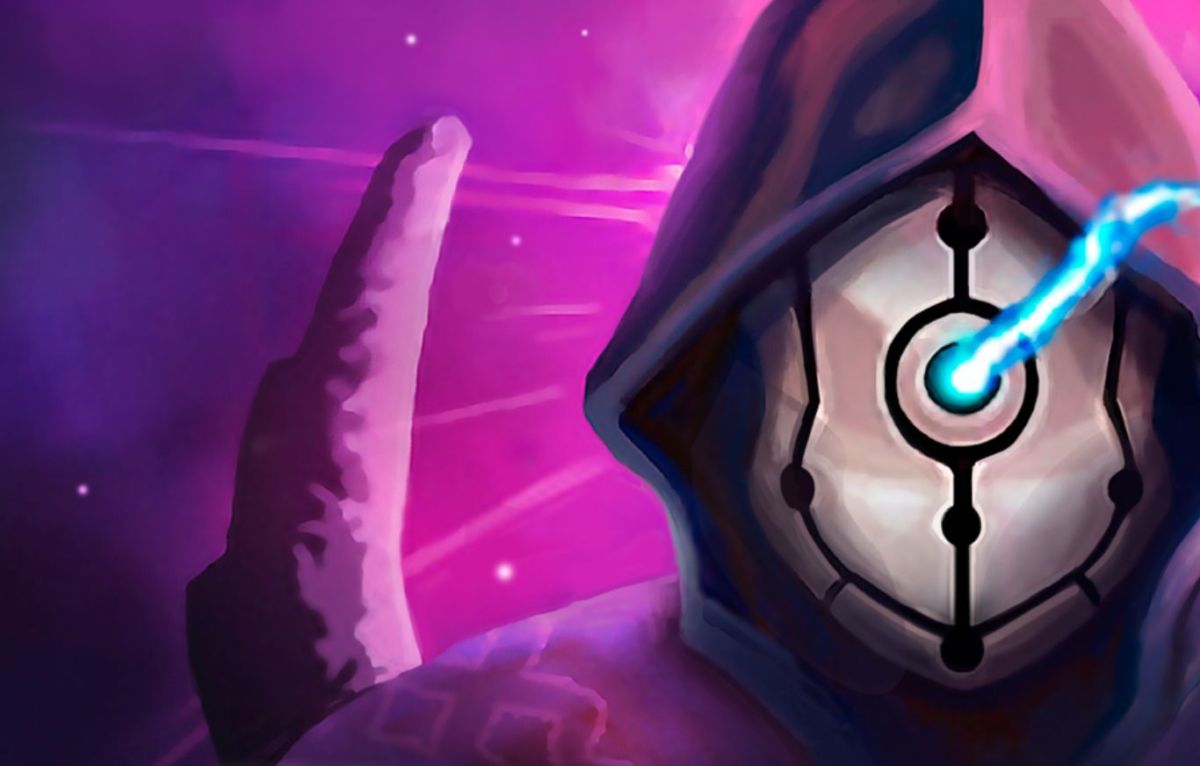 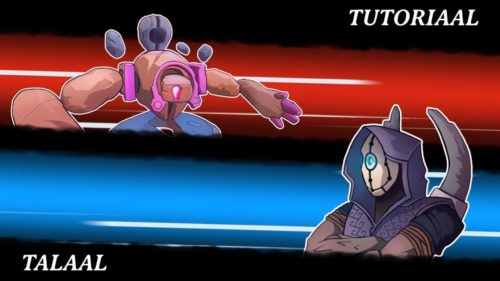 If weaving in and out of a rain of bullets, fire and death sounds like your kind of thing, Profane will be right up your alley – particularly if you’re in a bit of a rush. The aim of the game here is to defeat each boss before your time runs out – the catch here is that every weapon you buy and every hit you take is at the cost of precious seconds from your limit.

The story of Profane boils down to an excuse to slap a bunch of bosses around, one after the other, in a nod to Furi’s action-focused approach. You play as Talaal, the last of God’s seven masks, and you need to fight against her siblings. These less-than-friendly family members want to hunt her to absorb the power within the mask, which means you’ll have to fight each being one by one in their own realm, learning their attack rhythms and fighting back with some sibling rivalry of your own. 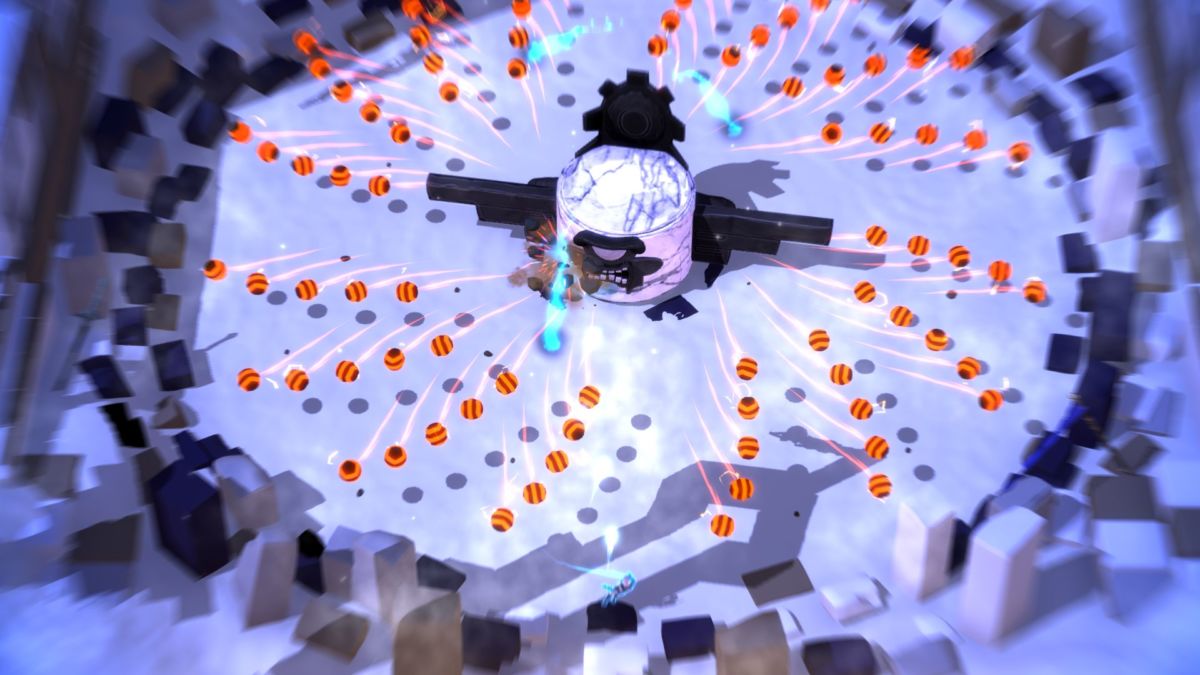 The developers, OverPowered Team, say that they “aim to reach those players that enjoy franticexperiences and beat hard challenges, giving them the possibility of challenging other players and beating the highscores.” The game expects you to hit the ground running with bosses that will quickly overwhelm some newcomers to the twin-stick bullet hell genre.

The unique selling point is Profane’s time-based health system. Time acts as both your durability and your currency for abilities. You can opt for a glass cannon style of play by kitting yourself out with plenty of weapons before you begin, but this is at the cost of fragility. Instead, you can opt to withstand more hits, but you’ll be dealing less damage as a result. You can also invest in enhanced movement skills – the very first one you gain is an instant blink-dash very similar to Furi’s character. 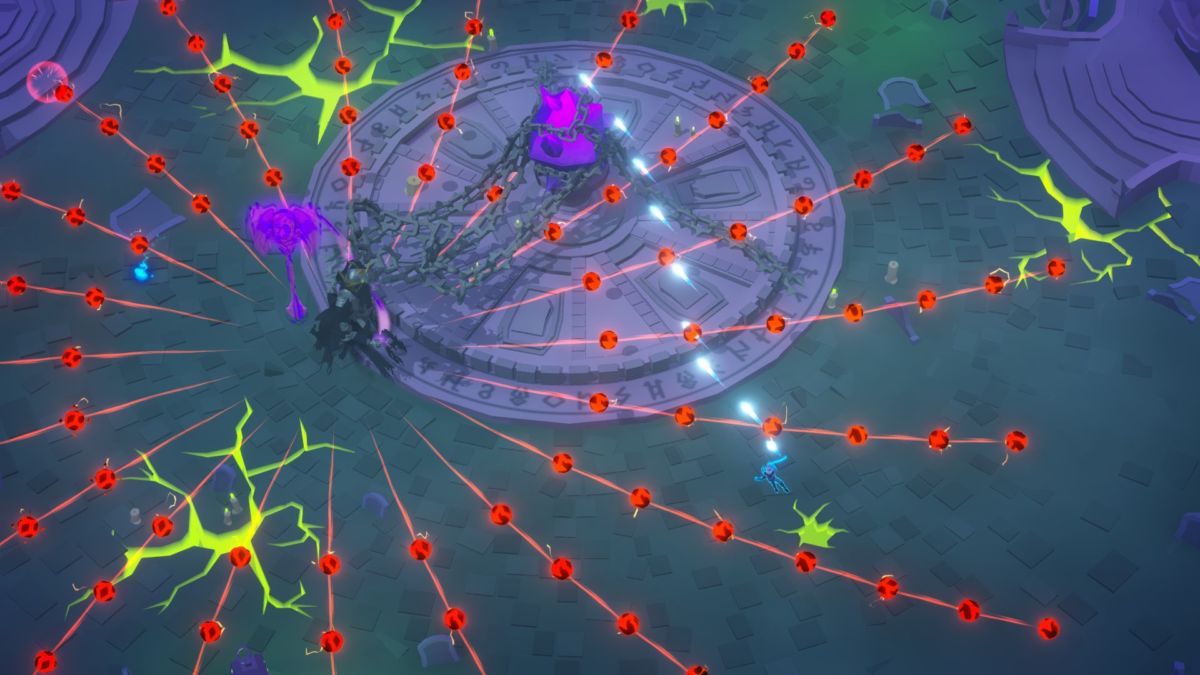 Mercifully, running out of time does not result in an instant game over screen. Instead, you’ll reach a state where you die with one final hit. The colour drains from the screen to let you know just how close you are to biting the dust, and this regularly happens when first learning about new fights. Over time, it’ll become something you’ll get used to, and talented players will be able to navigate boss fights for whole minutes in this state.

As more bosses are defeated you’ll gain more skills which will level out the difficulty of the game. At first, with few to no abilities, the game will feel challenging, but with a loadout you are used to, the challenge becomes less daunting. One of my favourite enemies had to be a floating skull demon, where its first phase involved fighting a still-beating heart within a ribcage that shot bullets in tune to an ever-increasing heart rate. 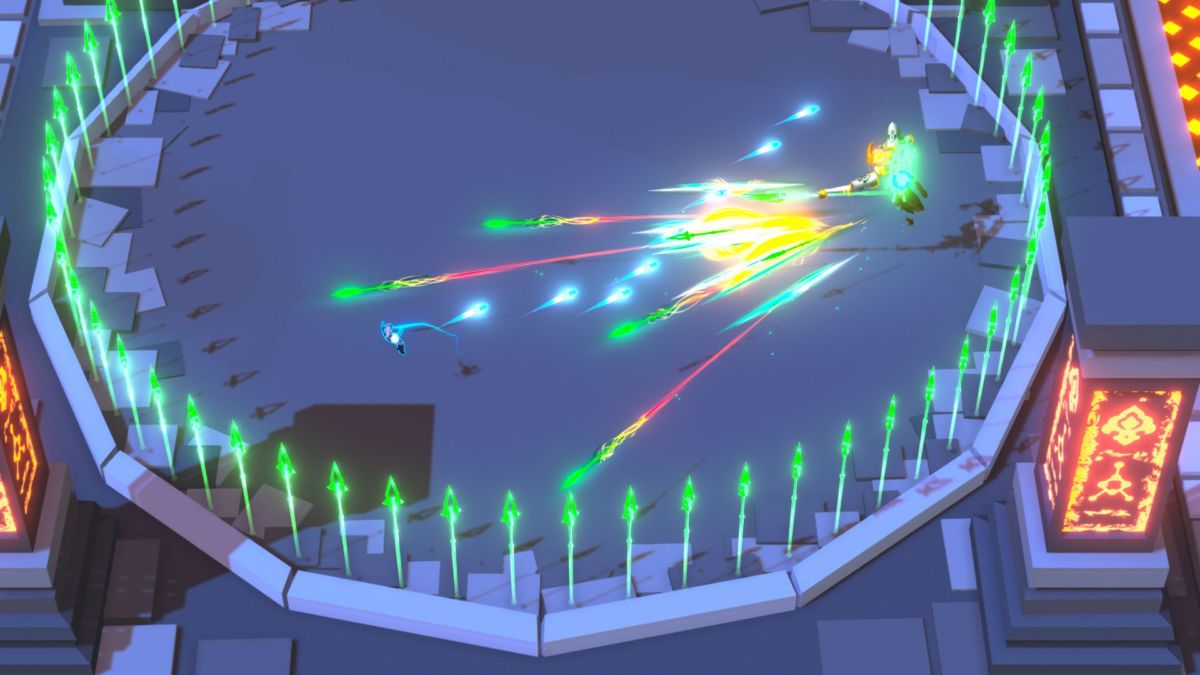 This blend of features comes together to create a gameplay experience that is frenetic and demanding, although suffering a few early hits when first fighting a boss is often enough to spell doom for the rest of the playthrough. There’s no catch-up mechanic beyond collecting energy for your special abilities. You cannot regain time, so if you have a rough few seconds and take several punches to the face, you’re on the backfoot for the rest of the level. This means that if you have a bad start, there’s no point in persevering to the end – you may as well restart and try again.

Unfortunately, the game lacks one crucial thing: mouse support. In a game where precise movements and aiming are two of the things you have to get right, the lack of mouse controls is a severe handicap for a sizable portion of PC players. The only realistic way to play this game is with a controller for the twin stick capability. Don’t even try to play with the keyboard, because trying to aim with the directional keys is a special kind of torture nobody should have to go through. 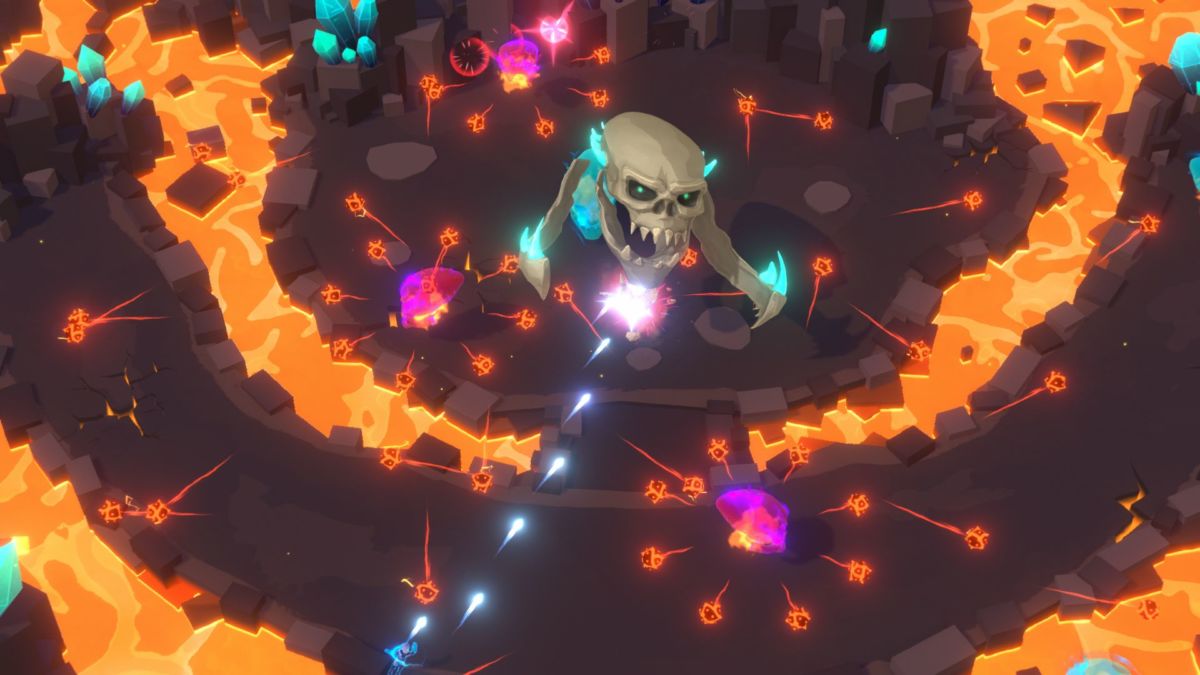 Once the story mode has been completed, there’s also a Challenge and Daily Challenge mode to give the game that much more replayability. These offer roguelike boss runs where you might gain extra buffs or handicaps depending on what you do when you defeat a boss. You might lose one of your passive abilities entirely, or gain the ability to buy an extra talent for a reduced time cost. In these modes, restarting is not an option.

Profane also boasts Twitch and Mixer compatibility. While not tested for this review, the streamer can allow the spectators to participate in voting polls during the stream, resulting in extra perks and handicaps for the player. 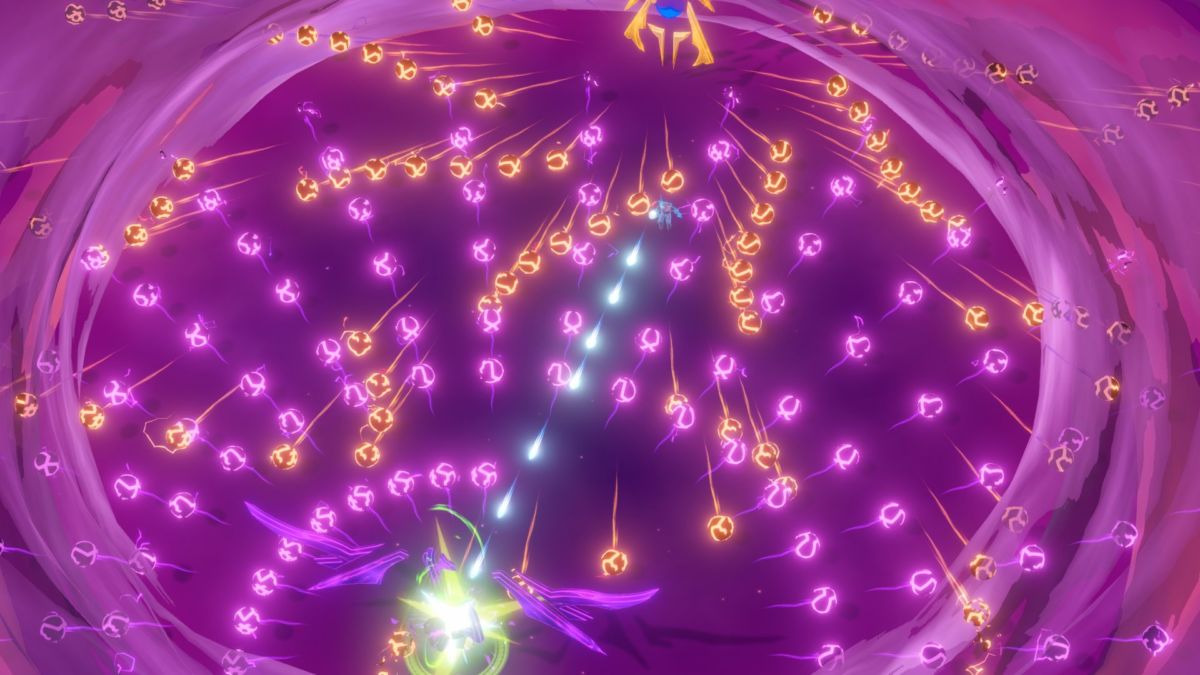 Outside of the gameplay, Profane’s graphics are definitely inspired by Furi, with enemies and environments that feel varied and exciting, and each have their own identity and feel. The music is also suitably epic and ramps up once an enemy is in the throes of defeat, and deserves a mention as well.

I’m not sure if I say this as someone who does not play many shmups, but I feel like the bosses could do with some more telegraphing in the earlier fights of the game. Some of the attacks felt too sudden to adapt to, and sometimes it felt more like an arbitrary punishment rather than something to learn and overcome. I can see some people getting disillusioned with the challenge before even sinking their teeth into the meat of the game.

As much as I enjoyed the style of the game, it could also do with some more polish. Furi’s level design allowed for a small breather as the main character walked through environments that defied physics in favour of some impressive cinematic shots. This game has nothing of the sort here, which leaves it feeling a little bare by comparison to its inspiration.

Profane is a game meant for those who want a challenge, and it will occupy a good amount of hours for people dedicated to achieving perfect runs with no damage accrued. It’s particularly appealing to speedrunners with its emphasis on time as both a currency and as a health bar. It is a rough diamond that is in need of some refining and shining, but still provides a good bullet hell experience.

A copy of Profane was provided by PR for the purposes of this review.

Verdict
Profane is a top-down shmup experience where you use time as a resource and as currency. Despite the lack of mouse support, it will clock up the hours for those looking for their next bullet-riddled hit.
7